What is the HEOS Bar?

Now, HEOS exists as a standalone brand, with a line of products that is separate from Denon’s core hi-fi brand. This is HEOS’s crack at an all-singing, all-dancing soundbar, aiming to handle music as well as big movie soundtracks. It’s rather special, and an effective alternative to the Sonos Playbar – its biggest rival in this market.

If space is tight and you want a one-box audio solution for your living room then this is it – and it’s flexible enough that you can add other components for a wireless surround sound system. 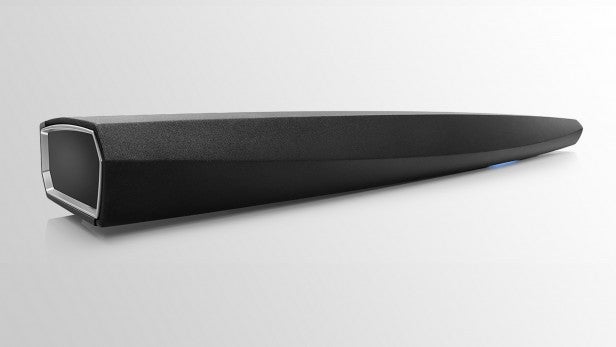 One look at the HEOS Bar and it’s immediately obvious that the brand is trying to distance itself – aesthetically, at least – from Denon. While Denon tends to go for simple, straight lines with a slightly retro look, HEOS is a little more futuristic, displaying numerous angles that wouldn’t look out of place on the back end of a Lamborghini Huracán. It looks striking look from the side, but since the bulk of the construction is finished in black cloth, it isn’t imposing. I like it.

That angular design isn’t just for show, however. The HEOS Bar’s drivers sit at 45 degrees, instead of firing directly forwards, which helps with positioning flexibility. The idea is that you can sit it or wall-mount it beneath your TV and it will fire slightly upwards. Mount it upside-down above the TV and it will fire downwards, rather than shooting straight over your head.

Super-neat is the reversible plaque for the HEOS logo, which is attached by magnets. Flip that and it the soundbar will look upright, no matter which way you install it. 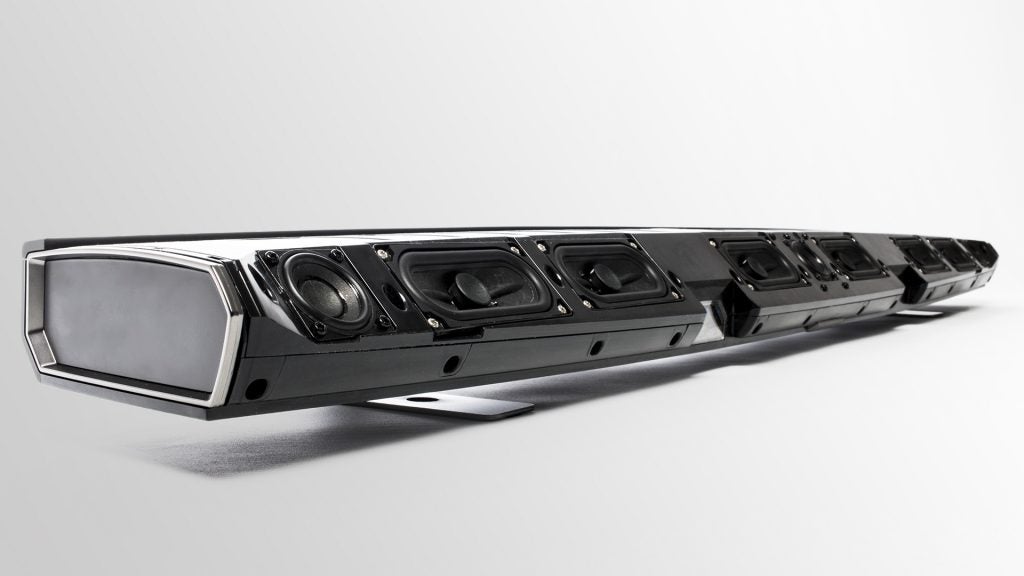 The speaker grille isn’t removable, but if you were inclined to rip it off anyway then you’ll find three channels, each with two mid-bass drivers and one tweeter. On the rear sit four HDMI 2.0a inputs with HDCP 2.2 support. They will pass through 4K and HDR with 4:4:4 colour. I tested this with a UHD Blu-ray of The Last Jedi and the soundbar didn’t so much as stutter.

The HDMI output has Audio Return Channel (ARC) support for feeding sound back from your TV, but if your TV doesn’t have ARC then there are digital optical and coaxial inputs too. There’s also a 3.5mm auxiliary input for analogue sources, a USB port for external hard drives, plus an Ethernet socket for your home network. 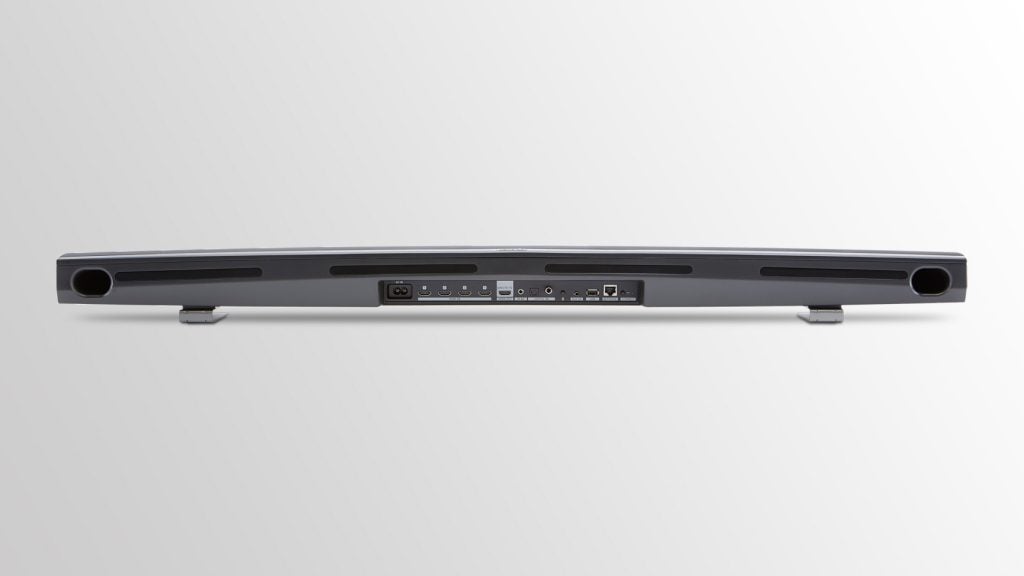 You don’t need to be online to use the soundbar, but it certainly helps with regards to setup and to download the latest firmware. It’s compulsory if you want any of the streaming or multiroom audio features, however. Physical connections are more stable, but if your router isn’t close by then there’s built-in Wi-Fi too.

Soundbars are known for blocking off remotes IR signal to TVs, but the HEOS Bar gets past this by including four IR repeaters round the back. Your TV remote’s signal will get through just fine.

On the inside? The HEOS Bar supports Bluetooth, plus a bunch of online streaming services: Spotify, Tidal, Amazon Music, Deezer, Pandora, Napster, Soundcloud and TuneIn Radio. If you’d rather bring your own music, you can stream from networked storage devices, or even directly from your phone.There is also support for Hi-Res Audio up to 24-bit/192kHz.

The most popular surround sound formats are supported: Dolby TrueHD, DTS-HD Master, Dolby Digital, Dolby Digital Plus, and DTS. This isn’t a Dolby Atmos soundbar, so don’t expect sound effects to be pinging all over your living room. But since Atmos is a backwards-compatible format, your UHD Blu-rays will still work – albeit scaled down to Dolby TrueHD. 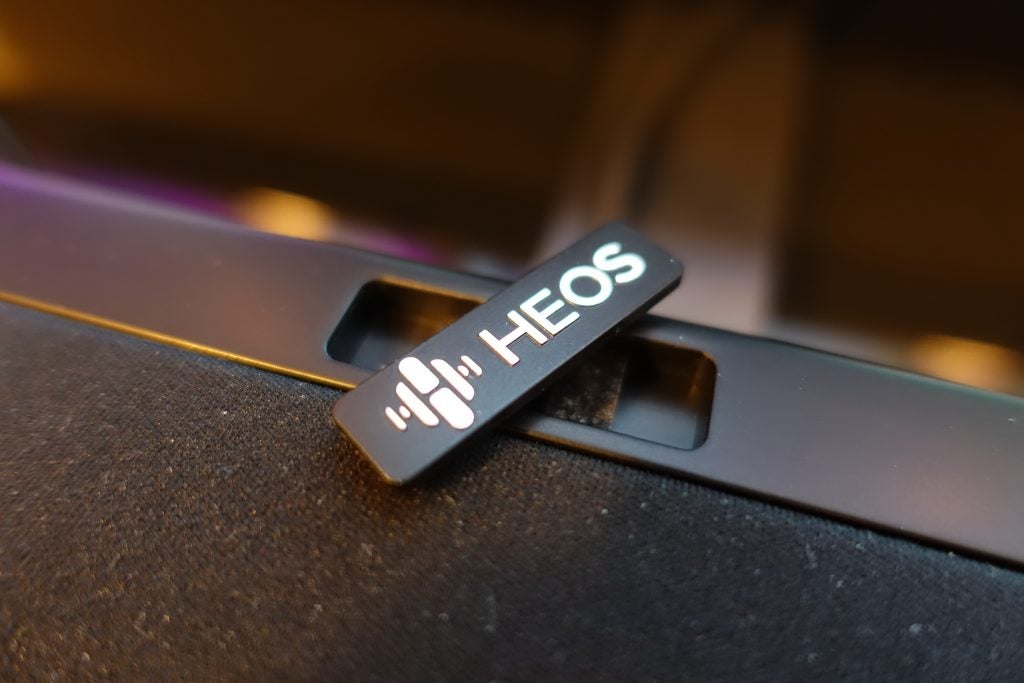 If the HEOS Bar isn’t enough for you, it is possible to add extra components. You can pair the device with the HEOS Subwoofer (£479) for a 3.1 setup, or add the sub plus a pair of HEOS speakers for 5.1. The best thing about HEOS speakers is that you can place them throughout the home for multiroom music playback, then bring them to the living room and pair them with the HEOS Bar for movie night.

The components connect directly to the bar with a 5GHz wireless signal, rather than going through your home’s Wi-Fi. All the components can be controlled by the HEOS app, so you can listen to the HEOS Bar on its own for music, then add the other bits for movie-watching.

Speaking of control, there are a few methods you can use to play with the HEOS Bar. Besides the app, there’s a bundled remote control. It’s a palm-sized unit and a little plasticky, but it’s much nicer than the bubble-button rubbish usually supplied with soundbars. You can also use your TV remote, as well as the few (volume) buttons built into the soundbar’s side.

Bottom line: the HEOS approach to features is the polar opposite of the Sonos Playbar, where you’re supposed to plug everything into your TV, and then pass a single digital optical cable to the soundbar. While setup is certainly neater and easier with the latter, it’s more restrictive. The HEOS Bar feels more like an all-in-one audio device. 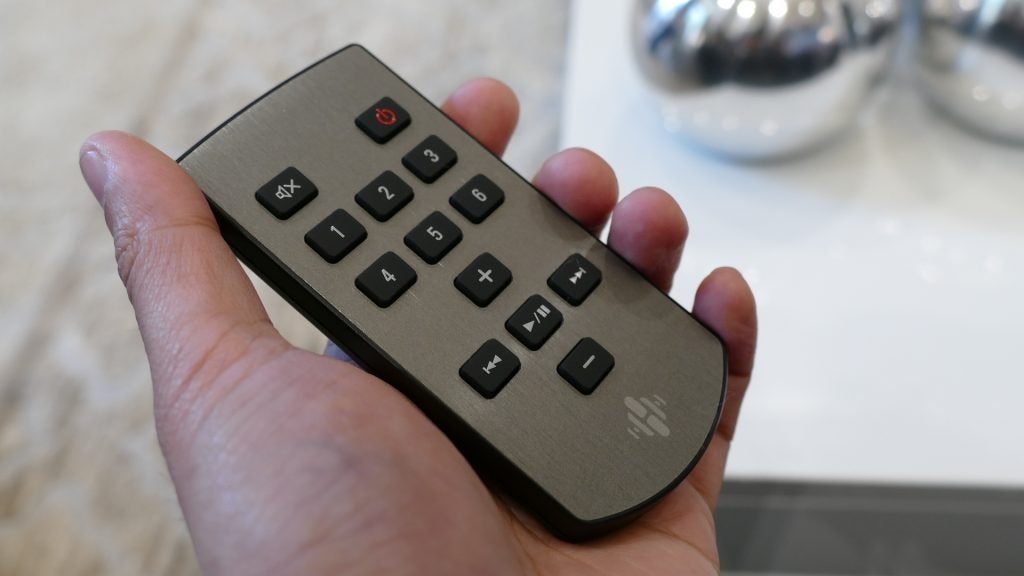 The HEOS Bar sounds terrific. If you’re after a single device to serve your music and movie soundtrack needs then you won’t be disappointed. It’s powerful, eloquent, versatile – and easy to use as well.

The first thing that struck me was the scale of the sound. The HEOS Bar isn’t the biggest soundbar I’ve seen, but its presentation is super-spacious. It easily extends beyond the borders of the 65-inch Samsung Q9FN I’m currently using, although a 75-inch TV might be stretching it. My default audio setup is a large pair of stereo speakers, but the HEOS Bar was almost as good at filling the room.

The stereo image is nicely defined and effects placement is good. With my eyes closed during the opening battle in The Last Jedi, I could determine the direction of laser fire, where things were exploding, where X-Wings were swooping.

It isn’t the level of precision you’d get from a dedicated set of stereo speakers or an Atmos setup, but it’s about as precise as you’ll get from a standard one-box soundbar. If effect steering is your priority, check out the Yamaha MusicCast YSP-2700, which offers a more tailored approach. 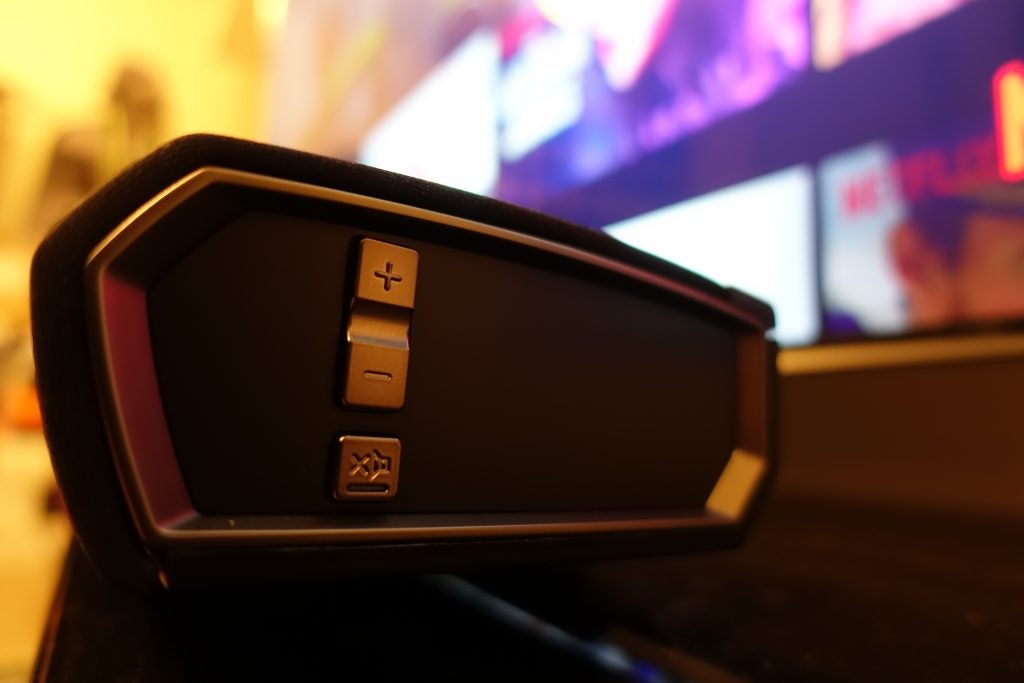 Vocal clarity is also outstanding; that centre channel is put to good use. Even with chaotic soundtracks, dialogue is clear and full-bodied. There’s plenty of detail and nuance, without the forced sensation you get with poorer soundbars. There is a Voice Enhancer feature, which tweaks the EQ slightly, but I rarely felt compelled to have it on anything higher than ‘Low’ – and that’s only on more compressed audio, such as movies streamed on Now TV.

As for music? Listen to Pink Floyd’s ‘Money’ and the cash-register sounds in the intro are presented on the left and right, while the main riff was locked to the centre. Timing is tight enough to get your foot tapping, and there’s plenty of dynamism to get your blood pumping. This is an insightful, entertaining listen. And again, vocals truly excel. If you’re an audiophile and you need your soundbar to double up for music duties, this will do very nicely indeed.

Then there’s the power and energy. The HEOS Bar has the smooth sound I associate with Denon products, but there’s plenty of attack and excitement – more so than the Sonos Playbar, which has a more laidback demeanour. 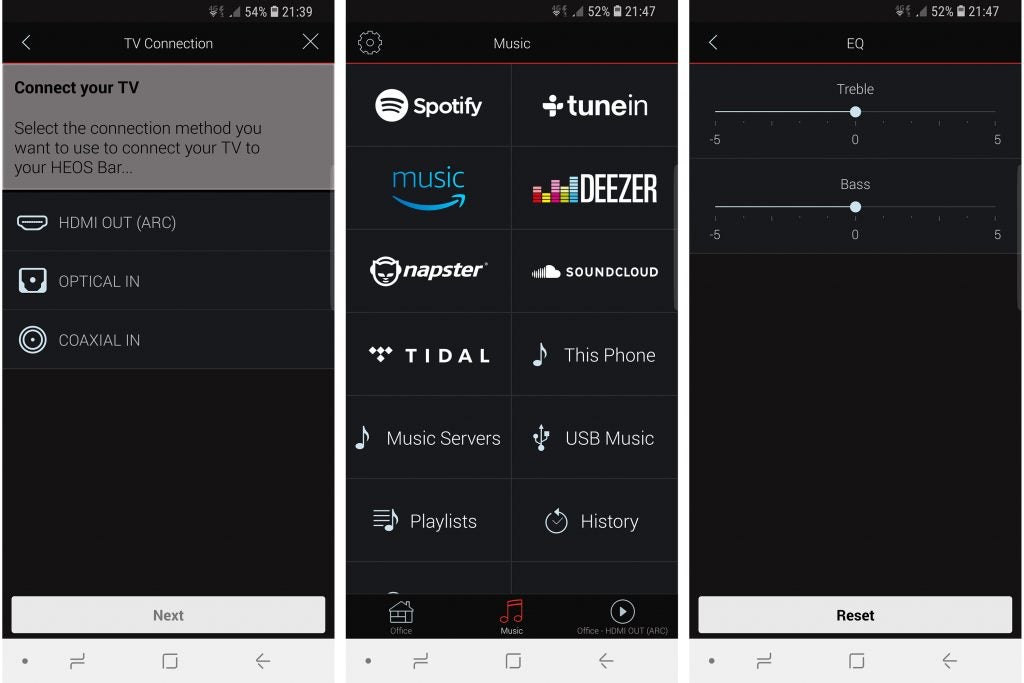 Tonal balance is spot on. The HEOS Bar isn’t bass-heavy by any means, but there’s just enough here that I occasionally wondered if I was going to wake the neighbours. It could do with a little more depth, but I’d rather a product excels in its comfort zone than step out and falter.

I was sent just the HEOS Bar to test, and I’ve concluded that it’s an excellent performer in isolation – but I was also given a demonstration of the Bar in 5.1 configuration. The HEOS Subwoofer certainly packs that extra punch needed to really shake the house and make earthquakes scenes more convincing, while the addition of a pair of HEOS 1 speakers improved effects placement. If you want to feel bullets pinging across the room, you’ll want to consider investing in the satellites.

Remote apps are often overlooked in hardware reviews, but here it deserves a special mention. It’s a real treat to use, to the point that I’d happily use it instead of the bundled physical remote. It’s fast, responsive and easy to navigate.

Even better – and this is something that I’d previously have attributed exclusively to Sonos – it performed with zero hiccups. Not once did the app glitch out on me; every command I entered went through on the first tap. It makes the HEOS Bar a joy to use, and easy to recommend. 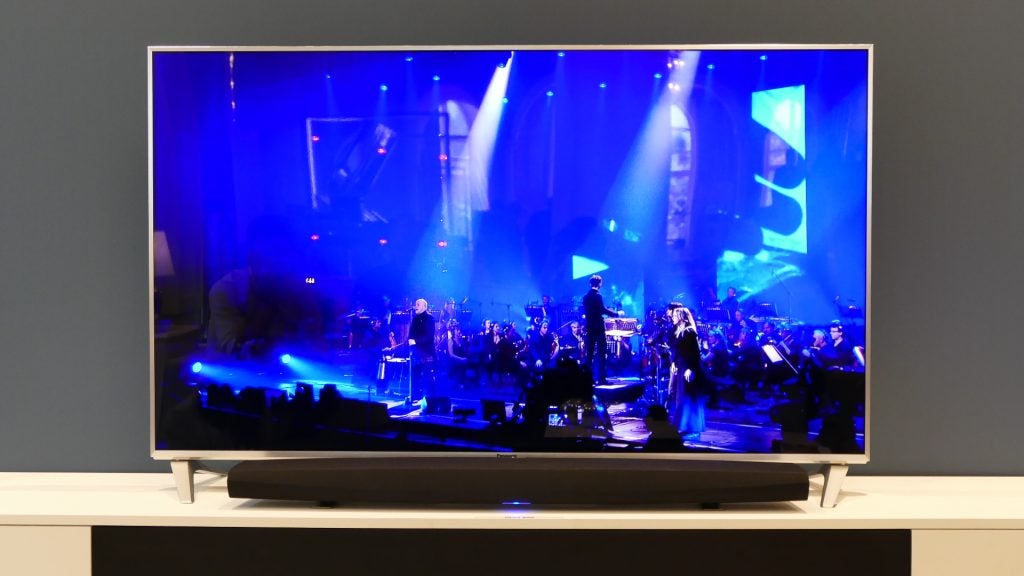 Why buy the HEOS Bar?

Denon has achieved its goal of an all-singing, all-dancing sound system that excels for audio and movie soundtrack reproduction. Factor in the Sonos-like smooth app operation and the competitive price, and this is a product successful in virtually every respect. If you’re looking for a one-box solution to serve as your home’s sonic centrepiece, you’d struggle to find a package that’s more versatile.

Excellent soundbar for movies and music – and it does multiroom audio too.