Channelling the basic plot setup of 1989’s The Burbs and the architecture of a Dr Seuss daydream, Hello Neighbor isn’t a traditional scary game. Pitting player against home security enthusiast AI, it’s been knocking around in some form of alpha build since 2015, and in that time it’s generated quite a following from a community keen to unravel its mysteries. Not just because it deviates from the cookie-cutter horror formula (dark nights, forests, clutter from Tim Burton’s attic), but because its developers are using the drip-feed release of alpha and beta builds to tell a story in a fresh and captivating way.

Originally due this summer, its final build was recently pushed back to December 29, 2017. An ETA slippage is hardly cause for celebration, but at least those extra months offer a chance to make sense of all the religious symbolism, the references to Faust, and the shadow figures in its concept art that seem to hint at a much deeper story than first impressions indicate.

Hello Neighbor might all be leading to a grand and sinister reveal. Then again, it might not. 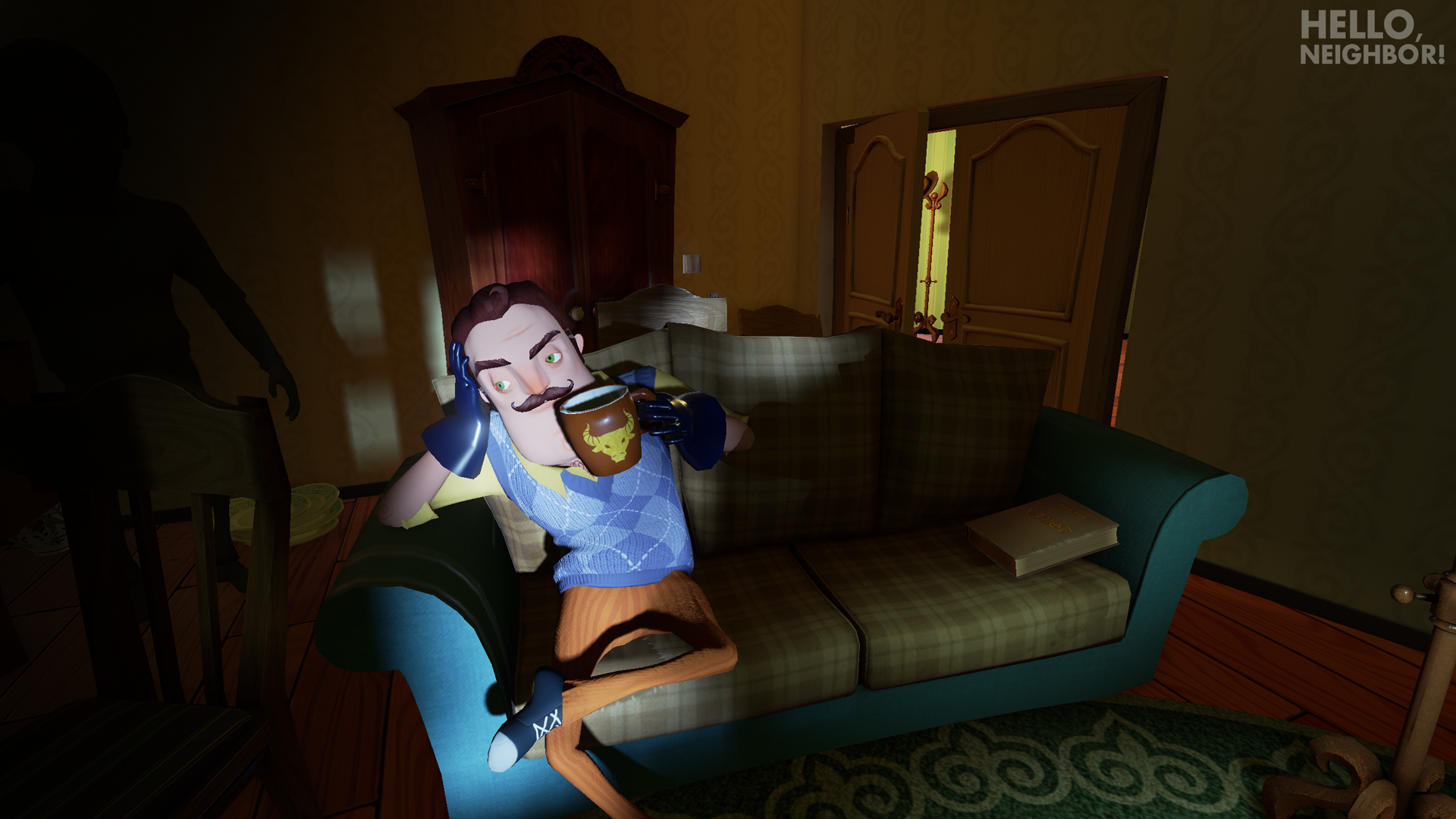 In fact, it’s not even clear who the bad guy is. You begin only with the implicit instruction to investigate the titular neighbour’s house. But you don’t know why, only that there are strange sounds coming from within, and that he seems unusually concerned with privacy. Sure, there’s a patch of newly dug soil in his front yard. And yes, all those bear traps around the place do look a little suspicious, likewise all those security cameras. But is he really hiding something within the grounds, or are you, in fact, the monstrous one, for terrorising the man across the street with your constant home invasion attempts?

That such a fundamental question is left hanging for much of the experience, even in the latest build, says a lot about developers Dynamic Pixels’ intentions.

To strip it back to the mechanics and interactions, Hello Neighbor’s a stealth game with randomly generated environmental elements, and a prowling AI adversary whose behaviour and location can be manipulated by certain cues. The end game is getting inside the house and unlocking a conspicuously well-secured door. Shutting down the power to his house using the circuit breaker on his exterior wall, for example, will guarantee that he goes outside to investigate, and then flip the switch back on. You might take this as an opportunity to climb in through a window and sneak past a security camera that you’ve just cut the power to. Or you might let yourself in through the front door. Or, and this is the most likely scenario, you might flip the switch and then nosedive into a blind panic because he’s headed out much faster than you anticipated and he’s coming after you and oh God he’s right here now please help (etc).

It’s your classic alternating predator/prey setup. At times you feel the master of your surroundings and allow yourself a smirk at how easily you threw your neighbour off the scent, only for the environment to conspire against you and turn the tables in an instant. 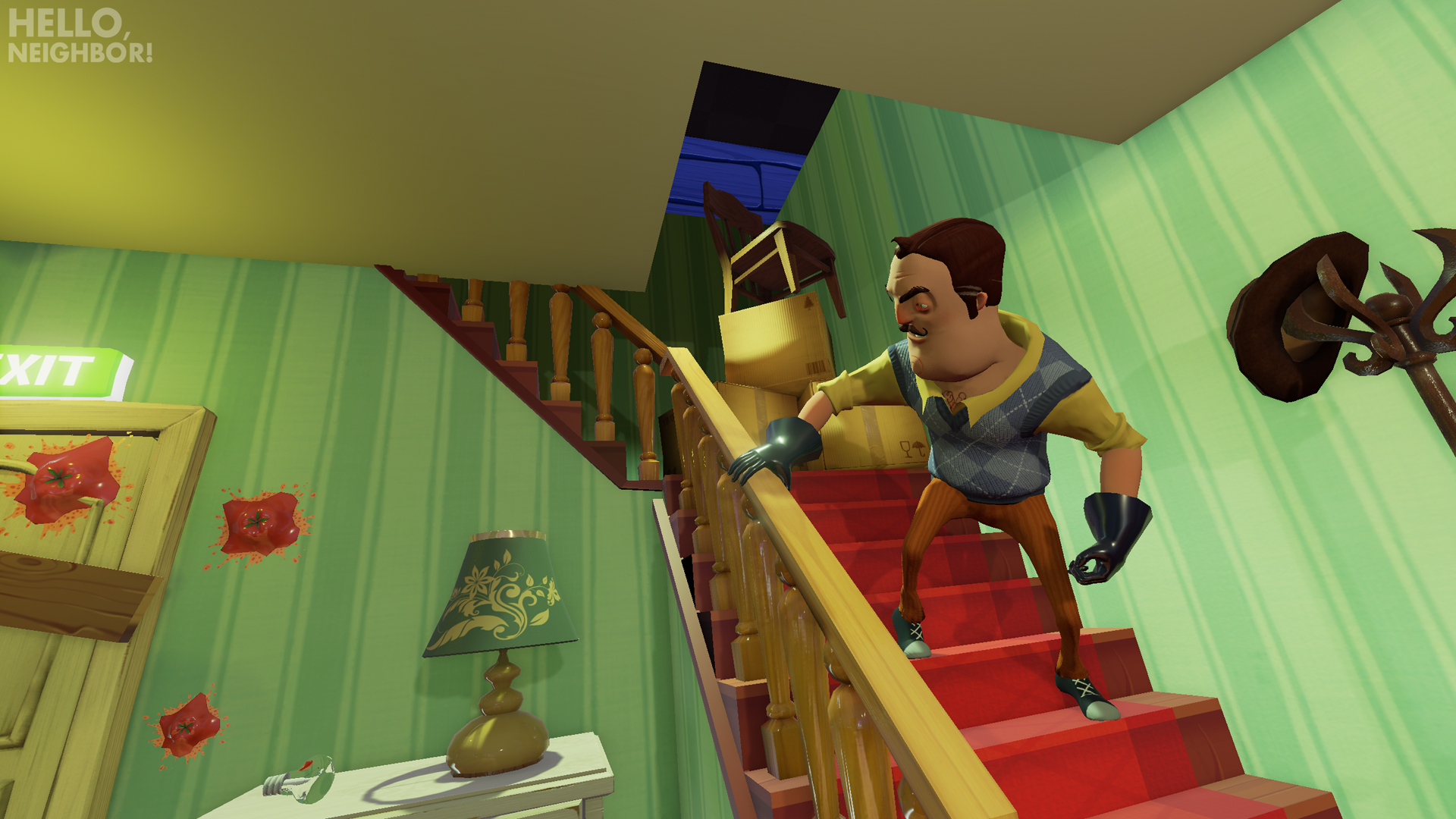 Horror is found in strange places. It’s found in the ‘off-ness’ of the house, which has second-storey exterior doors leading to sheer drops, and interior doors built into the floor. In an earlier alpha build, there was certainly some horror to the slightly sped-up Spanish voice coming from the TV, looping endlessly. There’s horror in the moral ambiguity of it all, too, since you’re essentially roleplaying a home invader. It’s a Twilight Zone kind of atmosphere that never debases itself with a bathtub full of gibs or a monster from a Creepypasta story. It doesn’t need to go to those extremes, because you already feel on edge by being in someone else’s domain, and gradually discovering that this domain makes absolutely no sense. Who has a ladder that ascends four floors, leading to a DIY roller coaster, in their house?

But there’s more to it. Dynamic Pixels hasn’t just created an analog of Alien Isolation in the suburbs, but instead layered a novel storytelling approach over that central frightening dynamic, one that seems to make each new venture into his home scarier than the last. Perhaps you’ll catch sight of the locked and barred door, protected by CCTV, and the idea that he really does have something awful in the basement will take firmer root in your mind. Or perhaps you’ll solve the puzzles required to open that door – opaque, fiddly puzzles – and have things made more explicit.

And then there are the ‘fear rooms’ in which the laws of physics and reality take a coffee break and you’re left to navigate what feels like a child’s nightmare. What’s especially unsettling about these areas is the tonal shift – wasn’t this a game about investigating your neighbour’s house? Why did throwing an apple into a gramophone transport you to this surreal dimension? Never breaking its inscrutable mute narrative style, Hello Neighbor is at its most telling in these rooms (of which Dynamic Pixels says there’ll be several more in the final build). Without laying it all bare here and thus ruining the experience, fear rooms encourage you to feel some empathy for the enigmatic neighbour, as well as changing the pace of its gameplay by going from slow and considered stealth to something approaching a platform game. Albeit one populated by disconcerting mannequins.

And the strangest thing about it all is that you could probably play Hello Neighbor for hours without ever realising there was anything more to do than creep around in someone’s yard, looking for ways to get inside and working your way into new rooms. As The Game Theorists’ excellent series of plot analysis videos amply demonstrate, its developers have put an awful lot of time and effort into tiny references and details you could easily miss, but which seem to add up to one illuminating whole. Without cannibalising the aforementioned videos here, there’s some weight to the theory that your neighbour sold his soul to the devil himself. And, even more chilling, he might not be trying to keep outsiders out of his basement as much as keep them safe from what’s within it. The floating, apparently glitched-out version of the neighbour in an earlier alpha, who has a tiny ‘666’ written on the sole of one shoe, tells you what an eye for detail Dynamic Pixels has when it comes to fuelling fan theories.

It would be completely understandable to spend hours playing without ever stumbling on any of its secrets, too. There’s a strong whiff of the NES era, ‘How would you ever know to do that?’ about its design, and that makes it equal parts fascinating and frustrating. Were it not for YouTube, the secrets of each alpha and beta build so far might have remained at arm’s length to many players.  Then there’s the haphazard quality to your interactions with the game. That makes those secrets and solutions feel even further away, even more of a chance revelation.

It’s harsh to pull up Hello Neighbor on its mechanical clunkiness. It’s pre-final code, after all. But if you want to get anywhere, narratively or geographically, you must contend with floaty jumping physics, unpredictable object behaviour, and make peace with the very likely eventuality that things will clip and glitch all around you at times.

To use an early game example, one of many methods of entry requires that time-honoured physics puzzle, stacking some boxes to form a rudimentary set of stairs, and then throwing something small through a vent at a lever. The boxes are jittery enough that you might assume you’re on the wrong track after a couple of tries. Even after creating a sufficiently sturdy box stairway, throwing a large object like a broom won’t trigger the lever however you angle it. That’s another juncture at which you might conclude the lever can’t be switched this way, rather than that you’re simply throwing the wrong type of object. Doubling down on that earlier sentiment though, this is pre-release code, and issues like this come with the territory.

Related: The Evil Within 2

Perhaps the greatest mystery of all, more than what your neighbour’s really up to, is what the final game will contain, and to that end Dynamic Pixels’ latest update video tantalises with its details. Beta 3 offers around 40% of the final game, it transpires, and the producer’s phrasing – one boss, one basement – suggests we might still only be scratching the surface.

Horror gets a bad rep for leaning too heavily on the old cliches and formulas, but Hello Neighbor is using its pre-release builds to tell a story and create a world in a novel way.

The question is: when the curtain’s pulled back in the final version, can it offer something more engaging in its conclusion than the teasing, tantalising alphas and betas have?