Here’s the good news. Hellboy: The Science of Evil is the best comic-book to movie to game tie-in of the summer. It’s both more playable than Iron Man and more polished and interesting than the Incredible Hulk. It makes some attempt to stay faithful to the tone of Hellboy, and it features vocal performances that don’t sound like they were phoned in while the actor was doing something more interesting, like clipping their toenails or watching the home shopping channel. And while it’s a staggeringly unoriginal piece of work, The Science of Evil does at least take its cues from God of War and Devil May Cry. If you were a Hellboy fan and you bought it, you probably wouldn’t come away feeling that you’d completely wasted your hard earned cash – though you might come away feeling that the development team could have made more of the license. 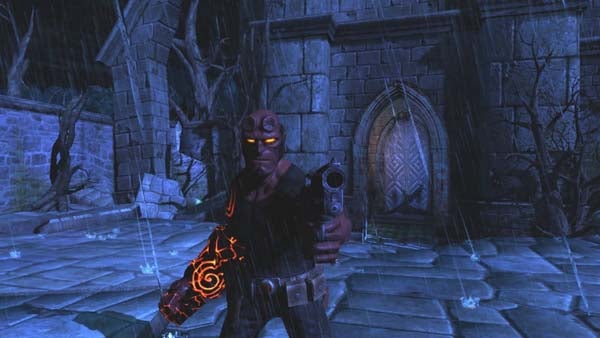 It probably helps that the talent behind the comic-book and the movie – Mike Mignola and Guillermo del Toro – were prepared to get involved in the game’s production, as was the cinematic Hellboy, Ron Perlman. As a result, The Science of Evil tells an all-new story distinct from Hellboy or Hellboy II: The Golden Army, pitting the amiable red-skinned demon against an unholy combination of witches, Nazis and assorted eldritch horrors, with a quick soujourn against Japanese nature spirits for good measure. The plot isn’t all that engaging (or even coherent) but there are some witty lines well delivered by Mr Perlman, and at least you don’t feel like action sequences are being shoehorned in to make a video game work from an existing plot (see Iron Man, The Incredible Hulk, The Bourne Conspiracy and an awful lot of other movie tie-ins I could mention). 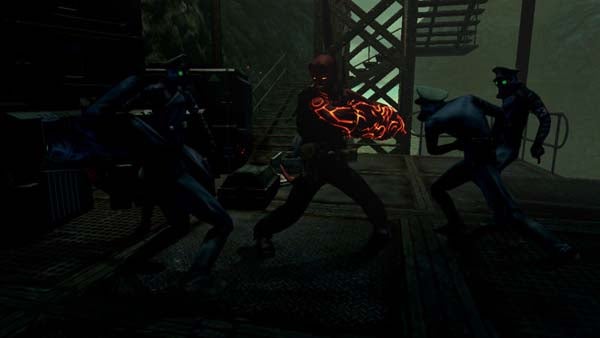 The other thing developer Krome has got right is the combat system. Like God of War, The Science of Evil goes heavy on large-scale brawling, and while the fighting isn’t as fluid as it is in Sony’s epic or Devil May Cry or Ninja Gaiden, it certainly isn’t a disaster. The X and Y buttons bring in light and heavy attacks with the legendary Right Hand of Doom, just as you might expect. These can then be chained together to scatter imps, trolls or robots like so many nine-pins, but you can also use the right trigger to grab enemies, then either throw them, smack them or press B to unleash a finishing move that might leave you with something to throw or an offensive weapon. Crates, barrels and miscelaneous bits of masonry can be picked up and thrown around, while occasionally more heavy-duty melee weapons can be grabbed and brandished. Finally, Hellboy also has his trusty handgun – the Samaritan – which can be loaded with several different types of ammo and fired using the left trigger, with the right analogue stick used to switch targets. The result is a game where you can still get by with a little button mashing, but where a little more finesse produces some more satisfying and effective manoeuvres. 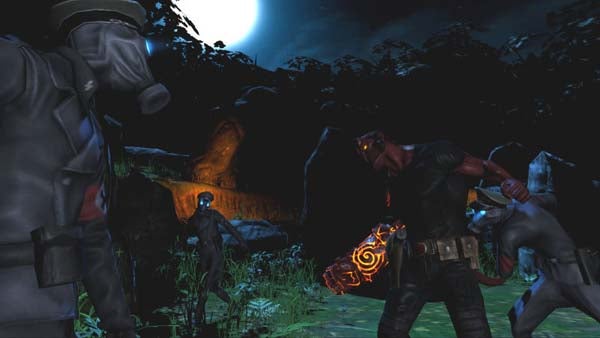 In short bursts, all this is a reasonable amount of fun, and while Krome has thrown in the odd, very simple puzzle here and there, the game generally plays safe by throwing wave after wave of attackers at Hellboy during every step of his journey. And here’s where things begin to go wrong. God of War and Devil May Cry both work because the developers have a deep understanding of pace. They know when to throw in the big brawl and when to mix things up with a more challenging one-on-one encounter. They know when to ease the tension off a little, when to throw in some puzzles and how to keep upping the ante from one battle to the next. The Science of Evil shows little of this, and as a result it can get a bit monotonous. You don’t need to change strategies or even think much to get through most of the game; merely alternating X and Y will do most of the job for you. Worse, certain sections of the game seem to go on forever, with similar encounter after similar encounter after similar encounter. I’ve had worse times playing games, but I’ve also had much, much better. 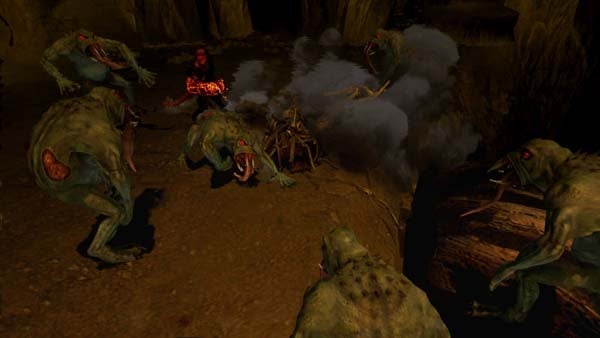 I think the art and design teams have to take some of the blame here, too. God of War and God of War II were masterclasses in how to surprise players with different locales, build atmosphere with architectural detail and wow the gamer with impossible scale or stunning scenery – and all that on a humble PS2. Devil May Cry 4 managed much the same trick with its weird baroque fantasy on the 360 and PS3. The Science of Evil has its great moments, but it also has a lot of bland, more-of-the-same backgrounds, whether spooky Romanian villages, pastoral Eastern landscapes or gloomy caverns. Effects like mist, lightning and wet surfaces are used well, but close-up some of the textures or creature models look blocky or primitive, and few of the monsters show much in the way of design flair. Visually speaking, then, this is a bit of a mixed bag, veering towards the mediocre. By the time you’re halfway through the game you’re not all that fussed about what’s coming next, simply because what you’ve already seen wasn’t all that impressive. 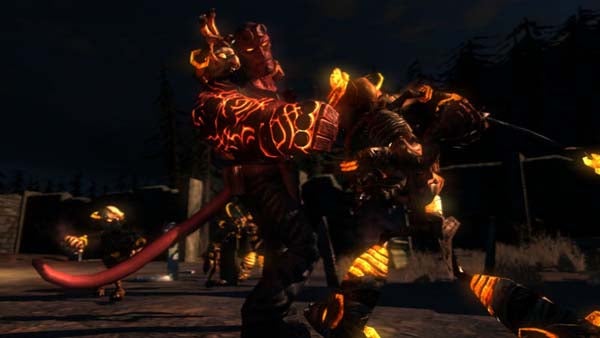 The final big negative is difficulty. I suppose things would have been worse had Hellboy taken the Ninja Gaiden 2 hardcore only approach, but most of the time this is a game that any player worth his or her salt will waltz through. You can comfortably play for a couple of hours without dying once, and only one difficulty spike – an absurd battle against a giant Nazi ape – caused me any real headaches. As you can tell from my Ninja Gaiden 2 review, this wasn’t because I’m a hugely skilled gamer, and I suspect that anyone who has played a God of War or Devil May Cry will have a similar experience. 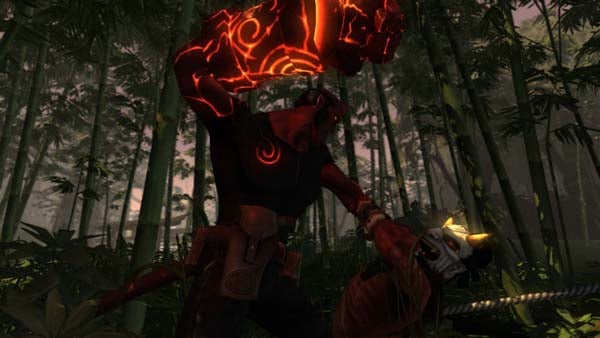 And there you have it. Hellboy: The Science of Evil is the best super-hero movie tie-in of the summer, but that still doesn’t mean that it’s a particularly good game. If you were a huge fan of the movies and the comic-books then you’d probably get enough of a kick out of it to make it just about worth buying. Meanwhile, anyone desperate for a fix of action might – in these lean times – consider it as a rental. Otherwise, however, it’s another slightly mediocre game you can safely ignore. Nothing more or less than that.


A reasonable action game tie-in, but one that shows little of the rich imagination seen in the Hellboy movies or comic-books. Unless you’re a fan, you can safely skip the Science of Evil.