Media Center PCs have been around a while now, and there’s no better all-round tool for recording, watching, listening to music and downloading media. But not everyone has the cash to go out and buy or build a second PC to put in their AV rack, and it isn’t always the greatest idea if you want the ultimate in quality or reliability either.


The alternative is to buy a network streamer so you can access downloaded and ripped video and music stored on your PC while still being able to play your CD and DVD collection. But at this point most people’s AV racks would be creaking, and again that issue of quality is always likely to raise its head. I haven’t yet seen a dedicated network streamer that’s capable of matching a decent DVD player for quality, and the same goes for music playback. 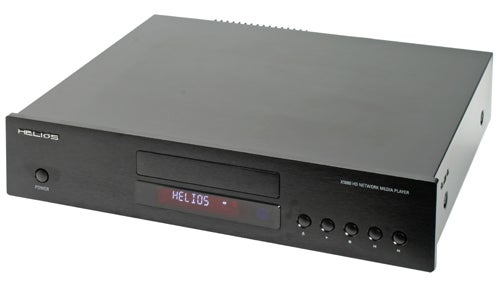 Helios thinks it has the answer. Build a player capable of combining all these functions, and concentrate on sound quality and picture quality at the same time, and customers will happily replace those three boxes with one. That’s the theory at least, but can the X5000 live up to such lofty ideals?


It certainly seems to on paper. This is a DVD player that will upscale video to 1080p, a network streamer (wireless and wired) and ‘audiophile’ CD player all in one; a box designed to streamline your AV rack without degrading the quality of your viewing and listening experience. And the X500 does all this for a mere £300. Surely there must be some weakness at such a low price.


There are no such shortcomings evident in the build quality, however, and here at least it does a pretty good impression of a high-quality AV component. Where most modern DVD and CD players below the £500 mark are built from lightweight aluminium or thin and flexible steel panels, the X5000’s chassis is built like the proverbial battleship, with a rigid and heavy chassis that doesn’t rattle at all. The front panel is hewn from a single slab of thick black aluminium with a top-quality brushed finish, and the whole thing is admirably well put-together. This, on its own, is impressive given the lowly price tag. 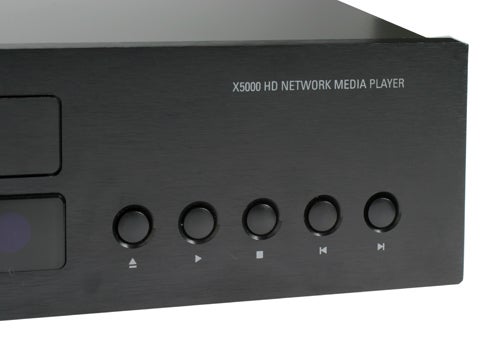 Under the hood the list of components, at least from an audio standpoint, is impressive. The X5000 uses a high-end Wolfson DAC, Burr Brown op amps in the pre-amp output stages, ‘audio grade’ capacitors (though no manufacturer is specified) – and an R-core linear power supply, which is at least a better bet than the switching affairs you get in cheaper gear. Don’t confuse the latter with the hand-wound and toroidal transformers you get in more serious audiophile equipment, however.

Taking a look at the rear of the device reveals a decent range of connection options too. For HD video output there are HDMI and component connections, coaxial and optical digital audio outputs for multichannel sound output to a home theatre receiver, and analogue stereo phono outputs. There’s also a couple of standard definition video outputs in S-Video and composite provided, though if you’re using these you’ll be missing out on the X5000’s upscaling and high definition capabilities. More interesting is the presence of a couple of USB ports – one at the rear and one on the side – which can be used to add hard disk storage or connect an MP3 player or flash drive. 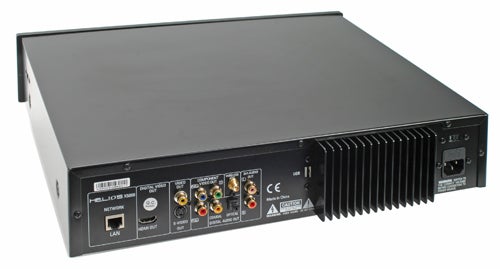 Its list of capabilities is also pretty good. There’s support for most types of video file – MPEG1, 2 and 4, TS and TS HD, VOB, WMV9 (including HD), plus SD and HD DivX files – with the only major omission being H.264. On the audio side, the player supports everything you could possibly want: MP3, WMV, Ogg Vorbis, AAC and – a bonus – the open source FLAC codec, which lets you compress your CDs and store them on a hard drive with no loss of quality over the original. What you can’t do for this money, of course, is watch HD-DVD or Blu-ray discs on it, which is hardly a surprise.


Of course, in addition to DVDs and CDs, the X5000 is designed to access shared media on your home network and it does this out of the box using Helios’ own Neolink server software. This is fairly basic, but I liked the fact that it syncs your web browser’s bookmarks (IE or Firefox), which you can take advantage of via the built-in web browser. The good news is that other media server options are supported, including iTunes and UPnP, so you can use pretty much whatever you fancy. Network connection is achieved using either the onboard Wi-Fi 802.11g or 10/100 Ethernet adaptors. 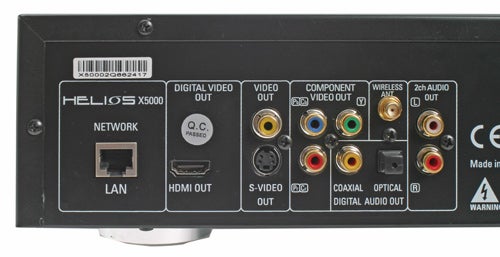 It’s a capable machine, clearly, with a lot of features stuffed in for your money – but the rose-tinted glow that surrounds the X5000’s spec sheet, soon fades to a dismal grey once you turn it on. The main problems with it are twofold. First, it’s a right royal pain to set up. I couldn’t get a wireless connection at all with it until I realised that it only operates on channel 11 – and with no indication of this in the menus or manual, it took a good root around on the website to find out what the problem was.

There’s no automatic detection of your video source either: to get any sort of picture displayed at first, unless you’re lucky enough to hook up a source that matches the X5000’s default, you have to keep pressing the TV Modes button on the remote until you hit upon a match. Even then, in order to get the player to remember the setting the next time you start it, you have to use another menu to set yet another option. 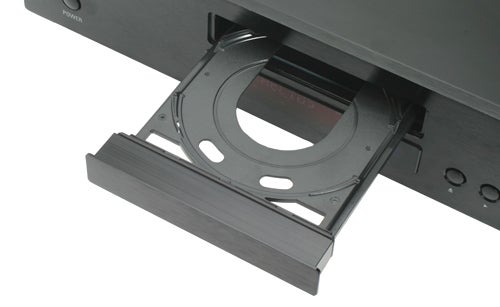 Second, it’s not particularly stable, with lock-ups and forced restarts an all-too common occurrence. Audio in particular will begin to break up for no apparent reason – usually while flicking between tracks, though flicking is a generous description as navigation in general is pretty sluggish. To make matters worse, each time you have to restart the machine, you have to wait a minute or two while the thing boots. And there are other irritations too: there’s no track number display on the front of the machine while playing CDs, and the music navigation capabilities are weak – you can’t browse your music and video libraries while listening to a track playing in the background, for instance.


The good news for the X5000 is that audio and video performance are both excellent. For comparison, I set it up next to my Denon 1920 upscaling player, which can boast not only upscaling but a DCDi video processing chip from Faroudja. I must say was impressed with the results. Colours and detail in general were just as good on the X5000 as they were on the Denon, which is an excellent performer in this respect. The bamboo fight scene from gorgeously shot and produced House of Flying Daggers came across beautifully, with all those greens and hazy lighting effects looking suitably realistic. 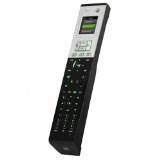 Full 1080p HD over Wi-Fi isn’t possible on an 802.11g connection, but 720p DivX HD files can often be played successfully, as long as you limit other Wi-Fi network traffic while you’re playing back files. Over Ethernet, however, both 1080p and 720p file formats playback flawlessly and picture quality is just as impressive as it is with SD media. Those who prefer to stick to stereo output for their movie watching will also be pleased to discover that the X5000’s video processing chip is nippy enough to eliminate the synchronisation problems that afflict many other DVD players. To check this I hooked up the HDMI cable and analogue audio outputs at the same time to compare the outputs and could hear only a very slight echo-effect – something that is more pronounced on my Denon.

The only area where the X5000 falls down is on edge smoothing, which the DCDi processor in the Denon is particularly good at. Load up something with lots of crisp edges – Finding Nemo, for example – and jaggies become apparent on the output of the X5000. It’s a small issue, however, that only the most picky of viewers will be bothered about, and other than this it’s a very capable upscaling player.


Despite the claims of audiophile performance, the X5000 can’t compete with a dedicated CD player of £200 or more, but again it stacked up pretty well against the Denon, which has pretty good audio output, and was certainly far more accomplished than either the Netgear HD EVA 8000 or the Freecom Network Media Player 350 I looked at earlier this year. 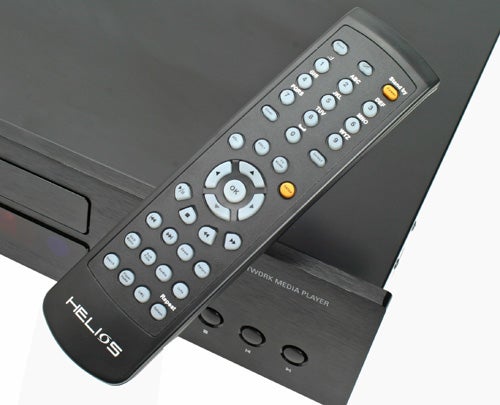 Jazz tracks from Stacey Kent’s The Lyric album sounded clear and precise, but with good stereo imaging and instrument separation. Bass is a little over-enthusiastic, with a loss of control evident in bass heavy tracks such as those found on Nitin Sawhney’s Beyond Skin, but overall there’s very little here not to like.


Any product that can do as much as the Helios X5000 can for less than £300 is bound to be a bit of a compromise, but here things that normally suffer in other products – build quality, sound quality and picture quality – are actually very impressive.


If it hadn’t been for the setup, usability and stability issues, I’d have given this product a big thumbs up. As it is, I can only say buyer beware – this is a product whose good points are balanced by plenty of very annoying ones.