Available on PC, Android and iOS

Whenever Blizzard releases an expansion for any of its eSports titles – WOW, Starcraft 2, HotS and, yes, Hearthstone – one has to marvel at the developer’s meticulous attention to detail. Every Blizzard expansion – and game come to think of it – rolls off the assembly line balanced to the hilt. Given that the addition of new units/powers/heroes in an eSports game can completely change strategic dynamic, the Blizzard’s additions look mind-boggling brave on top of everything else.

The Grand Tournament, Blizzard’s latest expansion for its virtual card battle game Hearthstone, throws something of a curveball at players. Here are 132 cards whose primary purpose seems to be to shake things up while maintaining the level playing field necessary to make the game accessible to all. It’s a hard ask for any developer of any strategy game – especially one so invested in the eSports space. 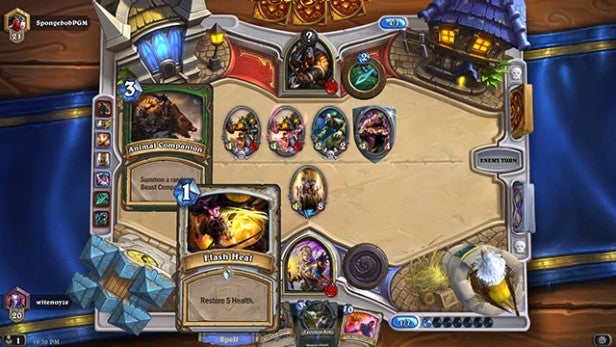 There’s also the fact to consider that a large number of the cards in The Grand Tournament are absolutely bonkers. In a recent interview with TrustedReviews, Hearthstone’s Senior Designer Mike Donais said that the team behind the new expansion still found some of the new cards ‘scary’ and that debate had raged about whether or not to tinker some more with them. However, Blizzard eventually decided to release them into the wild in their non-nerfed form to see how players experimented with them.

This could be a good or a bad thing. As with the game’s last expansion, Goblins vs Gnomes – and indeed, with the Classic set – there’s every possibility that some new cards could end up gathering dust or being disenchanted for crafting dust when they land in a player’s collection. It’s likely that over the coming months, though, that the massive player base (Blizzard puts Hearthstone’s numbers at around 30m) will sort the wheat from the chaff. 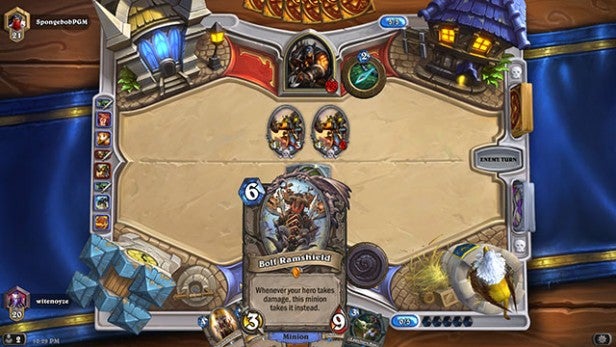 Before delving into the nitty-gritty of certain cards and how they’ll be best used or effect established strategies, it’s worth noting the two biggest new features The Grand Tournament expansion brings two the table: ‘Inspire’ and ‘Joust’. Minions with the Inspire power trigger abilities every time a player uses their Hero’s power. For example, if you put a Kodorider (a 6-cost, 3/5 minion) in play, every time you use your Hero power, it summons a 3/5 minion.

Additionally, Inspire can act the same as a Taunt, especially if you put other cards in play like Maiden of the Lake (a 2/6 minion that reduces the Hero costs 1 mana), Garrison Commander (which allows players to use their Hero power twice in one turn) and Coldarra Drake (which allows players to use their Hero power any number of times – although only if they’re Mage class). Opposing minions aren’t forced to attack an Inspire minion the same way they have to attack a Taunt. However, the benefit of using a lot of the Inspire cards is so high, opponents will usually work to take them out of play as quickly as possible. 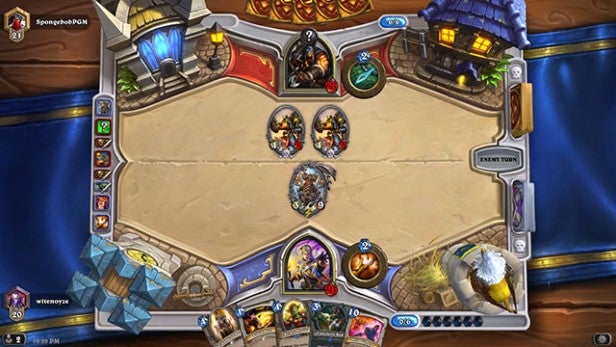 Joust cards prompt both players to draw a random card from their deck; if the players who just tossed their Joust card onto the table draw a card with a mana cost higher than that of their opponent’s, their minion gains an edge. For example, once Master Jouster (6-cost, 5/6 minion) is put in play, both players draw cards and if the player who player Master Jouster wins, their minion gains a Taunt and a Divine Shield.

While this sounds like a neat gimmick, it actually allows players to put more high-cost/high-damage cards in their deck than before. Players who favour high-cost minions have more of a fighting chance with Joust cards; a zoo deck, or a deck like Warrior-Grim-Patron, that rely on getting low-cost minions into play as quickly as possible aren’t totally stymied, but they’ll lose most ‘Jousts’.

Well, in theory, at any rate. A lot of the time players will find that the Joust mechanic doesn’t really give them that much of an edge in the face of a sustained attack. Unless played with high-cost cards and low-cost splash-damage cards Joust doesn’t really remove a player from the backfoot. At least, that was our experience; it’s possible that there may be a bunch of pro-players out there building decks around this mechanic, but until we see them, we remain to be convinced. 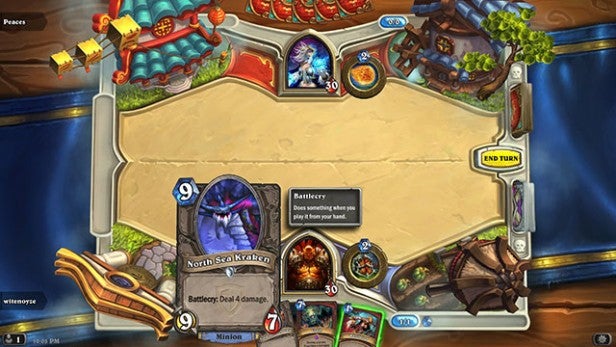 The overriding themes that run throughout The Grand Tournament are chaotic unpredictability and whacky fun. Some cards are powerful enough to prompt stomach contractions when they’re played (North Sea Kraken, Acid Maw and Frost Giant leap to mind). Others’ ability to frustrate and run interference (Tournament Medic, Saboteur and Chillmaw are good examples) and with some one wonders why they were created in the first place (seriously, who the hell is going to find a use for Novice Squire aside from one-turn cannon-fodder and there are better options for this already!).

Crucially, though, while The Grand Tournament some new weapons to the
arsenals of Hearthstone players, one doesn’t have to buy into the new
expansion in order to ensure victory. It’s worth being aware of the new
cards and what they can do, sure, but their inclusion in your deck isn’t
essential. You just might find that a tried and tested approach needs
to be tweaked somewhat.

Verdict
The new expansion accomplishes, really, what all expansions should; it presents new challenges to the game’s players while keeping things fresh throughout.