Update: Hazro has discontinued the glass front for new revisions of this monitor. It has been brought to our attention that, in some cases, the glass of this model may become detached due to an inadequate attachment process, which in turn presents a potential safety hazard. Therefore we would recommend that anyone looking at buying the glass version of this display be cautious of this possible issue.

If a 24in monitor’s 1,920 x 1,200 isn’t enough pixels for you and your budget or available desk space won’t stretch to a 30in like the NEC MultiSync LCD3090WQXi, a high-resolution, 2,560 x 1,440 27in is the perfect compromise. Hazro has a whole range of new entrants to this market, and we’re taking a look at the most affordable model, the HZ27WC. This gets you a glass-fronted, LED-backlit, IPS-panel display with stereo speakers for under £400, which is frankly amazing value in anyone’s book. Read on to find out if this is the best-value high-end monitor around. 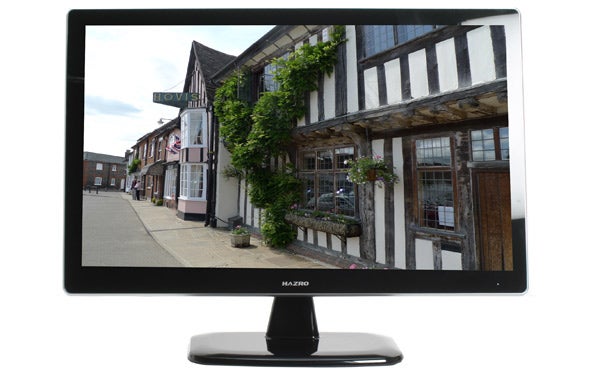 First off, let’s clarify the HZ27WC’s position in the Hazro 27in range. Hazro doesn’t have a model that is everything for everyone (like Dell’s U2711, the larger sibling of our award-winning UltraSharp U2410), though its selection will certainly cater for the majority of users. The HZ27WB is a CCFL- rather than LED-backlit monitor in a snazzy metal frame that’s fully adjustable, and it utilizes 10-bit processing for its matt panel allowing it to cover the AdobeRGB and 110 percent of the NTSC colour spaces. It’s the most professionally oriented of the lot and arguably the most desirable. However, it lacks inputs other than a single dual-link DVI port, and doesn’t do any scaling within the screen.

Next we have the HZ27WA, which is a very different beast. It shares the same plastic chassis and glass front as the HZ27WC and is also LED-backlit, though panel processing is still at 10-bit compared to the HZ27WC’s 8-bit. Nevertheless, both these models only cover 72 percent of the NTSC colour space. Where the A model really stands out is in its extensive connectivity (including HDMI and component) and dual scalers, allowing you to connect consoles and other devices that can’t output at the panel’s high native resolution. 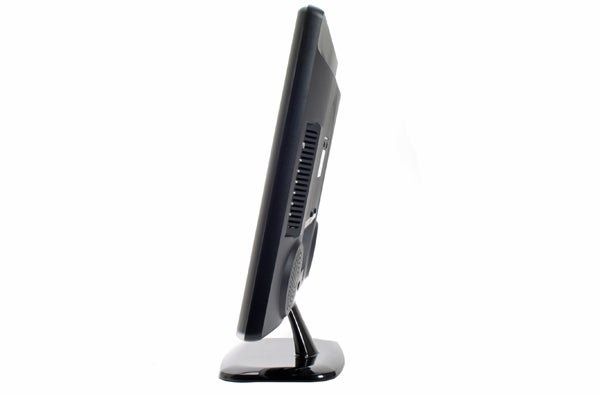 The HZ27WC is considerably cheaper than either of these, and indeed the cheapest high-resolution, IPS-based, 27in display in the UK by a large margin. Thankfully it doesn’t particularly look the part, thanks largely to its glass front. In fact, its borderless, uncluttered design lends it a vibe almost on par with the Apple Cinema Display when viewed from the front, though this impression is ruined if you look down to the cheap plastic stand or around the thick plastic sides.

Unfortunately, looking cheap isn’t the stand’s only drawback. It also doesn’t allow any adjustability beyond tilt, a hallmark of budget displays. Looking at the display from the side, the thin strip of silver plastic framing its glass section gives way to a dull matt black plastic, and this isn’t exactly the slimmest of monitors. 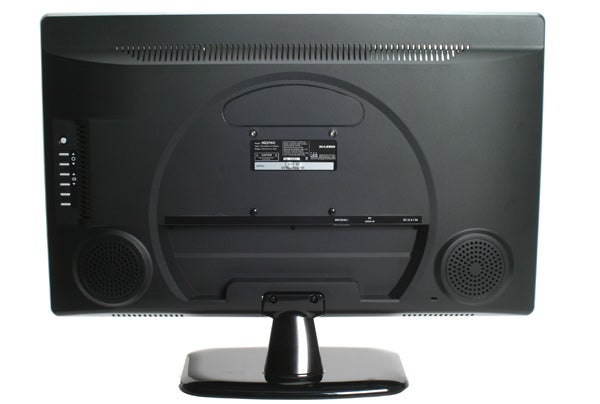 However, it’s worth keeping in mind that even if you were to spend £80-odd on a fully adjustable VESA stand, the HZ27WC would still come out as a decent bargain. We’ve also been informed that Hazro will be bringing out an optional adjustable stand for its 27in monitors within the next two months.

Build quality is good throughout. Despite an alarming amount of creaking when making tilt adjustments, all the plastics used feel solid and there’s a large amount of metal in the stand and base.

Connectivity is one of the sacrifices that have been made to get the HZ27WC’s price point so low, and for a PC user who doesn’t need to use the display with other devices, that’s absolutely fine. Thus all you’ll find around this Hazro’s rear is a dual DVI port for video and 3.5mm jack to carry audio from you PC to the speakers. Here you’ll also find a proprietary connector for the external power brick. We would much rather this had been integrated, especially since it’s a rather large affair (60 x 40 x 135mm). Hazro provides all the necessary cables, including a dual-link DVI and 90-degree-angled 3.5mm cable.

As already mentioned, the entire front bezel of the monitor is kept clean, aside from the Hazro logo and a tiny, unobtrusive power LED, which is blue when the screen is turned on and red when it’s in standby. The power button and other controls are found around the monitor’s back.

This is where we come across our second example (after the stand) of some serious corner-cutting: only the top four buttons offer any feedback, as the lower two are just dummies – a carry-over from the HZ27WB, which offers more functions. Added to this, that feedback isn’t particularly good, and your fingers don’t automatically fall on the right buttons. It’s not a big issue but certainly doesn’t make you feel like you’re working with a premium product. 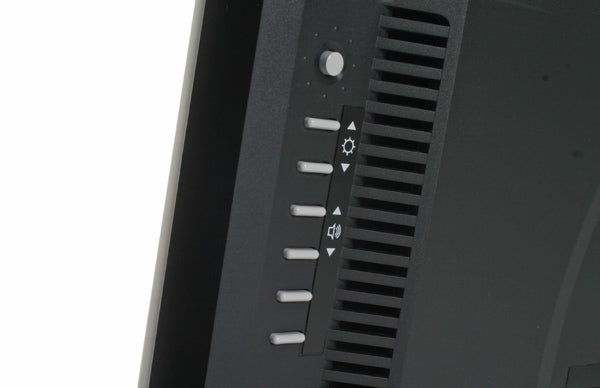 The four working buttons function solely as brightness and volume up/down. There are no other adjustments, no scaling and no processing. Thus there’s no OSD either: this Hazro is a PC monitor in the purest sense of the word, and all adjustments need to be made through software. This restriction is shared by the ‘professional’ HZ27WB, so if you want something that can deal with other sources, the HZ27WA is your only choice from Hazro at 27in.

Before we get onto image quality, let’s check out how the audio side holds up. Encouragingly, the speakers are the largest we have seen on a monitor and their wattage rating of 5W is higher than the usual two or three. Indeed, they get pretty loud; the problem is they don’t do so with much refinement. There’s distortion in the bass at even close to maximum, though if you keep volume levels to about half this is avoidable. 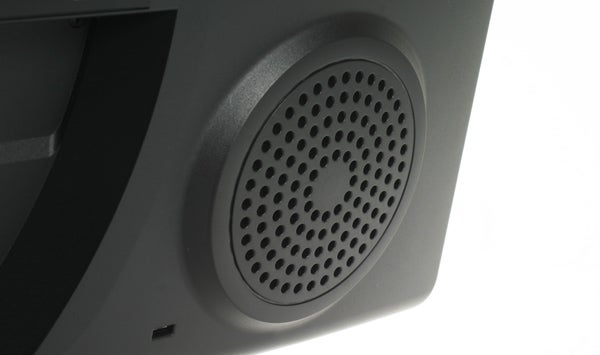 Even then a general lack of clarity and presence prevents them from being star performers, and as they’re rear-firing you’ll want to put the monitor near a wall to reflect some of that sound back. With all this in mind they’re still decent for casual movie watching and gaming, but we wouldn’t recommend them as your sole entertainment audio source.

Now it’s time to get to the most important element of any display: its image quality. As already mentioned, the HZ27WC sports a 27in IPS panel with a whopping resolution of 2,560 x 1,440, which is just below that of a 30in display and 60 percent higher than a Full HD (1,920 x 1,080) display. In other words, it should be adequate to keep even the most pixel-hungry users happy. This specific panel is an S-IPS manufactured by LG, and is the exact same one that can be found in the Apple Cinema Display and Dell U2711 (the bigger version of the award-winning UltraSharp U2410).

Hazro’s decision to go for a glass front gives mixed results. It looks great and helps to protect the screen while improving perceived colour intensity and contrast, but it does turn the display into a bit of a mirror when ambient light is present. It’s a personal preference with advantages and drawbacks either way, though we would probably choose a matt finish. 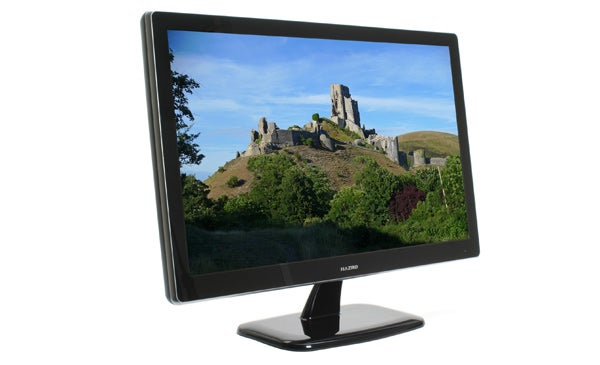 In theory, the HZ27WC’s IPS panel should ensure superb viewing angles, good contrast and excellent colour accuracy. Unfortunately, in this case the white LED backlighting doesn’t do it too many favours, despite allowing an unusually high brightness rating of 420nits. For one thing, there are some noticeable uniformity issues on the bottom left and right corners that give blacks a distinctly greyish cast – though at least there is no noticeable bleed. For another, even at its minimum the backlighting is a tad too bright for the deep blacks we ideally like to see. Contrast shift also seems to be more of an issue than with previous IPS displays we have looked at.

At this point it’s worth noting that Hazro sends out review samples through resellers, so this monitor was not ‘cherry-picked’ to represent the best you can expect. The above problem will vary between different models in the same series, and we reckon this is a worst-case scenario. Still, it is disappointing to find it to such an extent at all. It was pretty obvious that the HZ27WC display was not aimed at imaging professionals from the get-go (with its limited NTSC colour space being but one reason), and this quality issue pounds the last nail into that coffin. 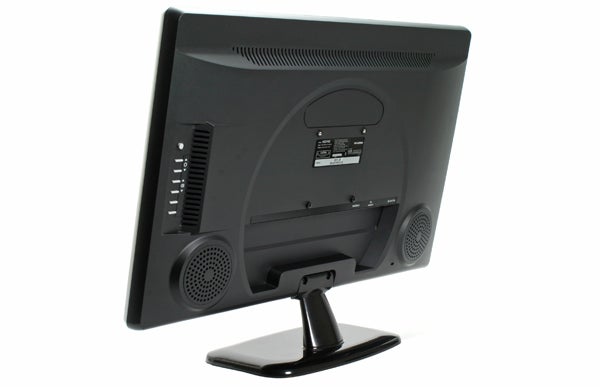 Thankfully, things get better from here on out. Colours were indeed accurate and, taking the uneven backlighting into account, colour shift was virtually nonexistent. Gradients were nice and smooth without banding or the artefacting that TN panels tend to suffer from. Contrast was good too, with every last greyshade being distinctly visible while maintaining good white differentiation. In other words, you’ll get to see all of the fine detail in movies, games and photos. Sharpness is of course also excellent, with that ultra-high resolution squeezed into a relatively small panel giving a tiny dot pitch of 233.

All but the most demanding gamers should also be reasonably happy with this display. While it won’t match a fast TN panel with its 6ms response time, its lack of conversion, scaling or additional processing means input lag is minimal, while ghosting and trailing is well within acceptable limits. It’s also a delight to play titles at such a high resolution, though you’ll need a graphics card that can keep up.

In terms of energy usage, it’s a little higher than we had hoped, hovering around 60W after calibration. However, this is still significantly less than a similarly-sized CCFL-backlit monitor would consume.

Overall then, the HZ27WC does offer a lot, but it’s not without its share of flaws. Luckily, its competitive price keeps these from being critical, as – for now – it really has no competition at its £400 price point. The next cheapest alternative is Hazro’s own HZ27WB, which will set you back around £500, or a dual-monitor setup. Also, if you’re looking for a glass-fronted, LED-backlit or sRGB colour-space display, it’s the only alternative to Apple’s £800-plus offering.

If you’re looking for something a little better connected, the HZ27WA will set you back an extra £150, which also includes scaling and 10-bit colour processing. Though if you’re paying more anyway, another £100 on top of that will get you the Dell U2711’s height adjustable stand, matt panel finish, wider colour gamut, and more advanced OSD.

A glass-fronted, 27in IPS monitor with a stunning 2,560 x 1,440 resolution for just under £400 seems almost too good to be true. But while it’s not without its flaws and the odd cut corner, that is exactly what Hazro provides. If you can live with the slight drawbacks of its LED backlighting, it’s a bargain.