If there’s one thing the critical reaction to Haze proves, it’s that if game reviewers enjoy the juicy steak of a great AAA title, they love the taste of an overcooked turkey even more. Free Radical – the team behind TimeSplitters – promised us a game of cinematic visuals, a rich, revolutionary storyline and innovative gameplay. Instead, after numerous delays, we have a game that looks unworthy of a next-generation platform and that features some of the least progressive gameplay of any FPS so far this year. 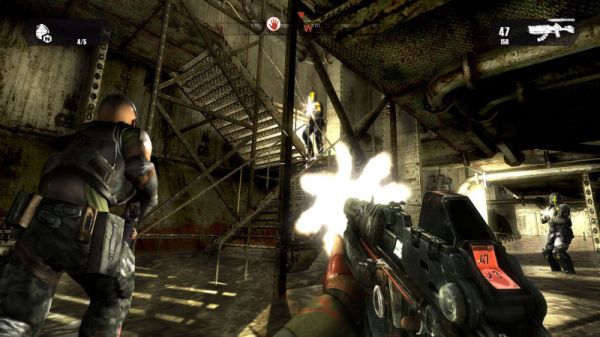 Haze isn’t quite as awful as some of its worst notices might claim, but by no benchmark is it a great 3D shooter. Nor does it succeed in its more lofty ambitions. If this was supposed to be the action game that made you think twice about what you’re doing in action games, then bring back Marcus, Dom and the cheerfully brutish cast of Gears of War.


The first disappointment comes with the graphics. When I first saw Haze running, I thought we might have the PS3’s answer to Crysis. Now it doesn’t even look a match for Halo 3. The jungles you might have seen in the demo level are arguably the best environment in the game. Throughout, the character modelling and animation is more fit for comparisons with B-listers like TimeShift or Turok than A-list games like Half-Life 2 or Gears of War. 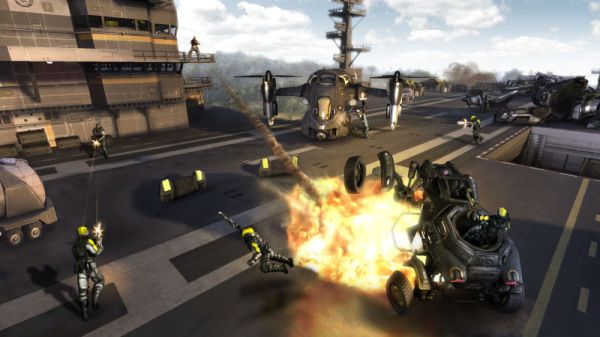 Haze can and does look good, when the lighting comes together and the textures look convincing in the heart of a peasant village or the shattered remains of a hotel. Yet much of the time the graphics flitter between mediocre and plain awful as an engine tuned down to run at 576p presents us with some of the most wretched, low-detail surfaces you’ve seen on an HD console, and some of the blandest, brownest scenery you’ll have witnessed since the not-so-glory days of Quake 2.


Still, eye candy isn’t everything, right? Well, trust me; Haze’s gameplay does not make up for the lack of it. It soon becomes apparent that the feature you’ve all heard about – the fact that you’re a futuristic soldier, working for the sinister Mantel corporation and empowered by the use of a performance boosting drug called Nectar – is a red herring. 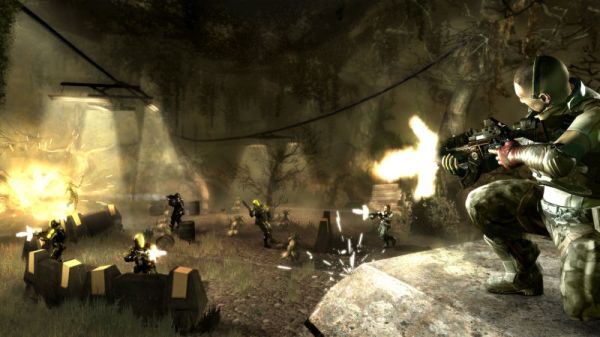 Using Nectar produces one of the game’s nicer visual effects – blurred vision, glowing enemies and distorted colours – but its impact is fairly minimal. You can see enemies better, you can sense the impact zones of grenades, you heal faster and your melee combat attacks are tougher, but that’s it. If the exosuit in Crysis made you feel like you could face the North Korean army single-handed, Nectar leaves you with the vague sensation that you might have a better chance of surviving a rough night out in Nottingham – a bit like a red bull and double vodka, then.

What this leaves you with is a deeply average FPS with very little that you haven’t seen done better in Halo 3, Half-Life 2 or Call of Duty 4. Enemy AI is weak and Free Radical appears to have lost the ability to construct interesting levels with challenging choke points, set-piece fire fights or tactically interesting encounters. Instead, you sort of wander from one bunch of enemies to the next, shooting them when they’re kind enough to pop out from behind a barricade or wander into your line of fire.


One section seems to merge into the next without leaving any real impression, and the vehicle sections thrown in do little to improve the general run. In this respect, Haze can’t even compete with Halo 1, let alone Halo 3. And, please, aren’t we all past the ‘find the switch to open the door’ stuff yet? 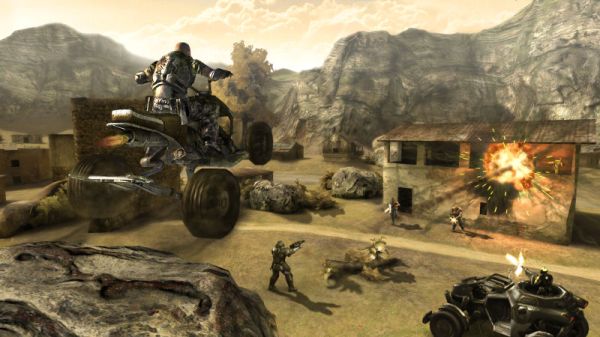 It does get better. The ludicrously telegraphed switch of side from Mantel trooper to rebel brings with it the loss of your Nectar abilities (you won’t miss them) and several new skills that make the game a bit more interesting. You can confuse your former allies, now deadly enemies, by shooting the Mantel administrator on their back or creating Nectar grenades that emit a cloud of the stuff. Overdosing on the stuff, they’ll then happily fight amongst themselves.


You can also lay traps by inserting grenades into the ground (how this works on stone, steel or concrete is one of the game’s many mysteries). It’s also at this point that level design picks up a little, as you face some tense confrontations in the wrecked hotel or fend off a Mantel attack on the rebel village. For the odd moment here and there, Haze actually does feel genuinely exciting. 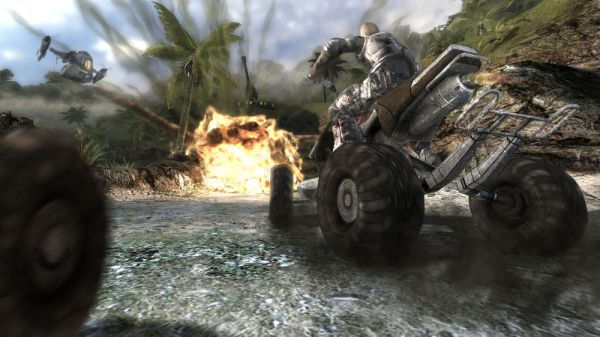 But there’s always something to stem that sensation. Whether it’s one of those limp ‘destroy that tank’ exercises that even Medal of Honor has grown tired of or the sheer number of times you’ll hear the same five or six phrases repeated by Mantel or rebel troopers, you can’t help thinking that Haze is – for a massively hyped, oft-delayed, so-called PS3 showcase title – a little bit amateurish. Who on Earth thought that this stuff would pass muster after last year’s wave of great shooters? Has anyone at Free Radical played an FPS since TimeSplitters 3?


Meanwhile all those cinematic elements that could have been the game’s saving grace turn out to be more parts of the problem. It’s all hugely well meant and clearly deeply felt, and I can see the ideas and the ironies and the story arcs in place. All the same, the emotional experience you’ll have won’t be one of self-questioning or profound understanding – it will be boredom, annoyance and a desire to mock. The big moments are fluffed by poor staging, woeful acting or bad writing, and frequently all three. 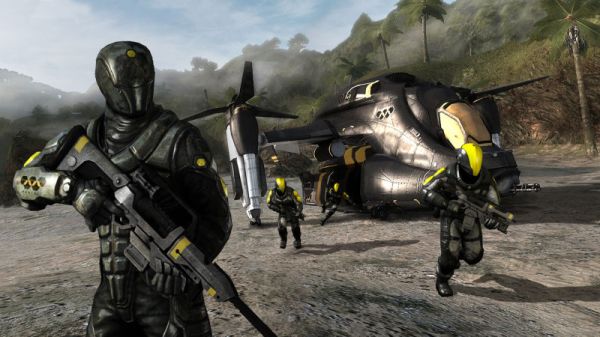 To borrow from Oscar Wilde, it would take a heart of stone not to laugh at the “I’ve done something bad” scene near the end. The game is more effective when it soft pedals its points, as when you realise that the approach of one side is not so different from the other’s, but compare Haze to the way Bioshock handles its narrative themes, and it’s like putting the product of a sixth-form drama class up against the works of Arthur Miller.

What might be the game’s saving grace is the robust approach to multiplayer. For a start, the whole single-player campaign can be enjoyed (or endured) with four players; just kick off a co-op game and leave slots open and folks can drop in and drop out as they wish. If you want to join someone else’s campaign midway, then you can do that too – remember that you’re sparing them the horrors of the squad AI at least. With friends, this could just about make the experience enjoyable.


I’m not sure the competitive online modes are such a hit, though. Despite the Nectar powers of the Mantel side and the various skills of the rebels, it doesn’t often feel anything more than another deathmatch/team deathmatch game. Even on the PS3, where it doesn’t have Halo 3 or Gears of War to contend with, I think Haze will have a tough time keeping players away from Resistance, GRAW 2 or Call of Duty 4. 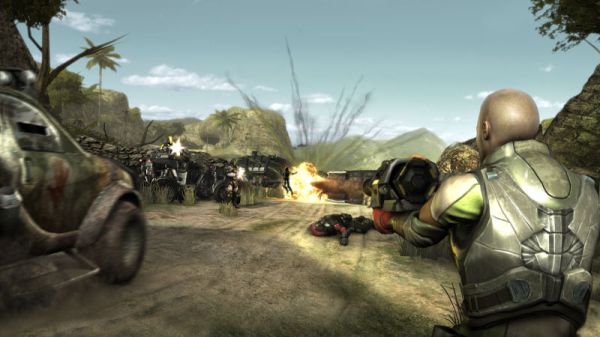 Overall, I don’t feel much glee picking over Haze’s bones. Free Radical has produced better games than this, and I hope the team will do again (though it might be an idea to license a decent engine next time around). I feel sad for everyone involved, knowing that having swapped the cheap laughs, knowing winks and simple thrills of TimeSplitters for something more earnest and ambitious, the result is so underwhelming. 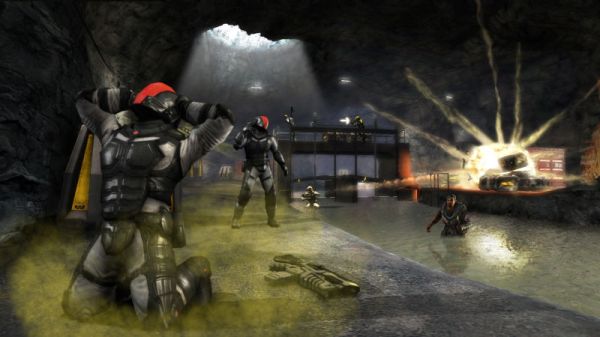 Underneath all the over-zealous preaching and the stodgy gameplay, there are some fine ideas just waiting to get out. All the same, I feel sadder still for anyone who blows £40 on the thing. Perhaps the real irony is that an action game designed to make you think about what you’re doing playing action games has exactly that effect, but in the wrong way. While you’re playing Haze, you’ll ponder “why did I ever pick this up at all?”


It should have been the PS3’s premier exclusive FPS. Instead, Haze is one of the most disappointing action games of recent years.