Schedules? Who needs them? What with Sky+, Freeview PVRs, Freesat PVRs, BT Vision and the multitude of online services, such as the BBC’s iPlayer, long gone are the days when we were slaves to the TV schedule. Going by the name alone one would assume that the Hauppauge HD PVR is just another entrant into this crowded space, but it’s not a personal video recorder in the traditional sense. In fact, you could go so far as to say it isn’t a PVR at all, though it could be used as one. Confused?


Let us clarify matters. Unlike a typical PVR the Hauppauge doesn’t have a TV Tuner, a hard disk or an optical drive. It is just a conduit – a middleman if you will. On the one side you have the source device, which can be plugged into the HD PVR via component, composite or S-Video, while on the other you have a PC connected via USB. Video and audio is then captured at up to 1080i resolutions in H.264 AVCHD and Dolby Digital, with 5.1 channel audio support added by the included optical audio input.

In all honesty it’s a convoluted system for a PVR given the Hauppauge does with three devices (a set-top box, the HD PVR itself and a PC) what can be done with just one, but this ignores the fact that the HD PVR has a far more useful and poorly advertised use as a video capture device. This makes it an ideal device for anyone who wants to archive recordings from a PVR, make digital copies of VHS cassettes or even make high-definition recordings of their gaming sessions. These may be niche uses, but if you’re in need of any of these functions the HD PVR could be a godsend.


Though the £170 or so asking price is clearly no small matter, Hauppauge bundles a fair amount of valuable items into package. This includes an impressive set of component cables. These are bonded, keeping cable mess down to acceptable minimum, while the cable sleeves are pleasingly thick, providing decent insulation. Connections are also well labelled, so you won’t confuse an audio connection to a video one or vice-versa. 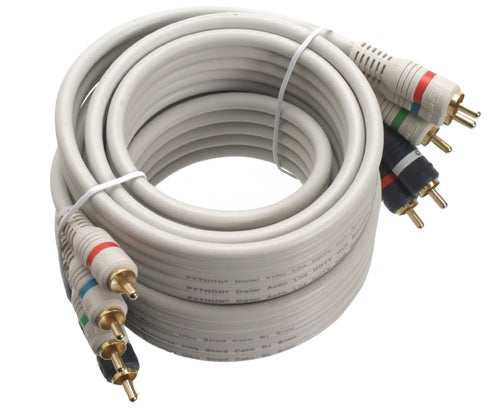 Also included in the box is a remote and IR extender cable, though there is an infrared receiver on the front of the unit should it be sitting in plain sight. This provided remote is a pretty decent effort, but it’s not used to control the HD PVR’s functions but rather those of your set-top box. It’s a neat addition if you plan to use the HD PVR as its name suggests, as a PVR, but given the scheduling system is pretty rudimentary and the needless complexity of setting all this up, it’s only really useful in the unlikely event that the set-top box or source device is a long away from the HD PVR. Ultimately, were the IR extender not in the box you probably wouldn’t miss it. 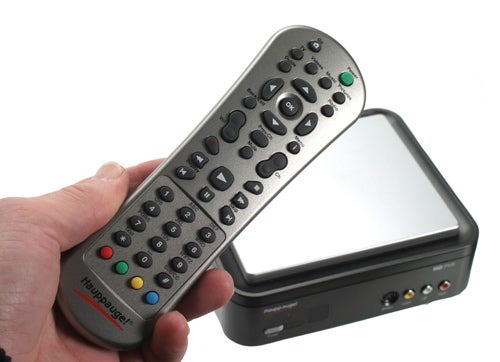 On a brighter note, however, the inclusion of Arcsoft’s TotalMediaExtreme software suite, which comprises video capture, playback and disc authoring and burning, is far more useful. Also included in this software collection is a media converter, allowing you to convert your recordings to commonly used formats for games consoles and MP3 players, as well as a tool for converting the transport stream files output by the HD PVR into MP4. It’s a comprehensive collection of tools that should help you get what you want from your recordings.

Looking at the HD PVR itself, it’s a fairly basic but fundamentally unobtrusive piece of design. It must be said, though, that the plastic casing feels pretty cheap and flimsy. This shouldn’t pose a problem provided you’re not planning an impromptu game of Frisbee in your living room, but nonetheless it needs to be handled with some care.


Though most of connectivity is on the back, the composite and S-Video connections can be found on the front – joined by the power button and a trio of status lights on the far left. On the back, meanwhile, you’ll find a full set of component inputs and outputs, allowing you to output your source device to your TV or monitor when recording. These are matched by both an optical input and an output, while a USB port is on-hand for connecting to your PC. Things are rounded-off by the power input and ‘IR Blaster’ output.

Setting up the HD PVR isn’t complicated, though is a little time consuming given all the cabling involved. Once set-up, though, installing the drivers and software from the provided disc is all you need to do to get the HD PVR talking to your PC. You’re then ready to enter Arcsoft’s capture software and get recording.


Here things continue down a pretty straightforward path. Once you’ve selected the HD PVR from the drop down box (this software can also be used with a webcam), you then have the option to tweak all sorts of settings – including brightness, contrast, gain levels and plenty else besides. Most important, however, are the codec settings. As mentioned earlier the HD PVR encodes to AVCHD H.264 and it can do this at up to 13.5Mbits/sec. One thing you can’t do, though, is change the resolution it records at, since this is always the same as the input – i.e. you can’t set a 1080i source to record at 720p or vice versa. This can only be changed once you have the completed encode. 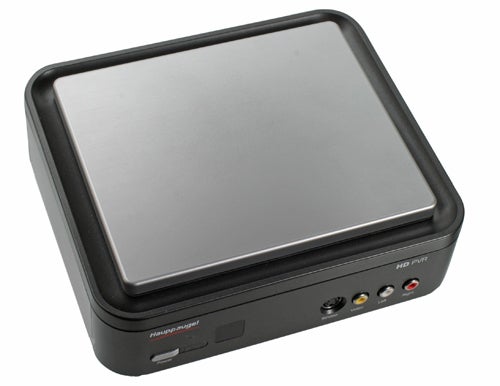 While recording you can watch the program as you would normally, though you don’t necessarily have to pass the output through the HD PVR to a display if you don’t want to since it is also displayed on the PC in the software – handy if you all want to do is setup a recording.

Once you’ve got your recording you then have several choices. You can burn them to DVD or Blu-ray, either as a raw data file or as an authored disc that can be played back on a player. You can also use Arcsoft’s software to convert into a portable media player friendly format, though a free encoder like Handbrake can arguably do the job as well and faster, too.


Finally, if you don’t need to change the resolution and just want to play the file back on an Xbox 360, PS3 or any kind of media player, you can convert the transport stream file into MP4 – retaining the same codec, bit-rate and so forth. Hauppauge provides its own tool for this, but unfortunately in our testing we found it to be next to useless. 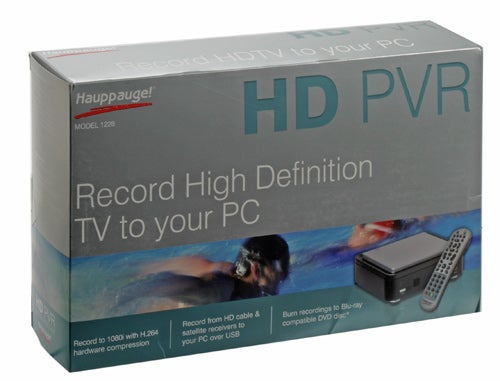 We tried several recordings yet each one invariably ended in an unplayable file, a file with video but no audio or, more often than not, the program crashing before it had finished. This wouldn’t be a big issue were it not for the fact that converting the transport stream (TS) into MP4, or any other widely used format for that matter, is nigh on essential.


As a result we found ourselves having to re-encode the entire recording to get it into MP4. Of course, there are other programs that can convert TS to MP4, but generally speaking they’ll cost you a few pennies first. Ultimately, though not an insurmountable problem for a knowledgeable enthusiast, any regular consumer will find themselves entirely lost if they encounter the same problems we did – a fact that doesn’t reflect well on the HD PVR’s usability.


Happily, we can have no complaints of the HD PVR’s output. Clearly the quality of the output is dependant on the settings used, but the HD PVR doesn’t introduce any anomalies or issues. As an example we’ve uploaded an HD video from Forza Motorsport 2 onto our YouTube channel – please remember to select HD to get the full effect. Be aware that due to YouTube’s processing it isn’t fully representative of the HD PVR’s output, but it does give you an idea.


Clearly the Hauppauge HD PVR won’t be everyone’s cup of tea. Its reasonably high price, niche usage and software issues make it unsuitable for the regular consumer. However, for enthusiasts with a specific use in mind, this is still a unique and very useful piece of kit provided you know what you want and how to get it.