Has-Been Heroes has potential. A unique hybrid of 2D brawler, rogue-like and puzzle game, it comes from Frozenbyte, the folk who bought us the trilogy of mostly brilliant Trine games. Yet Has-Been Heroes ends up as a curiosity that never really makes sense. You can almost touch the tense, exciting game that’s lurking somewhere in there, but what you’re actually playing isn’t it.

It’s full of great ideas. Take the premise, for example. You take control of a trio of over-the-hill or young wannabe heroes, charged with nothing more taxing than making sure a king’s daughters reach their school; a setup with plenty of scope for character and humour.

And how about the art style? If there’s anything Has-Been Heroes reminds me of most it’s Treasure’s much-loved Sega Saturn 2D brawler, Guardian Heroes, and with its rough-edged flat sprites and semi-3D backgrounds, Has-Been Heroes sometimes looks like a crisp, HD update of that classic game.

It doesn’t play like one, however. In fact, I’m struggling to think of anything that it does play like. In between the princesses and their school lie two wilderness areas, each a series of nodes connected by paths leading to a big boss battle at the end. You use the right stick to choose your next destination and squeeze the R1 button to begin making your way there.

Sometimes the node will contain a treasure chest or a weird machine that cranks out helpful spells. At other times, it has a stamina tent where you can regain some much-needed health. Often, though, it contains a battle, which is where the real gameplay kicks in. 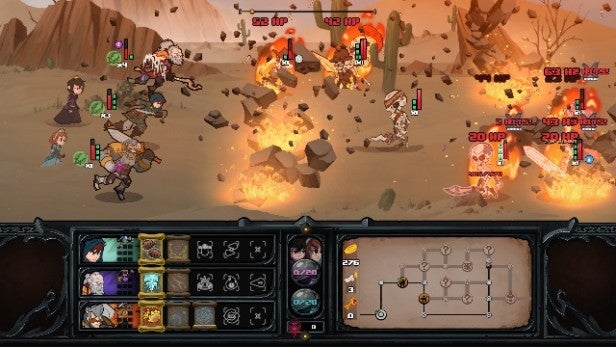 Battles work like this. Each of your heroes has his own lane, a little like the strips of lawn in Plants vs Zombies. Enemies walk towards each hero from the right, and it’s your job to either batter them back or kill them before they get a chance to land a blow. The only problem is that each hero has only one chance to attack – although this might include multiple strikes – and after that they’re subject to a cool-down timer that leaves them horribly vulnerable.

You can only control one hero at a time, and only then in the sense that you can select them by selecting their current lane, then ask them to either attack or, if there’s space, swap lanes. The trick is to use your heroes at the optimum time then switch them in and out of the lanes to make sure that no hero ever gets cornered without an attack ready.

If you’re really clever, you’ll also start to take advantage of each hero’s position within the lane itself and the fact that swapping lanes with a hero further to the right, then squeezing the ‘L’ button, will bring them back to the left side of the screen, dishing out a bonus strike to any monsters they pass.

So far, so intriguing – and it very nearly works a charm. There’s some serious butt-kicking pleasure to be had in switching and swapping heroes, rolling out combo attacks that scatter your foes across the map. There’s a real tension as your enemies near as the cool-down timer ticks away. Collecting and casting spells or using items can help you even out the odds, and I love the way that some battles end with the monsters fleeing, enabling you to rush in for some last-minute revenge attacks. 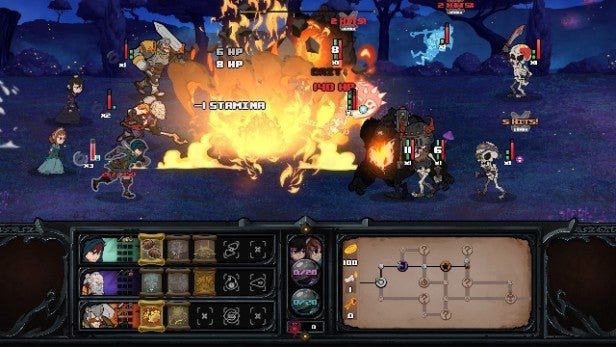 Yet there are a couple of other things you really ought to know. For one, Has-Been Heroes is deliberately structured as a rogue-like. The levels and their nodes are set out randomly and death is permanent, forcing you back to the Start menu and a new game.

This wouldn’t be so bad, but your heroes aren’t exactly what you’d call resilient; a couple of blows and they’re out for the count. Sometimes this isn’t a problem, the game sending you a gentle flow of ghouls and skeletons to slay. Often, though, you’ll get mobs building up in your lanes, and survival requires you playing pretty much flawlessly.

As with any high-difficulty game, your mileage will vary, but for my money Has-Been Heroes errs too much towards punishing and cruel. All too often a successful run ends in a sudden disaster, as the game throws more at you than you can chew. The boss battles at the end of each level are particularly nightmarish, specialising in testing your crowd-control skills. Fighting your way across both maps to get stomped at the last moment is a dispiritingly frequent occurrence.

Of course, there’s a bit of a meta-game going on behind the scenes. While you’re fighting and dying, you’re still collecting xp and gold, unlocking new spells and items – although also enemies and locations – that will be thrown into the world you’re fighting through.

As you play the game can become more challenging, with new enemies arriving to make your life more difficult, but you’ll also grow more capable of beating it. What’s more, completing stages will unlock new heroes with new powers with which to overcome the odds. 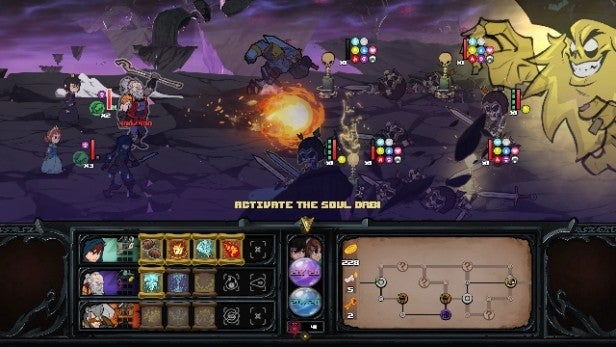 There’s nothing wrong with that in theory, but in practice the whole experience is so repetitive, frustrating and unrewarding that it’s hard to find the will to keep going.

Games such as Dark Souls 3 and Nioh can get away with this level of difficulty, because you always feel you’re improving and getting further; you’re being rewarded with meaningful gear and upgrades; and you want to see where the game might take you next. In Has-Been Heroes, I didn’t care about any of these things. Instead, I’d die and hit the next playthrough thinking “no, not this again…”.

That’s a shame, since there are some strong ideas here, including cool new heroes and spells that you can combine for interesting effects. Sometimes you’re left wondering whether the game would be better if it simply had an easier learning curve and did a better job of explaining its mechanics.

Yet at the end of the day, if a game such as this isn’t fun – if it’s just hard work – then it’s very hard to motivate yourself to play. Even when I get smacked up in Dark Souls 3 or Nioh, I still find it in me to come back for more. By contrast, Has-Been Heroes has me wondering: is it really worth the bother?

Has-Been Heroes is an interesting attempt at a new kind of puzzle/strategy/brawler hybrid, but it’s never as much fun to play as it looks like it should be. It’s a game that has good ideas and strong visual design in its favour, but it never manages to balance the high difficulty level with rewards that make the hardship worth your while.