A great way to encourage your kids to learn about programming

What is the Kano Harry Potter Coding Kit?

Kano has made a name for itself with its innovative, Raspberry Pi-based coding kits, but with its latest set they might have hit the big time. The Harry Potter Kano Coding Kit gives you a cool, wood-effect black plastic wand which works with the accompanying app to teach kids the principles of programming, only in a more accessible and exciting way. The block-based coding language and the app’s various challenges are designed to make the most of the wand’s motion controls, so that kids can build and tinker with activities where the wand becomes the main controller.

Looking for a way to draw your kids into coding? The Kano Harry Potter Coding Kit might not have the entertaining robot ball antics of the Sphero Bolt, but it’s a cool – and slightly cheaper – way to get into programming, and one that comes with an extra splash of wizardry and magic. 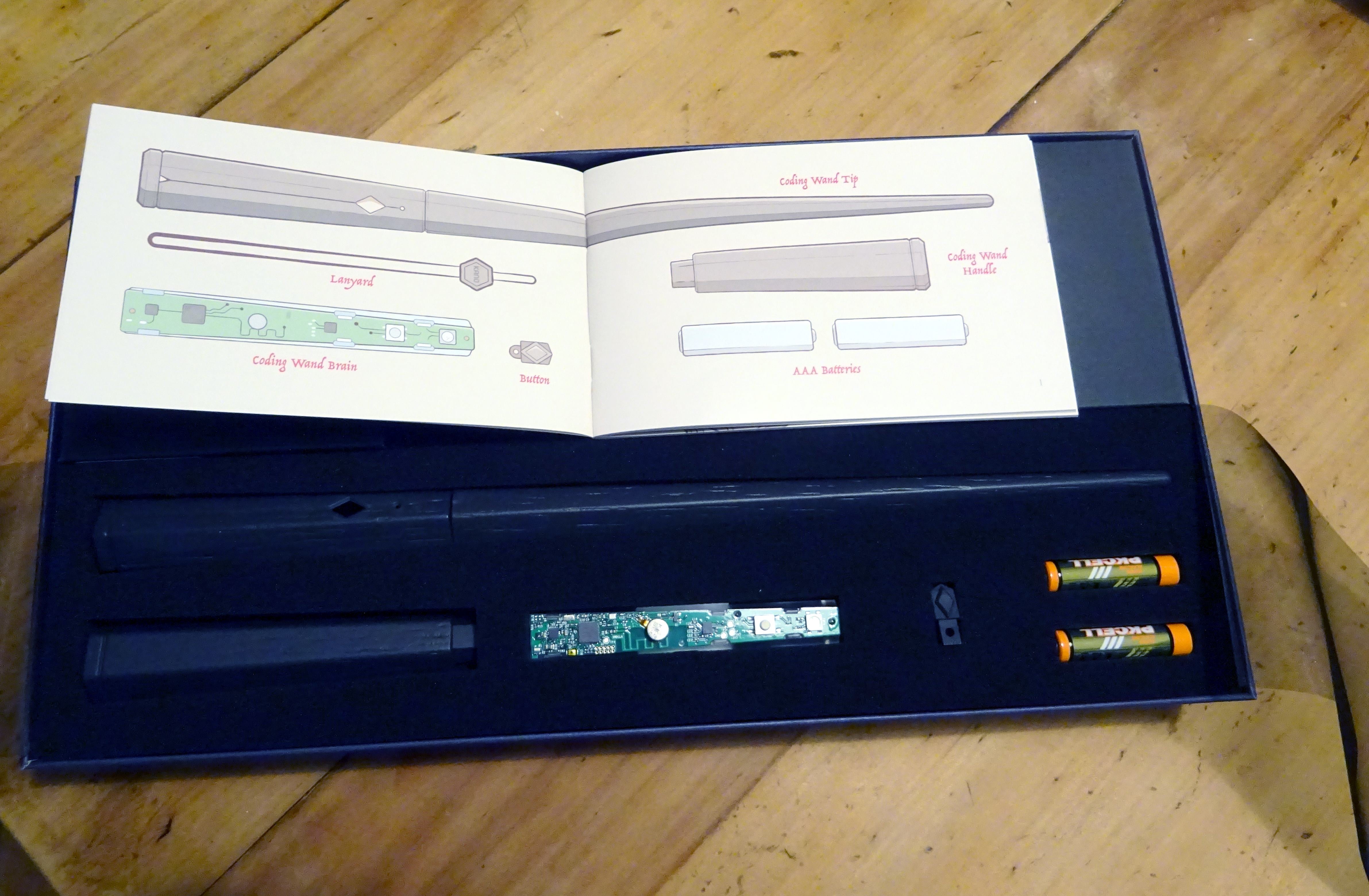 The Wand
The magic starts as soon as you open the rather beautifully presented box. Pull back the gauzy coverings and you’ll find the wand in pieces, ready to assemble by following the nicely illustrated instructions in the accompanying booklet. By the time you and your kids have put the thing together, you’ll already have the sense that you created something interesting. The app starts as it means to go on.

Once built the wand is a slender object roughly 35cm long with a single button inlaid in the handle portion, alongside a single LED. It works through Bluetooth, with the button pairing and the light flashing red and blue while you try to pair, before the connection’s made and the indicator turns a steady blue. The connection seems extremely stable and the wand will happily work a few metres from your laptop or tablet – at least to the extent where you can actually see the screen. It runs from two AAA batteries, which thanks to the use of Bluetooth LE should last six hours or so of continuous use. You might want to invest in some rechargables, as you’re likely to burn through a few packs.

Inside the wand sits a slimline module incorporating the button and the LED along with a nine-axis accelerometer and gyroscope (for motion) and a magnetometer (for direction), allowing the app to sense the wand’s position and angle relative to your tablet or PC, and register any movements you make. It’s effective too, recognising when you’re trying to aim at something specific or pull off one of the app’s Hogwarts-inspired gestures. Kano helpfully bundles in a poster to help you master these, though the in-app help is pretty good as well. 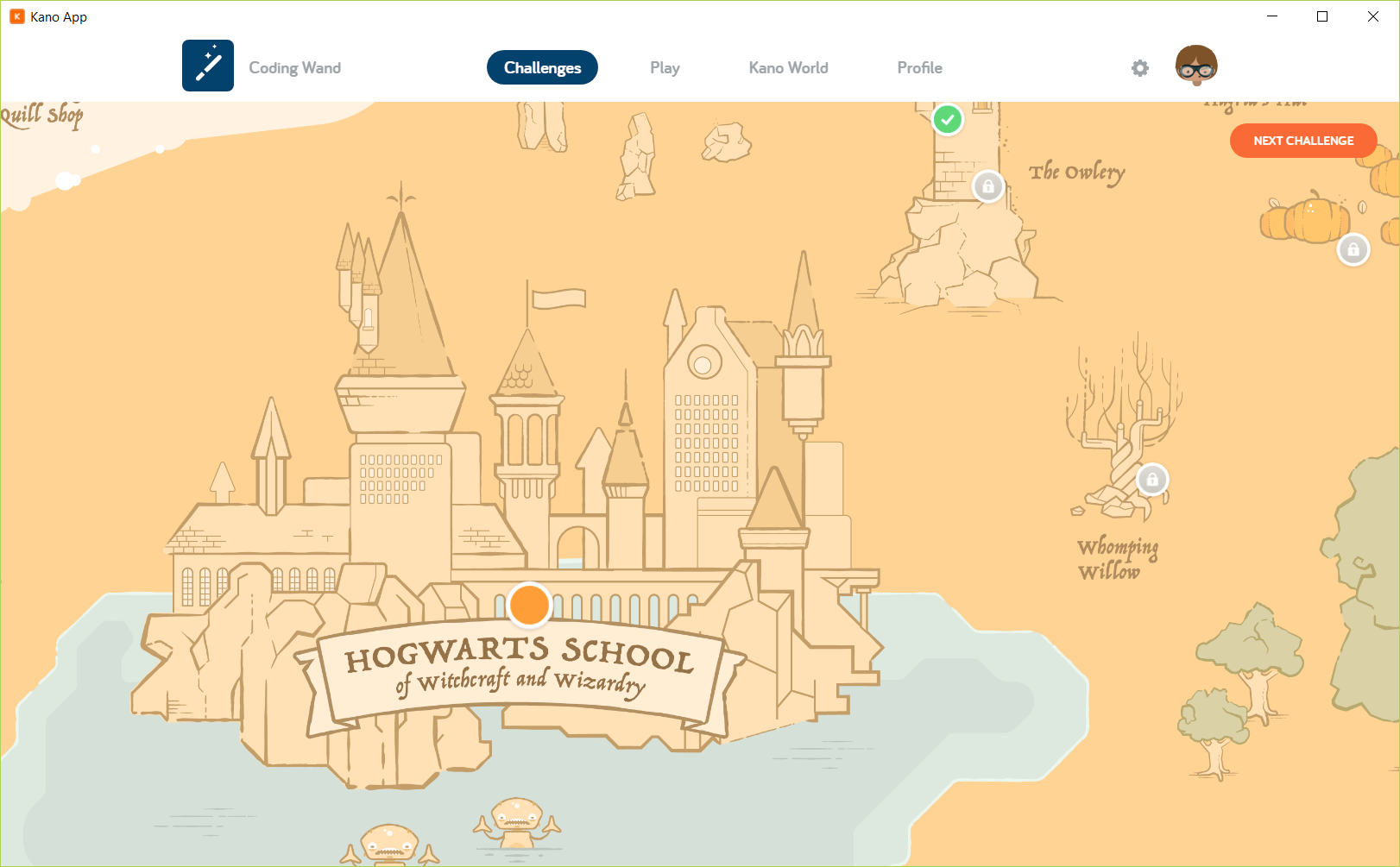 Hogwarts for Code Wizards
For the most part, the app is beautifully done, based on a map with a series of challenges set in Diagon Alley, Hogwarts, Hogsmeade and around. Each challenge is really a tutorial for Kano’s Scratch-like, block-based coding language, covering how to move blocks from the different categories on the left side of the interface, drop them into position in the workspace, change values and add variables to the mix. If you’ve used Scratch – and a lot of kids have – then it’s familiar and intuitive, even if there are some variations in the structure and the terminology.

The challenges scale up nicely, throwing in new blocks and concepts, then using repetition to get you used to working with them and some nice tweaks here and there to demonstrate how changing a value, switching objects or adding variables will have an impact on what happens on the screen. What’s more, at regular intervals the app throws in a puzzle, where the young coding wizards can prove their growing knowledge by putting together the next program on their own.

And as your kids complete each challenge, they level up and are rewarded with gear – cosmetic items they can use to customise their avatar, including clothes, accessories, creatures and props. It’s all done in Kano’s usual cheerful cartoon style, and it’s a neat way of personalising the whole experience. 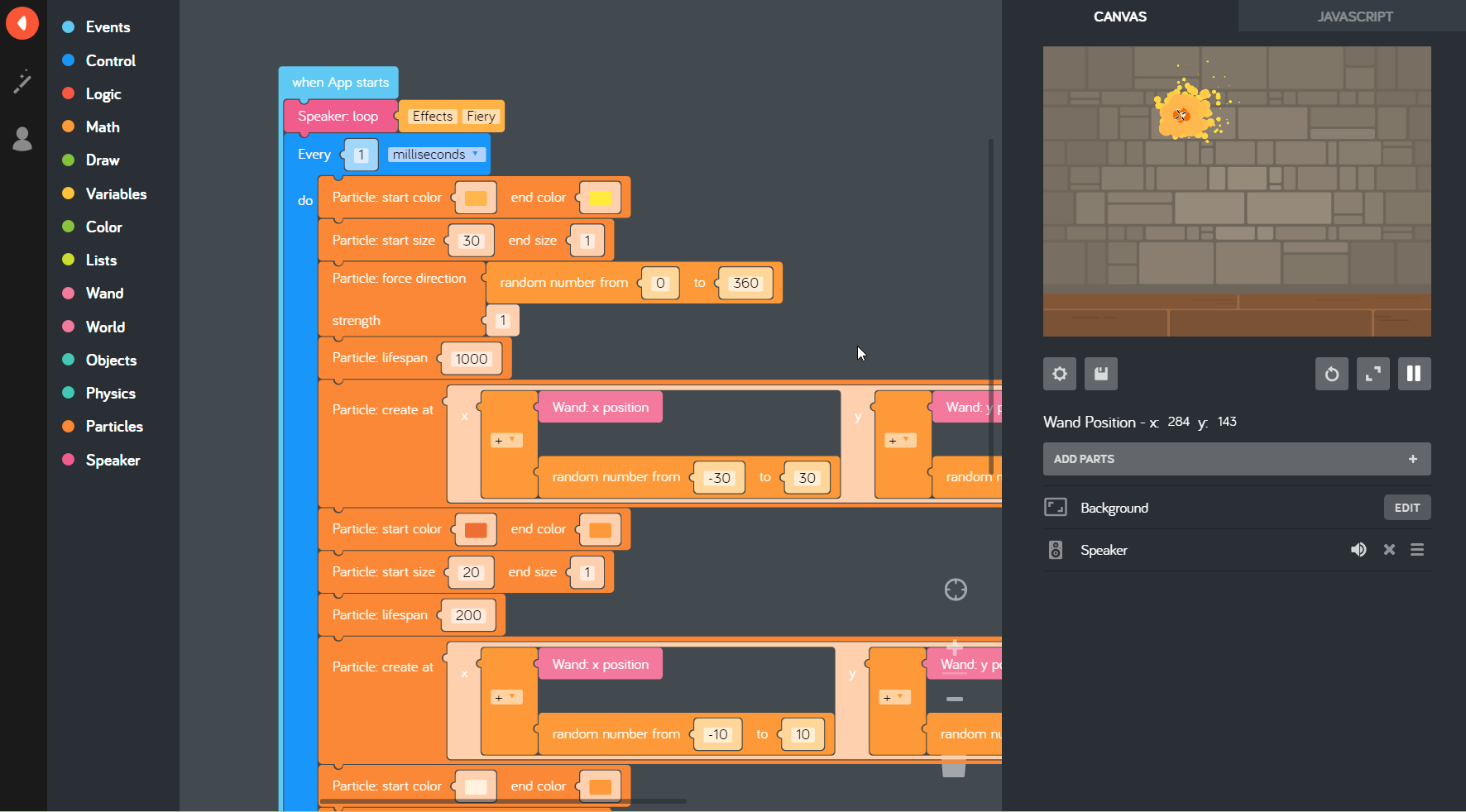 While the block-based language doesn’t differ much from Scratch, Kano has created custom blocks to handle the wand. One covers the different gestures, each one matching the spells they’ll have read about in the books and seen in the movies. Of course, the incantations don’t do anything, but who can resist?

Others can be used to trigger instructions if the wand is flicked up, left, right or down – or just moved slowly in any of those directions. You can also adjust the colour of the LED for different events, though it’s a slight shame that a) the LED isn’t on the tip and b) there’s no built-in rumble motor. Both would have complicated the design and added to the cost, but made the wand even more convincing.

If I have one minor niggle, it’s the graphics. While the backgrounds and sprites are a cut above what you’d get in Scratch, they’re still a bit old-school and basic. Where Scratch runs on just about anything through the Web, Kano’s apps have some more rigorous system requirements. Surely some more modern-looking sprites and backgrounds wouldn’t be out of the question? 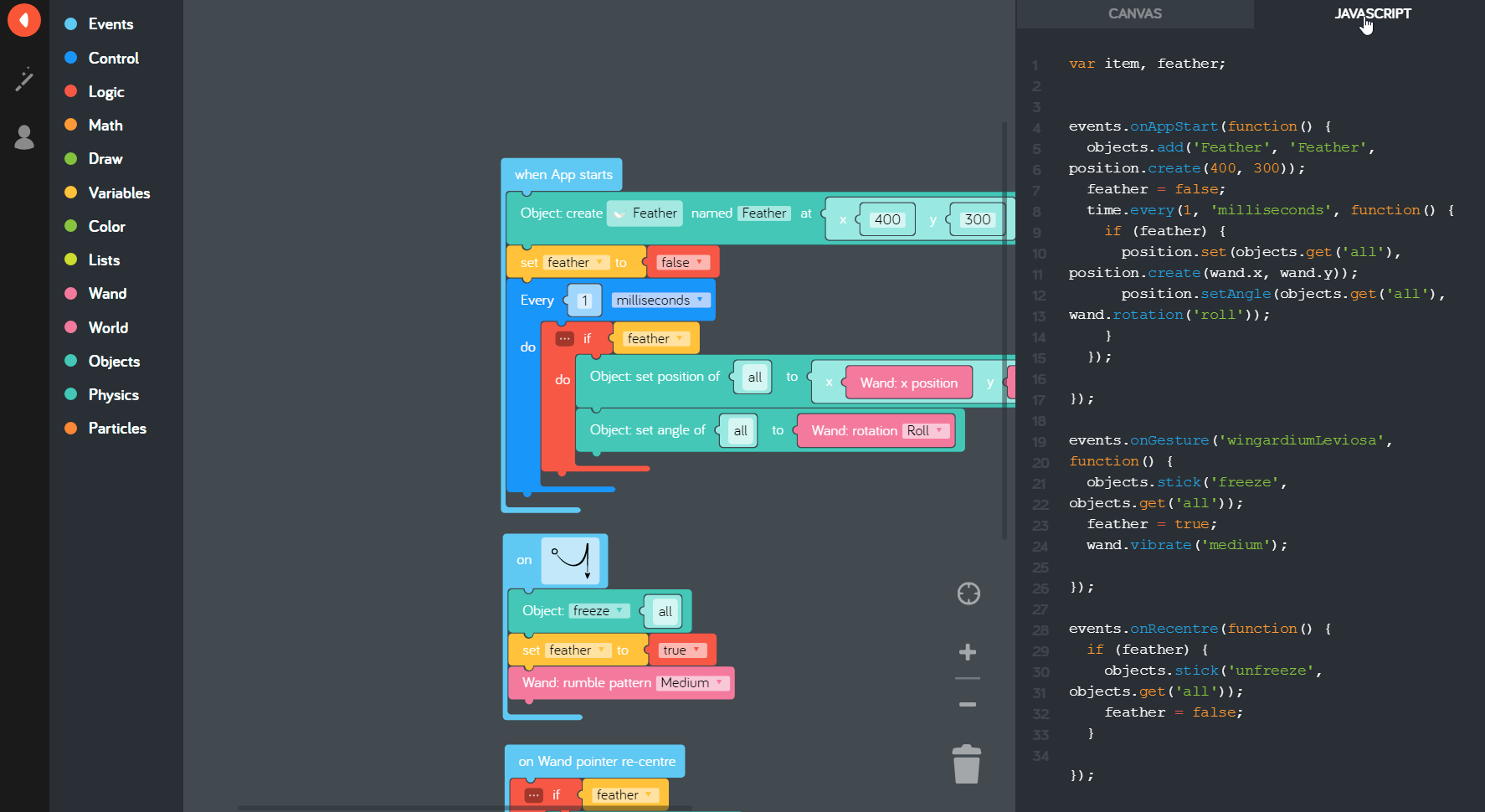 Master the Dark Arts
There are 99 challenges to complete, and by the time they reach the end kids will have learnt some pretty advanced coding concepts; fundamentals that can then be applied to other programming languages as they move on through school. Importantly, they can also, at any time, start creating their own projects, using the different sprite objects and backgrounds to build their own.

Dig into the blocks and you’ll find everything there to create some clever Harry Potter games and programs, complete with loops, conditionals, lists (which work as strings, as they do in Scratch) and some very useful Physics and Particle functions. At times you have to get used to Kano’s idiosyncrasies – collision detection, for example, isn’t handled by a logic instruction but by an event – but there’s nothing major and nothing kids won’t quickly get used, and you can do some really cool and interesting stuff.

If parents wanted a fun way to get their kids coding, Sphero’s robots and apps were easily the best way to go. Now, however, there’s a new option in the mix – and one that the Harry Potter tie-in is going to make irresistible. I’ve been working through it with my daughter, and while she has a bit of experience with Scratch and Sphero’s stuff behind her, she’s really taken to this, the Hogwarts theme and the challenge structure pulling her from one task to the next – and she’s actually taking things in and learning. The price is reasonable, and who doesn’t want to build their own Harry Potter wand?

If you’re looking to encourage your kids to learn about programming, the Harry Potter Kano Coding Kit comes highly recommended. It might sound like a cliché, but the challenges actually do make learning fun, and your would-be code wizards should come away with a decent grasp of the principles of computing.

Throw in a growing community creating and sharing programs – plus the chance to build and share their own – and this kit works like magic.