The idea of free-to-play was exciting when first revealed as a concept. It was a way to trial a new experience to see if it was for you, without putting any money down. Things lost their way a little when microtransactions and in-app purchases blurred the lines, but mostly, it was a very smart idea that had potential. And then Harry Potter: Hogwarts Mystery arrived.

Genuinely one of the most exploitative titles you could imagine, nearly everything you do here requires some sort of financial injection. It takes the idea of ‘free-to-play’ and sets it on fire. Calling this ‘free-to-download’ would have been far better, because it’s designed for one reason alone: to get people’s money.

As you can imagine, the sell here is to take a license such as Harry Potter – which is still incredibly successful – and use all the bells and whistles to try to tempt you in. As soon as you’ve loaded it up, you’ll hear familiar music and be presented with an aesthetic that takes you back to reading the books all those years ago. A wry smile may even appear upon your face as you learn that Hogwarts Mystery is going to let you step into the shoes of a wizard, choose a house and, essentially, attend Hogwarts. You even get your own wand. 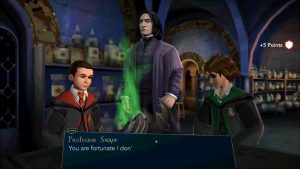 The game itself plays up to all of this, too, as you attend class, solve relatively easy puzzles and learn magic spells. There’s even ways to develop your own personality – depending on what type of wizard you want to be – and you’ll continually run into faces you recognise. Even the narrative is intriguing enough to invest in, meaning that – on the surface, at least – there’s potential here. Then you hit the brick wall.

After the initial setup, where Hogwarts Mystery lays out its foundations, you’re all of sudden presented with tasks that can only be solved using in-game currency. That would be fine if there was a quick way to earn this, but there isn’t. Instead, you have to wait for your energy and crystals to replenish in real-time and that takes an eternity. The solution? Use your actual cash to purchase more from the store.

This is shameless to begin with because the recharge time if you go the ‘free’ route can take hours, but some of the situations you’re presented with when you become trapped in this nightmare are ridiculous. For example, your character can be in the middle of trying to escape an attempted murder, and you can’t do anything because you don’t have enough currency. You don’t die, however. You either part with your money – no matter how stupid what you’re seeing unfold is – or continually check back in to see if you’re ready to get going again. Miss that window, however, and guess what? That’s right. You’ve got to re-start the task. 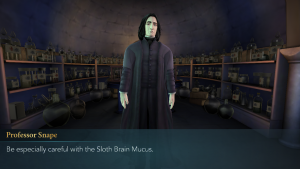 If you need a more direct explanation, you either pay – or you can’t do anything. So it’s a case of surrendering your wallet or doing something else. There is, of course, an argument that the developer and publisher have to make a return on their investment, but I can say with a lot of confidence this isn’t the way to present it.

The number of times I had to force myself back in quickly zoomed into double figures and, to be honest, I was done with it within an hour. It’s just too frustrating.

It isn’t cheap to do this, either. While buying gems can be less than £1, you need so many that this soon adds up to the point it would have been better for Warner Bros to have just asked for an upfront fee. To try to pretend this is anything other than a cash grab would be ridiculous. That’s the main event – whatever the game beneath the hood is secondary.

In short, Harry Potter: Hogwarts Mystery isn’t worth anyone’s time, unless you have absolutely nothing else to do and are drowning in cash. It’s too disruptive to enjoy as a game – even if you are loaded – and hardened fans around the world will become annoyed before all is said and done.

This is a horrible example of how bad in-app purchases can be. Do yourself a favour and stay away. Even Daniel Radcliffe would snub this rubbish.

Harry Potter: Hogwarts Mystery is more slot machine than it is video game. If you have oodles of cash you want to throw away then give it a look; otherwise, steer well clear.