When looking for a quality monitor, Hannspree is probably not a name that would immediately spring to mind, especially if you live in the UK. Like Iiyama these days – how far the mighty have fallen – it’s a company whose products seem to be often relegated to the more budget-oriented end of the market. If you want a monitor shaped like a basketball or football, then Hannspree is pretty much the only choice (I hope), but what about a more generic display suitable for work and play aimed at those over 12?


Part of the company’s new XM Style series, the Verona pretty much fits that bill. Unlike the 19in models in the same range, the Verona doesn’t feature fake wood (Boston), fake metal (New York), or hideous fake… goo (Glaze) finishes. As the only model above that size at 22in, the Verona is thankfully executed in the always-attractive piano black – which is a good thing considering its apparent lack of stand-out features. 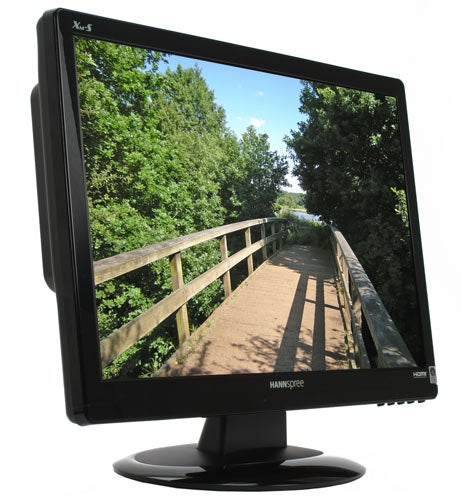 Though I can’t quite see the reference to the Italian city, overall the XM-S Verona W22 is not a bad-looking monitor. The oval base, which is of the click-in variety like most budget screens that have passed through TR recently, consists of two tones; the outer ring is shiny like the bezel, while the inner bit around the stand is matte to match the screen’s back. This is probably the W22’s only unique design feature, and does work quite well. The bezel, meanwhile, is remarkably similar to the 22in Asus VW223B or even Samsung’s SyncMaster 226cw, except it lacks the silver offset that those two use to make the lower parts of their bezels look thinner. Instead, Hannspree tries to suggest this by having a thin indent line “separating” the two sections. Obviously, this cheaper solution doesn’t work quite as well, but it does mean that if you hate those silver embellishments, this is the monitor for you.

It’s good that the small green LED is quite unobtrusive, since it’s not exactly a design masterstroke – being square where the monitor’s corners are rounded, too far towards the bezel’s outer edge to seem part of the whole, and green. Things aren’t helped by the visible buttons, which have their functions labelled on the display’s front, though to be fair the icons are small and inconspicuous while remaining legible. Oddly enough, the monitor’s name or model number aren’t present to spoil the bezel or any other part of it, though the brand, Xm-S tag and inevitable HDMI logo are all accounted for. Refreshingly, there is only one sticker to peel off, the one claiming that the monitor has been certified for Vista (as if non-‘certified’ monitors aren’t just as suitable).

Though our sample didn’t come with one, we are assured the W22 will ship with an HDMI cable. Together with the VGA cable provided, that means you get cables to cover both of the display’s connectivity options. We’re seeing an increasing move from DVI to HDMI, which is a double edged sword. On the one hand, since this move is reflected not only in monitors but also in laptops and video cards, HDMI is the future. It’s less bulky, is more easily available in longer cable lengths and can transfer an audio signal; but it is also less secure in its physical connection, lacking DVI’s screw retention mechanism. Still, there’s no halting progress, even if in some areas it does take a few steps back. 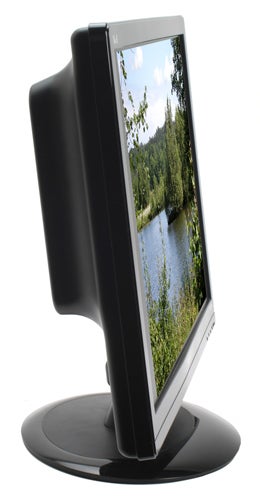 Furthermore there is a 3.5mm audio-in jack for use with VGA or those whose computers don’t carry audio over HDMI. This leads to the speakers hiding behind the bezel at the monitor’s top. They’re actually visible through the ventilation grille, but don’t sound as pathetic as they look. Though music is tinny and bass is strained, their inclusion is a bonus for general Windows sounds and the occasional YouTube video. Unfortunately there’s no headphone socket, which could have made the integrated audio useful.

In terms of adjustability, Hannspree doesn’t make any effort to distinguish itself from just about every budget monitor that passes through our office these days. This means you get basic tilt and nothing more. I’ve said it before and I’ll say it again: height adjustment at the very least is an ergonomic essential, and I’ve nothing but praise for the few manufacturers who manage to include it without adding significant price premiums. At least the display’s build quality is pretty decent, with no flex or creaking anywhere, and thick plastics used throughout.


Not just due to a lack of certain specialist adjustments, but also thanks to a logical and uncluttered layout, the OSD’s menus are some of the easiest I’ve ever used (despite the horrible and confusing colourful icons). Everything is where you expect it to be, and well-labelled. The only potential point of confusion could be DCR, which unsurprisingly stands for Dynamic Contrast Ratio, and is sensibly found under Contrast/Brightness.

Now we come to the single biggest factor of any monitor; its image quality. After some of the unrealistically inflated figures thrown around by somce manufacturers (like Samsung with its SyncMaster T200), it’s nice to find Hannspree quoting fairly modest specifications, including 300 nits of brightness and a 1000:1 contrast ratio. It also quotes the response time in both grey to grey (2ms) and typical (5ms), which again is a rare display of honesty. 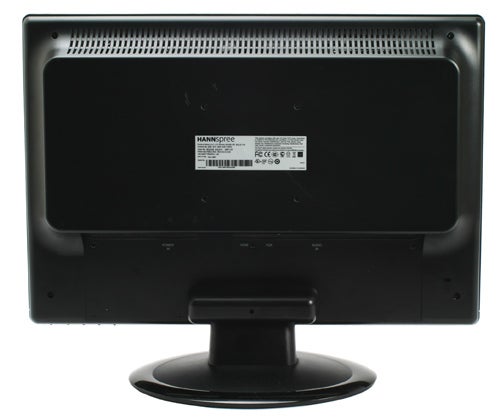 Viewing angles are not only better than expected; they’re actually quite good for a TN panel, with only some loss of contrast and hardly noticeable colour shift. Backlighting is not completely even, and there is some noticeable bleed along the right bottom corner, but again it’s no worse than on many other displays. The W22’s budget nature shines through – or rather, doesn’t – when it comes to our grey-scale tests, where it fails to distinguish between the most subtle black shades. But apart from its slightly weak dark tone performance and not quite sharp text below 12pt, the W22 still managed a very respectable performance, with no signs of banding across colour ramps and hardly a hint of visible dithering. 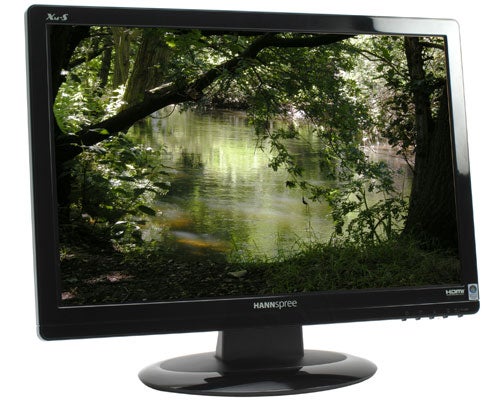 Hanspree has done a good job of calibrating the screen at the factory, which made watching movies quite pleasant without having to re-configure anything other than brightness and contrast. The best example of this is unusually natural skin-tones, and resistence to over saturate colours, as many budget monitors do. The dynamic contrast setting, meanwhile, is best left turned on for entertainment, since its effects are quite restrained but still positive. Just keep in mind that as with most TN LCDs, the Hannspree is not ideal for graphics work.


I must admit that I began this review thinking the Hannspree Verona W22 wouldn’t be anything special, but though more recognisable brands can be had for only twenty pounds or so more, it’s actually quite good for the price. It doesn’t excel in any area, yet is competent in its design and image quality, and its speakers do the job. The lack of adjustability, meanwhile, is a flaw it has in common with many pricier rivals.