If there’s one TV brand out there that might justifiably be certified insane – though in a kind of good way – it’s Hannspree. For it’s the fount of Hannspree’s creativity that we have to thank for TVs shaped like apples, footballs, bags of chips and, most recently (at this year’s Consumer Electronics Show in Las Vegas) polar bears. And that’s just the tip of Hannspree’s concept TV iceberg, we assure you.


From all this you’re probably expecting Hannspree’s ST321MBB to be yet another piece of unique madness – a TV shaped like a rugby ball to coincide with the start of the 6 Nations, perhaps. Or maybe a TV shaped like Vanessa Perroncel. Now there’s a thought.


The rather less fanciful fact of the matter, however, is that the ST321MBB looks like a black rectangle. In other words, it’s pretty much the same as every other budget 32in TV currently vying for shelf space down at your local supermarket or low-cost website… 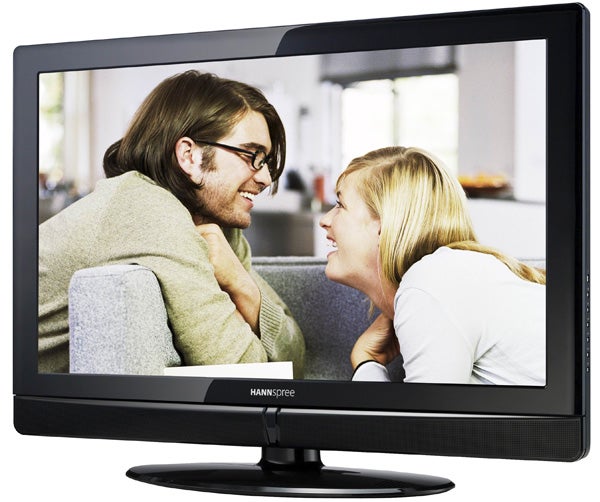 Whether this is a disappointment or a big relief depends, of course, on your aesthetic sensibilities – or your level of sanity, perhaps. For my own part, I wouldn’t particularly like to have a huge bag of chips showing TV pictures in the corner of my room, but nor am I particularly excited by the prospect of sharing my living space with something that looks as unoriginal as the ST321MBB. Especially as the finish, while glossy, looks and feels plasticky.


But heck. In all this talk of mad and bland design I’ve kind of forgotten that the ST321MBB costs less than £340. So it’s not entirely reasonable to expect the set to look like something you’d see on the pages of ”Grand Designs” magazine.


In fact, with my “it’s a budget TV” cap now firmly set in place, I’m kind of impressed to find its mostly black bezel illuminated – literally – by a backlit Hannspree logo. You can, of course, turn this off if you don’t feel particularly like boasting about your ownership of a Hannspree TV, but for some reason I actually sort of liked it.


The leaflet Hannspree gave me with the TV also states that the set won a Good Design Award – though I’m not sure what the criteria for the award was, or how much competition there was for it!


I’m also impressed to find the ST321MBB sporting a rather fine total of four HDMIs – three to the rear, and one down the set’s side. This is at least one more than I’d expect to find on such a cheap TV. Alongside these are a couple of SCARTs (one RGB), a PC port, composite and S-Video fall backs, and a component video input to satisfy the HD Ready standard. There’s no USB input for multimedia file playback, but this is fair enough for the Hannspree’s money.

I said the ST321MBB was HD Ready back there, but in fact the ST321MBB can do rather better than that. For it’s actually got a Full HD resolution – another notable achievement for such an affordable 32in TV.


There’s no denying, however, that the set’s other specifications don’t look quite so hot when laid side by side with those of our favourite LCD TVs. For instance, Hannspree only rates the ST321MBB’s contrast ratio at 10,000:1 in the set’s dynamic mode – a far cry from the hundreds of thousands, even millions to one now being regularly quoted (albeit optimistically) by most of the mainstream brands.


This relatively low contrast ratio obviously raises concerns over the likely quality of the TV’s black levels. And its quoted response time of 6ms, while not actually bad, still makes me wonder if I’m going to see quite a bit of response time-related motion blur in the ST321MBB’s pictures. Especially as the set doesn’t seem to have any significant video processing to talk of, aside from a pretty basic 3:2 pulldown system. 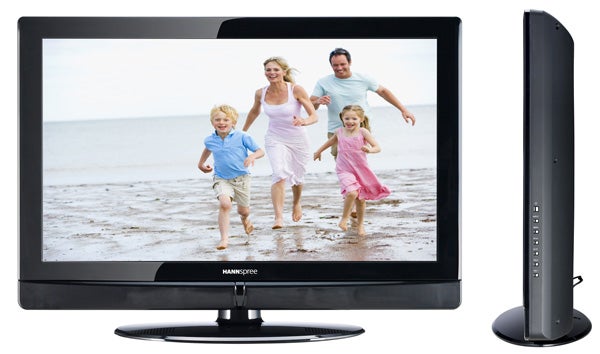 Of course, though, this is all mere supposition at the moment. So let’s switch the TV on via the flimsy remote control and see if my concerns prove well founded.


Sadly, they do. It takes all of five minutes, viewing pretty undemanding footage, to realise that the ST321MBB is a bit off today’s pace in the picture department.


Regarding motion blur, pictures pretty much continually portray that familiar lack of crispness over anything that’s moving with any speed, leaving action sequences looking soft and ‘misty’ – even if they’re coming in from an HD source. Actually, pictures even look soft if there isn’t much motion going on. This is especially true with standard definition, which some clearly uninspiring processing fails to upscale to the screen’s Full HD resolution with any real conviction.


But the ST321MBB sadly also fails to get the most from its Full HD resolution even when watching HD, as to my eyes its HD pictures lack the clarity and ‘sparkle’ that I’m increasingly expecting to see even on budget TVs. In fact, for much of the time I’d say that the ST321MBB’s HD pictures – even when pretty static – look more DVD than Blu-ray. Boo.


Dark scenes, meanwhile, look almost as greyed over and flattened as I feared they would, leaving them looking generally unconvincing and short of the sort of shadow details that help give dark scenes a believable sense of depth.


If I was being really picky, I’d say too that there’s a very slight trace of backlight inconsistency – though I only really noticed this a couple of times, and wouldn’t consider it anywhere near as much of a deal breaker as some of the other issues I’m talking about.

As is usually the case where a TV struggles to produce a really convincing black level response, the ST321MBB’s colours fail to convince either. Skin tones look patchy and over-ripe for the most part, and tones across the board look really quite muted compared with the dazzling delights often associated with quality LCD screens.


The underlying colour temperature looks a bit off too, appearing to my eyes to marginally favour a PC-flavoured temperature rather than aiming for the 6500K level reckoned to be best for video.


Is there anything good that can be said about the ST321MBB’s pictures, then? Well, although colours aren’t as dynamic as we’d like during dark scenes, the picture can look quite bright and punchy when showing predominantly light material. 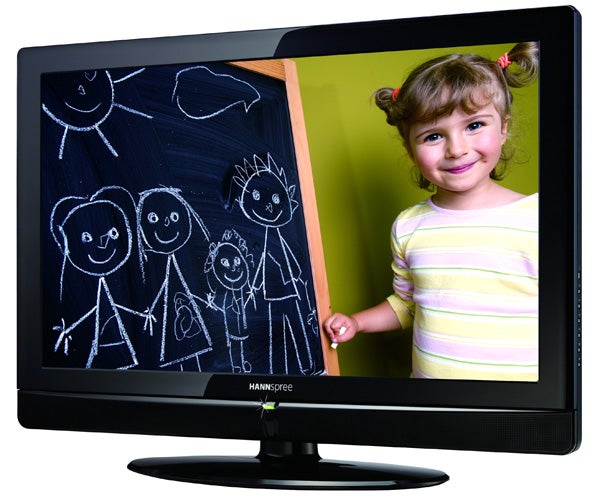 Also, while motion certainly loses resolution pretty routinely, it’s not an absolute smear-fest of the sort we sometimes see at the Hannspree’s level of the market.


Similarly, I should qualify my statement that the ST321MBB doesn’t really make HD look like HD by saying that sometimes the TV gels with a particular HD image and suddenly does look reasonably crisp – at least for a few seconds.


Aside from qualifying my earlier negatives, though, I’m really struggling to come up with any wholly positive things to say about the ST321MBB’s pictures.


The ST321MBB’s speakers give me a little more room for positivity, as they manage to present a quite clear, detailed soundstage that doesn’t distort when pushed quite hard. Before you get too carried away, though, the soundstage also lacks any significant sense of bass, which can leave action scenes sounding rather tinny and thin.


Time was when Hannspree’s ST321MBB would have impressed as a more than respectable budget option. However, with Toshiba’s superior 32AV635D now actually available for less money online, Samsung’s miles better LE32B550 only costing around £60 more and a rather ‘last year’ look to the ST321MBB’s picture quality in a number of key areas, it’s hard to think of any compelling reason why you should buy one.