Variety is the spice of life, they say. So what could be spicier than moving from the £16,000 Sim2 Nero 3D-2 high-end projector in our last video display review to the £334.98 Hannspree SE40LMNB we’re looking at today?

It’s worth reiterating that price: just £334.98, for a 40in LCD TV equipped with edge-LED lighting and multimedia playback. Hannspree has sprung some price surprises on us before, but this one takes the biscuit.

Not surprisingly such a puny outlay doesn’t exactly get you the world’s most fashionable TV. If you look closely you can see an unusual grained finish to the bezel, and the set is reasonably slim around the back. But aside from these ‘moments’, it’s more or less just another in the long line of basic grey and black rectangles. It’s actually reasonably sturdy, though – provided at least that you make sure the stand screws have all been fully tightened. 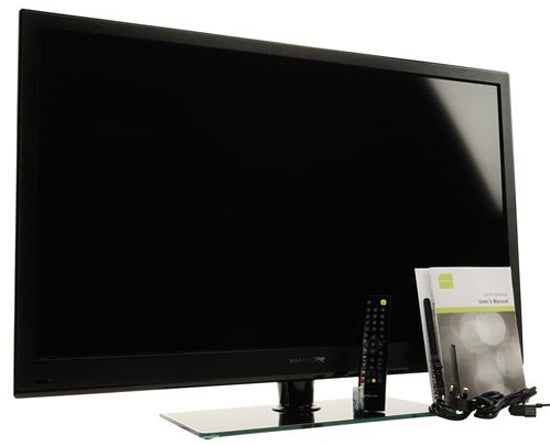 Not that you need to stand mount it. For Hannspree has thoughtfully positioned all the connections so they can be accessed from the side; none protrude directly out of the TV’s rear, making it easier to put straight onto a wall.

Connections
The connections provided include highlights of three HDMIs, a D-Sub (VGA) PC port and a single USB. The USB is particularly significant/surprising, because as well as allowing you to play back video (H.264/MPEG 4/AVC), photo (JPEG) and music (MP3) files, it also permits recording from the built in Freeview tuner. Handy stuff indeed for such a cheap TV – though obviously some will feel let down by the set’s lack of MKV and Divx support.

The eagle-eyed among you might have noticed that we didn’t add ‘HD’ after Freeview in the previous paragraph. For sadly the set only has a standard definition tuner – understandable, perhaps, at its price level, but to be honest it’s getting increasingly hard to feel good about a non-HD tuner at any price these days. Unless, perhaps, it happens with an especially large and cheap TV like the 55in Finlux 55S6040-M, which could be used as a simple monitor to go with an external HD broadcast receiver.

The more we explore the SE40LMNB’s features and specifications, the more obvious its budget intentions become. The only things of note are its full HD resolution, multi-level noise reduction system, and dynamic contrast option. Otherwise you get just the basic picture settings you’d expect to find on any TV worthy of the name.

In fact, the set doesn’t even appear to carry a native pixel for pixel aspect ratio setting for watching HD sources. This means HD pictures are shown with overscanning, whereby the image is slightly magnified to push the edges of the image off the sides of the screen on the assumption that there will be messy data ‘strips’ there that you won’t want to watch. In reality, such extraneous data is hardly ever there on modern HD sources, so we’d much, much rather be able to watch such sources without any rescaling processing.

The SE40LMNB is not a particularly friendly TV to use. The remote control is basic in the extreme, and the onscreen menus annoyingly take over the whole of the screen so you can’t keep watching TV while you use them. There are organisational issues too; for instance, the auto tuning option isn’t contained within the set up menu as you would expect, but rather in a separate TV menu. 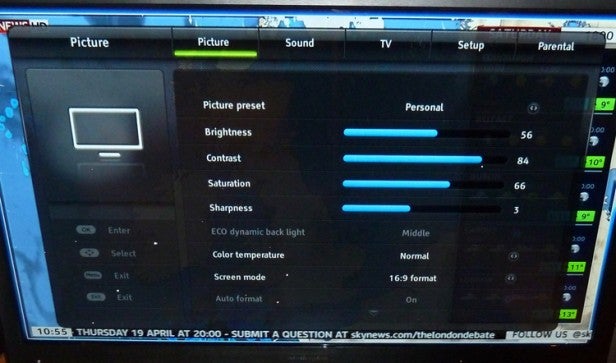 The only plus point with the menu system is the TV’s electronic programme guide. For this DOES keep a small version of the picture playing in the bottom corner, while still presenting you with plenty of information without making the screen feel cluttered.

First picture thoughts
The SE40LMNB’s picture quality initially disappoints. Why only initially? Because on later reflection, expecting anything more than average images from a 40in LED TV that costs under £350 is pretty much like expecting Christmas every weekend. But let’s go back to our first impressions for a moment, and look at the three main reasons why the SE40LMNB initially comes a cropper.

First, standard definition pictures look positively ropey. They’re extremely soft, with blurry edges, a lack of detail, and no sense at all that the TV’s upscaling engine is working even slightly hard. It doesn’t help, either, that the screen is rather susceptible to LCD’s motion blurring problem. Not surprisingly, at this point the set’s lack of an HD tuner looks all the more unfortunate. 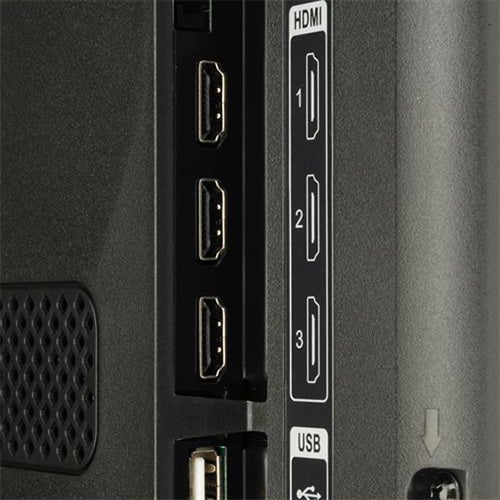 Another issue is the SE40LMNB’s colours. They look rather simplistic, for want of a better word, lacking subtlety and that sense of a wide gamut that you see with so many premium TVs these days.

Switching to HD, meanwhile, reveals our third concern: a continuing lack of sharpness. Sure, pictures do look HD – at least compared with the fuzziness of the SE40LMNB’s standard def efforts. But they certainly don’t look as forensically detailed and crisp as we’re accustomed to them looking on most other modern TVs – including a clutch of recent almost as affordable Finlux TVs.

It certainly doesn’t help here that the set doesn’t carry a pixel for pixel HD mode.

However, once we’d got past these initial woes, we did start to warm to its images a bit. For instance, with HD at least, colours look credible, if not especially subtle or dynamic.

The image’s contrast also looks surprisingly decent, with credible black levels appearing alongside reasonably punchy colours and whites even within the same frame. The washed out greyness we would usually expect to see over dark scenes with extremely cheap TVs is largely absent. The worst that can be said about the SE40LMNB’s black levels is that during dark scenes you can see four or five relatively low-level patches of extra brightness.

This backlight inconsistency is, obviously, not ideal. But it’s also found to some extent on almost all edge LED TVs – and actually, so long as you avoid the set’s Vivid preset and keep the backlight setting to a sensible level, it’s not a massive problem.

Processing-free zone
The SE40LMNB is pretty much devoid of processing, aside from a noise reduction option that you frankly shouldn’t touch with a bargepole. But far from being a bad thing, on a budget set like this one it’s actually rather refreshing to find HD images unsullied by what would almost certainly have been second-rate frame interpolation or 100Hz/200Hz processing. 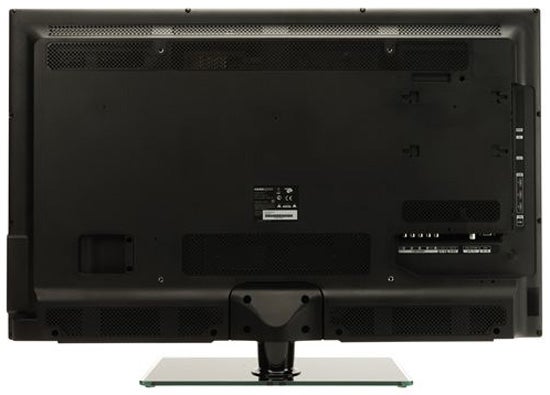 A 40in TV as cheap as the SE40LMNB clearly has potential as a dedicated gaming monitor in a bedroom or study. But this appeal is marginally tempered by its average input lag figure of around 48ms, arrived at from measurements ranging from a good 33ms to a potentially performance-reducing 65ms. This isn’t a massive problem given that we usually consider an average input lag score of under 40ms to be fine, but if you’re a really serious gamer, it’s still something you probably need to know about.

Wrapping things up with the SE40LMNB’s sound, we’re again in average territory. Only this time it’s average with a capital A, as the downfiring speakers start to sound thin and muddy under even the slightest duress. It does at least, though, work acceptably well with undemanding soundtrack fare like daytime TV and, um, Woody Allen films.

Verdict
The timing of the Hannspree SE40LMNB isn’t great, coming as it does on the back of a series of TV crackers from Samsung, LG and Panasonic. But once you get past the initial shock of the SE40LMNB’s flaws and remember that this is, after all, a 40in TV that costs under £350, there are positives here – especially if you can feed it as much HD as possible. As such it’s not an out and out bad purchase, just not a particularly outstanding one.