Ah, Full HD. Those two magical little words have come to mean so much in digital entertainment. What it refers to is a device that can handle a resolution of at least 1,920 x 1,080 (1080p). Until now in the TV world, if you wanted this in anything smaller than 32 inches, your only option was an LCD TV/Monitor hybrid, but Hannspree appears to have changed this with its 28in HT09 Full HD television.


However, appearances can be deceiving, and upon noting the size of this TV, I became immediately suspicious. Some of you might remember the £260 Hanns.G HG281DJ 28in Monitor we reviewed a while back and given Hanns.G and Hannspree are basically one of the same and this TV shares the same dimensions, it’s reasonable to surmise they both use the same LCD panel. My suspicions seemed to be confirmed by both panels sharing characteristics like a 1,920 x 1,200 (16:10) resolution, 3ms response and low 800:1 native contrast ratio. However, with the Hannspree HT09 available for only a tenner more than its monitor incarnation and sporting a whole host of connections in addition to a remote, could we be looking at one of the bargains of the New Year? 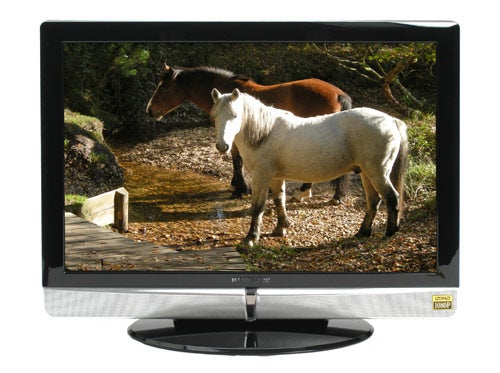 Taking the television out of its box, one obvious corner that’s been cut is the cables, in that aside from power there aren’t any. That’s not too great a gripe though, as most AV devices will come with their own and an HDMI cable can be found for under ten pounds these days. Aside from this there is an incredibly thick manual, detailed multilingual quick-start guide, a remote and a cleaning cloth — a nice and unexpected inclusion at this price point.


And you’re going to need that cleaning cloth, as most of the display and part of the remote are finished in shiny, glossy black. On this note, it must be said that the HT09 is a million miles away from the HG281DJ in terms of appearance. A piano-black bezel around the screen gives it a more premium feel and is broken only by the relatively subtle Hannspree logo in silver lettering. 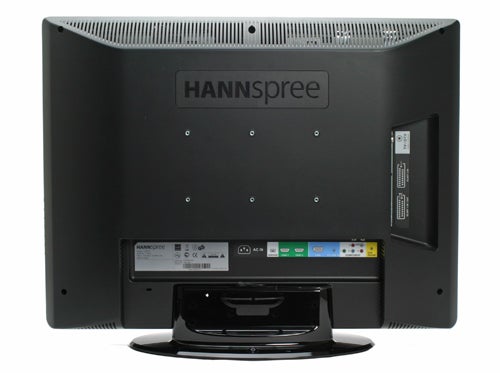 Beneath this is a silver speaker section with angled contours that do a reasonable job of keeping things respectable, as opposed to cheap and nasty. This is divided in the middle by a chrome inset, which contains an unobtrusive blue power LED that turns orange in standby. This all rests on an oval glossy black stand, but this is the only part of the well-built display that feels like it might not survive a bump or two, so using the VESA mounting holes to wall mount the HT09 might prove desirable.


Overall, while its slightly plasticky look isn’t going to quite match the styling of many big-brand televisions costing £500 or more, this is certainly nothing you’d be ashamed to put next to your PS3.

As far as the Hannspree’s controls are concerned, there is a full set of chromed buttons along the display’s right edge, invisible from the front and quite attractive regardless. These allow for volume, channel and input adjustments, and obviously call up and navigate the menu. However, though they look pretty, they’re not easy to operate, since being all the same shape doesn’t let you easily know which button you’re pressing and the finish makes them slippery.


Fortunately, you won’t need to bother with them as long as you have the rather nice remote to hand. It uses two AA batteries, has a consistent and logical layout and the rubber keys are large, well-shaped and comfortable — something that can be said for the remote as a whole. Again, it’s far better than you have any right to expect for the money, with the only real niggle being that there is only a single input-selection button, meaning you have to cycle through the whole lot every time. 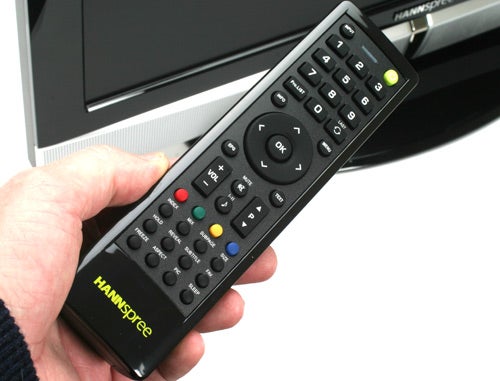 Getting onto connectivity, however, we have our first sign of the Hannspree’s budget nature. Hidden around to the left of the television’s rear are some easily accessible connections consisting of dual SCARTS and an RF jack. On a Full HD TV, one would hope for at least one easily accessible high definition port, preferably HDMI, and it’s a pity Hannspree has decided to locate both HDMI ports at the back. Two HDMIs is also less than we’re used to seeing on a TV these days, but keep in mind that the same can be said of the HT09’s price tag.

Joining the HDMIs is a D-SUB PC connector and separate component input. There’s no sign of composite, but this is a blessing since it’s the lowest-quality connection out there, and if you really do need it, a simple and dirt-cheap SCART adapter will give you either this or the higher-quality S-Video.


Audio connectivity is another disappointment, with just twin phono inputs for the component source and a 3.5mm jack for PC audio. Moreover, the “ear phone” (sic) socket is located at the back with all the other ports, making it almost impossible to reach, while there are no digital audio outputs (or inputs) at all. 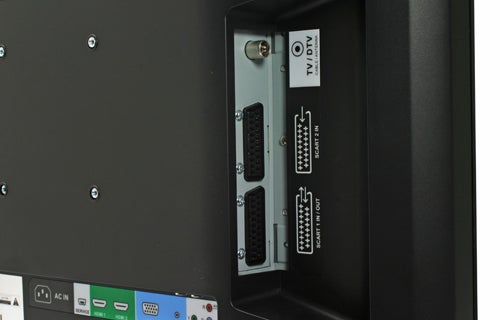 Fortunately, the speakers aren’t completely useless for a cheap TV such as this. As long as you’re listening to treble-focused music such as light classical tracks or even films not too heavy on explosions, they do a commendable job, creating sound that has some depth and detail. Importantly, they also do so at a volume that is adequate for a smaller room. But it’s not all a walk in the park. Sitting close to them, you can clearly hear pronounced rustling and background noise, and they distort quite badly at their highest volume. Worse still, when it comes to any intensive bass, the HT09 simply sounds like its audio is coming out of a tin can.

When tuning the set, you’ll be glad of the full colour menus, which are large, logically arranged and easy to navigate. There is a range of both audio and display presets available, though you’ll want to ignore these in favour of the custom User settings — the ‘Movie’ mode is particularly over zealous in boosting blacks.


Unfortunately, there is no 1:1 pixel mapping mode, either — something one needs when you’re dealing with a 16:10 screen. Aspect ratio options were initially limited to Auto, Full or Normal, with the latter just making any input 4:3. Setting a PC to 1,920 x 1,080, the desktop actually went beyond the physical borders of the display and though Zoom and Subtitle aspect modes had now become available, neither rectified this situation. Even setting HDMI to Underscan still left a large part of the desktop off the screen.


This situation improves when connecting a dedicated AV device over HDMI, but even here leaving the HDMI aspect setting to ‘Auto’ means part of the image gets cut off, so it’s ‘Underscan’ again. Having a purported Full HD television cut off part of a Full HD film by default is a major oversight and matters get even worse when running video over component, where there is no way to fix the noticeable overscan. 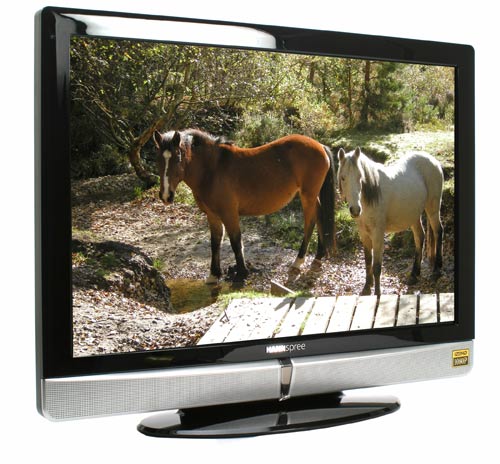 So far, so bad, but can the HT09 redeem itself somewhat by offering decent image quality? Unfortunately, this is the other area where this Full HD TV really shows its budget colours. Horizontal viewing angles are reasonable for a budget TN based panel, so though you’ll usually want to be sitting centrally, for most films and games the horizontal viewing angles are good enough to enjoy with multiple people. Vertical ones, however, are a weakness of even the best TN panels and this is one display where you don’t want to be viewing material from anything lower than 90 degrees, as most of the picture will just get lost in black.


In grey-scale tests, the Hannspree HT09 performed slightly better than expected. Its dynamic contrast system does help create reasonably deep blacks, albeit at the cost of some detail at both ends of the spectrum. Backlight bleed is also well-contained, though overall the backlight is a tad uneven. So far, at least, it’s a decent performance for a budget TV.


Things begin to come unstuck due to the set’s poor sharpness, very bad banding and some tearing with fast moving images. Unfortunately, the sharpness issue makes this display difficult to use as a computer monitor despite featuring what is essentially a monitor panel, since even typing or reading articles on the net becomes far more tiring than it needs to be. And while tearing is infrequent, banding is noticeable in any large graded blocks of colour.


Viewing high definition video on the HT09 can be enjoyable, but only if you’re not too demanding. Dark games and films have more black detail than you would expect for this price, but colours lack the punch and verve you’d get from a dedicated HDTV and the scaling issues, poor picture processing and relative lack of size mean you won’t enjoy the full detail to be found in 1080p sources.


For TV use, setting the HT09 up is easy as pie. When on the antenna input, an extra menu appears exclusively dealing with channels. Everything you might need can be found here, including an automatic channel scan that searches for both digital and analogue signals over the TV’s tuner. Likewise, the EPG is a pleasure to use and switching between channels is also as fast as you’d hope. Actually watching digital TV, however, betrays a lack of effective picture processing and noise reduction. This results in some fairly ugly looking pixel crawl and a general lack of fidelity, making the lower quality channels (aka Dave), very difficult to watch.


Overall , the HT09’s many flaws leave it difficult to recommend despite its incredible price. As things stand, this TV will only be suitable for a small minority of users: those who primarily watch the better digital channels, aren’t too picky about image quality and want something to plug their games console into. But even here, if you can afford a little more, you’d be better off getting a ‘mere’ HD-ready television in either 26 or 32 inches that this ‘Full HD’ effort.