Until netbooks based on nVidia’s ION or AMD’s platform (like Packard Bell’s Dot m) arrive in retail, these miniature underpowered laptops are a bit like generic cookies: they might be cut into different shapes and have various toppings, but they’re all made from the same dough. Superfluous analogies aside, today we’re taking a look at Hannspree’s HANNSnote, which – like the Advent 4211 and LG X110 before it – is essentially a restyled MSI Wind, including the same old specifications. Join us as we find out if this is the best Wind rebadge yet.


Even with the netbook closed an aesthetic change is immediately obvious: the glossy black lid has a stylish chromed strip running through it with the evocative phrase ‘find yourself’ etched across it. While it might not help you to discover your inner nature, our model’s piano black lid certainly shows off fingerprints and grime to best effect, though going by past experience this will probably be less of an issue if you opt for the white model. 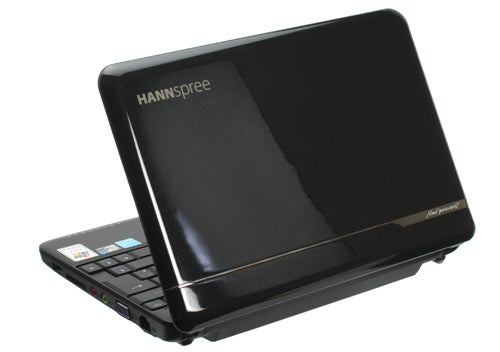 To be fair to Hannspree this kind of finish is an issue with most netbooks, and opening the HANNSnote up reveals a sensibly matte interior. Crucially this includes the screen, unlike many recent netbooks which are regrettably following the notebook trend of glossy, reflective displays.


Aside from another faux-chrome inset and chromed power button, there’s little else to distinguish this from the original Wind. The only other aesthetic change is that the status-LEDs on the palm-rest are integrated into a single translucent bar.

Unfortunately, Hannspree hasn’t followed LG’s example in modifying the keyboard, so its netbook retains all the faults that plagued MSI’s machine. Perhaps the most annoying of these is that the Fn key is found on the outside of Ctrl, but cramped keys between ‘M’ and right-shift to make room for the cursor keys doesn’t help matters either.


Thanks to a bigger battery the HANNSnote’s back is raised, but whether you like the slope this gives the keyboard is down to personal preference. Feedback is quite good, offering a decent amount of travel though no definite click. Keys are smaller than superior offerings, such as Samsung’s N110, and we’ve yet to encounter a netbook that can match the amazing keyboard on HP’s Compaq Mini 700, but with a bit of care you can get a good typing speed without too many mistakes.


The HANNSnote’s sensitive but square touchpad is also on the small side, especially when compared to the multi-touch efforts on Asus’ latest models such as the 1008HA Seashell. However, one improvement Hannspree has made is that the MSI’s rocker is now replaced with two distinct buttons, both of which offer excellent feedback no matter where you press. 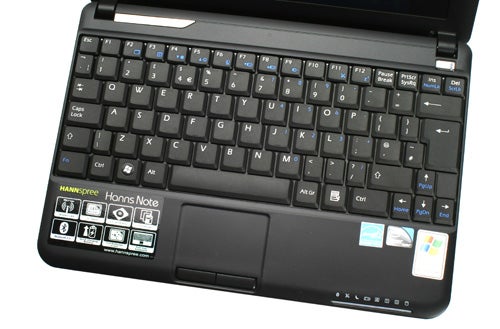 Connectivity is standard for a netbook and again identical to the Wind. Hence you get a lock slot, power jack and two USB ports on the left, while on the right we have a third USB port, card reader, headphone and microphone jacks, a VGA output and Ethernet port.


Inside it’s the same 1.6GHz Atom N270 processor, 1GB of RAM, 160GB hard drive and integrated GMA950 graphics as are found in nearly every other netbook. This should give adequate performance for everyday productivity tasks, surfing the web and playing 2D games under Windows XP, but the wonders of serious multi-tasking and HD video are mostly out of the question. One area where the Wind excelled at the time was on the wireless front, and Hannspree retains both Draft-N Wi-Fi and Bluetooth 2.0 from the later iterations.

Like the 10in 1,024 x 600 screens found on most netbooks, the LED-backlit one on the HANNSnote is fairly average. It’s essentially unchanged from the Wind’s, so we get bright colours, relatively good contrast and sharp text, with very decent viewing angles. What lifts it above the majority of current netbooks is its matte finish, which might not look quite as good in an ideal environment but makes working under everyday circumstances (you know, with external light sources) far more pleasant. 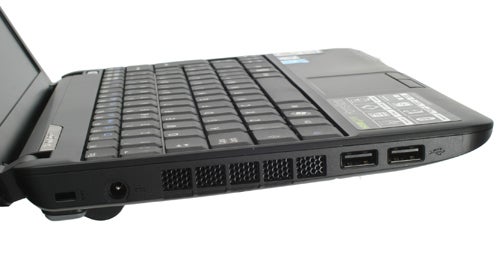 The speakers, meanwhile, are hideously underpowered, so you’ll be hard-pressed to hear the quieter moments in films or music. Nor does Hannspree’s netbook offer any form of Dolby processing like many of its rivals do, but it’s still perfectly adequate when listening through external speakers or headphones.


Getting onto that all-important battery life, this is one area where Hannspree has thankfully decided to make a major upgrade, providing a 4,400mAh, 49Wh battery as standard. Compared to the pitiful 2,200mAh efforts that come as standard on the other Wind clones, this is fairly encouraging, especially since weight has been kept down to a reasonable 1.3kg.

In practice, the results are pretty good. Though nowhere near the longevity of the better Asus or Samsung netbooks, we managed to get a respectable four hours and 20 minutes running video with the screen at 50 per cent brightness and wireless turned off. Since the screen is perfectly usable at 25 per cent or less, you should be able to get around five hours or more of light use from the HANNSnote.


Before we get onto considerations of price, it’s also worth mentioning the elastic leatherette black slipcase. It looks reasonably attractive despite the neon-green Hannspree logo, and though it’s a bit of a tight fit thanks to the netbook’s protruding battery, it’s a sight better than nothing.


Finally then it’s time to talk about price. The HANNSnote is currently available for around £260, but a £20 cashback offer that lasts until the end of next month brings that down to £240. For this kind of money Hannspree’s take on the Wind seems like a bit of a bargain. Even without the cashback it’s still good value, though then it’s seriously worth considering a bit more for something like Asus’ Eee PC 1000HE, offering a better touchpad and keyboard, and far superior battery life for around £290. 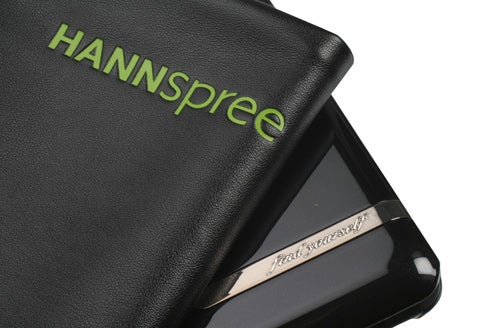 If your budget won’t stretch that far, the only serious competitor at the £260 mark is the original Eee PC 1000H XP, which offers a better touchpad, Dolby sound processing and longer battery life but worse keyboard, outdated looks and a heavier weight. While the cashback offer lasts, little can touch the HANNSnote for value


If you can get past its faults, Hannspree’s HANNSnote is excellent value for a netbook with a six-cell battery. However, depending on your needs it’s definitely worth checking out the competition before buying.