Ask just about anyone why they bought an Xbox and the answer, I am willing to bet, would almost certainly be Halo. Many would accredit Goldeneye for the N64 as the game that proved fist-person shooters could work on a console, but we all know that it was Halo that showed this to the masses.


With Halo Wars Microsoft is looking to prove that yet another genre usually not considered console fare can work – real-time strategy. That’s actually a pretty big challenge, but the way Microsoft Games Studios and Bungie have gone about creating Halo Wars goes some way to inspire confidence that it might not be truly awful. 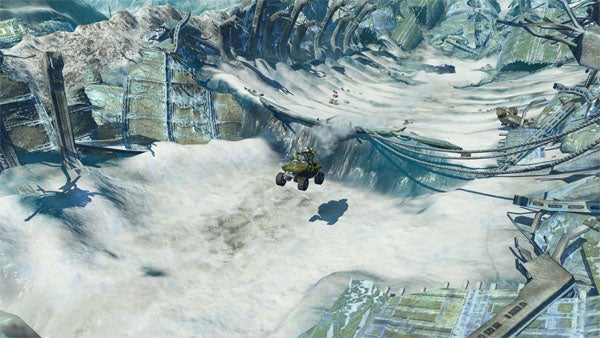 For a start, despite Bungie, as creators of the Halo franchise, maintaining creative control over the game, the nitty gritty of actually developing an RTS for a console is being handled by Ensemble Studios. That’s a pretty good choice as Ensemble has a lot of experience making great RTS games. You may recall it as the studio responsible for the fantastic Age of Empires series, as well as Age of Mythology.


Halo Wars is Ensemble Studios’ swansong and it seems unlikely the developer would want its legacy tainted by having its last creation labelled as a duff. From a development standpoint then, Halo Wars looks to have all the ingredients needed to ensure that it works as an RTS, the only challenge being to make that work on the console. 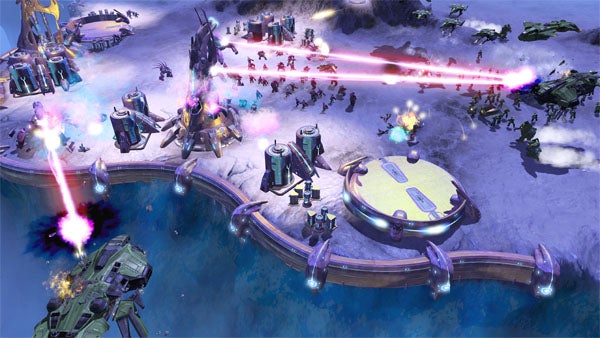 Possibly the bigger challenge will be to persuade fans of the Halo series first-person shooter titles to play a strategy game. And, conversely, to persuade RTS fans to play a Halo game. After all, ‘marines versus aliens’ is hardly a novel premise for such a game.

Perhaps the most brilliant thing about Halo Wars is that as important a game as it undoubtedly is, it doesn’t feel like it’s trying to be. Fundamentally it is what it should be a really good game that that just so happens to be a real-time strategy title and an Xbox 360 exclusive – no more, no less. 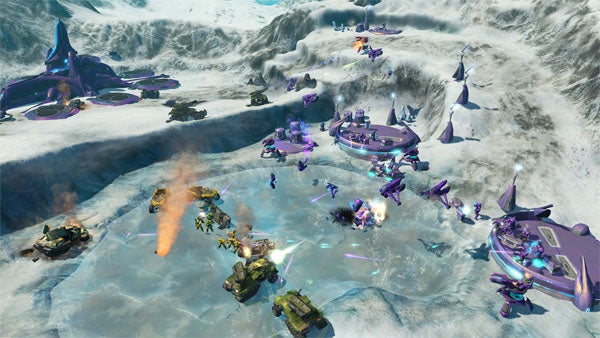 Why is it then that Halo Wars succeeds where so many others have failed? For a start – the ending aside – there’s a genuinely compelling plot; told jointly via in-game dialogue and pre-rendered cut scenes. To summarise very quickly; Halo Wars has you taking control of various members of the Spirit of Fire, a UNSC warship sent to counter Covenant forces on Harvest. Unsurprisingly, that mission doesn’t go according to plan and the Spirit of Fire ends up gallivanting around tackling the Covenant on several planets with an somewhat unsurprising surprise appearance put in by the Flood mid way.


The single player campaign takes place entirely from the UNSC’s point of view with the Covenant being playable in the online or local Skirmish multiplayer mode. It’s a shame the Flood isn’t a playable race as well, but I’ll let that slide given how much fun the game is without them. There’s always room for a sequel, after all. 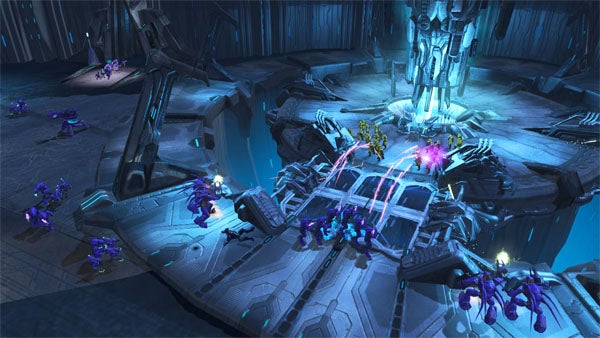 Each level works pretty much the same way. You’re given a base, from which you need to build an army to either win over more bases from the enemy, or complete some other objective. Each level is fairly short and it’s obvious they’re intended to be replayed because as well as the four stalwart Halo difficulty levels, medals are awarded on the completion of each level depending on how well you did.


Additionally there are items called Skulls to collect, which open up some game-changing options in multiplayer. Trust me on this: it’s extremely easy to go the entire campaign without finding a single one of these.

Halo Wars’ gameplay can feel slightly limited compared to a PC RTS. Bases comprise a main structure, with additional facilities, such as a Barracks for training infantry or a Supply Depot for having magical space money delivered – this is used to build, train or upgrade everything and which also fuels Covenant hero unit special abilities. 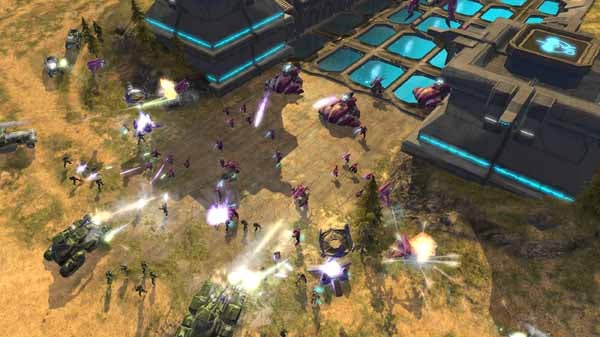 There’s a limited number of bases per map and each base can only hold a maximum of seven structures which leads to a fair bit of strategy. There’s a constant requirement to weigh up the benefits of building an extra Reactor now, which enables access to more powerful units, against the need for additional supplies to actually train those units in the first place.


Seasoned RTS veterans will probably be frustrated to find that all creation of buildings, training of units and upgrading has to be initiated from bases as there’s no other menu for doing so. This is done by clicking on the relevant structure, or empty creation point in the case of buildings, and using the Circle Menu to select the desired action. 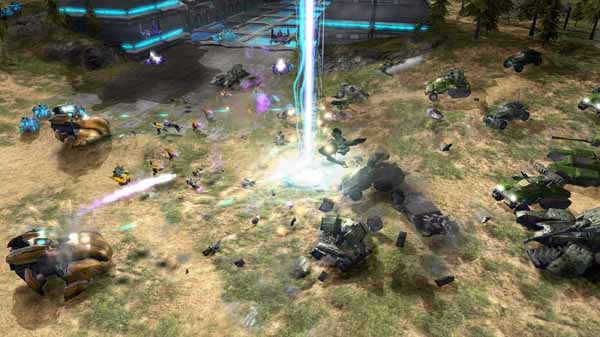 For the most part the right three slots of this circle menu are for creation of buildings and units while the left are for upgrading the same. The only notable exceptions are the UNSC’s Field Armory and the Covenant Temple which are dedicated to upgrades. It’s a deceptively simple yet highly effective system.


The thing that really makes Halo Wars shine for those familiar with the Halo series is how little explanation is needed. I already know that a Warthog will make mincemeat of a few Grunts. I know that SPARTANs are an enemy vehicle’s worst nightmare, although it won’t be my enemy for long. And I also know that if a Scarab appears I’d better get the hell away from it right now if I’m not confident of having enough firepower to take it out. Unless I’m in control of said Scarab in which case my opponents had better be scarpering.

Controlling units is where the limitation of the console input system really show though. Clicking the A button on a unit selects it, while a double tap selects all units of the same type on screen. Holding A expands a circular selection disc which can then be dragged around adding units to the active group and, finally, tapping the right and left bumpers selects all units on screen and across the map respectively.


There’s absolutely no facility for creating groups of units, which makes complicated army management pretty difficult. The right trigger allows scrolling through unit types within a large group, but that’s as close to micro-management as Halo Wars allows. Being able to select specific unit types is important as each has a special ability activated by pressing Y. Marines fire missiles, SPARTAN’s can commandeer enemy vehicles and Covenant hero units unleash special abilities which are left in your direct control. 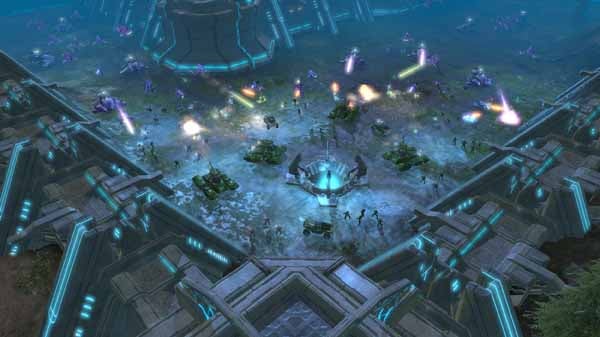 As a result of this limited unit management strategy can often come down to having a good mix of units, sending them all rushing in at once and hoping for the best. In any particular battle the winner is generally decided by which side makes better use of its units’ special abilities. 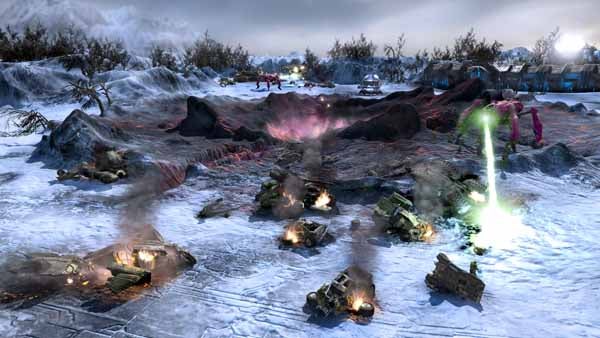 Nonetheless, despite this quite simplistic approach to army management, Halo Wars is extraordinarily fun. Rampaging around on Xbox Live with two Scarabs – sacrificing pretty much my entire unit camp and leaving my bases nigh-on defenceless to do so – while my teammate did the same is simply indescribably fun.


Part of the joy of multiplayer is how well balanced the UNSC and Covenant forces are. The Covenant is probably the more interesting race to play as, with the UNSC being just your generic marine force after all. But each has its strengths and weaknesses and these are enhanced by the requirement to choose a commander before each match, of which there are three to choose from for each race. Each of these offers a bonus and a special unit type to your army complementing different play styles.

Co-op mode is less successful, putting two players in charge of the same base and resource allocation – clearly a recipe for frustration and argument. Frankly either Ensemble should have created a dedicated campaign, facilitating two commanders on the same battlefield, or just not bothered. 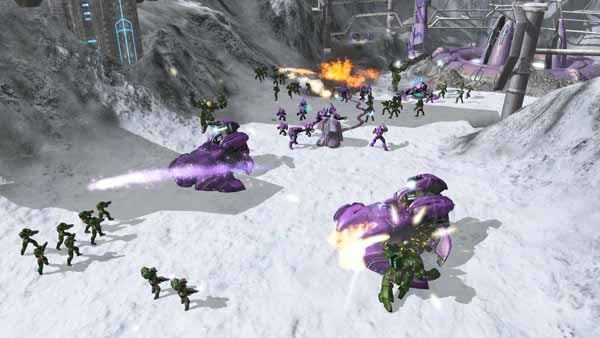 There are a couple of other niggles, too. The Flood in Halo Wars feels a little subdued compared to its previous (or later if you want to think chronologically) incarnations. Yes, it’s slightly frustrating having your infantry taken over and turned against you, but vehicles are immune to the Flood and even a single Warthog can dispense with all but the most powerful Flood units with ease.


Then there’s the ability to garrison infantry behind cover, or in structures. Great in theory but, unlike Company of Heroes where it was a necessity of the gameplay, in Halo Wars it feels like a tacked on afterthought, with cover being placed seemingly at random, often in places where it doesn’t actually offer any advantage and affording infantry little in the way of protection from anything but other infantry. 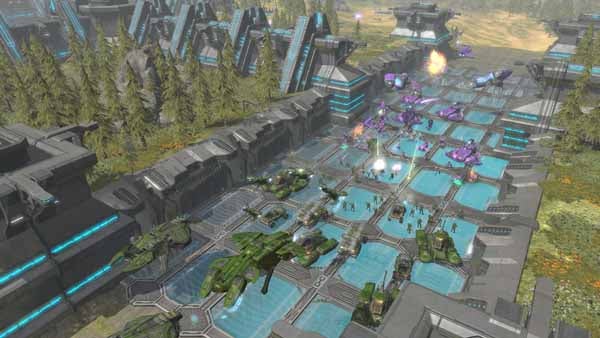 None of these flaws can detract from the brilliance of Ensemble Studios’ creation, though. Halo Wars is a fantastic game. Tom Clancy’s EndWar was a decent attempt to make an RTS work on a console, but didn’t really follow through on that vision, partly because it went too far in trying to revolutionise the way a console RTS plays. Halo Wars on the other hand, does just enough to make an RTS work with a game controller, without losing the familiar feel of the genre. And that alone makes it worth buying.


Halo Wars isn’t Halo. With Halo, Bungie looked at other console FPS games and came up with something completely fresh and, in hindsight, utterly brilliant. Halo Wars is fundamentally no different to any other console RTS, but unlike its peers it works in a console environment. Ensemble has taken an existing formula, tweaked what needed tweaking and polished it to a high shine.