It’s most likely the familiarity of the universe that makes playing Halo 3: ODST such an initially jarring experience. Because despite the familiarity – I know if I take out that Brute first the grunts will just run away – it’s a very different game. 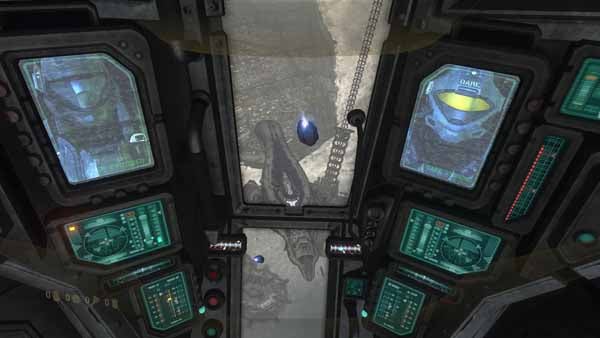 Chronologically ODST is set during the events of Halo 2 and Halo 3, and if you’re a follower of the overarching story you’ll no doubt appreciate the nods and references to the events of the other games. One of these comes as you drop to the surface of Earth and find your pod sent spiralling off course in the wake of a Covenant ship entering Slipspace. Unsurprisingly this leaves you a little worse for wear, and explains the state of New Mombasa when you awake.


Having been out cold for a few hours, the aptly nicknamed newest addition to his squad, the Rookie (known only by that moniker throughout), has become somewhat separated from his team mates, who he needs to find. This means wandering the lonely streets of New Mombasa, which is overrun with Covenant forces. There’s an overwhelming dark and oppressive feel to the city which imbues a sense that all is not well.


As a result, while I’d have been all for taking a run and gun approach with Master Chief under my control, this time around I was inclined to avoid conflict wherever possible. Thankfully there are plenty of overturned vehicles and, yes, chest high walls to cower behind when you’re left with no choice but to fight. 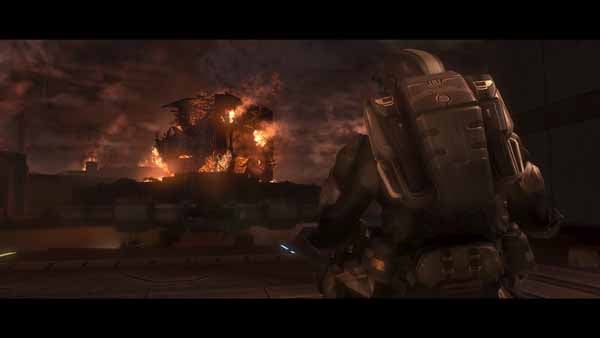 Another reason to adjust your combat style is introduced early on in the game. If you drop from some height to the ground you’ll start huffing and puffing and a bar at the top of your screen (or visor, if you prefer) will highlight the finite nature of your health.


Unlike Master Chief, who could take a massive pounding with nary a complaint, the Rookie has a small amount of shield to burn through before further hits will eat into his health. At this point you’ll be compelled to find a health pack for two reasons. First, low heath is bad – obviously. Second, and for me more pressing, you’ll be subjected to an annoying beep continuously until you heal yourself. After a couple of minutes this get’s very, very frustrating, which is probably intentional.

Despite the fear of health loss, because you have some rechargeable shield hitpoints to wear through before your health takes a hit, you can employ the same run out, unload a few rounds, duck back into cover technique that worked with Master Chief – just don’t try to run up to a Chieftain with a Gravity Hammer and engage in some hand to hand action. This is something of a shame, really, because it means that if you’re careful (and not playing on Legendary difficulty) health packs are rarely, if ever, needed, negating one of the biggest changes in this Halo over the previous titles. 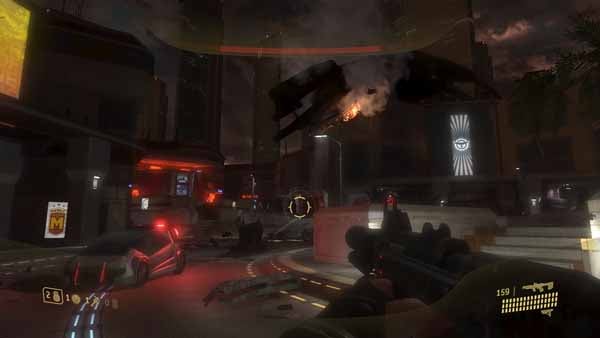 Instead ammunition becomes the most valuable commodity. There are, of course, always plenty of enemy weapons to pick up from vanquished foes, but don’t get attached to any particular weapon because chances are you’ll be throwing it away in a few minutes. This is a minor complaint though because ultimately combat in Halo 3: ODST is every bit as brilliant as it was in the preceding three Halos (We all know Halo Wars doesn’t really count).


That shooting Covenant foes with machine guns, laser rifles and rocket launchers is fun should be no surprise. But what’s really important about ODST is what has changed. The majority of the game takes place through the visor of the Rookie, wandering the dark, moody streets of New Mombasa, your task to investigate the last known locations of your squad members. Interestingly, although the first two waypoints to which you must navigate are fixed, the four others can be tackled in any order of your choosing. 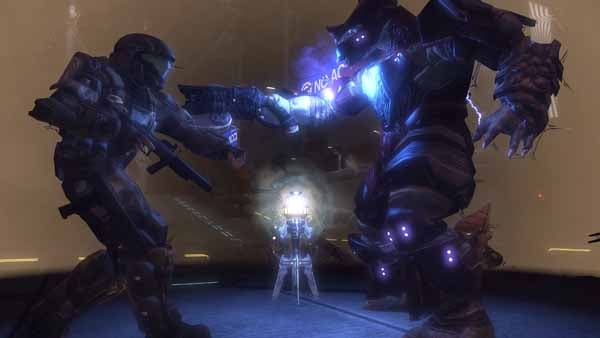 It’s a similar concept to Wolfenstein – minus the Nazis – and it’s all well and good, but once again it’s openness for the sake of it. Bungie even admits there’s an order that ‘makes sense’ in terms of the story, which is presumably what I got by sticking with the defaults because the plot seemed to make sense to me. I’m not criticising the concept of using New Mombasa as a hub world by any means, it’s just a shame that Bungie hasn’t made the order in which you tackle the various waypoints count for something – as it is it feels like a half finished idea.

At least you don’t have to find your squad members’ locations entirely alone. As Master Chief had Cortana as his companion, the Rookie has an AI to provide guidance, though in a subtler fashion. New Mombasa is governed by an artificial intelligence (inspiringly named the Superintendant, the class of AI which it is) which, though unable to communicate directly with you, will offer clues to objective locations by taking control of street level detour signs and the other such computer-controlled displays. 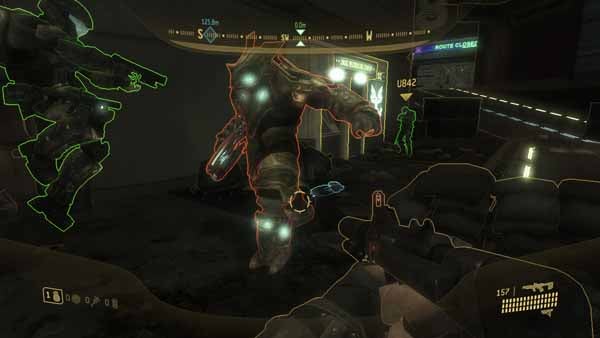 The other, arguably more useful, way to get a handle on your surroundings is through your ODST suit’s VISR system. This not only enhances the light level, greatly improving your visibility given how dark it is at night in New Mombasa, but also outlines the immediate surroundings. Enemies are highlighted in red, friendly units in green.


A third outline, yellow, is reserved for a side quest. Dotted around New Mombasa are a series of audio logs. These let you in on the tale of one of the city’s inhabitants, Sadie, whose father just so happened to have installed a subroutine called Vergil in New Mombasa’s Superintendant, tasked with protecting his daughter and possibly explaining its willingness to help the Rookie. As well as fleshing out the story, finding all of these logs offers an interesting side benefit, the detail of which I won’t spoil. Other games could learn from Bungie’s example here (I’m looking at you Assassins Creed with your stupid, pointless flags). 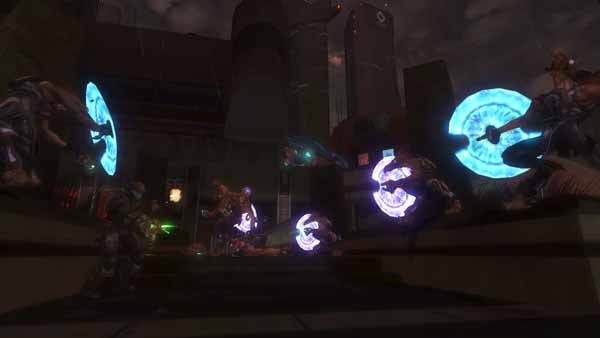 Alas, as you might expect, your squad mates aren’t waiting to welcome you back to the team with a hot cup of Joe. Instead you’ll find some evidence of their presence, be it a helmet or a sniper rifle, but no clue as to where its one time owner is now. At least, you have to presume the Rookie has no clue but luckily you aren’t so restricted. Investigating these artefacts will throw you back in time, to a daytime segment of the game which you’ll play through in the armoured suit of one of the other members of the Rookie’s squad.


It’s these segments that really shine, largely because the characters played through are easier to identify with. Unlike the Rookie who remains nameless, faceless and voiceless throughout – the proverbial silent protagonist – his squad members have plenty of personality. Most notable are ‘Buck,’ ‘Dutch,’ and ‘Mickey’ or Nathan Fillion, Alan Baldwin and Alan Tudyk as Firefly fans might know them. The character Dare is apparently voiced by Tricia Helfer of Battlestar Galactica fame, but as only Andy likes that series (and I mean in the world, not just the office) it matters not (cue hate comments from BSG fans – ed).

It’s entirely possible to complete ODST’s campaign, even on Legendary, in a day if you have absolutely nothing else to do, or to phrase that in hours, easily under eight if you’ve even a modicum of skill. By itself that might not seem like good enough value and indeed, ODST was originally meant as an expansion pack, not a stand alone game. Even the name gives away the nature of the game – notice it’s Halo 3: ODST, not Halo: ODST. Nonetheless it’s an involving and entertaining enough experience to make the ride (and cost) worthwhile. But that’s not a necessary justification because there’s more to Halo 3: ODST than just the single player (and co-op) story. 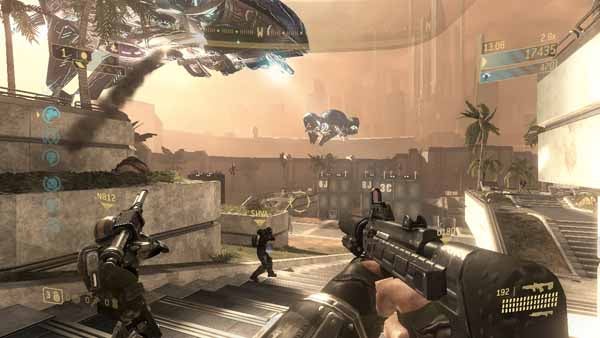 There are in fact two discs in the ODST case. On the same DVD as the campaign is Halo’s answer to Horde mode in Gears of War 2. The basic principle remains the same, fight off wave after wave of progressively tougher enemy forces. However, unlike Horde, Firefight has no endgame making your only objective the inevitable death of you and your teammates and the gathering as many points as possible.


Seven lives are shared between all members of your squad, of which there can be up to four, with extra lives unlocked every 2,000 points scored. As a further twist, the Covenant you face each round are determined at random so it’s hard to be particularly prepared and various combinations of Skulls may be activated, at random, as you progress from round to round, in addition to the Tough Luck skull which is always on. 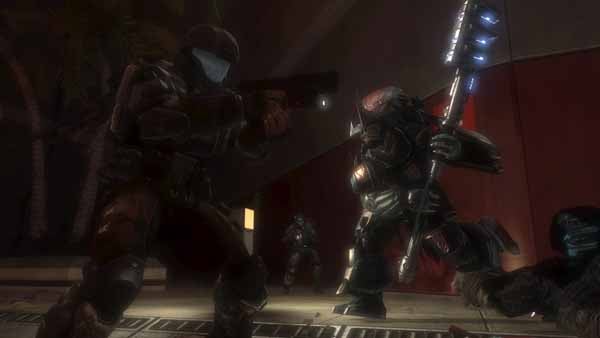 It’s exactly the kind of fast-paced, hectic, and adrenaline-filled gameplay Halo excels at and I absolutely love it. If the success of Horde mode is anything to go by, I think it’s safe to assume Firefight will be seeing a lot of play time in the coming months – if only from me!


The second DVD houses the entire multiplayer part of Halo 3, including all of the currently released map packs giving access to the an already thriving online community, and giving rubbish players like myself a much needed influx of new players of a similar skill level to pay against.


If you have, like I, already acquired all of the Halo 3 map packs then you might feel a little jaded at having to purchase them again. Honestly though, it’s not that big a deal and if it means more players then I’m all for it. It’s been a long time since Halo 3 came out, so you can hardly claim to have wasted your MS Points. Besides which, as I already hinted, there’s plenty more to ODST to justify its cost.


Halo 3: ODST is, perhaps, a little flawed in places but fundamentally it delivers exactly what it promises: the same brilliant Halo gameplay we all know and love, but from a different perspective. You’d be mad to miss out on such excellence.