Let’s face it – Microsoft has been asking for the critical beating that the PC version of Halo 2 has received. It’s taken nearly five years to convert the game, the ‘Vista Only’ restriction seems like a marketing requirement rather than a technical necessity, and the decision to link it to an online games service (where PC owners pay an annual £40 charge for facilities they normally expect for free) is disastrous. 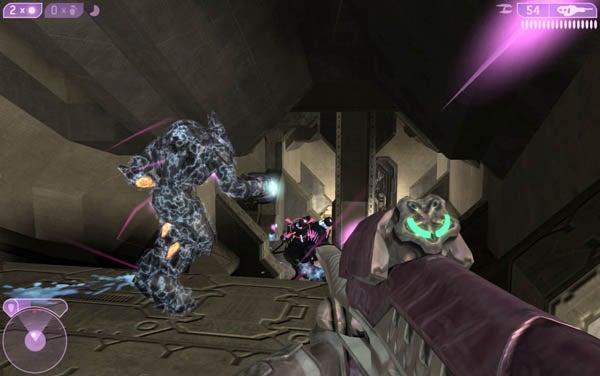 What’s more, it was clear at X06 last year that the PC version of Halo 2 was a fairly basic port-and-polish exercise, not a major graphical overhaul. When Microsoft released a PC version of Halo in 2003, the game just about stood up to the competition. Now with games like Far Cry, Half-Life 2, Call of Duty 2 and Prey around, Halo 2 looks every bit as dated as you might dread. Textures have been enhanced, but there’s little visible in the way of new lighting routines or effects, and the characters and environments are unchanged and at times painfully blocky. Where the art design excels – the covenant troops, technology and vehicles – Halo 2 still has the power to impress, but there are certainly times when the game looks shockingly crude.


To make this worse, a game that ran fine on what was basically a 700MHz Pentium III with 64MB of RAM and a GeForce 3 GPU now struggles to run at a constant 30fps on a dual-core Athlon 64 with 2GB of RAM and a Radeon 1800. It’s really just the filling in the proverbial excrement sandwich. No wonder the PC gaming press has taken to Microsoft’s holy cow like it was a Mexican Piñata. 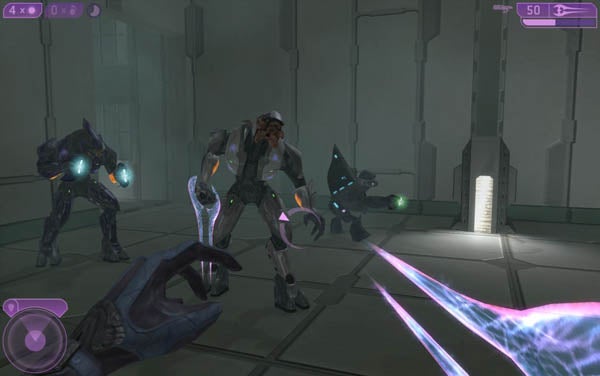 Overall, I can’t blame them. Roll away the ludicrous hype that awaited Halo 2’s original release, and take the dated engine out of the equation for now, and you’re left with the bare game experience. And here Halo 2 has a problem – it just isn’t as good as its illustrious sire. The original Halo deserves its place in gaming history. Innovations like the adaptive AI, the two-weapons-only carry limit and drivable vehicles were a breath of fresh air for the FPS genre, and the game had an epic, space opera feel that no other game of the time could match. It’s actually one of the few games released in the last 10 years that I’ve bothered to complete more than once. Not so Halo 2. On the original release I got about halfway through before losing interest and playing it again I can see why. There are times when Halo 2 hits the same high notes as Halo but not with any frequency. The pacing is irregular and sloppy. The structure doesn’t feel anywhere near as tight.

It certainly doesn’t help that the opening is so flat. The introductory section in the space station feels like a dull retread of the first game’s Pillar of Autumn mission, while the whole sequence of levels on Earth is only fitfully entertaining. Bungie’s art team seem to have been inspired by iD’s infamous ‘brown period’ on Quake and Quake II, creating street after street of brown, boxy architecture and filling them with encounters so uninspired that it’s hard to work up enough enthusiasm to defend the Earth. The vehicle sections seem endless, and with dual wielding – the ability to combine identical or different weapons for added firepower – the only major new game mechanic, you feel like you’re just playing a less exciting version of the original game. Where’s the ingenuity, the set-pieces, the epic feel and the attention to detail that made Halo so superb? 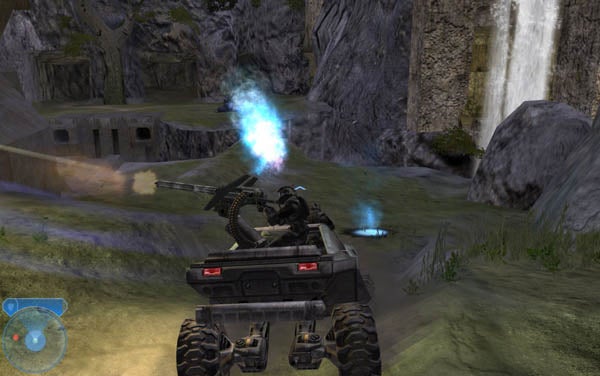 To its credit, the game does gather momentum as it goes on. If you liked the universe introduced in the first game, Halo 2 does a fine job of expanding on it, going deeper into the mythology of The Covenant and introducing a second playable character – the Arbiter – who mirrors Master Chief. This no longer seems like a masterstroke, yet with his cloaking capability and mighty sword the Arbiter does add some much needed variety. Laying the smack down on heretics is fun, and by the time you’re back with Master Chief on another Halo ring-world, the game seems to have picked up nicely. The levels feel more playful and less restrictively scripted and linear, and you’re starting to experiment with the rich and varied weapon set and have fun with the various Covenant craft and human tanks. Before you know it, some of the old epic Halo feel is back. 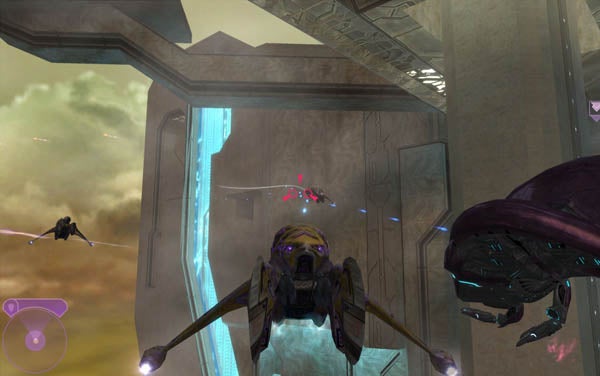 But even so the game rarely hits the same heights. There are some brilliant set pieces to enjoy but a common theme is the tendency of levels to go on and on ad nauseum, repeating the same encounters over and over and over again. Where Halo continually stretched your skills, Halo 2 stretches your patience. We all know Bungie’s magic formula – thirty seconds of fun, again and again – but that thirty seconds is beginning to wear pretty thin by the time Master Chief has infiltrated a Covenant temple and The Arbiter is fighting his way through another monstrous incarnation of The Flood. It’s as if Bungie had analysed the original Halo and erroneously decided that the woefully tedious Library was the bit fans liked best. The storyline is just about intriguing enough to drag you along, but it really is a close run thing at times.

Where Halo 2 still scores big is on character. Whatever anyone says, Bungie has created a universe and an enemy much more interesting than those you’ll find in the average FPS game, and there are times when Halo 2 successfully grasps the space opera feel it’s clearly searching for. Each enemy type is distinctive, and all bar the weakest grunts have some way to challenge and confound you. It’s also a game full of humour; from the whining exclamations of cowardly grunts to the cheerful boasts and verbal backslaps of your fellow troops in combat. In this one area, Bungie still feels ahead of, say, Raven’s efforts with Quake 4. Overall, however, the Halo 2 single-player game just doesn’t stand up to the more recent competition. 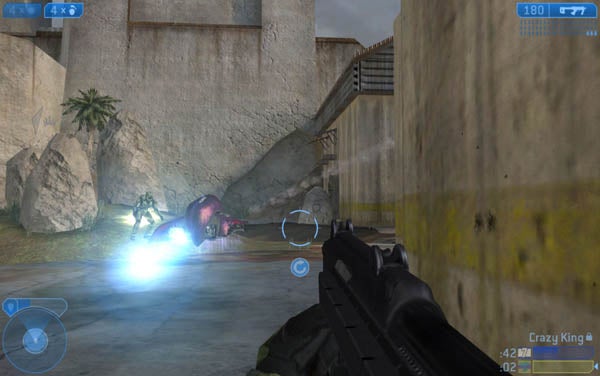 What about multiplayer? Well, it’s still fun, still well-balanced, still packed with great maps, and still supported by a fine selection of options? Play it, and you can still understand why Halo 2 became the gold standard of online console FPS games. On the PC, however, it’s in a much bigger and more competitive arena. Battlefield 2 and Battlefield 2142 do the epic warfare thing better, and Quake 4 has the twitchy, close-in combat side of things sewn up. And if you don’t like those, you still have F.E.A.R., Prey, Counter-Strike: Source, Call of Duty 2 and Half-Life 2 Deathmatch to keep you going. The lobby and matchmaking facilities work brilliantly, but when you add together the various costs of getting online with Halo 2 (unless you already have an Xbox Live subscription) the benefits just don’t add up. 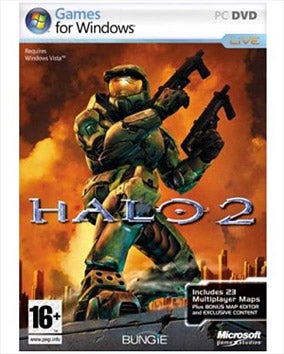 All in all, then, Halo 2 doesn’t really spell great news for anyone. For Microsoft it’s another lacklustre advert for gaming on Vista and the Games for Windows Live service. For us, it’s a poor conversion of a mildly disappointing sequel. For Bungie, it’s a missed opportunity to rectify what went wrong with Halo 2, and an unwelcome reminder to the gaming world that Halo 3 needs to live up to the hype if it wants to stand up against the likes of Gears of War, Haze and Crysis. Buy Halo 2 if you want to get up to date before Halo 3 hits, but if you’re already satisfied with existing PC games in this most over-crowded genre then there’s really very little reason to bother.


Nearly three years on, Halo 2 is looking rough around the edges – a problem this PC version does too little to fix. There are periods when the gameplay makes up for it, but not enough to make this a must-have PC FPS.