H1Z1 was one of the first battle royale games to hit the mass market. But since its 2016 peak, the game has gradually lost ground to Fortnite and Playerunknown’s Battlegrounds, which currently rule the battle royale genre. The PS4 version’s release is the studio’s latest attempt to change this and features a number of tweaks to help modernise the gameplay. Does it deserve to stand alongside the genre’s juggernauts? In some ways yes, but in others definitely not.

The game follows same pattern 1 v 100, last-man-standing battle royale format as its predecessor. It also retains the large map of its PC companion. Graphically it’s very different to its PC counterpart though. Thanks to technical constraints with console hardware, environments have been simplified to let it run at 60fps on both the original PS4 (the system used for review) and the PS4 Pro. The issue is that these changes have brought a few technical issues with them. I still suffered frequent frame rate dips when lots of things where happening on screen at once and screen tearing persistently reared its ugly head. 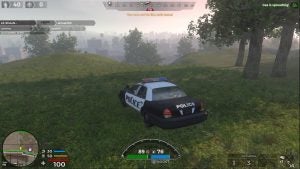 Gameplay has also been tweaked with mixed success. For starters, unlike on PC, you have no control over where you initially drop on the map at the start of a match. A game will begin with you as a player already having deployed your parachute, descending on to a particular area of the map. You may be dropping towards a busy city or housing area, or land near a vehicle and a starting armoury of guns, while other times you could be landing in the middle of nowhere at the very edge of the circle.

This can place you at a serious disadvantage. Even if you are able to find the equipment needed to stand a fighting chance, as for the opening moments of the match you are vulnerable through no fault of your own. At worst, you may not find anything in time, and you could be encroached upon by the toxic gas before having a chance to do anything. The more you play the more you learn where things are on the map, which can reduce the negative impact of a less favourable spawn into a match, but that’s not necessarily the point.

This was clearly done to stop players congregating in one place, but it reduces the tactical elements of a battle royale title, turning it partially in to a game of chance. With such a large world, being unable to choose where to start a match makes it feel small and confined.

Then comes the bugs.  I’ve had awkward falls against a side of a house while parachuting result in me clipping in to an otherwise inaccessible building, unable to leave. Other problems have included me being stuck and unable to exit vehicles. The end result is an unpolished experience that can feel fairly frustrating. 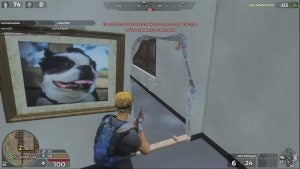 Another big change is that H1Z1 on PS4 utilises a paid for battle pass system that’s split into seasons. The system introduces challenges to help increase their level and unlock extra customisation gear for their character. Though the cost isn’t too large, being available for under £5 in in-game currency or real money, the amount on offer is lacking when compared to other titles.

This is one of a multitude of ways Daybreak monetises the title through cosmetic items. Though it is a necessity as a free title in order to make money, the amount of ways it tries to extract money from players feels excessive. There’s the aforementioned battle pass, then there are separate skin purchases and then on top of all this there are purchasable loot boxes with exclusive pieces of gear. The battle pass itself also has a special tier exclusive for Playstation Plus members. These paywalls are constantly thrown in your face by the game’s menus and are advertised while booting it for the first time, which doesn’t help the game’s overload of monetisation. 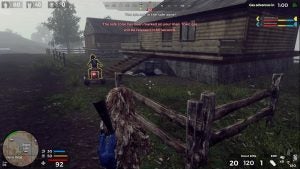 Noting all these issues would suggest that I didn’t enjoy my time with H1Z1 and yet, despite all this, despite the bugs and issues with key mechanics… I did have fun while playing it. Gunplay feels solid, refined and satisfying, vehicles are great for getting around and are good to drive, and whether hiding from nearby enemies or planning an attack on another player, it’s suspenseful and intense.

There’s a strong gameplay loop here for players who enjoy this style of games, one that leaves you wanting to try again instead of feeling frustrated when you fail. Each gun has a nice weight to it, and as the circle closes more and more, there’s an addictive desire to win that keeps you wanting to try again. Grabbing a friend and playing together ramps this up further, and working with someone else I knew was easily the highlight of my experience, as we laughed and enjoyed ourselves while trying to defeat other players and scout out certain areas.

While my criticisms are numerous, and I problems with how the game has been adapted for the system, I would still say this is worth checking out. The core game is strong, with an intensity to the pacing that keeps you wanting to play more. Not only that, H1Z1 fills in a niche on PS4 that Fortnite can’t. Though Xbox owners can enjoy Playerunknown’s Battlegrounds, PS4 owners didn’t have a realistic battle royale title before this. If you prefer the realistic visuals and game design of H1Z1 to the more cartoonish aesthetic of Fortnite then this is definitely something that will satisfy your needs.

It’s a shame that it feels unfinished and that mechanics like being unable to decide where your character initially drops at the beginning of matches does detract from the experience here, but there’s still a lot of fun to be had for fans of the genre.