‘An early-access zombie survival game spends a long time in Early Access, battling technical issues before eventually re-emerging as a battle royale game and finds a massive audience.’ If the modern games industry had to be summed up in a single sentence, it’d be that.

This is the most feature-rich, thoughtful battle royale game around. Fundamentally it plays a lot like its more famous cousin, but woven in and around the essential formula are all manner of pleasing frills and folds. Look at its spawn area – in PUBG and Fortnite it’s a slightly befuddling holding area where 100 players mill around and punch each other. Here, it’s still that, but it’s built with such love and attention that you can’t help but respect it. There are leaderboards off in one direction, some manner of POW camp in another, and a bizarre Mad Max-style arena beyond a set of gates. Why? Because Daybreak felt like it, I can only assume. 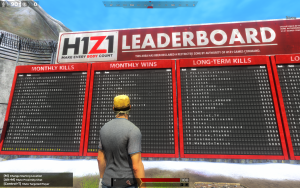 I’m not saying play H1Z1 because it has a fancier spawn area than the rest. I’m saying that spawn area tells you a lot about its overall ethos: like the other battle royale games, but more.

More players, for starters. If you were feeling smug about having outlived 99 others and tasted that elusive and succulent chicken dinner, try facing 149 others. Earlier in its development, Daybreak experimented with even higher server limits of 200 and even 250, but after a few matches on fully populated 150-player servers it makes sense that they’d pare it back a bit: 150 player battle royale is intense, even on a huge map like H1Z1’s. 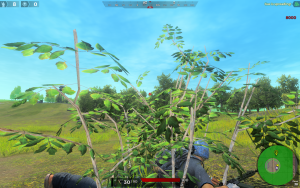 Intense, but not necessarily faster-paced. Unlike its zany and upbeat rival Fortnite: Battle Royale, H1Z1 still gives you time to lay prone in a bush for a while, getting a lay of the land and planning your next move. That’s thanks in large part to its absolutely gargantuan play area, notably bigger than its rivals. If it weren’t populated exclusively by maniacs hellbent on shooting you, H1Z1 would actually make for a lovely holiday spot. Absent is PUBG’s soviet brutalism, and Fortnite’s disarming Pixar quality. In its place a believable sprawl of rural North America (presumably) left abandoned after an unspoken catastrophe. Still, it’s scenic. Perpetual sunshine, plenty of mountains, scenic camping spots and a town centre replete with all the facilities you could ask for. 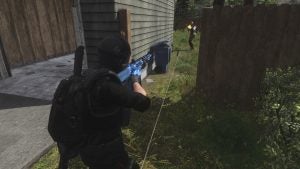 So big is the play zone, in fact, that a recent update allowed the chance to specify a grid position and drop within one particular square on the map. There’s even a heat signature of player activity to inform your pick. Before jumping out of the plane in my first round I selected a drop zone right on the outer edge of it, and later died an undignified and uneventful death having spent the entire round sprinting full pelt towards the safe zone. Throw the old PUBG playbook out of the window – you’ve really got to put yourself at risk when you drop.

The mechanics of dropping down into the fray are a bit wayward – you can’t control the rate you drop at, and navigating laterally to try and land at a particular spot feels stiff contrasted against the rest of the game’s control set. Particularly for players migrating from PUBG (or perhaps migrating back from it having begun as H1Z1 players), it takes some getting used to.

At ground level, though, it’s a slick assembly of code. Strictly third-person, and responsive in every movement, it allows you to concentrate on that suspicious dot on the horizon rather than wrestling with janky collision detection or animations. Due to that huge map size, you’re unlikely to run into other players at anything other than retina-stressing long range until the very latter stages when the poisonous gas reduces the play area to a minimap pinprick of crouching and tension.

Despite a combat update prior to the full release that worked wonders for its previously janky shooting, ultimately Fortnite probably has more enjoyable gunfights, because engagements tend to happen at closer range. H1Z1’s long-range standoffs lack substantial weapon feedback and, for some reason, I miss PUBG’s bizarre-o blood clouds when I shoot someone in this game. Still, the gunfights do at least feel tight and tense, and when you expire there’s no one to blame but yourself.

Related: Smash Bros for Nintendo Switch is coming this year 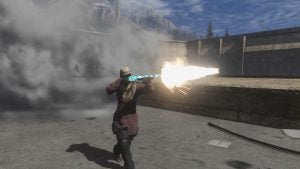 All popular battle royale titles have cheaters to contend with. If you’re unlucky enough, you might fall foul of an aimbot or wall hacker, and developers have their work cut out in policing their vast communities at the moment. I can only speak anecdotally here, of course, but I haven’t experienced brazen cheaters yet in H1Z1’s finished release. Maybe they’re just better at cheating than their PUBG counterparts, or maybe they’re genuinely fewer in number. Just after launch, it certainly doesn’t feel like an epidemic. That gives it quite an advantage on the opposition.

There are gripes to be had with H1Z1 though, despite all its obvious qualities. The first and most prevalent in my particular experience is lag. What a double-edged sword it is to have a permanent latency counter displaying in the top right, as if your inner obsessive didn’t have enough going on with that Shadowplay frame counter to fixate on over on the left. Whether it was there or not, however, lag is noticeable and troublesome on EU servers currently. It’s been a recurring problem throughout H1Z1’s lifespan which appears to have come back for an encore.

One distinct tier of gripe down from that is the plethora of different currencies and customisation options nestled within H1Z1’s menus. Those who prefer to play without microtransactions and the constant persuasion to partake therein have been a bit spoiled by PUBG’s half-hearted implementation. It’s very easy to ignore there, and the visual customisation options are almost risibly incidental. Here it’s different. The customisation goes deeper: weapon skins, different backpack and helmet types, menus and menus of emotes. It’s all up for grabs, and it’s all possible to unlock with hard graft. It’d take a long, long time to do so without dipping into your pockets, though.

I must reiterate that this is a minor point. I don’t want to draw parallels with Star Wars Battlefront 2 and the like, because this isn’t anything like 2017’s batch of predatory games. It’s just a bit of an annoyance.

It just wouldn’t be right to close H1Z1’s review on a downer. It deserves better than that, so let’s use the last of our time together to discuss auto royale. Still in beta, it’s new a car-based mode that might be interpreted as Daybreak’s attempt to win back players who might have started out in H1Z1 for their battle royale fix to later be lured away by PUBG and Fortnite. 30 teams of four players, each with a designated driver, go to battle in an accelerated format which involves jumping over ramps, collecting power-ups, and leaning out of windows to shoot chasing vehicles. That’s the elevator pitch, and you can see the appeal: Rocket League meets battle royale is hard to decline.

However it’s early days. Not too early to say that this probably won’t be what turns the tide and brings players swarming back from other games to H1Z1, because it’s just not as fundamentally satisfying as pedestrian battle royale. But it’s too early to see how much potential the concept contains, because that’s largely up to the community and the convoluted strategies it may or may not concoct. As it stands, it feels like a pleasant diversion from the main attraction, but nothing more. And that’s fine, because the main attraction has the same qualities: the anecdote generation, the underhanded strategies and chance happenings you can scarcely believe took place. And it has bells and whistles on top, like a practice area for unloading various guns on each other in much closer proximity, handy for picking up the nuances of each model and its effective range. 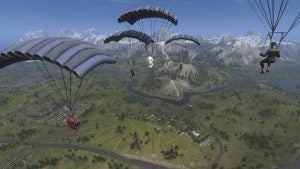 Menus that show your estimated ping on different server regions. A button for switching your over-the-shoulder cam from left to right. An in-game ping counter. These things all feel like added value over the titans from PUBG Corporation and Epic that are currently drawing in the crowds. They’re things you actively miss in those games.

With the advent of its final release, H1Z1 demonstrates a level of thoughtfulness in its design that reflects how closely its developers have listened to players. Whether it’s enough to draw those crowds back to Daybreak and the progenitor of battle royale games is a different story, but H1Z1 deserves a lot of credit for the strides it’s taken towards polishing an inherently rough and ready genre.