You’ve heard of the Wii. The reason I can make this statement with such unflinching surety is that you’re reading this sentence. Which means that even if you have been living under a rock for the past two years, you at least have an Internet connection. And even if you’ve only come across people referring to ‘the new Nintendo’, they’re actually talking about the Wii.


Not to say that vast amounts of people wouldn’t equally recognise the PlayStation or Xbox brands, but ‘that white thing with the part you can wave around’ is definitely more popular. The important question is why. Its graphics, sound and game catalogue are all inferior to its competitors’, and it can’t play high definition media or stream data between devices. No, the reason is ‘the part you can wave around’; otherwise known as the Wiimote. 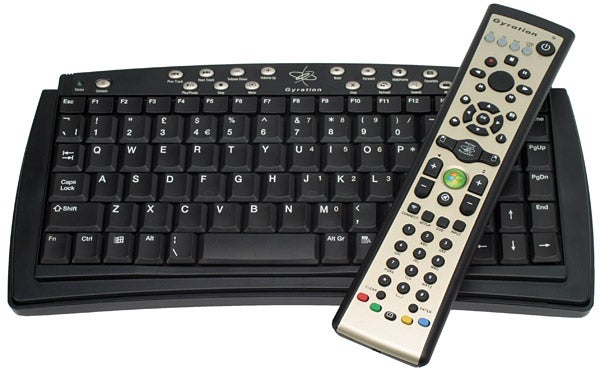 You can wave it around and have stuff happen on the screen because it is in essence a gyroscopic interfacing controller. But contrary to what many people might think, Nintendo wasn’t there first to create such a device. Instead, that honour goes to a company appropriately called Gyration. In fact, Gyration is actually the unknown mastermind behind the Wiimote’s very gyroscopic system.


Which is relevant because today, I’m looking at the Gyration Gyroscopic Media Center PC Universal Remote Control and Compact Keyboard Suite – from now on referred to as the Gyration Media Set. This nifty combo consists of a compact wireless keyboard and the star of the show; the not so compact gyroscopic media remote. There are no drivers included, for the simple reason that neither peripheral needs any. Thus installation is a simple as one could hope: in true plug and play fashion, you simply plug it in, press the buttons to connect each device through RF, and you’re ready to go. 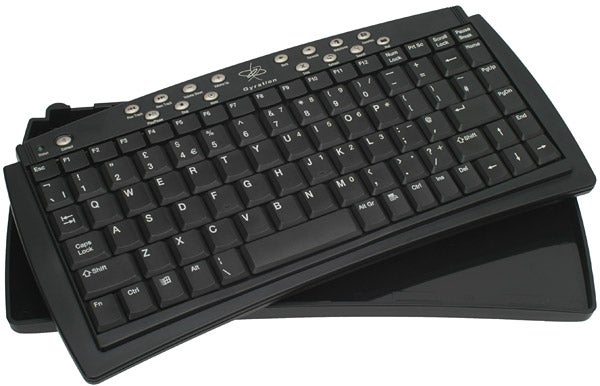 Let’s start with the keyboard, hopefully saving the best for last. It is definitely the smallest example of a ‘sofa’ (wireless media) keyboard I have come across, around the same size as on a 12in laptop. Build quality is very solid, with no signs of flex or creak. In terms of layout, few compromises have been made when it comes to the actual standard keys, with the only concessions being that the number pad is integrated into the letter keys, and the media keys are small and crowded.


Mostly though, the keyboard is actually quite usable. Key response is a bit on the soft side, almost to the extent of being mushy. Travel also feels somewhat inadequate, especially compared to the similarly low-profile Razer Lycosa. But that’s not exactly a fair comparison, as the Gyration model is not only far cheaper, but not marketed as a product particularly suitable for lengthy typing sessions. What it is, is a compact, wireless product that’s easy to hold with one hand, for typing filenames, short emails and messages.

There are few media controls, but then, thanks to the included Windows remote, the keyboard arguably doesn’t need any. And despite being undersized and slightly crowded, the media keys are really easy to press, because of their alternating layout and highly-raised profile. The nicest feature of this keyboard is a strong lid that can either be attached to the bottom when in use, or over the top when you put it away, preventing accidental presses. You could probably sit on it without either damaging the peripheral or causing buttons to be activated. 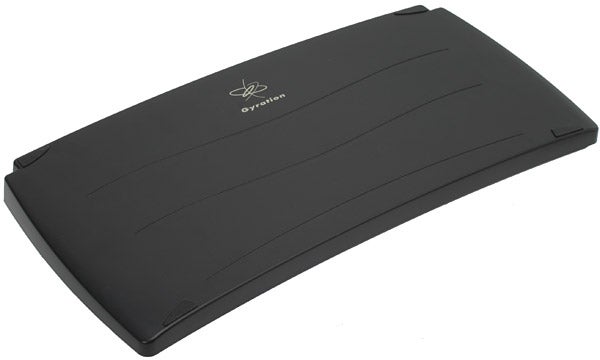 It runs on four (included) AAA batteries. Visually, it is not flashy but neither is it particularly unattractive, despite looking a bit cheap. The Gyration keyboard features a matte black finish on both the keys and surround, with white symbols and silver media buttons.


As such, it contrasts with the Meida Remote, which sets black buttons against a silver surround. But the remote more than makes up for its slightly cheap looks by offering similar functionality to Gyration’s Air Mouse. This causes a little extra bulk which, combined with the reassuring weight and helped by two AA batteries, is actually quite comfortable. The shape is ergonomic and lets your thumb rest naturally on the ‘mouse’ controls. It’s also symmetrical, making it as suitable to left as right-handed use.

The remote’s functions are sensibly divided into several ‘zones’. Along the top is device selection, since the Gyromote (as it shall henceforth be known) allows you to control up to three additional machines, including Televisions and satellite boxes. For this purpose it has an IR sensor in addition to the 2.4GHz RF it uses to communicate with its dongle. This is the same transmission the Logitech G7 gaming mouse utilised, and should mean that using the Gyromote’s air-mouse function will be a lag-free and responsive experience.


The next zone down contains the media controls. Below that are navigation buttons for menus. Then we have the mouse zone, more on which later. Under these are volume and channel controls, the distinctive Windows Media button and connection, setup and input buttons. All the buttons are coated in soft rubber, except the mouse zone which is hardwearing matte plastic. Layout is well-spaced and fairly intuitive, though not quite as comfortable as a Microsoft Media Center Remote.


The Gyromote’s quoted range of up to 30m (100ft) also seems to be accurate, and it stayed utterly responsive throughout my testing. Of course, that testing simply had to include a few rounds of Unreal Tournament 3. And no, there is simply no way the Gyromote will ever match a normal mouse for FPS gaming. But on the other hand, I don’t think I ever had so much fun playing the game before – there is just something so natural about pointing and shooting. If you combine this nifty peripheral with keyboard turning, like in the days of Doom, many shooters should be at least playable.

Of course, gaming is not really the remote’s intended use, but when you consider that what you’re holding is essentially a basic Wiimote without the annoying sensor bar, the gaming possibilities become intriguing indeed. Although, until the unlikely event of a Wii emulator coming along, games that have the most potential to work well with the Gyromote will be homebrew, but you can also experiment, especially with your family; try following pre-drawn lines in MS Paint, or seeing who can draw the straightest line – (you need to get out more – ed.).


Depending on the size of your icons and buttons, it can be quite tricky for normal windows use; but as a mouse for media-center tasks the Gyromote works beautifully. Apart from the novelty factor (it’s bound to impress a few guests that you can move your mouse pointer by waving a remote about), it is far more practical than an ordinary wireless media mouse, which requires a flat surface, or most alternatives integrated into media keyboards, which can be clumsy and inaccurate. 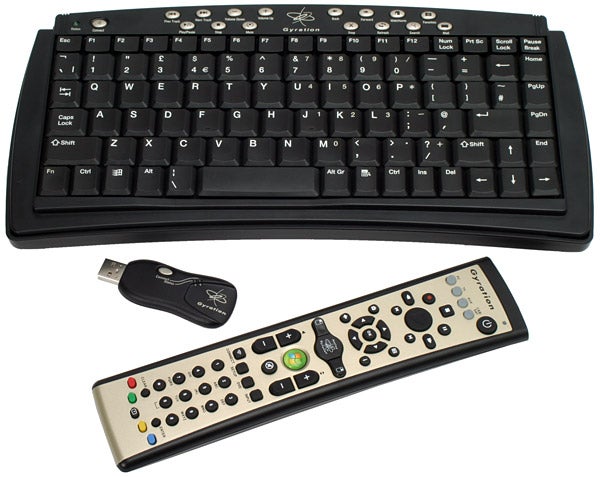 There are two modes to work with. In the standard mode, you have to hold down the central ‘motion’ button for the cursor to move. Once you let it go, your pointer remains stationary, making it easy to adjust the remote’s position without messing up. Or if you prefer, a simple double-click on the central button puts the mouse-control into ‘free mode’, meaning you don’t have to hold down anything and the cursor always moves when you do.


It’s also really easy to press or hold either mouse button while pressing the motion button at the same time, which is necessary for scrolling and other situations. My one complaint with the Gyromote is the absence of a dedicated, convenient scrolling method, as having to position over a scroll bar and then move the remote while holding one or two (depending on mode) buttons is hardly ideal.


Apart from the awkward scrolling, however, it is possible to operate most PC functions with relative ease. You can even put your PC into sleep/standby modes, or power it down completely. Gyration provides a full-colour quick-start guide, and a detailed manual for the remote (including instructions on how to program the remote for other IR devices), as well as a handy USB extension cable for the dongle, which is a nice touch.


Despite its layout making it possible to use in the dark, it’s a pity that none of the buttons (except device selection) are backlit or even just glow-in-the-dark. But overall the Gyration Media Center PC Universal Remote Control and Compact Keyboard Suite – to once again give it its full name – is an innovative, reasonable quality set, that certainly has an edge over its competitors. It’s not cheap, but for just a little more than Logitech’s competing MX Air, you get not only the gyroscopic pointing device but also a universal remote and compact wireless keyboard.


‘The world isn’t flat, so why should your desk be?’ Gyration states on its website. And in the case of the (deep breath) Gyration Media Center PC Universal Remote Control and Compact Keyboard Suite, why have a desk at all? This is definitely one of the more compact and desirable input device sets around, providing a keyboard that’s easy to hold with one hand, and a gyroscopic remote that not only makes controlling media functions easier than ever from your couch, but allows you to experience some games in a whole new way – or even invent your own.