‘Air’ is a popular marketing buzz-word. It’s been used in the naming of all manner of products including notebooks (MacBook Air), wireless iPod docks (AirZone Dock), and even broadband routers. However, before these, it was already in use to name mice; specifically, Gyration’s Air Mouse and Logitech’s MX Air Mouse, both of which are based on technology developed by Gyration (now owned by Movea). 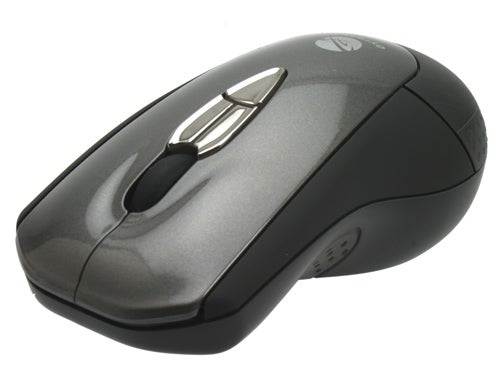 Naturally this was the first thing I asked Movea’s vice president, Greg Smith, at the product’s unveiling, and he assured me that despite sharing the same name this is quite a different rodent to its predecessor.


So what’s changed? Well, the new Air Mouse has been redesigned from the ground up and now has MotionSense: a fancy term that refers to the addition of a three-axis accelerometer to the older mouse’s two-axis gyroscope. This not only makes motion sensing more accurate, but also means lower power usage and a ten times shorter wake-time. The other major internal change is a move from an optical sensor to a laser one. All this should make control smoother and smarter, both on the desk and off. 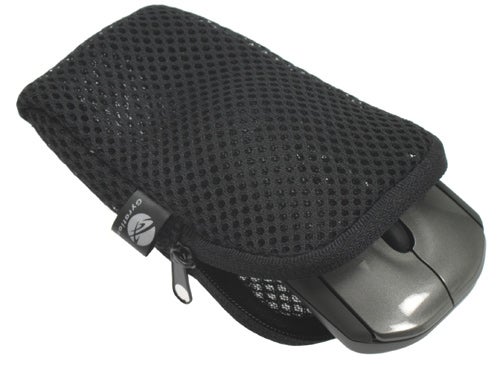 In the packaging, you get the mouse itself, a small RF dongle, a zippered meshwork carrying pouch and the GyroTools CD. There’s a full-colour, multi-lingual quick start guide, too, that breaks down the process of setting up and operating the Air Mouse in an easy-to-follow way.


In terms of design, the Air Mouse has about as much in common with the original as a pebble with a brick. It’s now only a little bigger than Logitech’s V550 Nano Cordless Laser Notebook Mouse, and like the V550, it has a slot for its dongle, though rather than taking the mouse apart, it just slips neatly away into the back – perfect for keeping everything together when out and about. 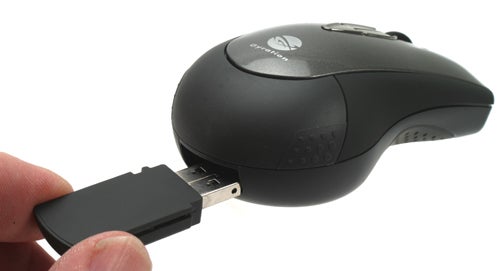 The mouse also looks the part. The main body is matte dark grey to match the scroll wheel, while the top, including the finger buttons, are a pearlescent light grey. The three function buttons below the scroll wheel are chromed, which lends the device some extra class.


Battery installation is very finicky if you follow the instructions and try to pull the battery cover off while pressing the indicated points. Instead, we found that a fingernail or flathead screwdriver did the job more effectively. It’s a bit annoying, but not something you’ll need to do very often.

Like most high-end wireless RF mice on the market, the Air Mouse and its dongle come pre-paired, meaning you only have to plug it in for instant aerobatic antics. The motion-sensing technology will work with pretty much anything; it’s safe to assume that if a standard mouse works, the motion-sensing Air Mouse will too. This means it’s compatible with Linux and Mac OS X; though to get most of the advanced functionality you’ll need to install the GyroTools software, which for now only works with Windows XP and Vista.


Before we get into the software and assess the Air Mouse’s gyroscopic motion-sensing goodness, let’s first see how it performs as an ordinary mouse. 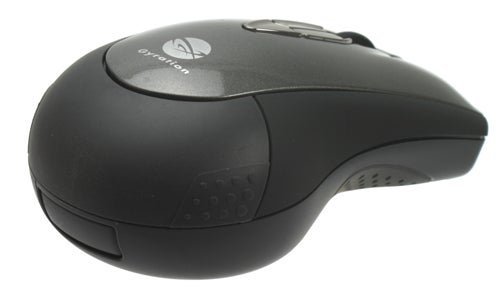 Well for a start, the Air Mouse’s laser sensor means it can be used on a variety of desk surfaces of varying colours and textures without getting confused in the same way many optical mice can. But unfortunately, when used as an ordinary desktop rodent for day-to-day tasks, it just doesn’t match up to models from Microsoft or Logitech. Its tiny Teflon feet, for example, make it difficult to move smoothly across a cloth pad – though to be fair it works just fine on any hard surface.


Furthermore, its tracking isn’t quite as smooth as we’d have liked, although this is only really noticeable if you’re looking hard for it. Rather more disappointing is the lack of a four-way scroll wheel. While it’s not the only mouse on the market to shed this feature – Raptor Gaming’s M3 Platinum Laser Mouse is another – it’s still a tad disappointing. 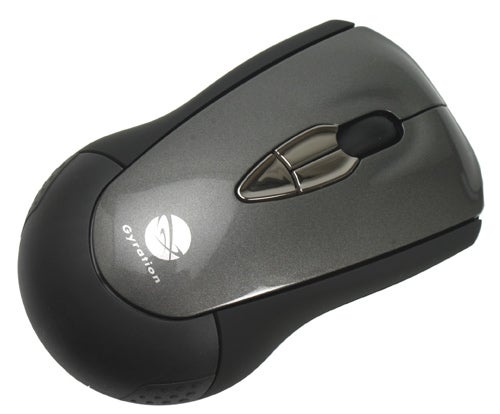 Yet another niggle is that when scrolling down, the deeply recessed position of the wheel can result in your finger catching on the slightly sharp edges of the two function buttons just below the wheel – the same ones that will occasionally snag on the pouch’s meshed material as you remove the mouse.


Despite its ergonomic curves, the Air Mouse isn’t as comfortable in the hand as other mice of its size, like Logitech’s V550 Nano Cordless Laser Notebook Mouse. This is partially because the V550’s two AA batteries give it a reassuring weight whereas the Air Mouse’s pair of AAAs make for a lighter experience. However, this does seem sensible considering you’ll probably want to wave it around a lot. Also like the V550, Gyration’s symmetrical design makes it equally usable for righties or lefties (something which, as an ex-southpaw, I always appreciate).

So using the Air mouse like any standard mouse isn’t that remarkable, but what about its motion sensing capabilities?


Activating the motion sensors is accomplished by pulling a soft-touch rubber-coated trigger on the device’s bottom, though without GyroTools installed it can also be turned on by holding any of the three chromed buttons below the scroll wheel. Be aware that the trigger is tiny, and despite a small ‘ridge’ to make it easier to grip, it is far more difficult to operate than on the original Air Mouse. 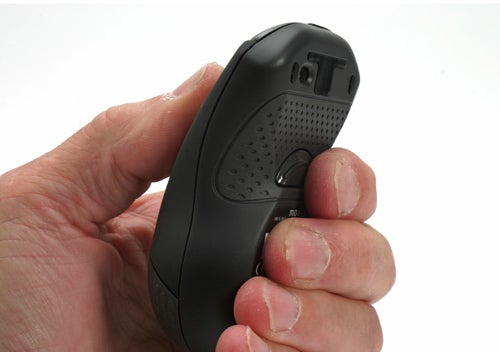 Keeping the trigger pressed while trying to operate the buttons on top of the mouse with your thumb (as suggested by the user guide) is awkward too. In fact, ergonomics has in some ways taken a back seat in favour of portability. That said, you can avoid holding the trigger constantly by pulling the trigger twice in order to keep the motion sensors permanently activated.


By now you might be thinking the new Air Mouse really isn’t worth bothering with – but despite its many little (and some bigger) flaws, that would be doing it a disservice.


This is not the first Gyration product we have reviewed, with that honour going to the Gyration Universal MediaPC Remote and Keyboard Suite, but it is by far the most sensitive. The extra sensors make a perceptible difference, and culminate into what I think is the most accurate motion controller available today. Range is also fantastic; even standing outside the office, about 25m away from my computer, the Air Mouse was still transmitting flawlessly. 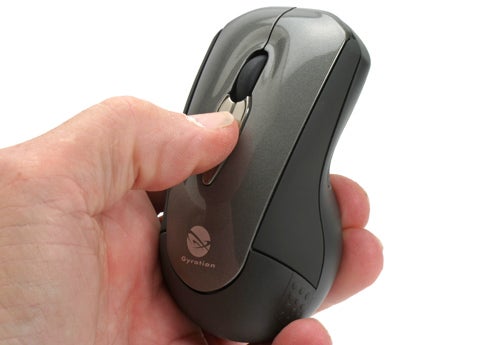 To control the cursor, you can just flick you wrist, though I occasionally found it more comfortable and intuitive to move my arm from the elbow. Movement, meanwhile, is accurate enough that you can select individual letters from a word in a document.


Some of the features, especially for the multimedia and business user, are locked away in the included GyroTools software. This all-new version to go with the all-new mouse consists of a tiny install file of under two megabytes.


Installation is simple. Just insert the CD, let it autorun, and after installing the driver you’re away – no reboots or registration required. Unfortunately, you can’t download software for the mouse yet from Gyration’s website, so those with netbooks or otherwise lacking an optical drive might want to copy the CD contents to a memory key first.

GyroTools uses a very intuitive double interface: the bottom row of tabs let you select various types of function for a range of applications, while the top tabs let you select which ‘part’ of the mouse you want to assign the functions to – not only its buttons and wheel, but also specific swipes and gestures, including shake.


The flexibility GyroTools provides is simply excellent. In addition to buttons, swipes, shakes and hotspots there are customisable events which include keyboard shortcuts, and a variety of function shortcuts for General use, Internet, PowerPoint, Presentation, Media, Input and Windows. For each lower tab, these functions are represented by clear icons, which can simply be dragged into boxes representing the mouse’s various buttons and gesture-controls in the top panel. Best of all, you can assign all these settings and options to one of a limitless number of profiles, so when you want to switch applications, simply switch profile. 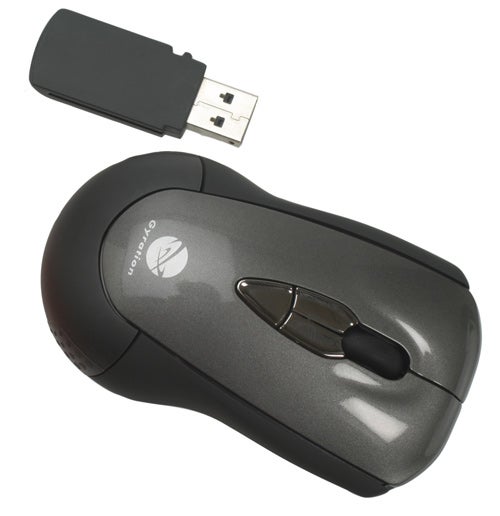 Media functions are fairly self-explanatory, and allow you to do things like swiping the mouse left to right to turn the volume up. But presentation is where Gyration has really gone to town. You can summon giant arrows or a large selection of other pointers, and place permanent markers in your document. You can hide or highlight text using highlighter or ‘spotlights’, and everything is size-adjustable in real-time by holding down a mouse button and dragging through the air. Put simply, there is no more versatile tool for presentations than the Air Mouse with MotionSense. On a side note, input options include various virtual keyboards and number pads, so theoretically you could do everything a keyboard can. 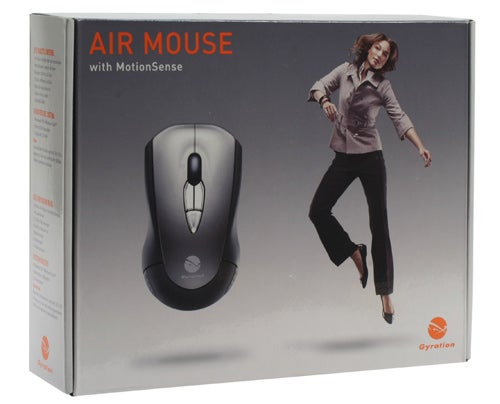 Aside from Logitech’s MX Air Mouse and Gyration’s own previous generation product, there’s nothing out there like the Air Mouse. And though it has taken a small step back in terms of ergonomics, it’s now more portable and internally much improved over its predecessor. Not only that, but it’s available for around £60, making it not only more versatile but also cheaper than most presentation tools, including the MX Air. Don’t forget it’s also a capable media remote, and as for the gaming-potential – that pretty much warrants a review by itself; suffice to say you’ll discover whole new ways to play old games.


Flawed in some ways, but brilliant in others, the Gyration Air Mouse with MotionSense is probably the best all-in-one tool for presentations, remotely controlling media and some unique Wii-like gaming on the PC. Now if only the company would bring out a version emphasising ergonomics over portability…