Competition seems to have bought out the best in Activision and Neversoft, and forced the publisher and developer to not just contend with Rock Band, but try to find somewhere new to take the series. That this Guitar Hero would feature bass, drums and vocals for the full band experience was only to be expected. That it would provide would-be Guitar Heroes with a way to create their own music was not, and while Guitar Hero: World Tour still has a few failings, it’s the combination of these features with a still excellent single-player mode that makes it such a compelling proposition. 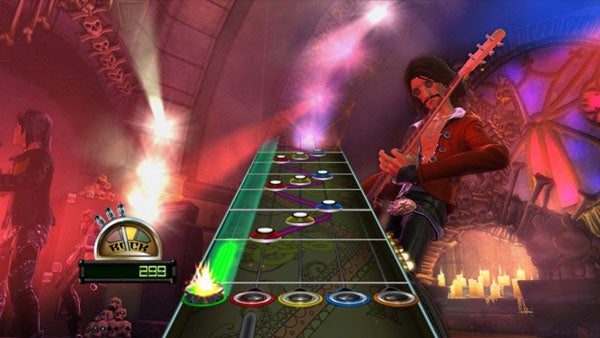 In many ways, Guitar Hero’s instruments are an improvement on Rock Band’s. The Microphone remains wired, but the drums are wireless, velocity sensitive and swap one of the Rock Band kit’s four pads for a high-hat and cymbal. From memory, the rack is also a little easier to put together and a bit more rugged in use than the Rock Band equivalent. The wireless guitar, no longer a Gibson copy but with a look close to a gorgeous Paul Reed Smith, is probably the strongest axe peripheral yet. It’s larger than GHIII’s Les Paul, the strum bar is slightly less clicky and the whammy bar has a nicer feel, and most importantly it has a new touch sensitive area on the fretboard designed specifically for high-speed hammer-ons and pull-offs – even tapping – during solos. Don’t despair, however, if you’re too strapped for cash to upgrade your old six-string. The slidebar, as it’s called, can only be used in a few specific sections, and from personal experience you tend to score higher if you use the regular five, colour-coded buttons instead. Maybe it just takes getting used to, but I found it weird and unpredictable. 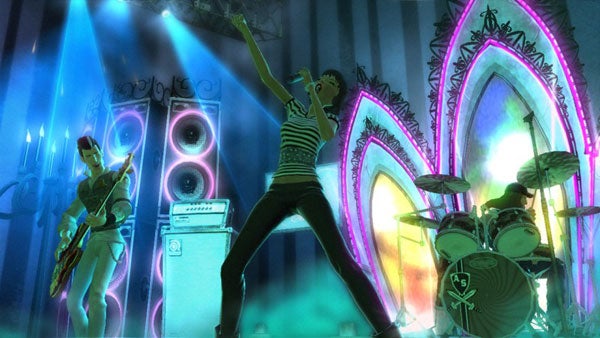 Interestingly, World Tour doesn’t go too far in copying Rock Band’s model. Where Rock Band felt like a dedicated multiplayer game that could be slimmed down to suit a single player, World Tour feels like a single-player game that has been opened up to include three additional players and their new instruments. Structurally, the single player and band career modes are broadly similar to what we saw in Guitar Hero III, though this time there’s less of a ‘life of a band’ narrative. Instead we just get a selection of gigs taking place at different venues around the world. With the storyline a little of the tongue-in-cheek rock myth humour has gone, but in recompense we get more star cameos – this time Billy Corgan, Ozzy Osbourne, Zakk Wylde, Sting and Ted Nugent, among others, do the honours – and a longer, more satisfying game. 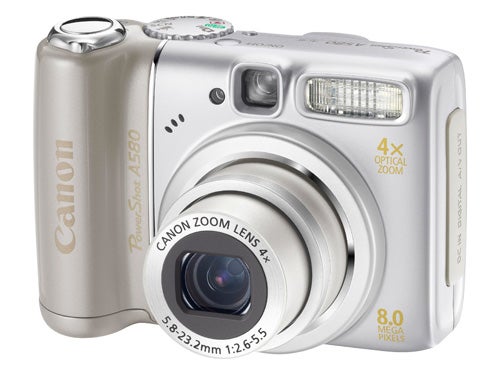 Why? Well, obviously there are more songs and stages, but the game’s success really comes down to the tracklist and the note placement. At times, the way GHIII laid out notes on the scrolling fretboard seemed to be more about making the player’s life difficult than giving you the feeling that you were actually playing the song. In World Tour, the placement is usually more logical and more intuitive. The tracklist, meanwhile, is probably the series’ best, covering all the bases from eighties rock (Living on a Prayer, the Eye of the Tiger) to soft rock classics (Band on the Run, Go Your Own Way, The Joker) to nineties alt-rock (Nirvana’s About a Girl, Smashing Pumpkin’s Today, Jane’s Addiction’s Mountain Song) to British hits (Some Might Say, Love Spreads) and even country (Willie Nelson!).

Better still, the GH gods have finally answered our prayers and bought us Eddie Van Halen, with Hot for Teacher and the legendary (and fiendishly difficult) Beat It. Throw in Hotel California, Are you Gonna Go My Way, Hollywood Nights and a double dose of Hendrix and there’s plenty of stuff that anyone who’s ever played air guitar will want to try. Sure there are a few duds, but any game featuring 86 songs will have some, and – in my opinion – they’re pretty few and far between. Plus, every single one is an original master recording. 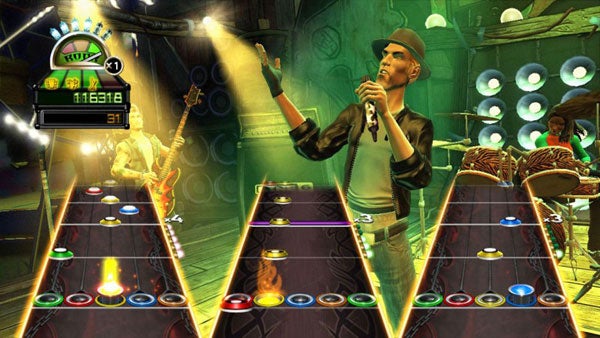 There isn’t a huge number of tweaks to the formula – it’s still strum the bar while holding the right button at the right time as the tablature scrolls down – but generally speaking this is a slicker, more player friendly affair. The boss battles from GHIII are back, but they’re more musically engaging and less gimmicky than the old ones, and the difficulty curve is more spike-free. You can’t help thinking that the game’s major new addition – the slideboard – could have been used more consistently and more interestingly, but it doesn’t do anything to spoil the game. In fact the only negative thing you can say about World Tour’s gameplay is that the formula is beginning to get very familiar, and with familiarity always comes some contempt. Much as I love the new songs and the way you play them, I have to admit that there’s little really new and exciting to experience in this version. 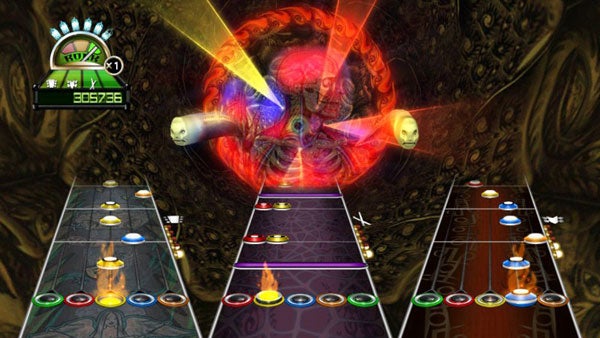 Still, on other levels Guitar Hero is really catching up with Rock Band. The EA/Harmonix rival made GHIII look a bit rough and cartoony, but World Tour brings real improvements to the way the performance of the band is captured visually, with more concert video-like editing and the best, most detailed stage settings the series has ever seen. Whether fairgrounds, black-metal venues or festivals, each is oozing – sometimes literally – with lifelike touches. Meanwhile World Tour is the first Guitar Hero to allow you to create your own rocker and their guitar, and if the lack of licensed guitars is a slight loss to the GH atmosphere, the prospect of putting your own custom hero on the stage is more than ample compensation. 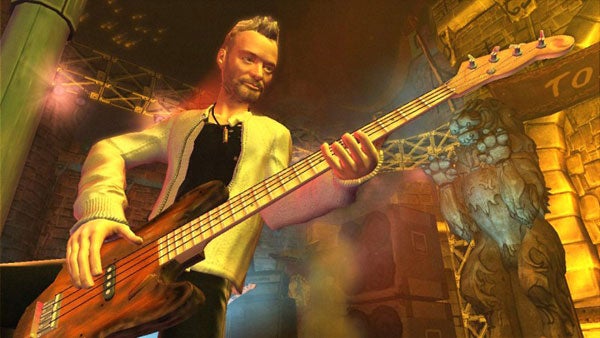 As a single player game, then, World Tour is as good as Guitar Hero gets. As a band game, however, it’s still not quite as good as Rock Band. Credit where credit’s due: the drums work brilliantly and the cymbals add to the overall would-be Neil Peart feel. The microphone is sensitive and the vocal tracks are just about demanding enough for the average singer, while World Tour actually makes the bass player work for a living by throwing in an open strum on top of the regular five fretted notes. However, World Tour’s band career mode just doesn’t have the atmosphere of Rock Band’s. It’s partly that it doesn’t even try to capture the progression from bar band to stadium masters, and partly that – for some reason – the impression it creates during a gig is more of two to four soloists working independently than of a band coming together for a performance.

The mechanics have a little to do with this. In Rock Band the band as a whole can save a track even when one member falls down, and you can always use Overdrive (Rock Band’s version of Guitar Hero’s Star Power) to bring a bad player back into the song. In World Tour the failure of one player will nearly always result in the failure of all four, and while any player can use the Star Power that the band as a whole has built up to save their own bacon, the effect isn’t quite the same. If you want to play with three mates in the same room, then Rock Band (and potentially its sequel) is still your game. 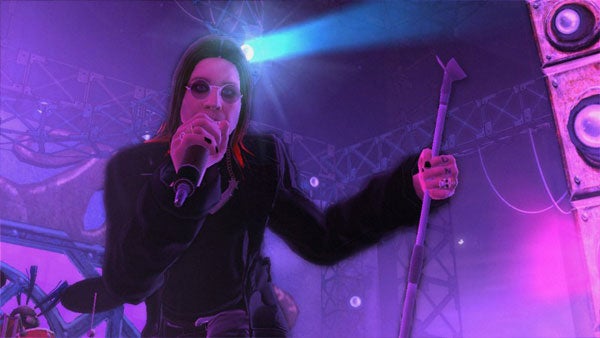 To counter that, World Tour has the stronger package when played online. Not only can you start a band online or hunt for an ad-hoc one, but the additional cooperative and competitive modes make for an enjoyable quick-and-dirty blast of online showboating (or humiliation). If you’re looking for a game you can play on your tod, rather than a party game, this tips the balance back in World Tour’s favour. 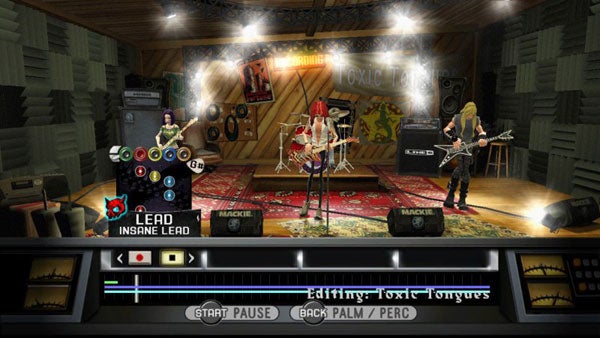 Of course, we still haven’t got to World Tour’s other major selling point: music creation. Effectively, you can use the game as a virtual studio, laying down tracks of guitar, bass, keyboard and vocals over either a preset drum track or one you create yourselves. The big problem, you might think, would be the use of a controller that only provides five notes, but World Tour gets around this by allowing you to switch between different scales. Making great sounding music isn’t easy. Heck, making something even vaguely listenable is hard. However, it is just about possible, and the new GHTunes online service is already sharing user-created tracks that show some of World Tour’s potential. Will anyone ever create a hit using World Tour? Probably not, but then I never thought GHIII prepared you for a six-night run at Wembley Arena. It’s fun, and if it gets would-be Guitar Heroes a little closer to making real music, all the better. 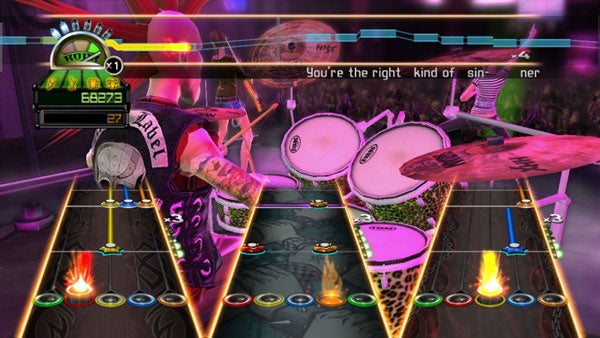 And, in the end, fun is what Guitar Hero has always been about. I still think Rock Band gives you a better feel for life in a band, but World Tour is – even more than Guitar Hero III before it – the better game for those wanting straight single-player and online action. Of course, my opinion might change when I get my hands on Rock Band 2, and before you commit to either line of products you might want to check out the relevant setlists and DLC packs to see if there’s anything that pushes you one way or the other. If not, then think about how and who you play with and – if you want a guitar game – World Tour is a good way to go. 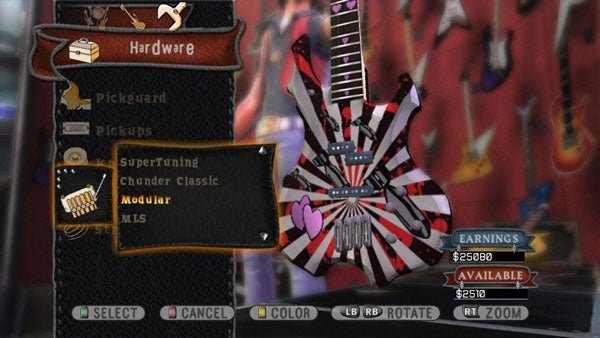