First up, an admission: I’m afraid I can’t describe this as the definitive review of Guild Wars: Factions. It’s an enormous game, packed with content, and much of that content is inaccessible until you hit the highest levels of the game. If you wanted a truly definitive review, with every aspect of the game explored, I’d have to say that I’ll get back to you in three months’ time. 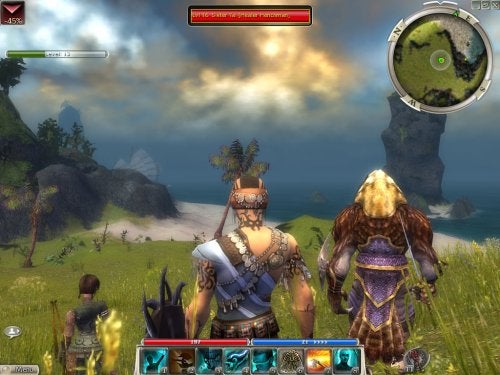 Admittedly, it’s the same story with most MMOs, but then (to recap for those who haven’t come across the game before) Guild Wars really isn’t like most MMOs. Here levelling isn’t the be-all-and-end-all – lucky in a game that caps players at what at first seems a miserly level 20 – but the means by which your character reaches ‘ascension’. At this point, you have the power you need to handle any challenge in the game, and probably the equipment to match, which makes the important thing the skills you have at your disposal, and the ways in which you employ them. That makes Guild Wars more a test of abilities than endurance or available time. Once you’ve put in the hours to ascend, you don’t face any serious disadvantage if you can’t commit half your waking life to the game.


That’s not the only Guild Wars difference. The lack of a monthly subscription has effects beyond the obvious benefits to your wallet – it ensures that Guild Wars is a game you can dip into and out of over a period of many months, without needing to worry whether you’re getting value for your money. It’s a game you can flirt with and spend the odd weekend with without making a longer-term commitment. What’s more, the game works hard to make things easy and entertaining. You can travel instantly to the major points of the map, and take on AI-controlled henchmen if you can’t find or don’t want a party of real human beings. 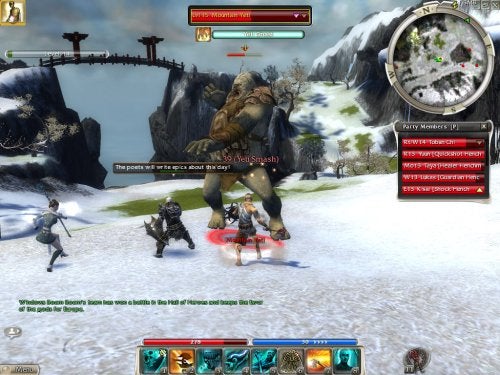 And unlike most MMORPGS, the game adopts an approach where you share hub areas with other players, but once you and your party go adventuring you’re moved to a unique ‘instanced’ area that you’ve got all to yourself. Not only does this ensure that you’re not queuing for the next monster or at risk of stealing another players experience, it also enables the game to take a more story-driven approach. Guild Wars even staves off intra-party conflict. Captured gold and experience are shared out equally and any items that monsters drop are assigned automatically to players. It’s full of fantastically sensible bits of games design, and that’s given the game a feel all of its own. You can drop in, gather a group together for a mission, and then leave once the job is done. The whole game is a no-strings affair.

Recap over. The question you’re probably asking is, if I didn’t get into Guild Wars, why should I care about Factions? Well, first of all, it’s half expansion-pack, half stand-alone sequel. If you’ve already conquered the original Guild Wars ‘Prophecies’ campaign, you can transport your character over and tackle the high-level quests immediately. Good for you. But if you’ve never played Guild Wars before, Factions is a fantastic place to start. It’s low on dull beetle-killing missions early on, and it doesn’t take long to amass some decent skills and equipment. 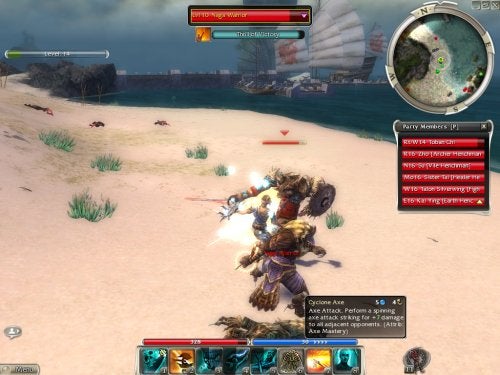 More importantly, Factions really feels like a different spin on the game. The new continent, Cantha, is more than just a variation on the original European fantasy theme – it’s a complete shift of setting and culture to a world of Oriental adventure. Think Wuxia. Think of a thousand Hong Kong swordplay movies. Think Hero, Crouching Tiger, Flying Daggers. There are new monsters to match, from the turtle-goblin kappas, to the snakelike nagas and fearsome oni, and new skills to emulate martial-arts based attacks. There are even two new hero classes: the assassin, with a range of killer skill combos and trap capabilities, and the mysterious ritualist: a blind, tattooed sorcerer who can summon dark spirits to his aid. 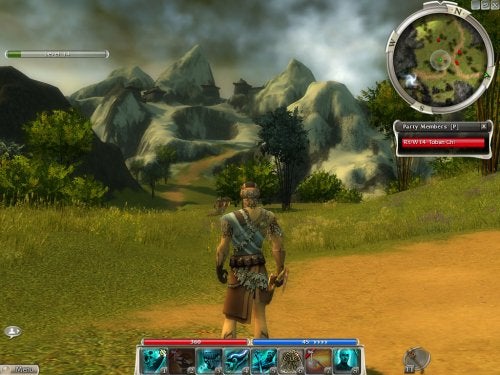 A major part of the appeal is aesthetic: Cantha is probably the most beautiful world presented in any MMORPG. In fact, on an artistic level it’s up there with the worlds of Jade Empire and The Elder Scrolls: Oblivion as the loveliest in any RPG, full-stop. It has the gorgeous, mountain vistas of China, stretches of stunning coastland straight from a Thai beach paradise, and some gorgeous examples of Oriental architecture, posed dramatically on waterfalls or in the midst of a flowered valley. And the amazing thing is that you’ll see all these things in the first few hours, then realise that you’re just on a starter island, and you haven’t even seen the continental mainland. Once there, you still have some astonishing sights in store, including a vast urban sprawl of grand civic squares and tumbling, high-rise shanty towns, and an inland sea of frozen jade that is one of the most imaginative and interesting settings I’ve witnessed in recent video games. Add in some genuinely sweet warm lighting, and you have a magnificent achievement.

However, a visit to mainland may turn your jaw slack for less positive reasons. The opening missions are extremely well played, slowly opening up the world and teaching you the major skills without you even really noticing. Most can be done with the aid of the aforementioned henchmen, though the game cleverly includes a scattering of crucial missions where you need to band together with other players to survive – Factions wants you to play well with others, after all. Quests don’t go far beyond the usual errand-boy and kill this, collect that stuff, but their nature is cunningly disguised with wodges of narrative. Many even see you getting assistance from high-ranking computer controlled characters. 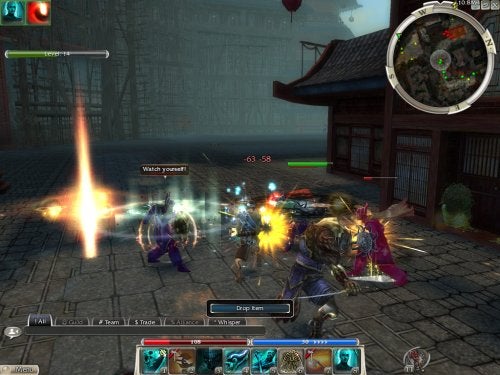 Towards the end of your stay on the island, things get tougher. Even secondary missions require the assistance of a large group, and your henchmen are worse than useless. Get used to it. On the mainland, the difficulty level goes up another three notches. On my first visit, I found myself wiped out in seconds in most explorable areas, and the majority were impossible – or at the least very hard going – without the aid of other, real human beings. From this I learnt two things. Firstly, it’s a waste of time tackling the mainland missions until you have got as much experience and equipment as possibly from the initial island. Those players who will only take you on a mainland mission if you’re above level 15 aren’t just being grumpy – they just don’t want to spend half their time resurrecting your useless behind. Secondly, this is a game you can play solo, but if you want to get ahead, it’s best to get involved. 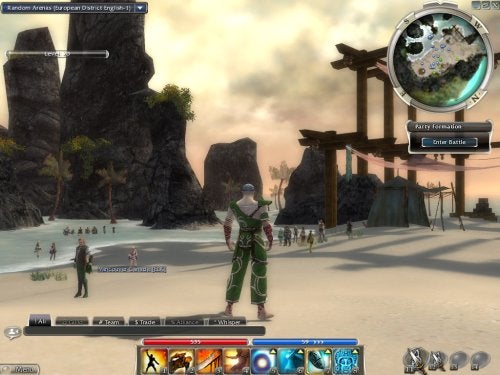 Joining a guild will help – and unlike World of Warcraft this doesn’t mean joining raids where you will risk your virtual neck while some foul-mouthed oddball with a Napoleon complex swears at you from the sidelines. However, Factions goes beyond the player-formed Guilds of the first game to incorporate wider factions, apparently vying for control of Cantha. You will eventually end up signing to one faction or another, and later in the game you will even face missions where groups from rival factions will be tackling them at the same time. It’s a clever touch, because it won’t have any impact on the new player during the early stages of the game, but it means that Factions has something extra for those who stick with it in the later stages.

And the Factions concept works particularly well because Guild Wars has always been a competitive game. The Player Vs Player element is practically a separate option: you actually create a new specialized PvP character for it, who starts automatically with a range of skills and equipment at level 20. The feel is as much like a multiplayer FPS as it is an RPG, partly because the game types take in variations on deathmatch and capture the flag, and you can compete in random matches, team battles or in grand tournaments that see groups from Europe battling rivals from Asia and America. If ever there was a game that reminded you that there’s no I in TEAM, this is it. In a game where combat isn’t reactions-based a balance of styles is vital, while healing and resurrection skills are desperately important. 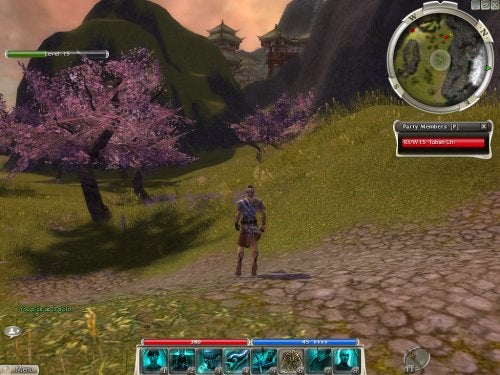 As you’ve probably gathered there’s an awful lot to deal with here, but if there’s one thing I want you to take away from this review, it’s that Factions is a spectacularly entertaining game. It’s as compulsive and addictive as any MMO I can mention, but it doesn’t make you work nearly as hard as some before you have your fun. True, it doesn’t have the wider social aspects of World of Warcraft or Everquest or the complex crafting options. Nor is it as full of riotous self-expression as City Of Heroes. Yet I’d be hard pushed to recommend a better MMO for those who want a game rather than a secondary job and lifestyle. It’s the sort of experience that stays on your mind long after you stop playing, and one you can’t wait to get back to when you find yourself with an hour or two to spare. So, while I might never write that definitive review, I can still see myself in Cantha three months down the line. Guild Wars: Factions is that good.


Factions takes the irresistible, accessible gameplay of Guild Wars one stage further, and ties it to a beautiful oriental setting. Maybe other MMOs have the edge on social life and long-term depth, but this one was built for pure enjoyment, not employment. 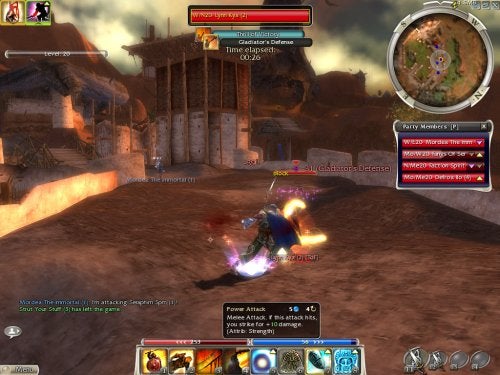