There’s something universally cute about someone who can’t quite speak your language properly. Whenever I attempt to speak German or French on my travels, you can see smiles of endearment spread across the faces of the locals as my pigeon attempt to piece together their language falls flat on my face.

Likewise, if I ever stumble across someone from Europe visiting the UK asking for directions, I tend to want to wrap them up and take them home as they dress our somewhat functional language with an accent far too decorative for English prose. That cutesy, “awww” appeal – for want of a better phrase – is something Guardian Sword has in spades, albeit unintentionally. This match-three battler has some of the worst, most bizarre translation issues you’ll ever come across in a game, along with some fairly basic visuals that make the whole affair feel a little home spun. But that doesn’t stop it being fun to play.

On a critical level, if you pick apart Guardian Sword to its bare bones, there’s nothing especially new or unique here. This is a match-three puzzler in the Best Fiends mold, where instead of switching symbols or items to line them up in rows of three or more, you have to trace your finger across existing match ups to remove them from the board. As in Best Fiends, these symbols don’t have to be in a straight line, either – diagonal match ups count, too, which means you can piece together especially long runs. 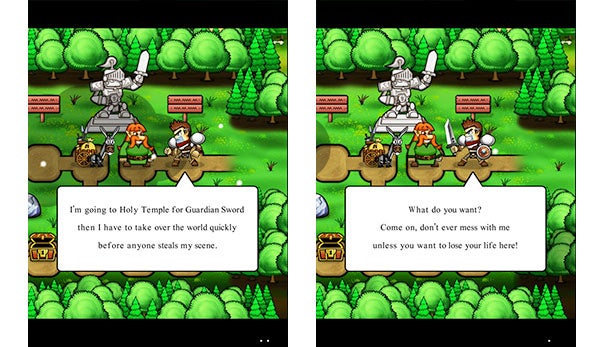 The different coloured symbols, however, are split into three groups. There’s a long range attack – firing an arrow, for instance – that shows up as yellow on the board, with red symbols triggering a close range (or sword) attack. Matched green symbols mount your defences, while blue symbols build up your Mana, which you can use to launch special attacks when full up. Taking on a string of different beasts in each round, it’s your job to manage your attacks within your turn effectively, taking care to attack within your first two moves before stringing together a sufficient number of green tiles to ensure your rival doesn’t sap all too much of your life.

And that’s quickly the routine you fall into. Travelling along from point to point on a map in order to complete some kind of quest or other (which, unless you’re the kind of player who needs some kind of of in-depth plot in order to take on a match three, doesn’t really matter), battles are simply a case of landing one or two attacks during your turn before ensuring your shields are up for your rival’s counter-attack. Developer Picsoft has thrown a few curve balls in there to keep things interesting – such as tiles with special abilities, such as the ability to poison your opponent, sapping life force from them with each turn – and the game has an extensive shop where you can buy all kinds of trinkets to revive your fortunes in a tricky battle. 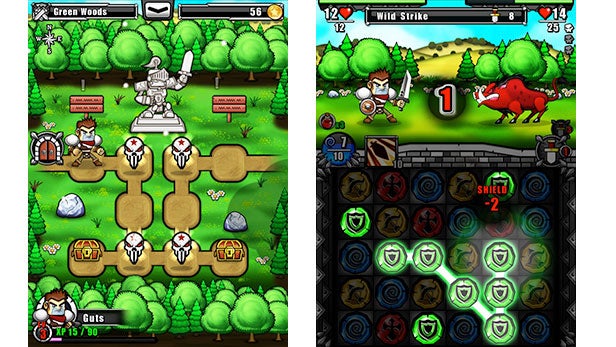 However, the big flaw in Guardian Sword is, unless you play the way the developer has intended, you don’t get to play at all. Successful battles enable you to upgrade particular attributes in between rounds, though the game leaves it up to you which ones you upgrade and when. What Guardian Sword doesn’t tell you, however, is that unless you upgrade your Mana limit early on, you won’t be able to unlock a special move that is the only way to kill an opponent later on. With no way of knowing that’s what you need to do to progress, you’ll soon find yourself stuck taking on the same battle over again, unable to rectify the situation unless you spend some cash.

It’s unlikely to have been an intentional move to get you to part with your cash – it seems more likely that it’s a genuine oversight or bug – but it does add to the home spun feeling that runs throughout; a dodgy script, some especially basic visuals, a fairly uninspiring take on the match three genre and a game stalling bug all mounting up to chip away at any credit the game gets for being fun to play. 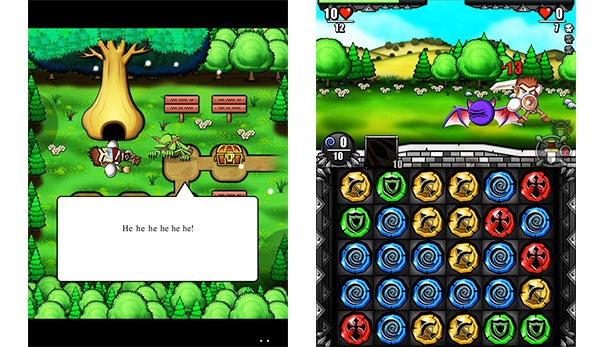 It all leaves Guardian Sword as a game that’s unlikely to offend all that much if you decide to take a punt on it, but likewise, is probably one to skip unless you insist on taking on every single match-three puzzler that rolls on to the App Store, or you have a penchant for badly written English, in which case we’d suggest it’d be cheaper to simply start reading one of our rivals.

Verdict
Without making any real attempt to bring anything new or noteworthy to the table, Guardian Sword’s take on the Best Fiends style match-three puzzler still manages to be fun to play, though an especially dodgy script, some poor visuals and the odd bug ensure that Picsoft’s latest isn’t exactly a classic.