It’s almost too big
to judge. There’s so much to GTA 5 – so much world, so much
story, so many characters, so much to do – that it all gets a little
overwhelming, hard to get a handle on. Yet this game is in many ways the
culmination of Rockstar’s work of the last ten years, rolling in
everything its learnt from GTA 4, its DLC extensions, Red Dead
Redemption and Max Payne 3.

A sprawling, open-world crime epic, with
three protagonists, three interweaving storylines and a setting that
encompasses a huge urban area and a sizable chunk of the coast and open
country that surrounds it, GTA 5 makes you rethink how you use words
like ambitious. There aren’t many developers with the talent and
expertise to build something like this. There are even fewer with the
money to. 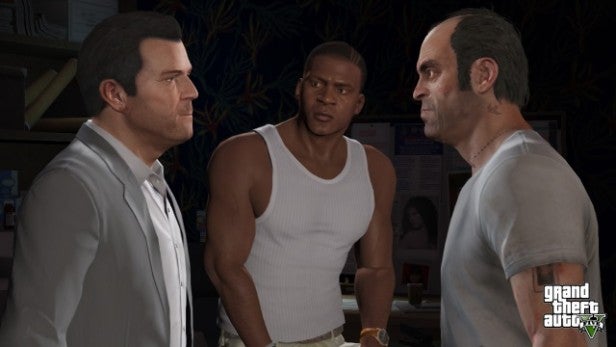 GTA 5’s great innovation is the use of three protagonists rather than one.
After a brief prologue sequence you start the game as Franklin, a young,
ambitious former gang banger working for a suspect car dealer. GTA 5
uses this initial period to get you used to the fundamentals of the
gameplay before throwing in Michael, a retired master thief supposedly
living in a rich, domestic dream, but actually in the grip of a
disastrous mid-life crisis. Franklin becomes the catalyst for Michael’s
return to crime, and this in turn introduces Trevor. Unhinged,
ultra-violent and psychotic, Trevor is the most extreme anti-hero GTA
has ever produced.

It
would be doing you a disservice to tell you more of how this all pans
out, but we can talk about how it works in the game. Some of the time
you’re restricted to the one protagonist, but generally you can switch
between the three, doing a mission or two as one to move the plot
forward or waste a little time, then switching to another when you want
to move their storyline onwards.

At specific points the plotlines
intersect, and you have missions involving two or three of the
protagonists. Here you can switch from character to character when it
makes sense to do so, and sometimes the game makes the switch for you.
Each has his own set of talents, not to mention his own special
capability – involving slow motion, increased damage, added resilience
and faster reflexes in motion – making switching a crucial part of the
action.

There’s more to this choice than gameplay. Having three
protagonists enables GTA 5 to explore different stories, different
themes and different styles of GTA. Michael has the smarts and the
experience, but is trapped by the choices he’s made. His missions focus
on setting up jobs and protecting what’s his. Franklin wants what
Michael has, but might not know the real costs of getting it. He’s
looking for the money, but also the respect.

Trevor, meanwhile, is the
rogue factor. In some respects his tale plays out like a redneck
Scarface, and he’s a natural focus for the mayhem that GTA 4 was
missing. Yet there’s also more to Trevor than at first appears. He might
be a monster, but he still has principles, maybe even feelings. 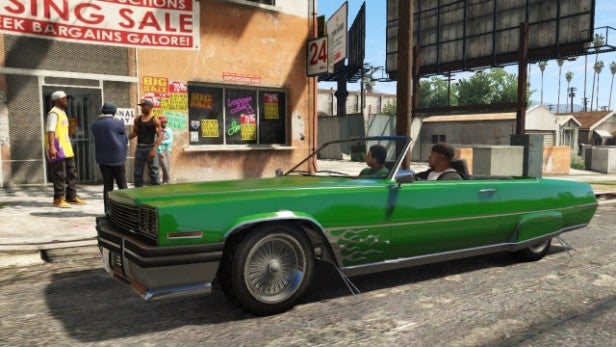 GTA 5 returns GTA to Los Santos, the focal point of GTA: San Andreas. Based
on Los Angeles, it’s both larger and more detailed than it appeared in
the earlier game, partly as a result of Rockstar’s decision to omit the
other two cities of San Andreas and concentrate on one. It’s a smart
choice. While Los Santos doesn’t have the density or the numbers of
pedestrians of Liberty City, it captures the feel of Los Angeles, and
there’s so much to do both in the urban neighbourhoods and the
wilderness beyond that the setting is utterly immersive.

Nobody
does this stuff better. From the side-characters, to the pedestrian
chatter, the shop signs and billboards, the TV stations you can watch
and the websites you can visit using the laptops and computers sprinkled
around the world, Los Santos comes away as one of gaming’s most
convincing and detailed alternate realities. It’s not perfect – it never
can be when you can run over pedestrians with impunity and cops forget
you after losing sight for a handful of minutes – but if it was perfect
then it wouldn’t be any fun.

Beyond
the city limits the game opens up in the manner of GTA: San Andreas and
Red Dead Redemption. There are hick communities, decaying motels and
bars where you can almost smell the stench of beer, blood and vomit.
There are also hills full of critters and coyotes, and farmsteads where
creepy families are brewing crystal meth. Like Red Dead Redemption, GTA V
can get awful pretty. It’s a world you want to explore. 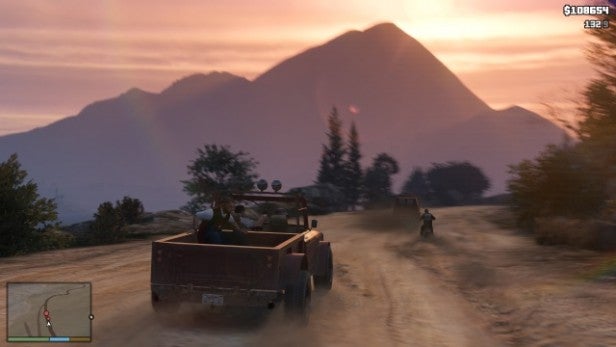 Of course, you
know the basics of GTA gameplay by now; you steal, you drive, you
shoot, you break into places and take things you shouldn’t be taking.
Rockstar has wisely adopted shooting mechanics refined in Red Dead
Redemption and Max Payne 3 to make the action smoother and more
engaging, and once again the mission designs do a fantastic job of
disguising any repetition in the formula.

Within
a given session you might be wrecking the house of cuckolding tennis
coach, robbing a jewellery store and tackling a gang of bikers. You’ll
find yourself driving bikes, ATVs, buggies, jetskis, boats, trucks,
heavy plant machinery and a wide range of cars, not to mention piloting
helicopters and planes. There are stealth sequences, sniping sequences
and all-out shoot-outs, and it all hangs together very well. Those who
found GTA 4 a little slow-moving or po-faced will be glad to hear that
GTA 5 sees a return to the free-wheeling mayhem of GTA: San Andreas and
GTA: Vice City. It starts with a bang and rarely lets up.

And of
course there are numerous side-activities. Paparazzi need help to get
their crotch shots, there are drugs and guns to courier by train or
buggy, wild beasts in need of hunting and races to win. There are
drug-crazed arcade action sequences and bounties to be earned. You won’t
be bored, and if you tire of Michael’s current missions, you can always
switch to Trevor or to Franklin and see what they have on their slate.

The
heists are the most exciting new spin. As soon as your associates set a
target you can choose the crew and choose your approach, before
tracking down any additional equipment needed and doing any recon that
the job requires. Once in play you take each protagonist through their
part in the plan, watching as – hopefully – it all comes together.

The
heists are GTA at its most thrilling and evocative, bringing in elements
of every great caper movie you’ve ever seen.

SEE ALSO: Best PS4 games to look out for 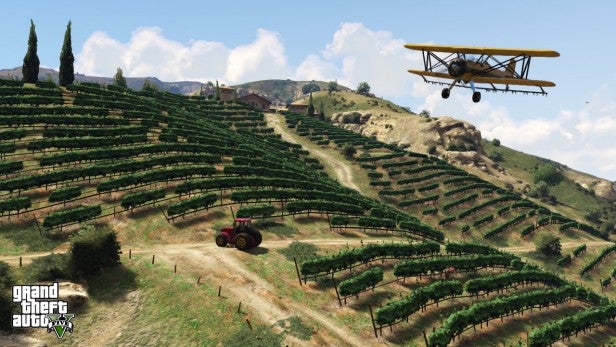 It’s an incredibly rich, huge and enjoyable experience, so much so that we could forgive a few graphical quirks. But Rockstar’s
RAGE engine has come on dramatically since GTA 4, and GTA 5 follows on
from Red Dead Redemption and Max Payne 3 in delivering realistic-looking
characters, detailed scenery and impressive, cinematic lighting. GTA 5 isn’t quite up there with modern benchmarks like The
Last of Us or Crysis 3, but there’s a pay-off in the massive draw
distances and the sheer scale of the settings. The important thing is
that, whether you’re driving around the city or watching a close-up
cut-scene, it’s hugely atmospheric and believable.

As ever,
sound and music play a key part too. We’ve already touched on the
effects of the radio chatter and conversations, but GTA 5 also captures
the pleasure – as introduced in GTA: Vice City – of doing really awful
things to a weirdly apposite soundtrack. Ramming vehicles off the road
to Chicago’s ‘If you Leave me Now’ certainly qualifies, and the use of
gangsta rap, hardcore punk, classic rock and country, all selectable at a
tap of a button, helps make the game come alive. The between-song
chatter, the adverts and the weasel news reports remain a highlight, and
prove that GTA has lost none of its satirical edge.

Saints Row 4 might
be funny, but this is funnier, edgier and a whole lot smarter. 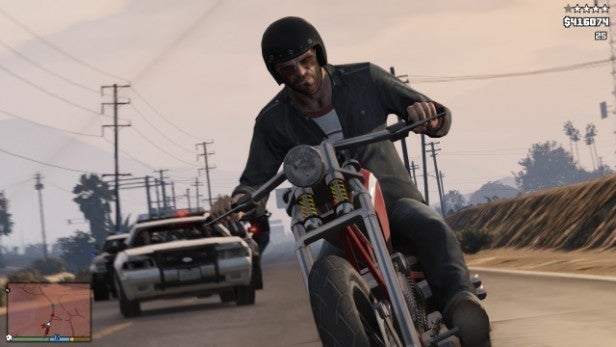 In summation, There’s
very little to complain about in GTA 5. Earlier bugbears like poor
checkpointing, restrictive save systems and ropey gunplay have now all
fallen by the wayside, and the overall impression is that this is
Rockstar at the very top of its game. If we have any slight criticism of
GTA 5, it’s this: that it’s arguably more fun, minute to minute and
hour to hour than GTA 4 or Red Dead Redemption, but the story doesn’t
quite have the same depth or power.

Niko Bellic remains the most complex
and intriguing protagonist in GTA history. There was something uniquely
compelling about his story, even if there was a noticeable dissonance
between the serious story and knockabout gameplay. GTA 5 avoids this
split, and the interweaving storylines are put together with incredible
skill, but there’s a slight sense that it’s not quite so rich in its
themes overall.

Yet it’s hard to moan about that shift in
tone. GTA 5 is still more interesting, more sophisticated and more
layered than any other game in its genre – or most any other genre – and
it’s every bit as exciting, illicit and addictive as any previous GTA.
If GTA 4 was a controversial triumph, then GTA 5 resists any controversy
bar the usual moral panics. It’s a great GTA, and so – inevitably –
another landmark video game.

Verdict
With its multiple
protagonists and interweaving storylines GTA 5 is the most sprawling and
ambitious GTA yet. There’s so much to see here and so much to do that
you might as well forget about playing anything else for the next month
or two. Yet the amazing thing is that it holds so well together. Playful
and dramatic, satirical, sophisticated and shocking, this is Grand
Theft Auto at its very best.