Come 2012, analogue broadcasts will be a thing of the past, and if you can’t afford to replace your analogue TV then a Freeview receiver offers the cheapest and most convenient way of getting digital channels on your old set. Although you can pick them up for next to nothing in supermarkets and online, it’s still worth giving your potential purchase the once-over to check that it boasts all the features and connections you need to incorporate it into your system – and that’s where we come in.

From a distance, this budget box from Grundig – a brand whose resurgence in the UK has been boosted recently by its involvement in Freesat – is surprisingly good-looking for such a low-cost unit. Its curved, uncluttered fascia and matte finish give it a pleasantly esoteric vibe – in fact if it weren’t for the DVB logo on the front it would be hard to tell what it was. It’s only when you pick it up and feel its light and plasticky bodywork that you’re reminded of its budget price tag.


A quick glance at the rear panel is also initially deceptive. Our eye was drawn to the USB port, which could have opened up the possibility of playing back MP3 files or viewing JPEGs, but sadly those dreaded words ‘for service use only’ reared their ugly head. So what we have here is a fairly standard array of sockets, which includes two SCART outputs for simultaneous output to a TV and recorder – though it’s yet another Freeview box that fails to acknowledge the existence of DVD recorders and their ability to record in high-quality RGB. 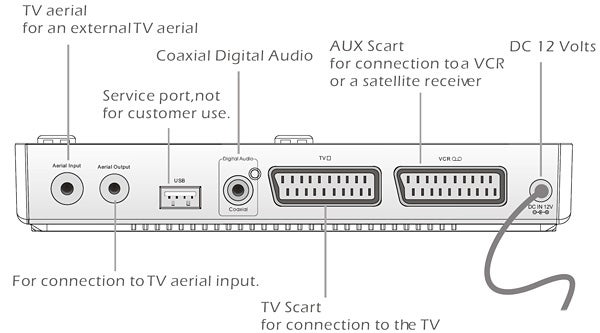 The SCART output designated for the ‘VCR’ only offers composite video, which can look really ropey when recorded. Thankfully the other SCART outputs in RGB and composite and you can always loop the RGB signal through your recorder to your TV, but it kind of defeats the object of having two SCART outputs.


Rounding up the connections is a coaxial digital audio output, providing a clean and tidy way of feeding sound to your receiver, and an aerial input and output. Because there’s no RF modulator on board, the aerial output only provides an analogue loopthrough facility and doesn’t output digital TV channels for SCART-free TVs like the TVonics MDR-250.

The Grundig delivers all of the basic features you’d expect, such as digital text, subtitles Audio Description, and channel list (which lets you rename and delete channels), favourite channels and automatic over-the-air upgrades. But there are a couple of other more interesting (if not exactly useful) features, such as the Pause function (not to be confused with pause live TV) which freezes the picture then jumps back to live TV when you exit, making us wonder what the point is. The P.Size mode is a bit more useful, toggling through the different picture display options (vertical cut, full frame and pillar box).

There’s also a 7-day EPG, which eschews the common timeline layout, instead displaying each channel individually and listing six programmes at a time. The programme synopsis is displayed in the corner, and scrolls automatically so you can read it all. This unusual design works fine, and it’s easy to change to different channels or jump forward 24 hours, but showing one channel at a time isn’t ideal – we prefer being able to see a few channels at a time as you can with other Freeview EPGs. 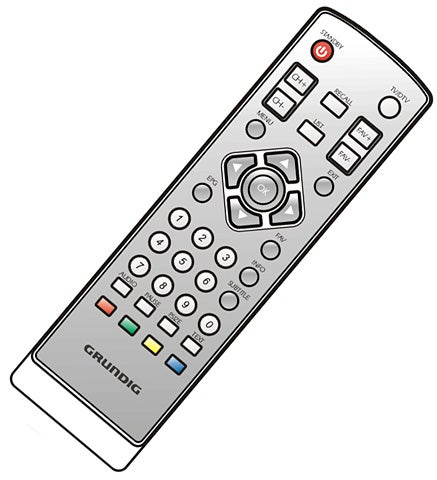 Naturally the unit is easy to install, and digital newbies will appreciate the initial setup screen, which guides you through the aspect ratio settings and tunes the channels automatically – a process that doesn’t take very long to complete, but it did take three attempts to find all of the channels. Once that’s done, you can delve into the tidy setup menu and make all the relevant changes (such as video output and aspect ratio) with minimal fuss, thanks to the responsive on-board software. Also pleasing is the speed at which the unit calls up digital text and changes from one channel to another.


As for the remote, it’s hardly at the cutting-edge of handset technology but does an OK job. The compact shape allows it to fit snugly into your hand but the buttons are a bit too fiddly for comfort, particularly the ones towards the bottom. On the plus side, the separate buttons to control the favourite channels list are a nice touch and the menu controls in the middle are well-placed.

The unit’s picture quality is as good as any other Freeview receiver we’ve seen in this sort of price range. Obviously it can’t compete with the growing number of Freeview-equipped recorders and PVRs with HDMI outputs, which offer an extra pinch of sharpness and colour depth, but the RGB images on offer here are solid.


There’s real warmth in the reds that dominate the captions of ”BBC News 24” and ”Sky News”, and the Grundig keeps them tightly contained within the edges. But this potent colour reproduction isn’t achieved at the expense of other more subtle areas of the picture like skin tones, which look natural at all times.

Inevitably, you’ll find block and mosquito noise in big doses on some of the lower-quality channels, and even the better quality ones from the BBC can’t escape it entirely, but on the whole the Grundig delivers perfectly watchable and consistently stable pictures.


But if for any reason you have to view the second SCART socket on your TV, we doubt you’ll be happy with the results – the composite signals make colours look watered down and edges look scruffy, and sadly these artefacts are passed on when making an external recording. However there are no complaints over the unit’s sound quality, which is clean and sharp whether you’re using your TV’s speakers or running the digital signal through your AV receiver.


Grundig has delivered a competent Freeview box that performs reasonably well in terms of operating speed and picture quality. Its stylish looks belie its low price tag (even if its build quality doesn’t) and the no-nonsense onscreen menus make it a good choice for digital TV newcomers. On a negative note, the EPG needs improving and the remote is a bit fiddly, but overall we reckon the GUDSTB2000 provides a decent way to get digital TV for a minimal outlay.