The Grundig GIEI 635880 X Induction Hob offers sleek looks and flexible cooking options; however, it's let down by its unresponsive touch controls.

The Grundig GIEI 635880 X Induction Hob is the company’s top-of-the-range 60cm induction hob. It’s pleasing to the eye and has eight flexible induction zones that can be linked together for larger pans. You get bevel-edged glass with stainless-steel trim for that pro look and a quirky “rotary” style power slider.

Unresponsive touch controls, the frankly odd semi-circular power slider and slow heat-up times let the Grundig down hard. There’s no doubt that this eye-candy hob would look great in any kitchen, but the tricky operation and so-so performance mean it promises more than it delivers. 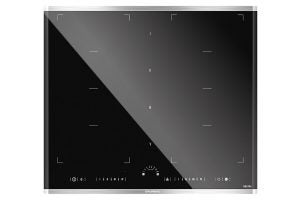 Flaunting a stainless-steel trim and bevel-edged glass, Grundig has produced a sleek, professional-looking 60cm-wide hob. The temperature control is a typical touch-slider, but is unusually semi-circular to imitate a rotary knob. Branding and markings on the glass are printed in light grey, which is easy to read and looks chic across the black Schott Ceran glass.

There are two zones with four sections, each with its own burner. Yes, that’s eight burners in total, promising to cater for a range of different-sized pans. When you place a pan on a zone it’s detected automatically, and a small line is displayed at the front of the hob. The hob hot warning has two stages, displaying a lower case “h” for a bit warm and a capital “H” for seriously hot. 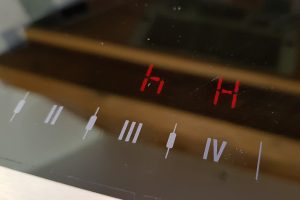 The eight burners with flexible configuration promise a wide range of cooking options, backed up with 18 levels of power control. Slightly annoyingly these are labelled 1-9, with a small dot appearing after the number to indicate the power is halfway to the next level. A display that simply went from 1 to 18 would have been a whole lot easier.

There’s a separate rapid-heating key that puts the selected burner to its maximum power for a quick heat-up, complete with three lines shown in the display.

The feature count is fairly frugal for the price, save for a timer control, child lock and overflow safety system that turns off the power if you have a boil-over near the control panel. 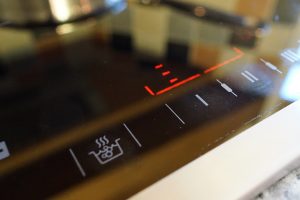 The GIEI 635880 X was annoyingly unresponsive to its touch controls, near-enough impossible to use at times. Throughout testing, we struggled with the overall snail-like response from the controls and the need to press keys several times for it to respond.

The semi-circular power control slider might have seemed like a good idea in the design office, mimicking a rotary knob. Yet sliding your finger in a tight arc is much trickier than a simple linear slide control even if it did respond well to each touch, which it didn’t. Patience is advised if you’re going to use this product with lots of pans on the go at once. 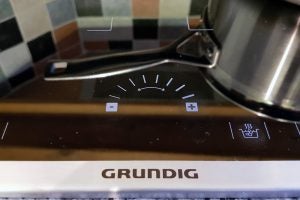 Unlike almost every other induction hob we’ve tested, the controls respond better to a slightly damp finger. It’s still mind-bogglingly frustrating to use, especially if you have a lot of pots and pans on the go and are trying to juggle several zones and different temperatures.

The controls aren’t particularly intuitive, either. Navigation on the Grundig GIEI 635880 X Induction Hob can be a bit of a mystery and there’s no easy way of shutting down a zone without whisking your finger round and round the unresponsive rotary slider control.  While this hob looks very swish, the operation is far from it.

On a positive note, there’s a handy child lock feature and a timer. Also, if there are any spillages on the surface, we found the Schott glass was, as usual, very easy to clean. 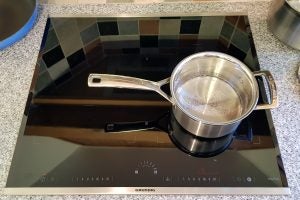 The Grundig is a 7.2kW maximum power hob, with eight individual burners. Our thermal imaging shows these are narrow, oval-shaped burners with very few cool spots when they’re all connected across a large pan or skillet. This will produce superbly even and controllable heating with larger pans that span several burners.

An oval burner isn’t necessarily ideal for round pans, but each of the Grundig’s burners managed to put a solid 1.9kW into even our smallest pan. This 17cm pan with 1-litre of water was raised to 90ºC in 4mins 13secs. That’s a great result for the small saucepan – but, unfortunately, as we increased pan size the timings lengthened quite dramatically. 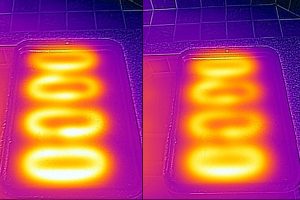 Placing our medium-sized 19cm pan over the back-left burner, the 1.5 litres of water was raised to 90ºC in a relatively slow 6 minutes as the small burner was still running at 1.9kW. Larger circular burners would be capable of putting more power into a pot of this size.

Our large-sized pan is 21cm round. That’s just about enough to span two burners, but wasn’t an efficient size for the hob. Both burners linked together managed to put only 2.2kW into the pan, meaning its 2 litres of water took a lengthy 7mins 30secs to get up to our target 90ºC temperature 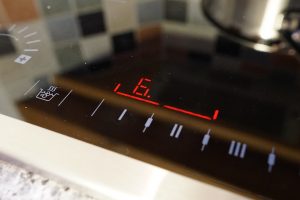 The Grundig GIEI 635880 X Induction Hob configuration is certainly flexible for different-sized pans, and particularly suitable for oval or square skillets and griddle pans. Yet, it isn’t overly efficient when heating traditional round saucepans, which is reflected in the sluggish heat-up times.

The promising rapid-heating function simply puts the temperature on the highest power level and displays three lines on the zone display, so is no quicker than the “9” setting.

On a positive note, during heating – and even with lots of cooking on the go – the Grundig GIEI 635880X remained nicely quiet. 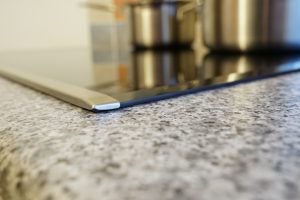 The Grundig looks great but it doesn’t have the cooking pizzazz or instant responsiveness to go with the pro styling. The eight burners with 18 levels of control are super-flexible for multiple, oddly shaped pans, but aren’t the best with traditional round saucepans, resulting in mediocre heat-up times.

The real deal breaker is the unresponsiveness of the touch controls. These required multiple presses or slides every time to get a function working, and the awkward rotary slider made it almost impossible to select a mid-power level without under or overshooting the desired level.