Add to this a Schott Ceran glass top for easy cleaning, a timer and a keep warm function, and this hob ticks all the boxes. It suffers a little power fade after the initial boost and the Flex zone is simply two circular burners. Nevertheless, boil and simmer tests were very good on all zones and the fit and finish – including that lush stainless steel trim – stand up well to its not inconsiderable £700 asking price. 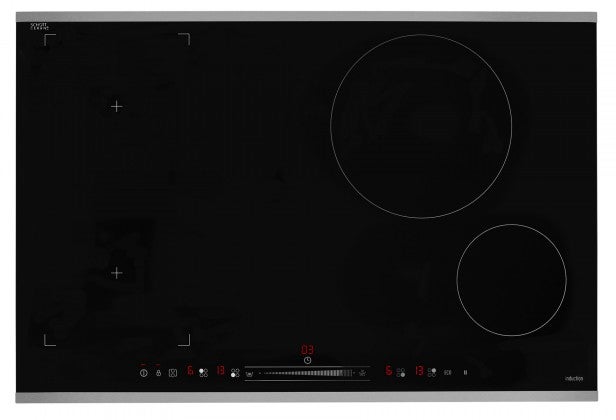 Zone markers and icons for the controls are maybe a smidgen brighter white than ideal for a super-subtle look, but they’re far from obtrusive. Illuminated displays are red, crisp and not too bright either. The whole rather stylish design is finished with a black Grundig logo on the front trim. The fit and finish is superb all round. 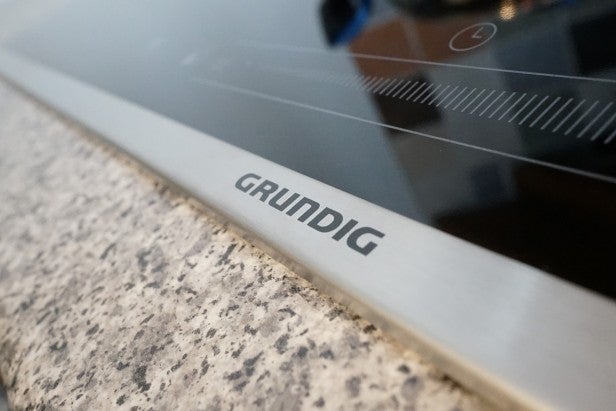 The four cooking areas comprise two obvious circular zones for round pans, which are staggered to the right of the hob, and a dual burner rectangular area. Beneath the smaller circular zone marker is a compact 145mm induction burner, ideal for milk pans or a small frying pan. The larger round zone offers a whopping 240mm burner, ideal for monster pans and casserole dishes or super-big frying pans.

To the left is Grundig’s Flex zone. This comprises two mid-size burners that can be linked together to accommodate pans long enough to span the rectangular Flex zone area. Sadly, this feature is simply two 180mm circular burners that can be linked under a single control, rather than a genuine larger, square zone. It works, but won’t produce such a particularly uniform heat across the base of large pans.

There’s a power boost features on all zones for quick heating from cold, a count-down timer with zone switch-off, and a basic keep warm function. This doesn’t have any fancy temperature measurement or controllable level, but simply pulses at low power to keep things warm. The pulse peaks at a fairly low 300W, so this is more for keeping your soup warm rather than your peas simmering.

Topping off the features list is a cleaning lock so you can give the controls a wipe mid-cooking and a child lock to keep junior Jamies at bay. 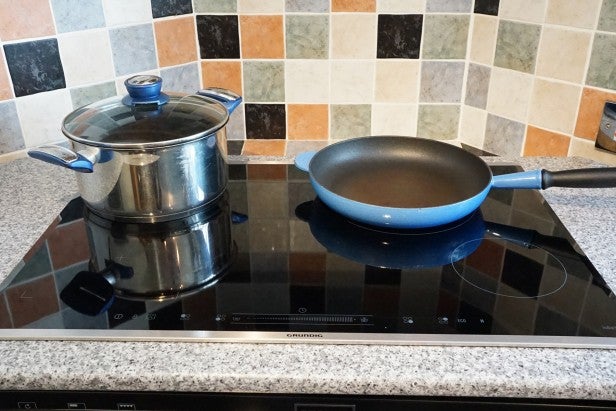 Operating by zone selection and then a single central slider isn’t our preferred modus operandi, as every action must be preceded by making a zone selection. This is true even if you’re using only one zone; you still have to re-select that zone before you can change temperature or engage any of the features. Still, not having a slider for every zone does keep the controls looking clean and compact.

The slider itself responds well to touch, even with damp digits, and it’s nicely wide. That makes it easy to pinpoint one of the 19 levels of control, indicated in red on the relevant zone. The boost feature is engaged by selecting the zone and then immediately pressing the little boiling icon at the end of the power control slider. 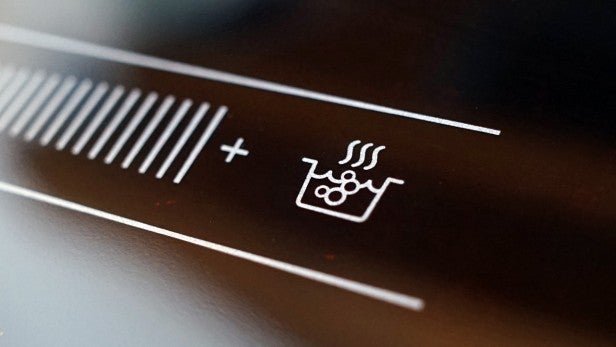 The same button also provides the option to use power boost during cooking for a set period of time. This ranges from as little as 10 seconds if you’re on either the highest (19) or lowest (1) setting, to 85 seconds if you were cooking on mid-level power (10). We’re not convinced many people will bother with such a variable feast of a feature, but it’s there if you can think of a use for it.

A ‘pause’ button to the far right shuts off all zones simultaneously, rekindling them at their previous level when pressed again. Door bells, phone calls and a quick nip to the other room to catch up on Love Island are all catered for with this feature.

Rather more contentiously this Grundig has an Eco mode. No bad thing generally, but it seems nobody at Grundig thought this one through. The mode simply halves the power to all zones. That will double the time it takes to cook or heat your food, resulting in exactly the same total power use. How is this in anyway ‘eco’? Answers on a postcard… 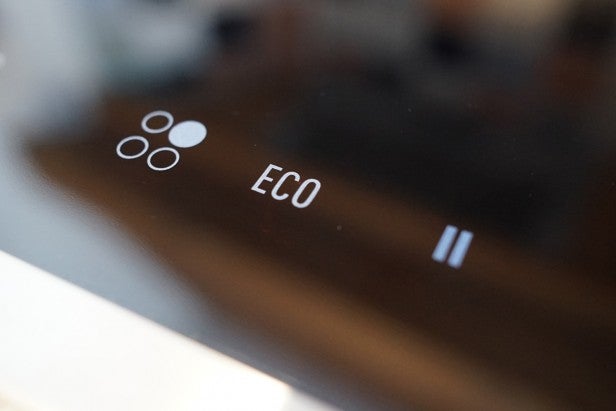 Even with a couple of zones on full boost, the Grundig’s cooling fans remain fairly hushed and control beeps aren’t intrusive – which is a good thing considering there’s no way of minimising them or turning them off altogether.

The Ceran glass by Schott is its usual robust self, being resistant to scratches and allowing even some seriously burnt-on debris to be scraped clean with ease. It does show up finger marks, though, and we did find a little extra cleaning care was required where the raised stainless steel trim catches small crumbs. 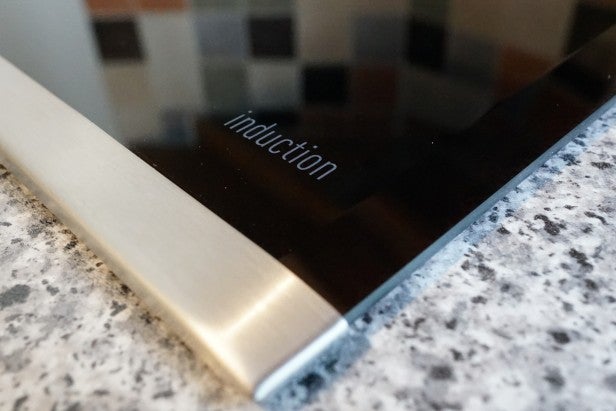 This Grundig’s induction burners promise serious power on boost mode and this is reflected in very good heating times across all pan sizes. As ever, matching pan size to burner size will deliver best results, but you don’t loose a great deal of efficiency if you put a smaller pan on a larger zone.

Placing our 17cm milk pan on the smallest zone and using boost mode resulted in 1-litre of room temperature water hitting 90oC in just 4mins 20secs. Interestingly – well, for techy geeks anyway – the power initially hits 1600W in this zone on boost but slips back down to just over 1400W after about 20 seconds and holds steady. That’s a quite a large fade percentage. The heating is still no slouch, but if the hob held 1600W in this zone for the entire test, the time would be sub-four minutes. 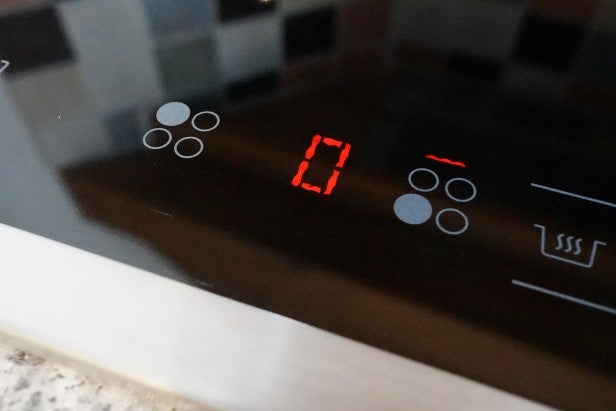 The same level of 10%-15% power fade happens on the large circular and Flex zone burners as well, although the Grundig’s heating results across the hob remain very good. Our largest 21cm pan looked quite small on the monster 24cm burner and its 2 litres of water were raised to 90oC in a nippy 4mins 50secs on boost mode. Our mid-sized pan on the front of the Flex zone was quickest overall, getting to 90oC in just 4mins 15secs.

No surprise, then, that linking both front and rear burners of the Flex zone creates a large and very potent cooking zone for big pans and skillets. As the thermal imaging shows, this area is simply two round burners with a linked control function. This isn’t ideal for evenly heating the base of big pans, so results will be best with heavier, high-quality cookware that will better disperse the heat.

The Grundig’s 19 levels of power control proved particularly useful for getting delicate items simmering gently with more precise heat control than typical 10-level hobs. We can also see this level of control being handy for complex dishes that require gentle heat and fine control.

We were wowed by the fit and finish of Grundig’s GIEI824470H from the outset and its luxury design looks a million dollars in situ. Well, more than its £700 asking price anyway.

While the power fade on boost and basic round burners in the Flex zone are a compromise, this hob’s heating speeds and precise simmering control can’t be faulted. The basic keep warm function works well and the global pause button will find its fans too – especially when the phone rings mid cooking. Getting all this for under £700 makes this Grundig induction hob look pretty good value against some competition in the premium 80cm wide hob market too.