Available on PC, PS4, PS Vita (PC and PS4 versions reviewed)
While some HD remasters are wholescale remakes, Grim Fandango Remastered is more a sympathetic restoration, gently upscaling the game’s late nineties 3D visuals for a 1080p full HD presentation and adding an entertaining commentary track, but leaving the art and the gameplay virtually untouched. For better or worse, this is the same Grim Fandango we played in 1998, only with the lines a little cleaner and those skeletal faces sharper than you might remember. Luckily, both art and gameplay hold up pretty well.

At the time, Grim Fandango was seen as a bold, experimental game for LucasArts. While other genres had moved to 3D graphics engines, the point-and-click graphic adventure remained stuck in 2D. Grim Fandango saw Tim Schaffer and his team trying to push the genre in a new direction, with a lead character who moved in three dimensions through each scene, his gaze reacting to interactive elements and objects, and new movement, interaction and inventory systems that swapped point-and-click for more visual, intuitive controls. The results weren’t entirely successful – there’s a reason why the genre has returned to point-and-click – but they were exciting. At the time, Grim Fandango seemed like the shape of graphic adventure games to come. 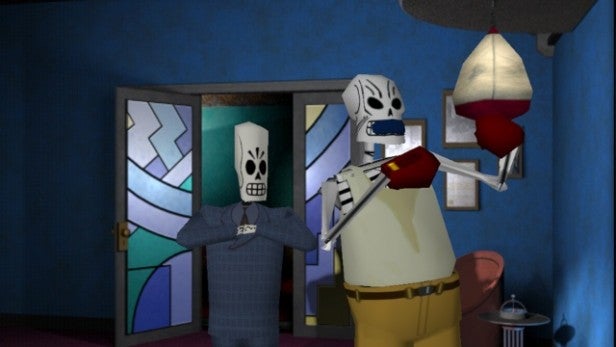 It was equally bold in its artistic choices, taking inspiration from a idiosyncratic blend of film noir, the jazz age and the Mexican Day of the Dead. Its hero, Manny Calvera, is a failing salesman peddling second, third and fourth-grade travel packages to newly arrived souls in the land of the dead. It’s a story that crams in mystery, suspense, murderous conspiracies, dodgy beatnik poetry and even some romance, yet without losing LucasArts’ trademark humour; the dialogue is laugh-out loud funny, even now. The art, meanwhile, which combines film noir and art deco with the vibrant colours and stylised skeletal motifs of Mexican beliefs, hasn’t withered with time. While Grim Fandango shows its age in its technical limitations, its artistry remains timeless and beautiful.

The gameplay? Well, that’s where both parts of ‘for better and worse’ come in. On the ‘better’ side, it’s a product of LucasArt’s golden period, where the studio was at its most inventive and inspired. The situations and the puzzles are often brilliant, with one solution forming part of a wider puzzle, which might be part of something larger still. On the ‘worse’ side, some of the puzzles are ludicrously finicky, dependent on exact positioning or split-second timing, or almost impossible to work out. Some, like the infamous Forsaken Forest/ flaming beavers section, are just plain irritating, and will have you rushing to an FAQ even if you think you remember the solution from first time around. There’s also an awful lot of wandering aimlessly, collecting items and backtracking, which is fine in the limited confines of Manny’s office building, but a real pain when the action opens out in the city of Rubacava. 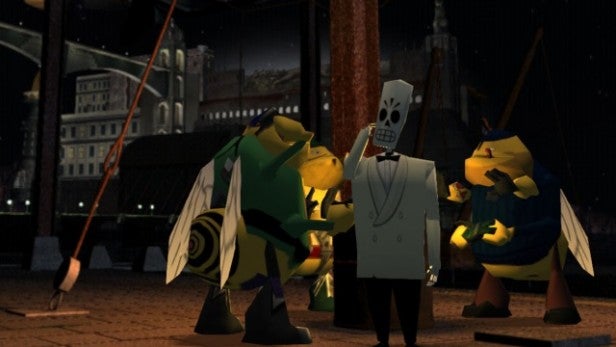 Grim Fandango can be frustrating and it can test your patience, which leaves you wondering why Double Fine Productions didn’t implement a hint system or a fast travel option for the Remastered version. Yet it still wins you over, almost effortlessly. It’s not just the story – beautifully plotted, warm and engaging – or the characters, who can be sympathetic, sinister, weird or lovably dumb, but never less than memorable and well-written. In lesser hands your driver, Glottis, would have been another dumb sidekick, played only for laughs, but in the hands of Schaffer and co. he’s a lovable lump with enthusiasm and heart. Manny, meanwhile, is one of Lucasart’s great noble losers; a trying-to-be-hard-boiled hero that you can’t help but root for.

The writing and art direction does an awful lot of lifting, but the voicework is exemplary and the music superb. Grim Fandango hooks you and keeps you for two of the best reasons around: because you have to know what happens next, and because what happens next keeps making you laugh. 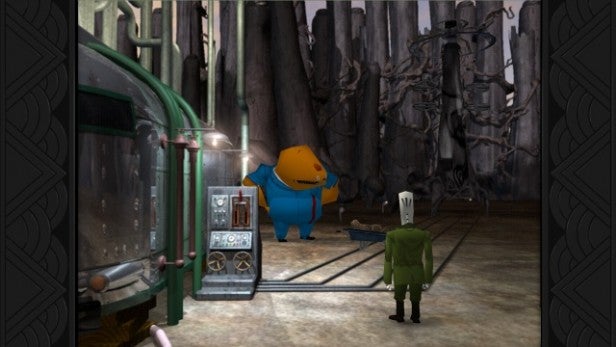 As the backgrounds were originally rendered in a 4:3 aspect ratio, the new PC and console versions use sidebars left and right to maintain the look, though you can choose to have a zoomed-in, widescreen view if you prefer. The lighting has been enhanced, to superb effect in certain scenes, but genuine enhancements are few and far between.

It’s a different story with the controls. The PC version now offers traditional point-and-click controls, where you left-click to move and right-click on an object or character to interact. You’ll spend a fair bit of time flipping between the scene and the inventory screen, where you can rifle through the objects in Manny’s coat before selecting one to use. The console version plays slightly closer to the original, though the tank-like movement has been replaced with full analogue controls, and the game sometimes switches automatically to the right object in your inventory, so that you don’t need to select your scythe before slicing open a dead soul’s body bag. 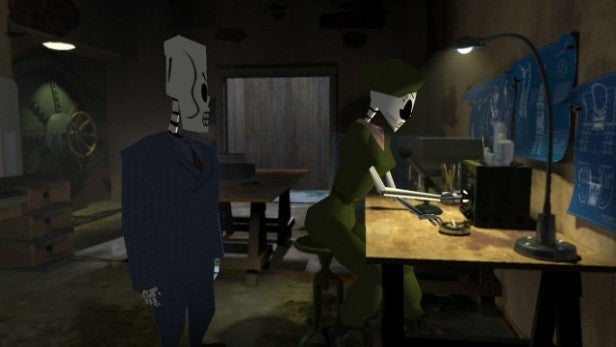 Those of us who have played and loved Grim Fandango before won’t need a reason to replay it some sixteen-odd years on, but Double Fine has given us one anyway through the addition of a commentary track. It only kicks in at specific points when you click on an icon, but through it you’ll discover details about what inspired the team, the technical challenges they faced, the bits they’re not so proud of and the bits that still make them laugh. Normally I’m not a big one for these things, but this one’s an exception. Perhaps it’s because it suits the laid-back style of Grim Fandango. Perhaps it’s because the team view the game with the same affection that we still do today.

Verdict
Some might wish for more visual enhancements or fixes for the original game’s biggest flaws, but this HD restoration of Grim Fandango only underlines what a fantastic, beautifully written and gorgeously designed game it is. It’s clearly a product of its time, yet like its movie inspirations it hasn’t faded with time. It was one of the best graphic adventure games then, and it’s still one of the finest now.