Available on Xbox 360, PS3, PC (version tested)
More than anything, GRID Autosport is Codemasters setting the clock back; back to the dawn of the HD console era, when TOCA Race Driver and Colin McRae Rally were its key franchises, and before the obsession with X games, Travis Pastrana and cracking the American market took its hold.

While an extension of GRID2, it’s closer in spirit to 2008’s Race Driver: GRID and 2006’s TOCA Race Driver 3. Sure, it has street racing, drift racing and other elements familiar from GRID2, but there’s a renewed focus on touring cars, open-wheel racing and endurance events. Like all of Codemasters’ best games, it feels like it was made for racing fans by racing fans.

There’s less unnecessary flash about GRID Autosport. Out go slick, animated menus, dude-speak voiceovers and video intros. In comes a simple grid of events, allowing you to choose one championship from one discipline each season, building XP and levelling up in order to unlock the locked GRID discipline and drive faster cars in new events. There’s no hiring staff, buying cars or checking emails. Pick a discipline, a championship and a team – which defines your car or cars – and you’re away. 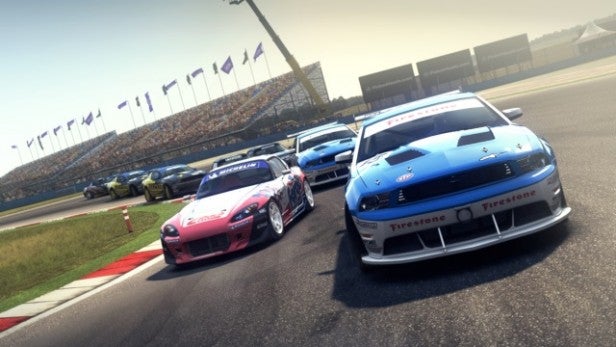 Two of the disciplines – Tuner and Street – connect straight to the GRID2, with the former packing drift events and time trials, while the latter takes you straight to high-speed races through the avenues and boulevards of Paris, Barcelona, Dubai, Washington and more. The Touring Car racing takes us right back to the days of TOCA, while the Open Wheel discipline leverages Codemaster’s experience with the official F1 games. Endurance, meanwhile, is exactly what you’d expect, though with races topping out at eight minutes we’re hardly talking Le Mans.

The good thing about this structure is that you can spend the early part of the game focusing on the stuff you like best. Love touring cars but not all that silly drift-racing nonsense? Well, you can keep doing the former and leave the latter until you want to unlock the GRID events. It’s all slightly lacking in personality, without the car collection vibe of a Forza or Gran Turismo, but it puts the emphasis on the racing, which is arguably where it belongs. 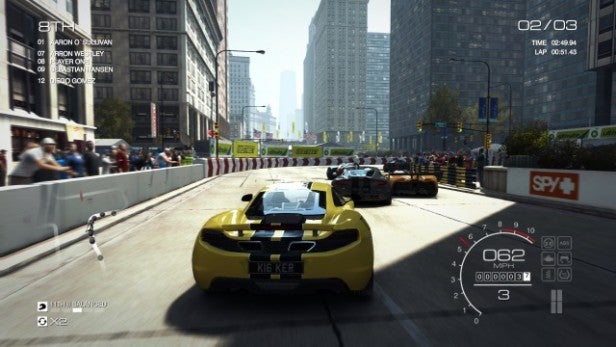 And when you do race, it’s mostly great. The handling now feels tighter and more authentic than the peculiar arcade/sim hybrid style of GRID2, and if you play without the driving aids switched on you’ll find it demanding but not overly punishing. It doesn’t have the grit of Gran Turismo 6 or the dynamic feel of Forza 5, but it’s really not very far behind. Damage also plays a genuine part, not just crumpling the bodywork, but affecting – even wrecking – the way your car drives. That’s a big plus point over both Microsoft and Sony’s games.

The AI, meanwhile, is surprisingly effective, driving fast, pushing you on the corners, and capitalising on every error or loss of nerve. GRID Autosport isn’t afraid to push you out of your comfort zone, or reward old-fashioned efforts to master cars and learn the tracks. You can spend whole races jostling for a mid-pack position, and it still feels like a triumph when you finish fourth. You’re not here to drive. You’re here to race. 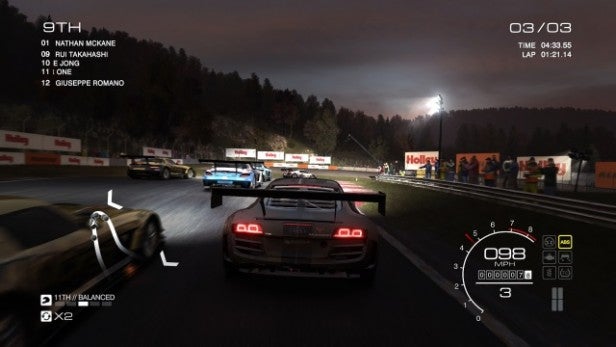 Sometimes it goes overboard on this. Qualification is an optional but practically essential part of some disciplines and races, but not available on others, which can leave you starting a race in last place and finding it impossible to weave your way through the pack. The AI can play incredibly dirty, smashing into you on the side on a corner and spinning you out, shunting you from behind or swerving right in front of you as you try to pass.

This can be infuriating in some key events, causing full-on smack the wheel/throw the controller/curse the AI programmer and all their family strops on multiple occasions. Either Bowser has left Mario Kart and started moonlighting as a street racer, or Codemasters felt that Vodka and red-bull swigging seventeen-year-old banger racer was the way to go. 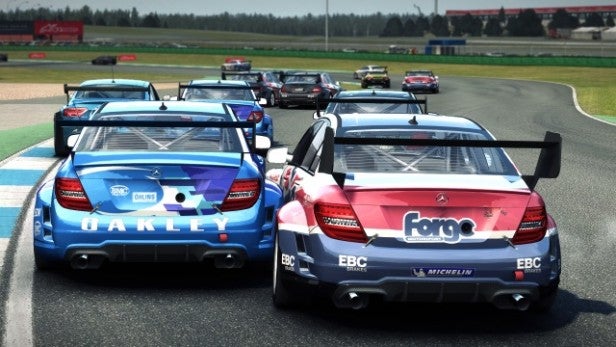 Luckily, there is a solution. As in previous GRIDs you have a flashback feature, where you can rewind up to the last thirty seconds and retake the corner where your car was smashed off track. Theoretically, you’re meant to use flashback to fix your own errors, and with only a limited number (depending on difficulty level) you need to use them wisely. We’d advise holding at least one back, at any rate, for that point where Vodka-fuelled, banger-racing Bowser does his best to T-bone you on the last corner, knocking you back from third to tenth.

Not all of GRID Autosport works. If you couldn’t see the point of drift events in previous racers, then GRID Autosport won’t change your mind, and you will eventually have to spend a few hours tackling them. Some of the street races feel like a sequence of random events that see you finish either in first place or in twelth, depending on which accidents occur as you’re driving around – Bad Boy Bowser’s just as happy to smash into other AI drivers as he is to wham right into you. 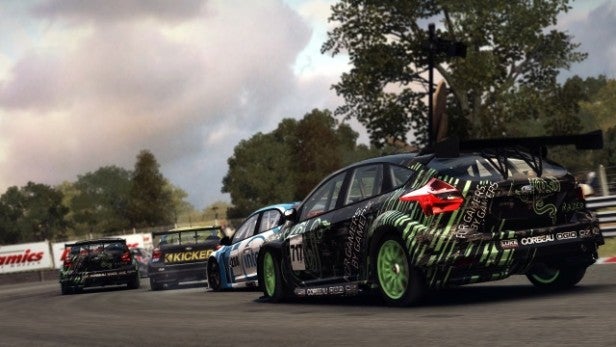 There’s no real let up from him in the Endurance events, either, where self-preservation would make a lot more sense. And while you have an AI team-mate you can push to drive more or less aggressively, it doesn’t actually make much difference to the results. What’s more, your team-mate’s failures can be annoying when your team results affect your team objectives and your overall post-season experience point haul.

Yet when GRID Autosports is good, it’s really, really good, putting together combinations of cars, tracks and racers that will push you to your limit, and make you fight for every place. You’ll love racing tiny Mini Miglias. You’ll love racing Ozzie Utes through Bathurst’s sweeping downward curves. You’ll love blasting hot hatches through Barcelona’s squares and portside roads, or around the Eiffel Tower or Capitol Hill. 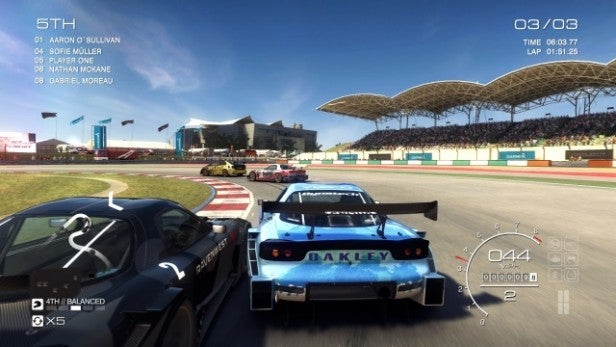 Visually, too, it’s a treat. Play it on a half-decent gaming PC, whack the settings up to Ultra and the resolution to 1080p, and you’ll see a game that can hold its own with Forza 5, perhaps falling behind on the gorgeous lighting and vehicle detail, but making up for it with a host of little touches that bring the different environments to life.

Perhaps the biggest disappointment is the cockpit camera. Unlike its controversial predecessor, GRID Autosport has one, but it’s a bit of a half-hearted effort. The dashboards are generic and deliberately blurred out of focus to cover this up. Codemasters clearly doesn’t have the budget for this kind of thing that Sony and Microsoft enjoy, but it’s still mildly embarrassing to see it done so obviously on the cheap. 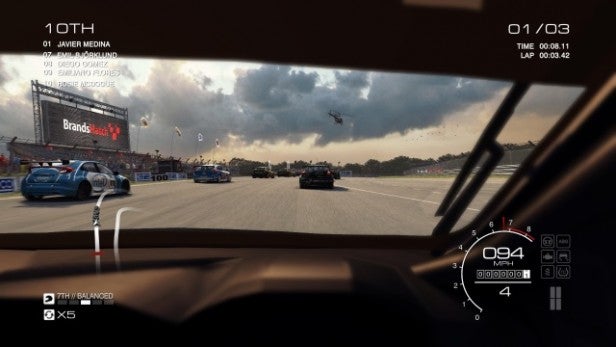 GRID Autosports is a slightly odd game, looking backwards to past glories and not even trying to compete with the latest crop of racers on features. It has fewer cars and tracks than a GT or Forza, no dynamic weather or dynamic track layouts, and no seamless single-player/multiplayer stuff. Its online options are perfectly functional, but could have come from any racer in the last five years. Yet when it comes to actual racing, it’s often more satisfying than Forza 5 or GT6, or indeed any serious racer since the underappreciated Shift 2: Unleashed. It’s not the most polished, feature-rich racer, but at least it leaves you feeling that GRID might be getting back on track.

Verdict
There’s much to celebrate in GRID: Autosports, not least a shift away from extreme sports nonsense and towards real motorsports. The handling is great and so is the racing, bar some mindlessly aggressive AI. This isn’t a car game to beat GT or Forza, but it puts GRID back in contention, and also puts in solid groundwork for where the series might go next.