Available on Xbox 360, PS3, PC (Xbox 360 and PS3 versions tested)
Race Driver: GRID was one of the two great under-appreciated racers of this console generation, the other being EA and Slightly Mad Studio’s Shift 2: Unleashed. Both games were built in the UK, sat in a sweet spot between proper racing sims and arcade racers and had a similar approach to racing; one that pushes the player to take risks and drive gutsy rather than hang back, race tactically and let your upgrades do the talking. To some extent, GRID 2 is the next step on in the same line, but where we’d hoped for a masterpiece, we’re left with a flawed gem. GRID 2 sparkles like a diamond once you’ve spent some real time on it, but for the first few hours all you’ll see will be the flaws. 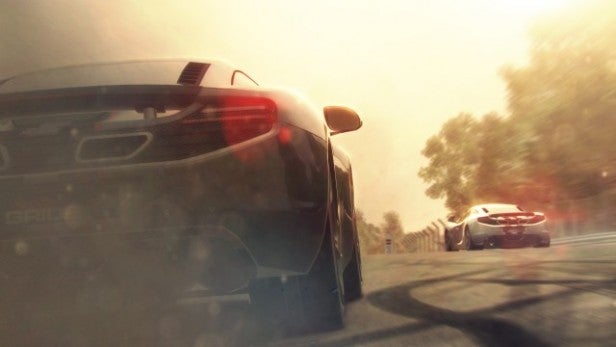 We’ll push past some of the more subjective grievances. Casual racers will lament that GRID 2 doesn’t offer any driving aids, and that the muscle cars that dominate the early stages aren’t exactly the easiest to drive without them. Serious racers will note the lack of any cockpit view, leaving you with just a low-slung bonnet-cam and bumper-cam. Everyone British will note that the series has adopted the US-focused tone that’s characterised recent entries in the DIRT series, with American voices for everything, early stages consisting entirely of US tracks and a tie-in with ESPN. Meanwhile, fans of European motorsports will note that the old real-world Motorsports focus of the original TOCA Race Driver series has shifted entirely to the kind of events you’d see in a Burnout or Need for Speed.

All of these complainants would be right, but let’s take GRID 2 on its own merits. The premise is that you’re a hot young racer on the US urban racing scene, who gets recruited by a rich motorsports tycoon who wants to get the world racing together in a new global motorsports league. Don’t worry: bar comments after each race and post-season analysis on ESPN, there’s no real storyline to follow. It’s all really a transparent justification for a developing structure of events, starting off with point-to-point and circuit races in Chicago, Miami and along the Californian coast, and growing to take in elimination events, drift events, time trials, endurance races and more across America, Europe and Asia. 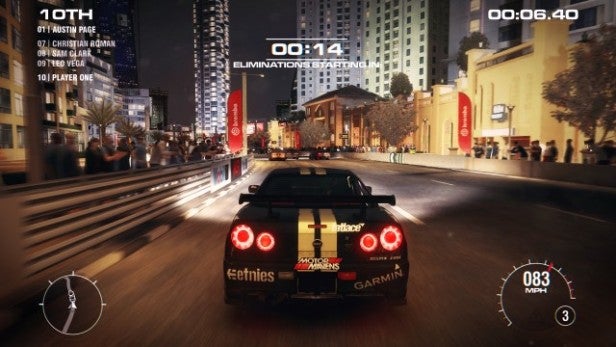 GRID 2 is almost as notable for what it doesn’t have as what it does. There is no car upgrading, and you can’t even buy cars. Instead you earn fans through your racing, these unlock more events, and your gracious employer rewards you with a choice of new vehicles. One of these you can pick immediately, while the other can be won later on through vehicle challenges. GRID 2 is all about what happens on the track, not off it. It’s about wringing ever last drop of performance from the car you have, not transforming it into a surefire winner.

GRID 2: Getting off to a poor start

The problem is that, for the first couple of hours, GRID 2 just doesn’t seem to be much fun. You’re very limited in terms of tracks to race on, the cars all suffer from fiendishly skittish handling, and – at normal difficulty mode – your CPU-controlled rivals are so mindlessly aggressive that you’ll struggle to make much headway. You’ll be glad that GRID’s signature ‘flashback’ rewind feature has returned, because you’ll be using it as much to avoid the goon who keeps rear-ending you as you will to erase your own mistakes. 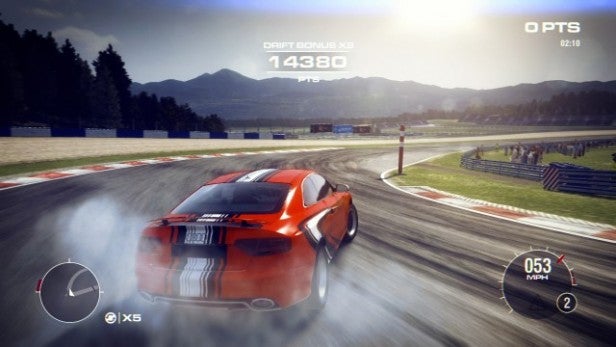 We’re also getting used to arcade racers that treat you to a smorgasbord. Here’s a whopping huge area in which to race, here’s a vast selection of desirable motors, here’s a wealth of interesting events, now just enjoy. In its early stages – and sometimes later on – GRID 2 feels like its holding back on all the good stuff. For the first few hours it’s less the next GRID and more the next GRIND.

Yet it’s worth persisting. Finish off the first few events, open up the first World Racing Series season, and you’re on your way. Make it to Europe, and things really start to build, with new and more varied events in Paris, Barcelona and the Code d’Azur. More enjoyable and satisfying to drive cars arrive, and before you know it you’re having fun. GRID 2 still has periods where you’ll feel like you’re grinding away at the same old tracks in the same old cars, but once you’re past that first hump it feels more like a true successor to the original GRID. Make it to the terrifying downhill courses of Japan and it’s a hugely entertaining ride.

Next
GRID 2: The Verdict Review