Until Cookie Clicker sent browsers into a frenzy a couple of years ago, the chances are you’ll have never heard of an ‘incremental game’. The concept is a straightforward one: A simple action, in this case clicking a cookie, generates more cookies that you can then spend on generating those same cookies at an even faster rate.

It seems like an especially bizarre and pointless premise for a game when written down in black and white, unlikely to attract anyone but the most manic of Maryland’s fanboys. Nevertheless, Cookie Clicker and the run of incremental games that had preceded it managed to garner quite an audience in 2013, with the model itself requiring very little explanation once people actually sat down and started playing it. The old ‘Skinner Box’ technique of rewarding players for carrying out a simple action proved to be as addictive as ever.

A couple of years on, Cookie Clicker’s legacy is that much of the work
Green the Planet might have had to do to detail the model has been done
for it; Though when compared to the leagues of other games on the App
Store, PUMO’s environmental adventure sits rather oddly, but in the
world created by Cookie Cutter, the premise is positively child’s play. 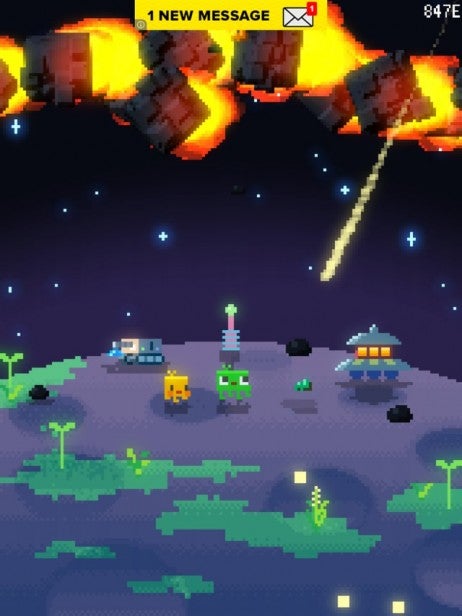 It’s the setting and delivery of the game, rather than the now well established model behind it, that really affords Green the Planet some charm, however. Your job is to help a barren planet rediscover its greenery, using the assortment of meteors flying above its surface to populate the land with plants aplenty. Everything that falls to the planet’s surface – whether shot down by your own missiles or laser gun – is converted into energy that automatically begins to transform the planet’s rocky surface into greenery, or can be traded in to upgrade your assortment of machinery.

It’s this machinery that serves as your only influence over what is an especially automated process. At your disposal is a weapon in which to shoot down the meteors passing over head, a satellite with which to spot them, and an auto collector that picks up debris during your absence. The more powerful your satellite, the more meteors you see, the more heavy your weaponry, the bigger boulders you’re able to shoot down for energy. It’s the same trick Cookie Clicker pulls from beginning to end, with the numbers you’re able to amass going up and up while the amounts you need to unlock upgrades similarly heading skywards.

Your only inputs are tapping your weapon to fire either your laser or your missiles (depending on what you have equipped at the time) at the targets above or gathering up the energy spewed across the land like a series of twinkling stars, plucked from space. Other than that, it’s a waiting game; waiting and tapping, tapping and waiting, waiting and tapping and upgrading. When you manage to amass 100 million energy points, you’re able to upgrade your weaponry to carry on the fight even when you’re not playing – said tally serving as a long term goal from the start – but that’s pretty much all play has to offer. 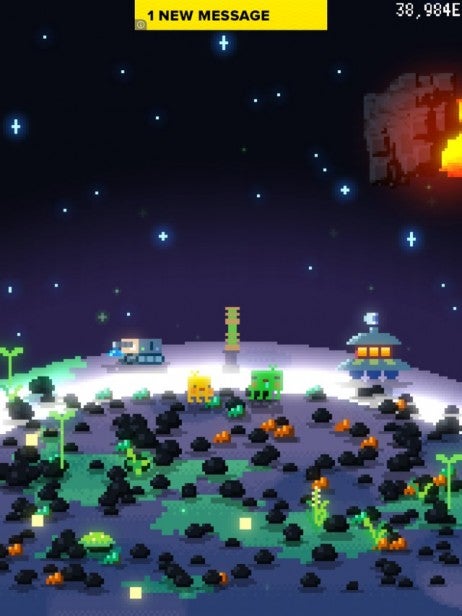 What makes Green the Planet in any way alluring is the environment this all takes place in. The pixel art graphics, though hardly original these days, are nevertheless delivered in an endearing fashion and the thrill that comes from shooting down meteors with a giant space cannon simply never gets old. The whole thing packaged together, is – for want of a better word – utterly ‘cute’, but it’s hard to bestow much more praise on Green the Planet than that.

There’s not much on offer here that’s all too deep, and the especially cruel amongst its audience would be warranted in dubbing it as superficial: this is little more than a fairly standard incremental game wrapped in some bespoke clothing, and if watching numbers reach ever greater heights is your bag, Green the Planet is a welcome home. In terms of taking the genre to a new galaxy, however? Green the Planet doesn’t even fire up the thrusters.

Verdict
Pretty pixel art and a fresh setting can’t hide the fact that this is a standard, albeit well made, incremental game where the level of your input is severely limited and the draw of watching numbers race ever higher is neither new nor especially engaging.