A lot of developers like to argue that their multiplayer component qualifies as a separate game, but GTA Online is one of the few to justify the claim. Rolled out through a patch two weeks after the launch of GTA 5, it’s a different entity, taking the streets and people of Los Santos, not to mention those of the surrounding Blaine County, and rolling them into a experience that sits somewhere between a conventional multiplayer mode and a fully-fledged MMO.

Like an MMO, GTA Online has a persistent world, character creation and development, housing to buy, social structures and clothes, cars and weapons to collect. Unlike an MMO it has a very limited number of players online in the same space as once, and much of the activity is focused on the kind of stuff you’d find in a straight multiplayer mode, with co-op, team deathmatch and racing activities very much to the fore. The more you play, the more you realise that this approach is both a strength and a weakness.

Let’s get the launch out of the way. We’ve seen some disasters in our time, but GTA Online’s launch ranks amongst the worst. Playing on PS3, we had a 24-hour wait between installing the patch and actually completing the first mission, and couldn’t even get into a game for much of that time. To make things worse we had to go through character creation and the intro cinematic several times before the servers saved our data, and we’ve still experienced numerous freezes, crashes and drop-outs in the days since. We know that Rockstar faced an unprecedented challenge, and that the servers were bound to be flooded, but – really – there’s no excuse for a cock-up on this scale.

Each patch has made the game slightly better, but even with the game up and running, it’s not always a smooth experience. There are long delays between finishing one activity and getting back into the main free-roaming map, and sometimes simply getting a group together to start a co-op mission takes so long that you feel like dropping out – and frequently your new-found buddies will. An MMO released in this state would probably never recover. GTA Online’s advantage is that it’s not an MMO – it’s tied in to a game that many of us have bought already – and that you’re not paying any kind of subscription for the pleasure. 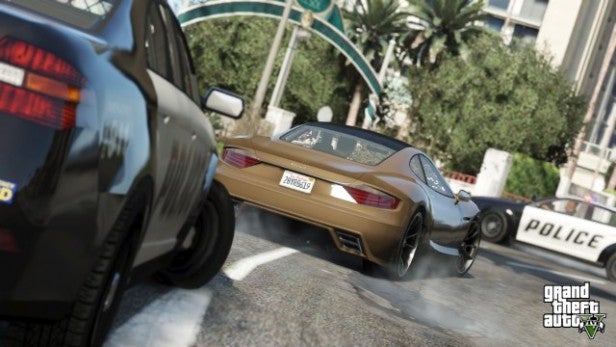 Rockstar has gone for an interesting take on character creation. Rather than tailoring your character using the kind of tools you’d find in an MMO or sports sim, you choose their four grandparents and then alter how much influence each has over their overall appearance. Being GTA there are no RPG-like stats, either. You can set how much time your character spends in certain activities, and this will affect their size, their weight and their initial clothing. The only things you can control directly are their hairstyles, beards and glasses. It’s an unusual system, and we’re not 100% sure it works. It’s hard to get the kind of look you’re really going for, and we found the grandparent portraits hard to see clearly on a 37-inch TV screen.

Once you have a character, you see them fly into Los Santos and the adventure (fingers crossed, hum nervously) begins. There are a handful of tutorial missions, then you’re set loose on the big city, causing mayhem on an ad-hoc basis, taking missions from a handful of familiar faces, and joining your fellow players in multiplayer ‘jobs’.

For the moment, the jobs are the mainstay of the game. You’ll find team deathmatches with respawning, more challenging no-respawn variants, and a wide range of races covering cars, bikes, motorbikes, boats and jetskis. There are co-op missions where you all work together to repossess cars, steal drugs or hijack a mobile meth lab, and team missions where two teams compete for the objective.

In the background of all this, you also need to be earning cash, stealing cars and purchasing new weapons and add-ons. Weapons and custom options only become available as you level up through the game’s reputation system, and the more you play the more you’ll find that being stuck with the starter pistol early on in a multiplayer event is a serious disadvantage. 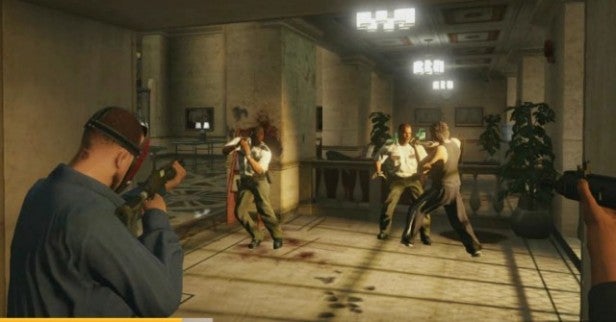 This basic structure seems pretty sound, but currently GTA Online suffers from two big problems. The first is that, with only sixteen players in your world at any time there are only so many to get involved in any activity. This doesn’t matter when it’s a race, which are good fun even with two or three, but it’s a disaster for the deathmatch jobs that fall flat when there are four to six guys running around a sprawling map. You can spend what seems like an age waiting while a no respawn game sets up, then another age wandering aimlessly towards a signature on the radar, only to go down with a pop in seconds. This isn’t what most of us call fun.

The second is that, while there is an awful lot of content here, it’s not always easily discoverable. A lot of the really good stuff is locked off until you reach a certain level, and while the game has several different mechanisms – the map, quick GPS functions, smartphone prompts – to get you quickly into an activity, it’s still oddly difficult to find something to do and other people to do it with.

As the game moves on, crews (established teams) will sort this out, and it’s a much more enjoyable experience if you can play it with real-world friends, but be aware if you’re logging on on your own. You can often find a bunch of people to play with and move from job to job using a very handy voting screen, but even this will often lead to a grind of deathmatch after deathmatch, and trust us when we say that endless deathmatch is not GTA’s biggest strength. It’s no Call of Duty or Battlefield 3.

Weirdly, GTA Online doesn’t seem as strong visually as the main game,
either. While the external locations are the same, some of the areas
where you do jobs seems weirdly lacking in interest or texture, and the
characters you build aren’t modelled or rendered with the same
personality or attention to detail as Michael, Trevor and the rest.
That’s only natural given how they’re generated, but it still makes for
an odd shift when you go back and forth between single-player and
multiplayer, as the game invites you to do. 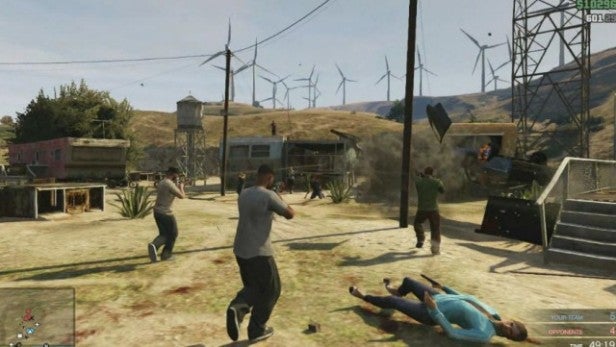 So far, then, GTA Online might not sound like too much fun, so why persist? Because when it does click into place, it’s absolutely fantastic. Everything from holding up a licquor store to racing mountain bikes downhill from the Vinewood sign is a lot more exciting with more players, and there’s a sense that chaos is always lurking just around the corner. It’s the kind of game where stories naturally evolve.

For example, your humble correspondent got invited to a motorbike street race. On the second corner one racer hit something explosive and the whole group went up in flames. Some of us respawned on new motorbikes, others stole the next available vehicle. I grabbed a car, raced through the flames and knocked one competitor off his bike and ran another one over in the process. This kind of thing doesn’t happen in Gran Turismo.

Before long, we’ll all have similar stories. In fact, we’ll have better ones about the jobs that have gone wrong; about the time we went parachuting; about the time the enemy team stole the drugs but we blocked their exit with a truck, threw a grenade and blew the whole crew to kingdom come. This is what GTA Online should and could be about. It’s just a shame that there’s all this other stuff to get past first.

With a few more patches, more players and a handful of tweaks, GTA Online has the potential to be great. Unfortunately what we have right now is only sporadically brilliant. It’s too hard to get to the best content and too hard to get enough players involved, and it’s only when chaos breaks out in the middle of a race or mission that the authentic GTA experience pushes through. Even in the few days we’ve been playing we’ve seen significant improvements, but GTA Online still has a way to go before it matches the genius of the single-player game.