What are the Grado SR60e?

In a world where almost every traditional maker of headphones has prostrated itself at the altar of Dr. Dre, the Grado SR60e are something very unusual. While Denon and Sennheiser now fill their line-ups with headphones designed for the street, headphones designed to look good on shelves, Grado has continued along a path it knows well.

The Grado SR60e are relentlessly uncompromising headphones that frequently fall right into downright inconvenience territory. However, they get you hands-down the best sound you can get for £79. 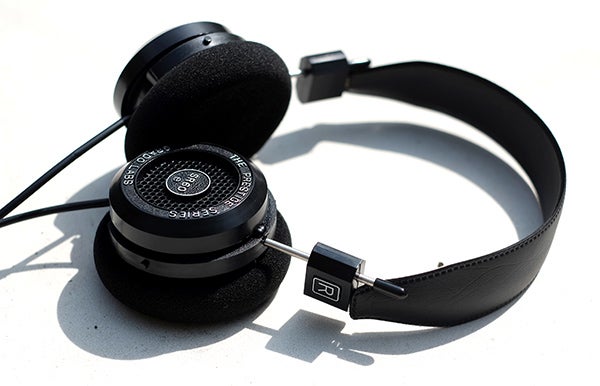 Style matters in headphones. Looks are a big part of them these days, and portability means a lot to people wanting to wear a pair to and from work. The Grado SR60e have a very distinctive look, but it’s more ‘1940s fighter pilot’ than that of the young person swaggering down the street – a look most headphones seem to adopt these days.

Size-wise, the Grado SR60e appear quite similar to headphones like Beats Solo 2. They’re on-ear, so not huge. However, these are not portable in the traditional sense.

While the Grado SR60e don’t need a headphone amplifier, and so aren’t tethered to other equipment bar your phone/MP3 player, they are open-backed. All that separates the insides of these headphones from the outside world is a wide-spaced speaker grille on the back of each ear cup. Look through it and you can actually see the driver working. 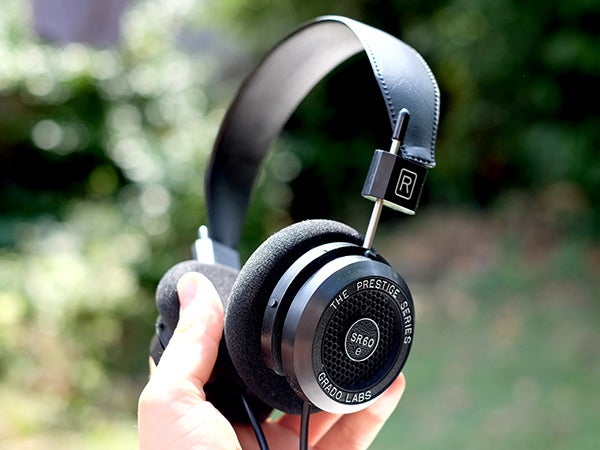 The SR60e outside their normal habitat: indoors

These headphones leak sound in both directions like almost no other on-ear pair. If a car passes you’ll hear it more than your music, and you’ll become a public menace by wearing them on the bus – anyone nearby will be able to hear what you’re listening to. Especially as you’d need to crank up the volume to deal with the ambient noise.

Some open headphones can be used in the office because they manage to avoid leaking out sound too much, but do so with the Grado SR60e and the person sitting next to you would be quite justified in raiding the stationary cupboard and pelting you with everything they can find. They’re very leaky indeed. 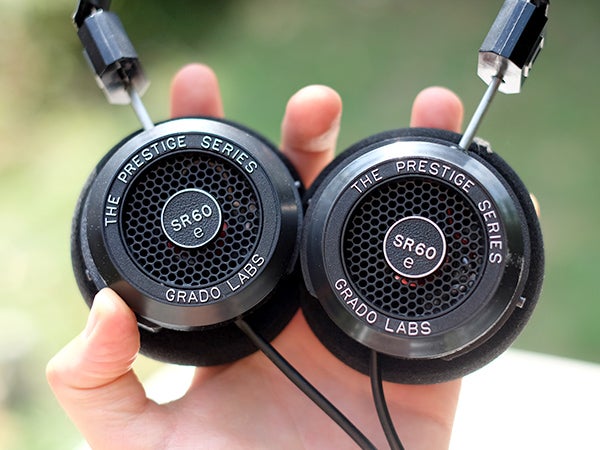 The Grado SR60e’s construction is pretty basic too. Using a static headband and no folding mechanism, there’s very little to go wrong, but they don’t feel like they could take too much rough treatment. What keeps them together are two rods of steel that look a bit like the stuff used to make coat hangers. The metal that makes up the skeleton of the headband is extremely skinny too, only taking up a tiny part of the padding that rests on your head.

Plastic ear cup housings and fake leather headband padding finishes off what is quite conspicuously a pretty simple, low-cost construction. While we’d be happy to use them out and about if it wasn’t for the open design, they don’t will you to abuse them – some headphones claim you can stretch their headbands to within an inch of their life without damage. We wouldn’t recommend trying that here. 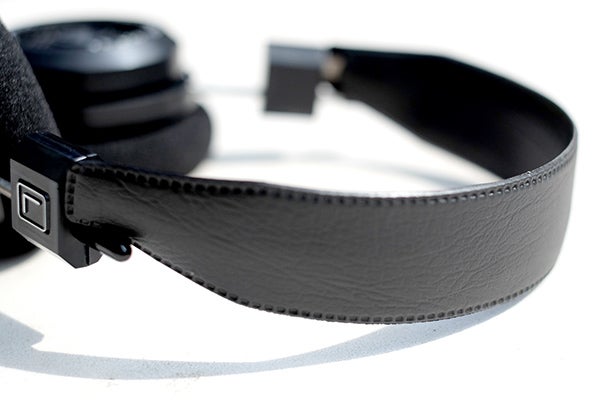 Comfort is OK, however. The foam ear pads are a bit scratchy and some might find the headband a bit clamp-y, but we didn’t, and even the packaging suggests the headband will loosen up a bit with use.

The Grado SR60e cable is another design that these are intended for at-home use. It’s chunky and too long to be used to comfortably plug into a phone without leaving some of it dangling around your knees. Owners of previous SR60 headphones have complained about cable quality, but it certainly seems a cut above the usual super-thin portable type, even if the length before the Y-splitter is quite prone to kinks. 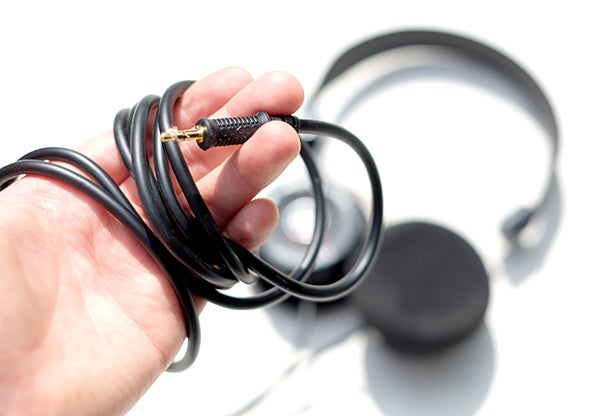 By now you’re probably getting the idea – Grado doesn’t spend a lot of its budget on flashy extras. And there’s zero chance of seeing a Grado SR60e advert on a bus next to an ad for the latest bit of dross to be released at the cinema. This continues in the packaging. The £79 version we received (£99 version includes a case) comes in a thin cardboard box with some inner foam and what is basically an A4 newsletter from the Grado family. Grado has been around for decades, but it’s no Sennheiser-like leviathan. 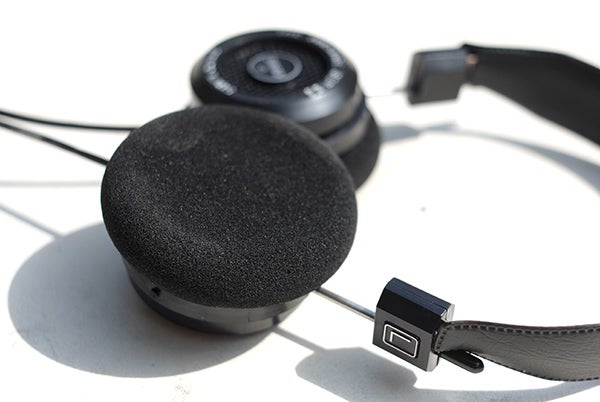 Grado says it has improved the cable design, with a consistent connection from the jack right to the driver, and the driver has been redesigned. One of the main issues with previous SR60 generations is that they’re not particularly great at dealing with high volumes, where distortion is introduced – not necessarily crackly-ness, just the kind that makes sound somewhat ugly or harsh.

Regardless of whether they’re much of an improvement or not, the Grado SR60e sound superb, quite probably the best you can get at the price short of striking out lucky bidding for some 1970s electrostatic headphones from eBay.

The sound is far more open, with much clearer imaging than you get with most £200 closed-back on-ear headphones, let alone £80 ones. There are benefits to having an open design that mitigate all those inconvenient bits.

Treble detail is class-leading at the price too. We compared them to the £170 Beats Solo 2, which were veiled and soft by comparison. 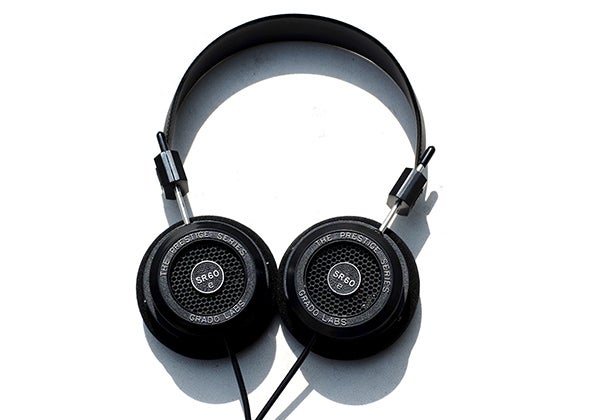 Part of the reason why the Grado Sr60e can provide this kind of clarity is because there’s no warm and mushy mid-range or bass bloat that often acts as a sort of sonic chocolate sauce slathered over everything in cheaper headphones. Bass is taut and fairly deep, providing a good punch for an open headphone, if not quite the sub-bass fun of something like the Sennheiser Momentum – again, much more expensive headphones.

While some of the Grado SR60e’s best characteristics are partly there as a result of the open design, the presentation here is actually a little unusual for a pair of this type. Where Sennheiser’s open headphones try to emphasise their airiness with a mid-range that’s not terribly forward, leading to a sound that’s very open but a little diffuse (and some might argue not exciting), the Grados are forward and almost aggressive. Vocals seems to be right on your ears, rather than stepped back as part of a more relaxed, somewhat-distant soundstage.

Whether you’ll like this brand of forwardness is a pure preference thing, but it is one of Grado’s signature moves.

So what about the harshness issue complained about in the Grado SR60 and SR60i? Is it gone? Not entirely. After a first listen we decided to run the SR60e in for a couple of days as there was clear mid-range harshness. We’re not big believers in ‘burning in’ suddenly radically changing the character of a headphone, but it can alter dynamic drivers somewhat.

With a few dozen hours on the clock, the Grado SR60e are a fair bit easier on the ears. However there is some of that spiky stubbornness of the design audible in the sound too. They may be smoother than the SR60i, but especially at higher volumes the otherwise-impressive and highly detailed mid-range can become quite abrasive. This can be improved by using a warm-sounding headphone amp, even a cheap one.

While the Grado GR60e are great for rocking out with thanks to their detailed, forward mid-range, it’s rocking out to be done at relatively low volumes to avoid ear discomfort. It’s the sound of Grado really straining against the limits of what can be done with a £70-80 headphone. For a more nuanced mid-range, consider looking at Grado’s more expensive headphones. 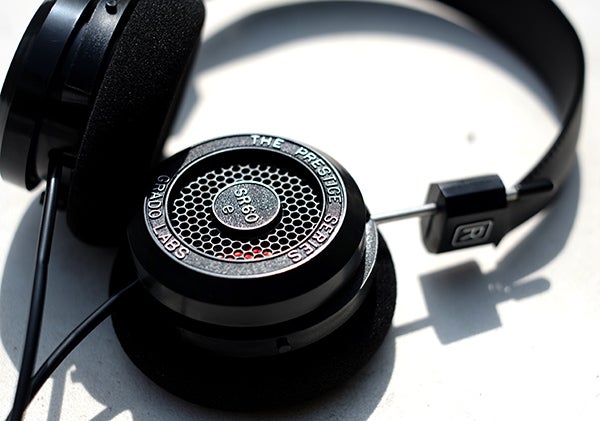 Should I buy the Grado SR60e?

The Grado SR60e are the perfect headphones to pick up to find out if you’re susceptible to the audio bug or not. You get a serious sound signature for around half the price of entry-level style headphones like the Samsung Level On Ear and Beats Solo 2.

While the less ear-coddling sound of the Grado SR60e isn’t for everyone, it is categorically superior from a technical perspective. It’s serious sound, at a fairly trivial price.

Where you pay is practicality. The Grado SR60e are useless for the outdoors unless you live in the middle of nowhere thanks to severe sound leakage.

The Grado SR60e are some of the best sounding sub-£150 headphones, making their £79 price all the more remarkable. It’s just a shame they are no use as a portable pair.