Grado has a long history of producing top quality headphones with a
signature mid-range heavy sound but with its range-topping PS1000 model
it veered slightly away from this tone producing a flatter more
‘accurate’ sound that we loved. However, for most of us £1,500 is a bit
more than we’re willing to spend on headphones, no matter how good.
Thankfully Grado has been accommodating enough to produce a more
budget-friendly version of its flagship model in the form of the Grado
PS500. Retailing for a still substantial £650, they remain a premium
offering but for the quality of sound they produce you could almost
consider them a bargain.


The Grado PS500 are styled in traditional Grado fashion, eschewing
anything extraneous or fancy in favour of putting as much money and
effort as possible into making the product sound good rather than look
good. In principle it’s a philosophy we admire, though we must admit to
being a little tired of how punishingly it’s applied. Admittedly there’s
an argument for saying that few over-ear headphones look genuinely
attractive but here the point is proved with gusto. The skimpy headband
and large earpieces combine to create a look that can only be considered
charming in its retroness. 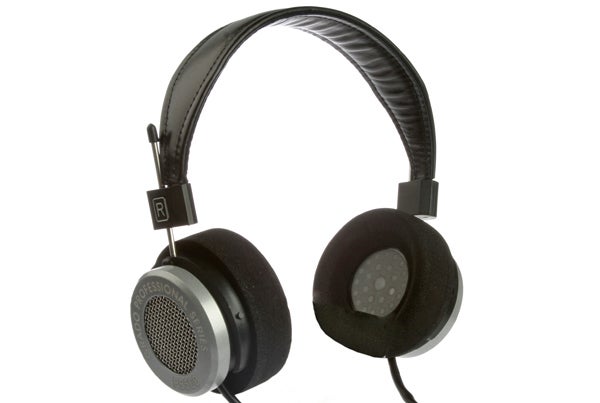 What makes this largely forgivable is that these are meant purely as a
listen-at-home headphone. Their open-back design means they block almost
no outside noise and what you’re listening to is leaked to the outside
world, so they are completely unsuited for travel. Hammering home the
final nail for portability is the thick, weighty cable, which is
totally impractical for stuffing in a pocket. The only concession to
travel is the ‘phones’ relatively low weight of 300g, which not only
stops them sitting hard on your head but also stops them flying off your
noggin from the slightest movement – in comparison the 500g PS1000 are
highly prone to taking a tumble.

Sadly this is the only area where these phones can be considered
comfortable. We don’t overly mind the essentially non-existent padding
on the leather wrapped headband or the simple adjustment mechanism that
lets the earcups rotate and slide freely on thick metal poles – indeed
this mounting system allows the cups to adjust nicely to the contours of
your head. However the padding on the earcups is simply inadequate.
Grado has long been criticised for using somewhat scratchy uncovered foam that’s
not overly soft, and so it is on these headphones. They’re not
horrendously uncomfortable by any stretch, and our thoughts on comfort
are compromised slightly by many of us wearing glasses, but regularly after an hour or so’s listening we’d be pretty uncomfortable. Overall
we’ve encountered many a more comfortable pair. 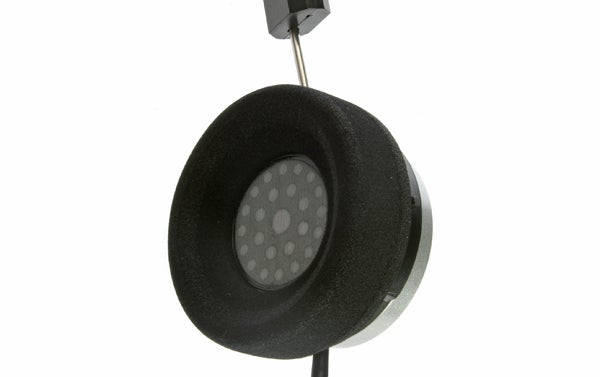 Part of the problem is the on- rather than over-ear design. Both the
padding and the speaker grille come in contact with the ear and apply
mild but eventually uncomfortable pressure. In contrast, over-ear designs largely avoid putting pressure on the ear by fully surrounding
it. The PS1000 use much larger cushions that achieve precisely this and
are much more comfortable because of it so why Grado is still persisting
with this on-ear design throughout most of its range, we don’t know.
You can buy the large cushions separately but they cost a galling £50. 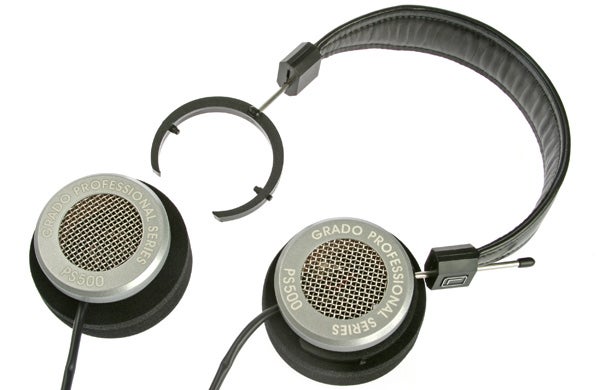 Before we get too carried away with the negative stuff, though, let’s
return to some positives. The build quality is superb. The majority of
the headphones’ structure is metal aside from the plastic parts that
clasp the adjustment rods and the clips for the earcups themselves, but
these are both thick and feel strong. The headband is finished in
real leather and the earpieces themselves are built like the proverbial
out house. They may look all metal (aluminium alloy) but they actually
have a mahogony core into which the driver is mounted. The combination
works to almost eliminate transient distortions, resulting in a truer
representation of your music. 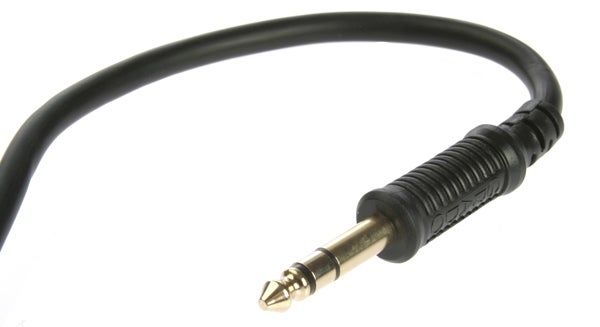 The cable is also of excellent quality with eight conductors made from
ultra high purity long crystal (UHPLC) copper for maximum signal purity.
Moreover, it’s thick and strong so should take plenty of wheelie chair
punishment. Strangely, though, it’s ‘only’ 2m long which, while adequate
if you’re sitting next to your source, is insufficient if you like to
sit back from your source, on a sofa or such like. 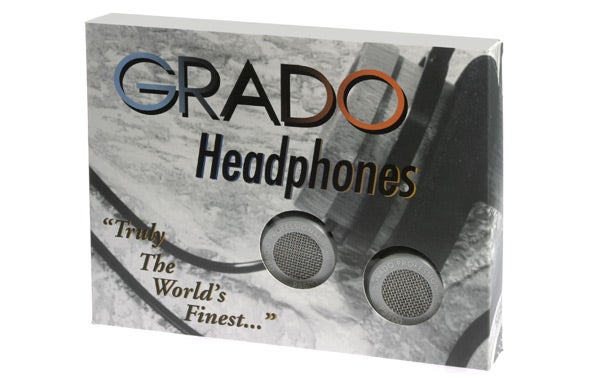 Terminating the cable is a quality gold plated 1/4inch (6.35mm) jack.
Disappointingly you don’t get a converter for a smaller 1/8in jack in
the box, unlike with the PS1000, which is an annoyance for those wanting
to use these headphones with an mp3 player – a perfectly sensible
desire considering the low 32ohm impendence of these phones.
Incidentally, you get nothing else in the comically basic box – again,
it’s all about saving money to invest in the headphones themselves.

So far, then, the Grado PS500 haven’t exactly excelled, though it’s worth noting that few of our complaints are truly problematic for using these headphones in a dedicated home listening situation. Nevertheless, the they do rely almost completely on their sound quality to win hearts and thankfully it’s here that they deliver.

The most immediate impression is how even they sound. There’s no forced bass, no shrillness to treble and no over-egged mid-range warmth. These phones just deliver precisely what’s presented to them. We were cautioned by Grado’s PR that we may be unimpressed at this very fact, as there’s no ‘wow’ factor from a fat bottom end or forced mid-range, but he couldn’t have been more wrong.

From Chopin to Children of Bodom, La Roux to Led Zeppelin, Pink Floyd to Prong, all are delivered with the requisite detail, warmth and clout that the tracks demand. Perhaps real bassheads will miss the constant pummeling that some sets give but where required these headphones still extended incredibly far and deliver with surprising gusto – you’re often caught out when a bassy track or the rumble of an explosion in a movie kicks in. Indeed this is precisely what makes them great for mastering, and is why these are from the ‘professional’ series. 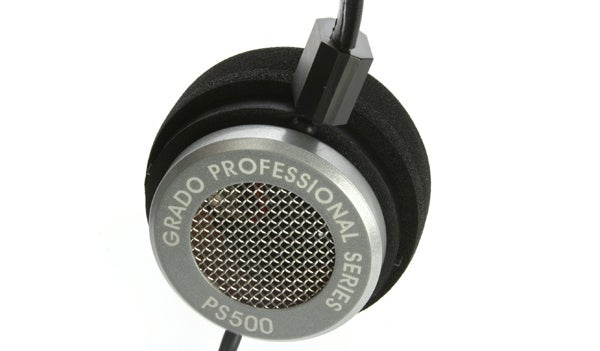 Perhaps the biggest benefit of this flat sound is that the top-end doesn’t feel forced, and thus doesn’t become fatiguing. It’s surprisingly just how many supposedly high-end ear and headphones actually become tiring after just an hour or so’s listening. With these you can listen for hours… well, if the overall fit is to your liking.

Openness is also a key characteristic. That open-back design gives a sense that the sound is filling out the room around you so you can pick out instruments as though you were there. Being headphones rather than surround sound speakers you don’t get quite the sense of front to back depth but we’ve heard few headphones that do better. One exception is these ‘phones bigger brother, the PS1000. Their over-ear design allows the earpieces to be held just that bit further away from the ear, opening up the soundscape even further, in all directions. The downside of the PS500’s open back design is you really ”need” to be in a quiet environment to get the most from these headphones. 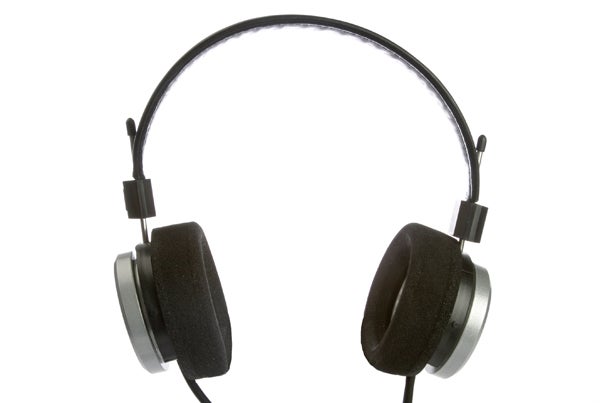 It’s almost difficult to know where to begin when it comes to talking about the detail these headphones can reveal. The old clichés of being able to hear the scrape of the pick on a guitar string, the creak of the sustain pedal on a piano or the subtleties of a singer taking in a breath are far surpassed by what’s on offer here. Listen carefully and you’ll pick out different guitar layers, the squeak of a drummer’s stool, or the shift in timbre as a french horn player cycles their circular breathing. It’s mesmerising stuff. 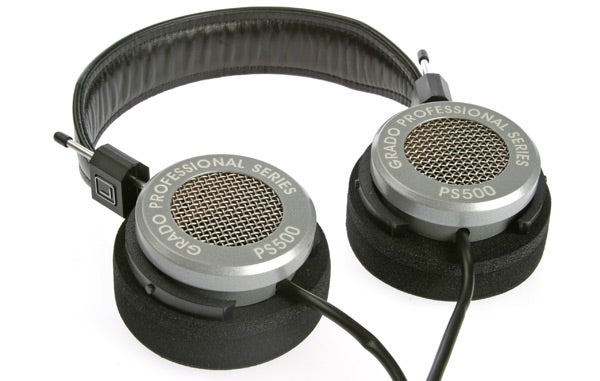 You may at this point be wondering just what’s missing compared to the likes of the three times more expensive PS1000. Well, the frequency range of the two sets tells something of the story. The PS1000 go from 5-50,000Hz while the PS500 run from 14-29,000Hz. Clearly a large chunk of the PS1000 range is actually inaudible but by extending so far they somehow manage to add extra space to your listening, moving you one step closer to feeling like you’re truly there rather than just listening to a truly great recording. Crucially, like the PS1000, the PS500 drivers are matched to within 0.05db of each other, which goes a long way to building the truly astonishing soundscape. 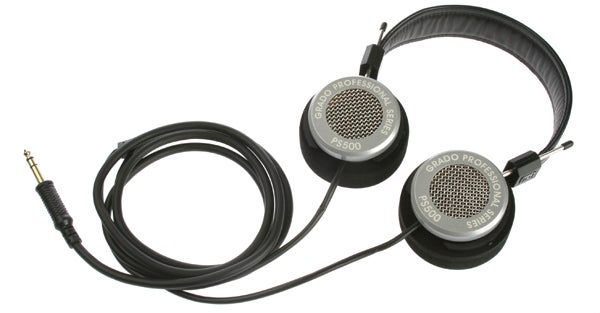 Compared to rest of the Grado range, the PS series sound much less mid-range heavy, though they still have  a touch more than some more clinical sets, which gives them that little bit more exciting a sound. As for other competing headphones of the same price, well there aren’t all that many that exactly match the PS500.

There are plenty at around the £200-£400 mark and at £800 (Sennheiser HD800 for instance) but there are only a couple of sets at £650ish. These include the Audio-Technica ATH W1000x and HiFiMan HE-5LE. The former of these is closed-back, so something of a different kettle of fish, while the HiFiMan set are high-impedence so simply won’t cut it being driven from an mp3 player, though otherwise they are excellent and arguably a better choice if most of your listening is classical. Also both are more comfortable than the PS500.

The Grado PS500 are an exceptional-sounding set of headphones. Their flat, un-coloured sound makes them ideal for audio mastering as well as relaxed home listening. Highs, mids and bass are all delivered with the same detail and clout so it’s just down to the track to make the sonic decisions. They’re not a versatile set, with a chunky open-back design, but you can at least drive them using a normal mp3 player, and for their price they offer among the best sonic experiences available. However, Grado’s insistence on utilitarian design means these aren’t the most comfortable, and you don’t even get a jack adapter in the box.