Those of you who know your audio onions should be well aware that Grado has an excellent reputation in the audio arena. From its ungodly expensive PS1000 ‘professional series’ to the more consumer-friendly iGrado headphones, it isn’t too hard to find a great-sounding Grado product to suit your budget. The latest from Grado Labs, the Grado GR8 in-ear headphones, takes a slightly different direction, however. Instead of fleshing out the already complete headphone range further, this set of in-ear ‘phones purport to bring Grado’s expertise to the in-ear market.


The price is certainly what you’d expect from a quality Grado product. At a touch under £270 these aren’t going to appeal to your average punter. If Grado is going to persuade would-be buyers – who could grab a pair of tried, tested and cheaper Shure SE530 earphones – to pick its own fare, then it’s going to have to do something special. 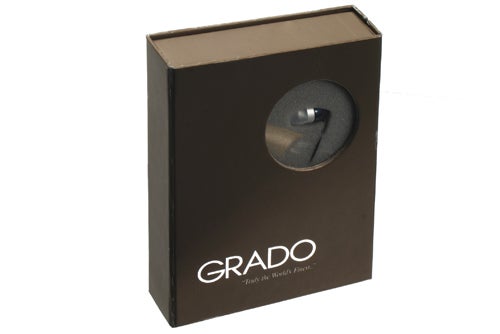 Initial impressions of the Grado GR8 earphones is very good. The plastic casing doesn’t quite have the high-end feel that the rubberised finish of Shure’s IEMs do, but the dark, slightly glittery blue colouring is very nice. The reinforced connection where the cables reach each earpiece imparts confidence in the build quality as does said cable’s rubberised feel. Such coatings may not actually affect durability but they show attention to detail, which is exactly what £265 should get you.


As someone who often listens to music in bed, in the dark, I’m always pleased when earphones offer some kind of physical differentiation between the left and right earpiece as the GR8 do. There’s a raised bump on the left ‘phone to cater to that need nicely. What’s more, the Grado GR8 are extremely comfortable to wear. They can be worn with the cable running either straight down or over the ear and in both configurations are barely noticeable in the ear. I didn’t notice any rubbing noise from the cable either, which is always good.

Letting Grado’s GR8 ‘phones down a little is the meagre offering of just three silicone tips: small, medium, and large. When even comparatively cheap earphones are now coming with a plethora of both silicone and foam tips this seems a little bit stingy. The tips are comfortable enough, however, and I was able to get a good seal.


The specs do betray one aspect of the GR8s with alacrity. Their 120ohm impedance means that these ‘phones really do benefit from the use of an amplifier. That’s not to say that an iPod touch, a Cowon iAudio 9 or a similar player can’t drive these earphones well enough for use out and about, but this isn’t the ideal setup. Luckily, even something as cheap and cheerful as the FiiO E5 should provide a helpful boost to the output of your PMP of choice.

Thankfully the GR8s compensate for this small inconvenience. If your source does have enough power to drive the GR8s without straining, or you have an amp, the result is commendable. Raise the volume to a decent level and the outcome is a forceful output, but one that doesn’t feel at all strained. Cheaper earphones might push out a lot of sound at high volumes, but you can bet that everything will be muddied up like nobody’s business. Not so with the Grado GR8s; you’re eardrums will give in long before these ‘phones.


Another interesting design feature is Grado’s use of a single moving armature in the GR8s. Pretty much all earphones at this price range use at least dual-driver if not triple-driver designs – the three year old Ultimate Ears triple.fi 10 Pro Earphones being a prime example of the latter design. A single driver does bring with it the advantage of needing no crossover, which is where most multi-driver earphones fall down. Certainly the GR8s have a beautifully cohesive soundstage. There’s no obvious transition between woofers and tweeters to mar the output, just equally clear reproduction of low, mid and high end frequencies.


This cohesiveness doesn’t mean there isn’t plenty of stereo separation, though. When tracks call for it, the left and right channels maintain a great distinction, which of course helps with developing a wide soundstage and, ultimately, keeps them truer to the recording studio’s intentions. Obviously with the drivers sitting in your ear, that special all-encompassing awareness afforded by a great set of headphones isn’t possible, but as IEMs go on this front, the GR8s are up with the best of them.

Swapping between the GR8s and my Shure SE420s on tracks as wide ranging as David Bowie’s Life on Mars, Jimmy Eat World’s Dizzy or even the funeral march from Wagner’s Gotterdammerung, I couldn’t help but be impressed with how capably the GR8s performed, offering warmth and clarity aplenty. It’s always a good sign when I find myself flitting between albums, praising the excellent mastering of one over the failings of another.

I honestly wasn’t all that convinced that a pair of single-driver earphones could match the performance of the SE420s, but they can. Whether the more distinct, but slightly more clinical sound of the Shure SE420s, or the warmer but slightly less precise output of the Grado GR8s is better is a matter of taste, but for what it’s worth I lean ever so slightly towards the GR8s.


Despite comparing the Grado GR8s with the Shure SE420s in terms of performance, it’s Shure’s SE530s that compare in terms of price. And against the cream of Shure’s crop, it’s advantage SE530. Swapping between the GR8s and SE530s with the likes of Muse’s three-part Exogenesis and there’s simply no competition. With the SE530s, each instrument sounds completely distinct, but at the same time the soundstage never comes across anything but cohesively. Conversely, through the Grado GR8s, each instrument is still there, but everything is just a little flatter.


I really like the Grado GR8s, but they’re simply not price-competitive at the moment. That may change once the SE420s and SE530s are discontinued to make way for the new SE425 and SE535 earphones Shure announced at CES. But up until then, the current cheaper or similarly-priced Shures are preferable.