Grado will happily tell you that the GR10 earphones are an evolutionary improvement over their predecessors, the excellent but expensive GR8 earphones. More importantly, however, they are indisputably among the very best of all of the earphones we’ve ever had the chance to try out. Alas, though yet this new offering is much more expensive at almost £400, for which money a lot of compelling alternatives can be had. So at one and the same time you really should buy a pair of Grado GR10 earphones, but also you really shouldn’t buy a pair of GR10 earphones. 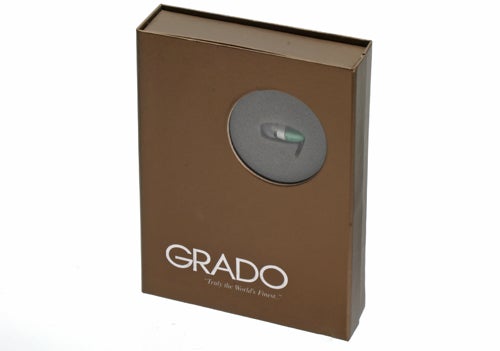 This quandary is evident even in the packaging of the Grado GR10s. Like the GR8s, the GR10s come is a simple goldish-brown box, containing only the earphones themselves, three pairs of silicone tips (small, medium and large) and some replacement filters. There’s no carrying case, no aeroplane adaptor and no 3.5mm to 6.5mm adaptor – nothing you might describe as a value add.


Some might call that stingy, especially given the price of the GR10s, but the minimalist bundle does have an air of classiness to it. Indeed, other than a cutaway view of one earpiece, the company’s name and tagline – “truly the world’s finest” – on the front, and the product ID on the bottom, there’s no text or imagery adorning the packaging. There’s something refreshing about a product being allowed to speak for itself. You don’t need fanfare and a parade to explain why you would buy a Faberge egg, after all.

The design of the earphones is the same as the GR8s and, as we remarked of those, elegant in its simplicity. We preferred the blue of the GR8s to the Green of the GR10s, but the latter do boast a pleasant enough shade at least. The presence of a slight notch on the left earpiece will prove useful if the GR10s L and R labels rub off as quickly as the GR8s’ did. Although erring on the large size, the earpieces nestle comfortably in the ear, and the tips give a surprisingly good seal for silicone, though not as good as foam. The cabling has a pleasant-feeling, very slightly rubberised finish, and feels resilient, although not as much so as that of, say, the Shure SE535 – and with nothing as clever as their detachable, swivelling connectors.

Although exteriorly the only change is the colour scheme, the GR10s have a number of differences to the GR8s internally. Improvements in the materials used are claimed to offer improved frequency response in both the high and low end of the GR10s 20Hz to 20Khz reproduction range, delivering more detail than the GR8s, which were already impressively detailed earphones. Direct comparison proves the boast accurate; the GR10s definitely do sound better than the GR8s, with subtle details in the low and high end – most obviously percussion and string instruments respectively – standing out more clearly.

From an iPod with compressed music, the difference is subtle, but with a good DAC and amplifier used to deliver lossless audio to the GR10s, on tracks that have the type of instrumentation that the improvements to these earphones highlight its definitely noticeable. It’s not revelatory in the way that moving from a pair of bundled iPod earphones to a set of custom moulded JH Audio earphones might be; you probably won’t find yourself noticing details you never realised where there, but you will find that they become more integrated in the mix, not a background detail you have to strain to hear.


It’s probably only the type of person who really does like to tell that a cymbal hit was at the edge, not the centre, who will even consider this worth paying £400 for. Luckily for Grado, such people do exist; in fact the company’s reputation for excellence is propagated by those very customers.


The GR10s have an impedance of 32-ohms, versus the 120-ohms of the GR8s. The upshot is that the GR10s are easier to drive, especially with typically low-output devices such as mobile phones and portable media players. This is obviously good because having a lower the output volume from your playback device makes the introduction of distortion by the amplifier less likely.

The GR10s certainly have no problem going loud. There’s no distortion at any volumes that could be considered safe for the human ear to be prolonged to for any length of time. The result is a reproduction that is forceful, but not forced and there’s a particularly good punch to the low-end, which doesn’t have the same uncomfortable ‘kick-in-the-head’ feel of many bass-heavy earphones, and sounds all the better for it.

Unsurprisingly these improvements make the GR10s an exceptional-sounding pair of earphones. Bearing in mind how highly we praised the GR8, it’s not a surprise that we’re impressed by their successors. That shouldn’t detract from the technical achievement of the GR10s, though The GR10s may have a single, moving armature in each earpiece, but they’ll happily go toe to toe with triple-driver earphones in the same price range from the likes of Shure and Westone.


It’s not just accuracy that the Grado GR10s offer up, though, they also have a huge soundstage for an IEM. That the drivers are sitting in your ear limits the width of this soundstage – music is still definitely coming from within, not without, your ears. The depth that the GR10s produce is nothing short of brilliant, though, and if you’re listening to tracks recorded to be played on a real sound system, the benefit is tangible. Live recordings especially benefit from this, with big epic pieces (Space Dementia from Muse’s Hullabaloo soundtrack, for example) sounding, well, big and epic. 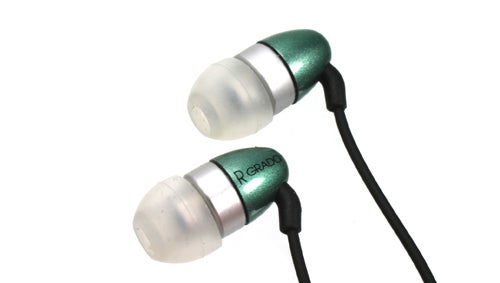 What really appeals about the GR10s is that, like Grado’s high-end headphones, such as the oft-lauded RS-1s (described by many as the best you can buy from any manufacturer), the GR10 earphones are downright fun to listen to. The Grado GR10 earphones they deliver what we can only call a sense of energy, a sense that you want, nay need, to be moving along with whatever music you’re listening to. For want of a better description, the GR10s make music sound alive in a way we can’t remember any other earphones managing.


We can’t ignore the price of the Grado GR10 earphones, they’re inescapably expensive, but so are rival earphones such as the Shure SE535s, and we have no qualms about recommending them either – quality never did come cheap. What’s more important is whether anyone paying £400 for a pair of Grado GR10s would feel cheated and we simply can’t see it happening.