A stylish pizza oven that's super-easy to set up. A choice of gas and wood fuel sources help add to the Gozney Roccbox's flexibility, but we found that wood burnt too quickly and the oven didn't distribute heat evenly. As a result, meat took too long to cook, and pizza was unevenly cooked. Given the high price, a pizza stone for your existing BBQ would probably make a better choice for most.

If Uber Eats doesn’t serve your area, or you have a party of cheese- and meat-lovers to entertain, a home pizza oven could prove ideal. A portable model such as the Gozney Roccbox offers far greater flexibility and ease of use than one built in the back garden. Combining the thermal qualities that you’d expect from a brick oven with the option of cooking either on gas or wood, and a thermometer to gauge the temperature inside, the Roccbox should be all you need to cook everything from pizzas to meat dishes.

A fiddly opening and uneven temperatures in my tests delivered less than ideal results, though.

Gozney Roccbox – What you need to know

Having built a few barbecues in the past, one of Roccbox’s most appealing factors is that there’s no assembly required. Once it’s out of the box, all you need to do is straighten the legs (note that they don’t lock into place, so if you move it then they tend to buckle), then either hook up the patio gas supply to the burner or attach the wood hopper.

While it’s simple to set up in a garden, its makers’ aspirations of taking Roccbox to the beach or on a picnic are pretty far-fetched – unless you have your car nearby. Not only is it heavy, it’s bulky and awkward to move around, too. Whoever gets to lug it down onto the sands and back again when it’s still warm and a bit smoky will certainly have drawn the short straw that day.

I found that both methods of lighting were easy to get going. The gas burner lit almost straight away and reached the pizza cooking temperature of 300ºC in about 20 minutes. 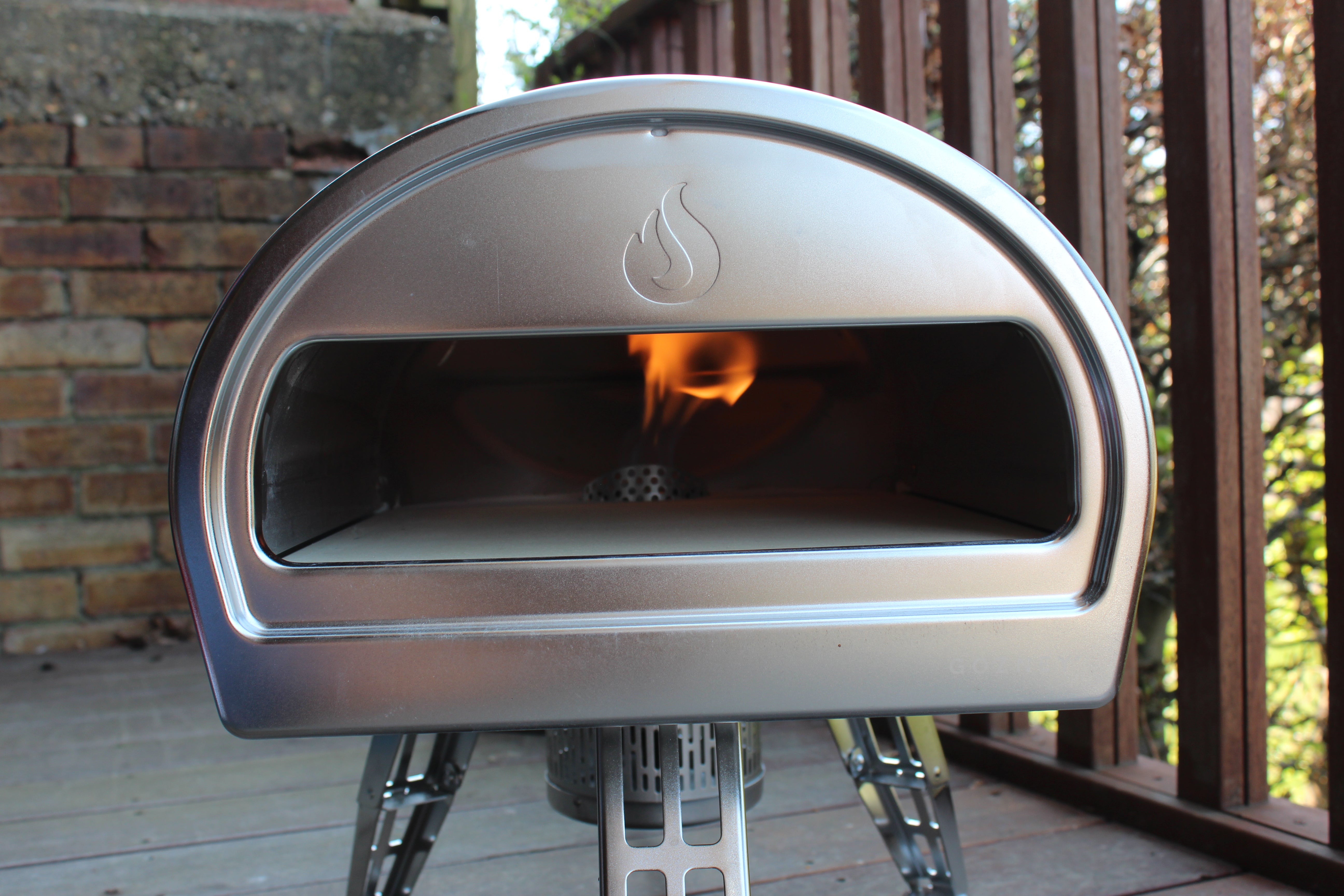 The oven is easy to light when using gas

Cooking with wood proved to be more difficult – while it was easy to initially light the kindling, the small wood hopper resulted in rapid burning of the available fuel. It was difficult to maintain a temperature of anything above 200ºC, even when more wood was added. It’s easy to use wood in the oven, but we found that the fuel burnt quickly

If you’re skilled at getting fresh pizza in and out of a narrow gap, then you won’t experience any difficulties using the Roccbox. I, however, found it frustrating. The included pizza paddle was useless – uncooked dough stuck to the surface and it was ineffective for retrieving the contents. My own tongs were easier to use.

Other than the paddle, there are no accessories nor a cover for it, which is disappointing given the price point. The paddle couldn’t be used for retrieving meat or turning it over – so again I deferred to my tongs. The Gozney Roccbox has a handy temperature gauge, but it doesn’t tell the whole story

There’s no denying that Roccbox’s temperature gauge is useful – after all, a brick-built oven would require guesswork to determine when it’s ready to cook – but it can be misleading. The probe is located below the stone, but judging from a partially cooked pizza, thoroughly burnt pizza and a 40-minute wait for meat that should have seared in half that time, I didn’t find it particularly reliable.

During cooking, the temperature was distinctly cooler at the front of the oven than at the back. Considering that it was a windless sunny day when I was testing, there weren’t any obvious external factors that could have been affecting the consistency of heat within. Its “rolling flame” feature, designed to spread heat throughout the chamber, worked better when cooking with gas than wood. There’s a thermometer, but we didn’t find that it gave us the whole picture of what was going in inside the oven

After cooking two failed dishes and waiting some time for a third, it was easy to feel disheartened by the Roccbox when it seemed to have so much potential. If you’re willing to persevere with it in your quest for the perfect pizza at home then you may have more success, but in my tests it fell short of expectations.

Why buy the Gozney Roccbox?

You can buy a pizza stone for your oven for around £30; similar pizza ovens by Ooni cost less than £250; or you could pick up a Firepod for about £300. As such, it isn’t  immediately clear what the rest of Roccbox’s price brings. If you already have a good barbecue, you’d be better off investing in a compatible pizza stone.

That said, if you love the Roccbox’s funky futuristic design, and are willing to spend some time practising cooking with it, there may be sufficient Margherita-shaped rewards in your future.