What is the GoXtreme Vision 4K?

The Vision 4K is the second from top model in the GoXtreme range. Unlike the Endurance, the Vision 4K supports 4K resolution, albeit only at 24fps and not quite the full 4K width. If you want a higher frame rate, you’ll need the Black Hawk 4K. The Vision 4K costs only £20 more than the Endurance. So what’s the difference?

The key contrast in specification between the Endurance and Vision 4K is the 12-megapixel Sony IMX078 sensor. GoXtreme doesn’t divulge its physical size, but a bit of research indicates it’s 1/2.3-inch. 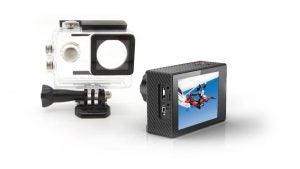 There are even WVGA, VGA and QVGA resolution options, which are low by today’s standards. But the VGA resolution has a super-high speed 240 frames/sec option, which might come in handy for when you need really slow motion.

Footage is recorded at up to 25Mbits/sec for 4K footage, which is limited for 4K footage – even the reduced version shot by the Vision 4K. A 16GB microSD card will be enough for 85 minutes of footage, although none is included in the bundle. Only capacities up to 64GB are supported, and for 4K footage a U3 Class 10 or higher is required to cope with the data rate.

Like the Endurance, the Vision 4K uses the PG1050 battery format, providing 1050mAh of charge. GoXtreme claims this will last up to 90 minutes, but since it’s a standard size, there are plenty of third-party options for adding a spare cheaply.

The GoXtreme Endurance includes an impressive bundle of accessories, and the Vision 4K comes with exactly the same selection. There are two cases included, one of which is waterproof to 30 metres and the other open. The waterproof casing requires an extra fitting plate to be screwed on, whereas the open casing has standard screw fittings top and bottom, so could be used with a regular tripod.

But there are numerous other options. Three different orientation arms are included, so the camera can be pointed in the right direction. There’s a clip-in mount for use with the two adhesive surface mounts, one of which is flat and the other slightly concave, so it fits on helmets better. There’s a bike mount, which will fit snuggly onto your handlebars, but could also secure the camera to a racing car’s roll cage. 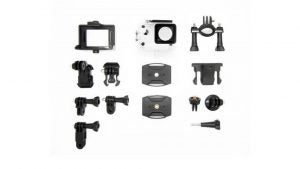 Most novel of all is the clip-on mount, which is intended to be fitted to a shirt pocket or the front of a jacket. However, this will need to be quite a stiff – rather than floppy – pocket. Otherwise, the camera will move around too much during activities and capture video that’s sure to give your audience motion sickness.

There are even some Velcro straps and cable ties included for custom-mounting options.

Since the Vision 4K has an identical physical layout to the Endurance, with only a few cosmetic differences, the control system is exactly the same and there’s still a two-inch display on the rear as well. There’s a button on the front, one on the top, and two on the side, with the latter working a digital zoom.

However, the menu provided is completely different and contains lots more features. Aside from allowing you to set the resolution, the menu provides the option to record timelapse footage at one frame every 1, 2, 5, 10, 30 or 60 seconds. There’s an HDR setting, which could be useful in highly contrasting outdoor conditions such as snowy mountains. 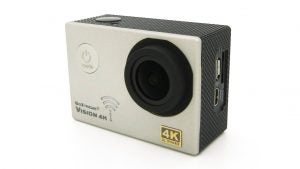 You can choose to date stamp your footage, writing this into the frame as video is recorded. There’s motion detection, should you want to use the Vision 4K as a security camera. Strangely, it seems like there are two different types of image stabilisation available, called Gyro RSC and Anti-Shaking – although I’m not sure what the difference is.

There are even some image tuning settings. Sharpness can be set to Soft, Normal or Strong, and exposure varied across a range from -2 to +2 in 13 steps. White balance options include an auto mode plus presets for daylight, cloudy, tungsten and fluorescent lighting – but there’s no manual setting. 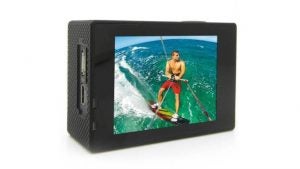 You can switch the angle of view between Wide, Medium or Narrow, and there’s a compensation mode for the fish-eye effect of a wide angle. There’s even an Aqua mode, which compensates for the colour shift caused by shooting underwater.

Despite the relatively economical price, the Vision 4K still offers built-in Wi-Fi and an app for Android and iOS called OKCAM. This is a different one to the Endurance, with a few more features than the Ez iCam app used by the latter.

As noted above, the Vision 4K doesn’t actually shoot true 4K. The vertical resolution is correct, but horizontally it’s more like 2.9K. Nevertheless, this is still a high resolution for the money, and footage is decent. Contrast is handled reasonably well and colours quite faithful.

However, the compression clearly is a little too aggressive, softening detail. There are no blocky artefacts, but you can see areas that look vaguely smudged because the compression has smoothed out the pixels to get the data rate down. This does look better than blockiness, but I’ve seen more detailed 4K footage from premium action cameras. 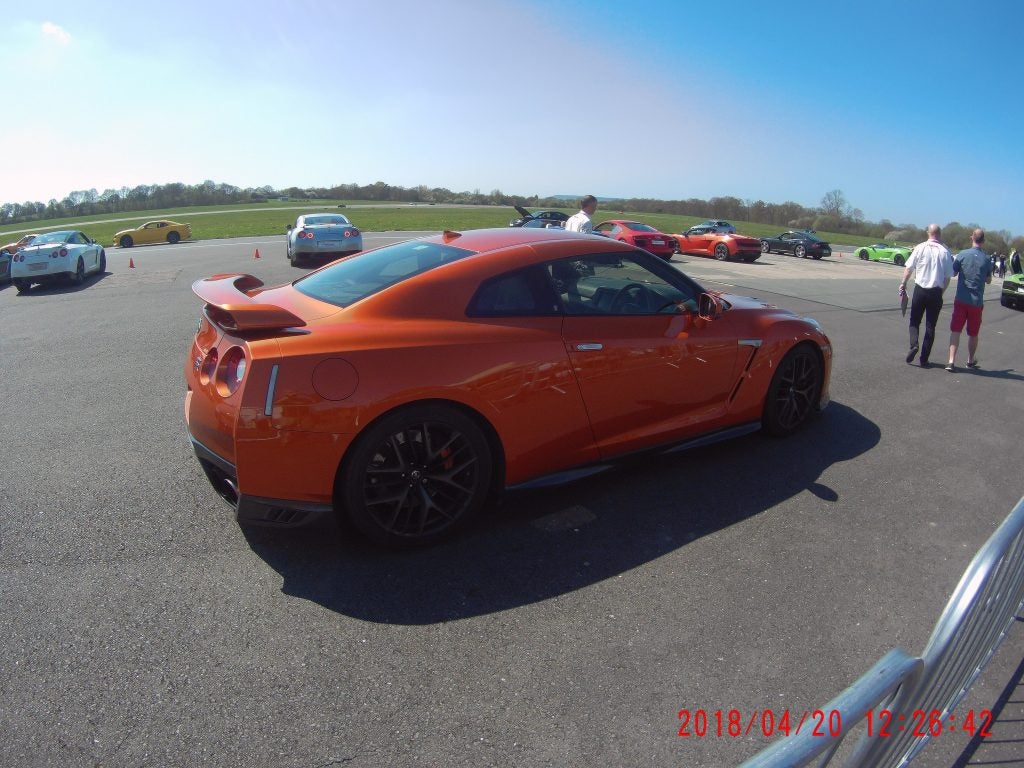 The above is a photo taken at the native 12-megapixel resolution. The lens distortion is quite pronounced, but the detail is high, colour relatively accurate, and contrast handled adequately, so you can see detail in deep shadows.

Why buy the GoXtreme Vision 4K?

The GoXtreme Vision 4K isn’t perfect, but you wouldn’t expect it to be for the price. It doesn’t shoot true 4K, and the compression rate is too high, but for the money the video quality is good – and, as with other GoXtreme cameras, the mounting bundle is excellent.

At the time of writing, it was possible to pick up the Vision 4K for the same cost as the Endurance. At £79.99, it’s an absolute bargain, and even for the £20 extra RRP it offers very good value indeed.

The GoXtreme Vision 4K may not shoot true 4K, but image quality is still good for the money and the mounting bundle very generous.