What is the GoPro Karma Grip?

While GoPro’s launch of its GoPro Karma drone went down into tech infamy faster than one of said drones falling from the sky, the one positive element was its three-axis gimbal.

Known as the Karma Grip, it’s available to buy independently of the drone for around £299/$299/€360 and is designed to work with GoPro’s latest and greatest Hero5 Black out of the box. Additional mounts are available that add support for the Hero4 and Session cameras, but tracking these down can prove tricky.

As a gimbal from GoPro itself, the Karma Grip has certain advantages over rivals such as the Removu S1 I tested recently. But unlike the Hero5 Black, which has benefited from GoPro perfecting its rugged, portable action cameras with each iteration, GoPro’s first attempt at a gimbal accessory still has room for improvement.

The Karma Grip lives up to its name with a largely rubbery surface that makes grabbing hold of it for handheld use much easier. Compared to the Removu S1’s squared off design, it conforms to your hand a little more ergonomically.

At the top of the hand-grip section are remote control buttons for operating your connected GoPro. A power button serves double duty in letting you toggle shooting mode on your camera; a HiLight Tag button is available for marking your footage for easier editing; a lock button lets you toggle stabilisation modes; and there’s the record button, too. 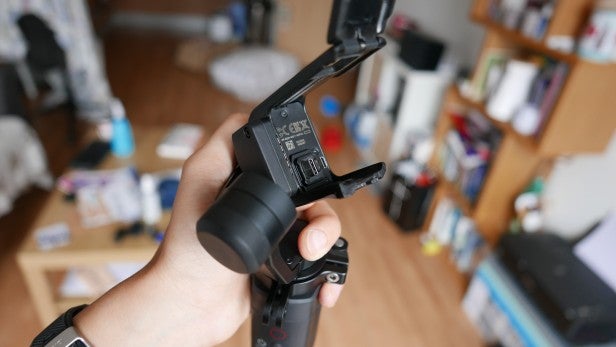 All of these remote control elements are afforded to the Karma Grip because you actually connect your GoPro Hero5 Black direct to the Karma Grip’s mount through its USB Type-C connection. There’s no Bluetooth pairing here. This means you’ll need to remove the side panel from your GoPro before simply sliding it into the frame and locking it in.

Once it’s mounted, a decent amount of your Hero5 Black’s display is obscured, which is a little annoying for those who want to actually use the LCD for framing their shots. Pairing the GoPro Capture app on your phone offers an option for a live view, but then that’s another thing to have to juggle. 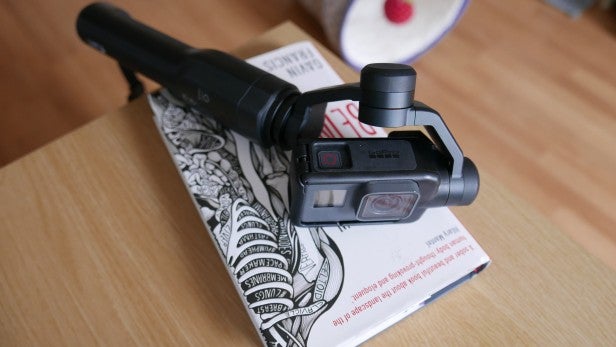 My experience once the camera was mounted wasn’t without problems. Initially, two different Hero5 Black models I tested became stuck on a ‘USB Connected’ screen, as though the cameras were connected to a computer rather than the Karma Grip.

Research suggests it’s a problem others have experienced. Some say it’s an issue with the microSD card, but I tried multiple models – and even without a memory card inserted – to no avail. In the end, I resorted to hard-resetting the Karma Grip by holding the power button for eight seconds until the four battery indicator lights lit up – three in white and the bottom in red.

Even then, once it does work, you still get greeted by the USB Connected message for a few seconds, delaying your recording. I still occasionally encountered another bug that meant the remote controls would stop controlling the connected GoPro, too. The gimbal motor itself did at least work fine, so I could manually stop and start a recording from the GoPro itself. 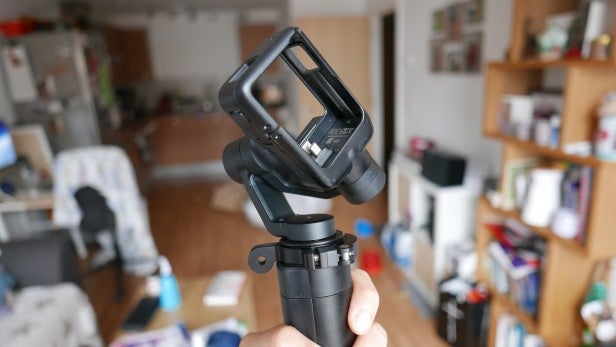 Then, when I powered down the Karma Grip, the camera would stay powered on when it should also power off. Needless to say, it wasn’t a seamless experience – and judging by forum posts elsewhere, these are issues that others have experienced, too.

One of the complaints I had about the Removu S1 was its inability to directly control your camera functions – even just triggering recording – although the S1 does benefit from having its own detachable Bluetooth remote control for controlling the gimbal itself. This included a joystick for manually adjusting the camera angle, and is something I missed on the Karma Grip.

Compared to the Removu S1, the Karma Grip is far more straightforward, since there’s no motorised gimbal that you can use that’s separate from the grip component. The Karma Grip’s gimbal does detach from the handle, but merely so you can slide on an included mounting ring, which will let you attach the Karma Grip to most places a GoPro can mount.

Frustratingly, since all the power and controls are in the grip, you have to mount the full assembly – including the grip component. This contrasts with the S1, which made for a far smaller and lighter mounted gimbal. 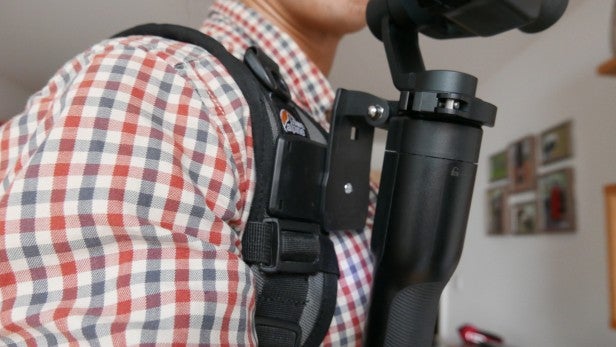 If you’re using the Karma Grip mounted to a backpack, the grip handle doesn’t get in the way since it’s still vertically orientated, which makes for shooting walking video hands-free a viable option. Attached to the top of a helmet, it’s a far more cumbersome affair, since it will need to lay horizontally.

GoPro must have realised this, as recently it released an extension cable available separately but this will cost a whopping extra £100/$100/€120, which makes the whole thing outlandishly expensive. The coiled cable will let you re-position the handle component elsewhere, such as in a backpack.

Alongside the included mounting ring, you get a hard travel case for stowing your Karma Grip and attached Hero5 Black camera. It feels hard-wearing and should keep your equipment safe. However, the case is super-bulky and awkwardly shaped, making it annoying to throw into a backpack. 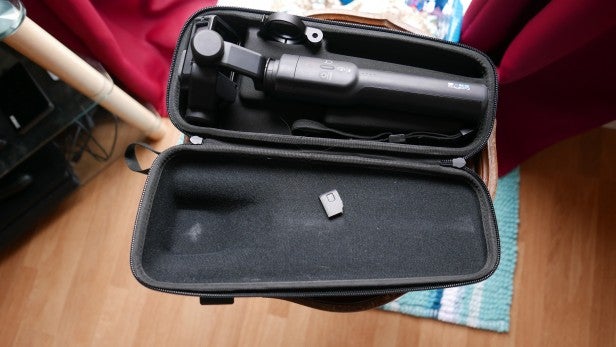 What do I do with the sidepanel door?!

It would have also been nice to have a mesh pouch to stow a USB-C cable and the side panel flap you have to remove from your GoPro. I have a strong feeling that people are likely to misplace them – and without it, your GoPro will no longer be waterproof. 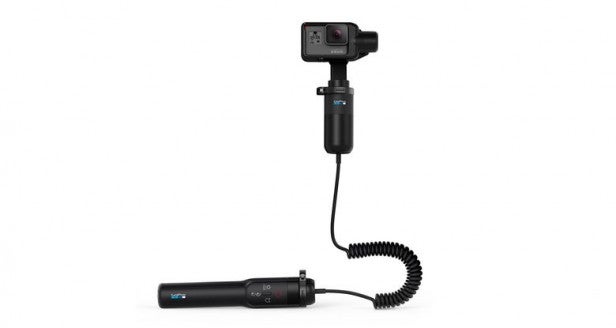 After I published my original review, GoPro sent me the aforementioned Extension Cable to test. There weren’t many surprises when it came to using it, although the setup process is a little fiddly as you need to detach the standard grip and essentially put the Extension Cable in the middle. The coiled cable adds a decent amount of reach so you can hide the powered grip component elsewhere. It’s still a rather inelegant solution, however, as the coil has a tendency to pull if you extend it too far plus the general sensation of being tethered to something. You do get velcro straps for some degree of cable management at least.

But then there’s also the problem of stowing everything away after you’re done filming. The standard case that comes with the Karma Grip can’t house a Karma Grip that’s attached to the Extension Cable. This means you have to disassemble the whole thing and stow the Extension Cable separately, which is a lot of work, especially when you might need to reassemble the next time you want to shoot. I still also feel it’s rather expensive for what you’re getting.

Without any user interaction, the Karma Grip will stabilise vertically, while still able to pan horizontally. This means you’ll get a rock-steady horizon. With a hold of the lock button, you can freely adjust the vertical angle, releasing it to lock that position. A double-press of the lock button will put the grip into a Follow mode that lets you freely point the camera in any direction, while maintaining stabilisation. 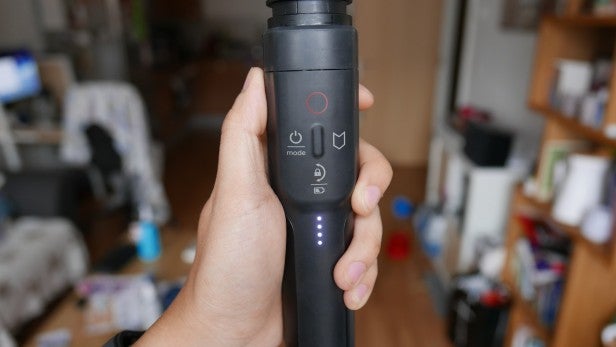 In testing, the gimbal performed fantastically well, resulting in as steady footage as I’d expect. It’s worth noting that when using the Follow mode, which allows for vertical tilt, you will get a slight bobbing motion when walking, which isn’t a problem with the standard-locked vertical angle. You can see the difference between the two videos below.

Standard shooting mode at the beginning, Follow mode later on.

Again, like the Removu S1, I felt that the Follow mode was a little slow – but it did at least result in smooth pans. There’s some operator skill involved, but with practice you’ll begin to get more professional-looking results – and certainly a major step up from electronic image stabilisation.

You’re also free to use the Karma Grip inverted, which is perfect for low-angle shooting. The skaters of the world will be happy, in that regard. There’s no awkwardly adjusting settings; you just tip the Karma Grip upside down and, provided your camera is set to auto rotate, just get on with shooting.

As for dreaded motor noise, which plagued the Removu S1 when partnered with a Hero5 Black, it’s far more subdued here. You can hear some of it in recordings, but it’s nowhere near as distracting as the S1. 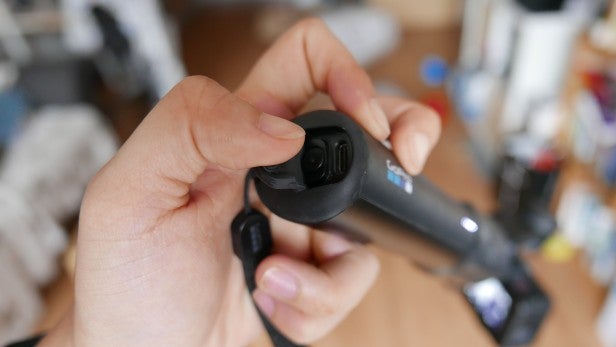 The Karma Grip is rated at a rather conservative 1hr 45mins from its non-removable battery. You charge it via USB-C on the base of the grip, which is the same cable used for the GoPro Hero5 Black camera. In testing, the battery life of the Karma Grip probably exceeded that rating ever-so-slightly. The LEDs on the handle make it obvious how much juice you have left.

It’s also a little more difficult to judge because, when turned on, the Karma Grip actually charges your attached GoPro, extending your shooting time but depleting its own battery. This is handy, because even if the Karma Grip runs out of juice, your GoPro will have been topped up so you can at least continue shooting – albeit without stabilisation.

Having said that, a removable battery would have been a great option for those wanting to carry a spare in a similar manner to the Hero5 Black camera. A USB power bank will prove handy for those who are out on a long shoot.

Should I buy the GoPro Karma Grip? 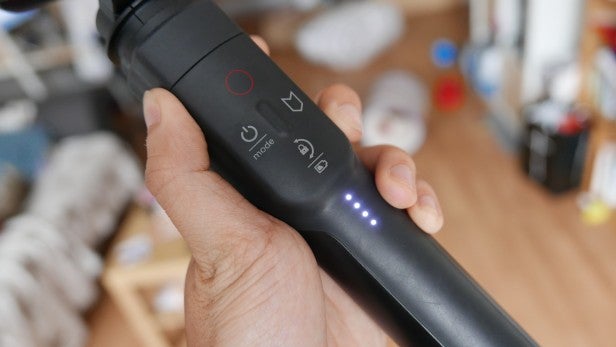 There are elements of the GoPro Karma Grip I really like. As you’d expect, it integrates well with GoPro’s Hero5 Black, providing camera controls from a convenient location. The three-axis stabilisation does a wonderful job of removing the shakes and judders from footage, which can ruin the immersion or simply cause nausea.

But there are some niggling issues, such as the control bugs I encountered that made for a frustrating user experience. Then there’s the need to mount the entire Karma Grip, rather than just the stabilising head, which makes it unwieldy in certain scenarios.

As a first attempt at a gimbal, it gets plenty right – but there’s still a lot of room for improvement. In the future I’d hope for a removable battery, possible joystick controls for the angle, and a more elegant mounting method plus ironing out the firmware.

As it stands, it’s a better choice than the Removu S1 if you’re using a Hero5 Black simply because of the motor noise issue. However, I hope bugs and other issues are sorted sooner rather than later.