What is the GoPro Karma?

GoPro’s first foray into the world of drones, the Karma was famously originally launched back in November 2016, but was recalled due to battery issues that were causing ‘copters to drop out of the sky. The problem now fixed, GoPro has relaunched its drone.

It’s available to buy in its constituent elements or as a complete package for about £1,200. The complete Karma setup consists of the drone itself, a rechargeable battery, a charger, a remote control with a 5in 720p touchscreen, a Karma Grip gimbal mount, a GoPro Hero 5 Black camera, and the Karma Case, a sturdy padded backpack that carries the lot. We’ve already written separate reviews of the Karma Grip and Hero 5 Black, so we won’t spend too much time discussing their individual merits here.

But with rivals like DJI running (or rather flying) rampant in the market, has the Karma got what it takes to soar onto would-be aerial videographers shopping lists?

The Karma Drone itself, constructed from tough plastic and weighing 1.06kg, is larger than rivals like the DJI Phantom 4 and Mavic Pro, even with its four propeller arms folded in. A lot of that is due to its low profile design: GoPro has put the gimbal and camera mount on the nose of the aircraft rather than slung it underneath, and as a consequence it’s very slim with its arms and landing gear folded. 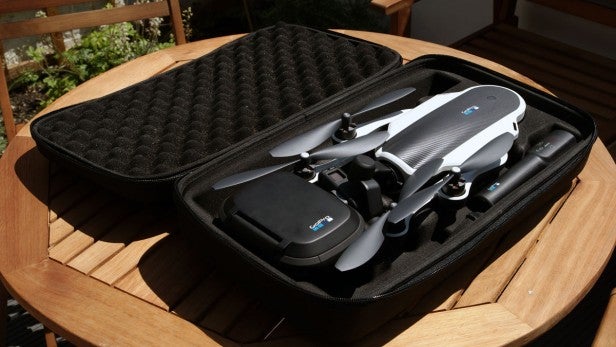 That choice was made for two reasons: first, it helps keep the propellers out of shot when you’re shooting footage (they do creep into frame at times, but not as often as they would on, say, a Phantom 4) and second, it allows the Karma Case backpack to be similarly slim, making it easy to carry and store.

The unassuming, elegant backpack (as they say, black never goes out of fashion) has space for the Karma Drone, Karma Grip, controller, charger and some extra propellers, and is lined with foam on the lid to keep everything inside in place and well protected. It’s durable, comfortable to wear, lightweight and even features a GoPro universal mount on one of the shoulder straps; attach the Karma Grip and you’ve got yourself a stabilised body cam.

As for the other items, they’re similarly well-made. The controller opens like a clamshell to reveal a clear, sharp capacitive touchscreen and classic twin-stick setup, and it’s mainly built from a sturdy matte plastic that’s easy to grip. It also features a wheel (located for your left forefinger) to control the pitch of the camera, and buttons (located for your right forefinger) for the camera shutter and the shooting mode. 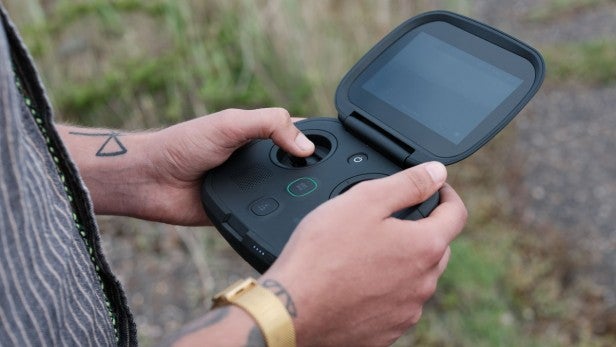 The rubber-effect Karma Grip sits similarly comfortably in your hand, with its simple controls well situated for your thumb, while unlocking and transferring the gimbal and camera across from the drone requires only a couple of twists and a few seconds.

Lastly, there’s the GoPro Hero 5 Black camera. It’s waterproof, of course – but the drone isn’t and shouldn’t be flown in rain, sleet or snow. You can also use older Hero 4 Black or Silver cameras with the Karma drone or Grip, but that’ll require investing in an optional harness for the gimbal (around £35).

All in all, it’s a well-designed, well-built collection of gear that fits into a compact, lightweight bag. It’s not as compact and lightweight as, say, the water bottle-sized DJI Mavic Pro, of course – and as we’ll see, it’s not as capable a flier, either.

DJI drones come with downward- and forward-facing sensors to help them fly steadily indoors and avoid flying into obstacles, as well as DJI’s radio-based long-range communication system. The Karma Drone feels very under-equipped in comparison: a reliance on GPS for stable flight means it requires full manual control to fly indoors (I certainly wouldn’t recommend it, except inside a huge hall or hangar), and there’s no form of collision detection at all.

The Karma does feature automatic take-off and landing – just tap an icon on the touchscreen for lift-off/touchdown – and a return-to-home function that kicks in when the battery is low or the drone moves out of control range. The latter happens fairly often, because the reliance on Wi-Fi for control means that the flight range is far shorter than with DJI’s RC-controlled quadcopters. 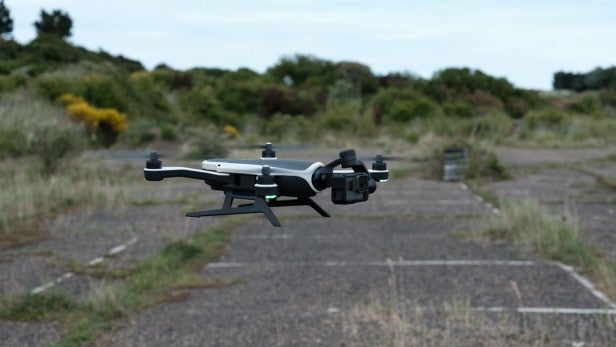 The Mavic Pro, for instance, can be flown well over a mile from your position (DJI cites 4.3 miles as the maximum range), but the Karma usually hits its limits at around 500ft. I did once manage to fly it to about 900ft away in a wide open space with few trees or buildings, but generally it needs to stay very close to the pilot.

While in flight, the Drone transmits a live video feed to the controller’s screen, giving the pilot a “cockpit” view. At short range, the image quality of this feed is sharp and punchy, but it degrades rapidly the further away you fly. Again, it feels a step behind DJI’s transmission system.

Surprisingly, the Karma Drone lacks any kind of “follow me” mode. A lot of drones are able to engage a sort of autopilot that’ll track and film the user automatically from the air, but there’s nothing like that here – a disappointment given how useful such a feature would be for the sort of extreme sportsperson that makes up GoPro’s core market. Even a less expensive model like the DJI Spark includes such a mode. 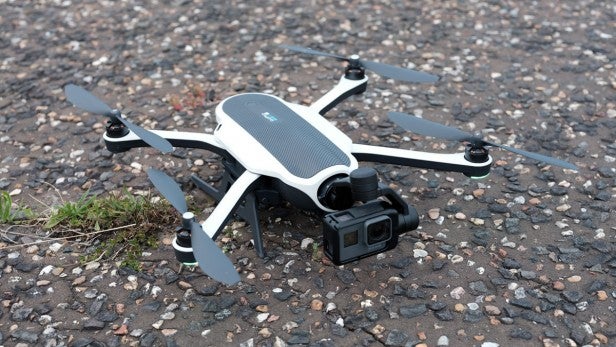 What it does have are four Auto Shot modes, which allow it to be set to fly automatically along a set of routes (circular, in a straight line etc.), leaving the pilot free to concentrate on the camerawork. These can be useful, but they’re really the base line of what should be expected of a drone in this price range.

Another area where it falls short of its DJI-made contemporaries is battery life. While the Karma Grip and controller have decent stamina, the drone can’t even manage the 20 minutes GoPro claims, usually requiring a return-to-home around the 17 to 18 minute mark. Fully charging the battery takes around an hour. The Mavic Pro can stay airborne for 25 minutes plus, and the battery charges slightly faster, too. Once again, it feels as though the Karma is playing catch-up.

The Karma Drone is simple and easy to fly, even if you’re new to quadcopters. The automatic take-off and landing help, as does the GPS-derived auto stabilisation, but even if you rely solely on the twin thumb sticks, the drone’s responsiveness and zip – particularly when you engage its 35mph sport mode – feel just right. As tech toys go, things don’t get much more enjoyable to use than a drone, and GoPro has succeeded in getting the basics right here.

Having flown it in coastal winds, I can also attest that it’s impressively stable. It’s still susceptible to some buffeting in strong blustery conditions, but that’s to be expected with any lightweight quadcopter – these things have their physical limits.

The gimbal succeeds in keeping the camera level during flight, and combined with the pitch-wheel allows for smooth, steady pans and reveal shots – just what you’d want from a flying video camera. Neither can we complain about the quality of the Hero 5 Black’s image quality: whether it’s the 12MP stills (which can be output as JPG or RAW), the pin-sharp 4K 30fps clips, smoother 60fps Full HD material or that super slow motion 120fps or 240fps footage, it all looks as good as anything from similarly-priced rivals.

The fact that you can unclip this camera (which costs about £400 if purchased separately) and use it in dozens of other ways is also worth remembering, as it’s a skill you won’t find on many rivals, as is the fact that the £279 Karma Grip makes for a respectable handheld gimbal, too. 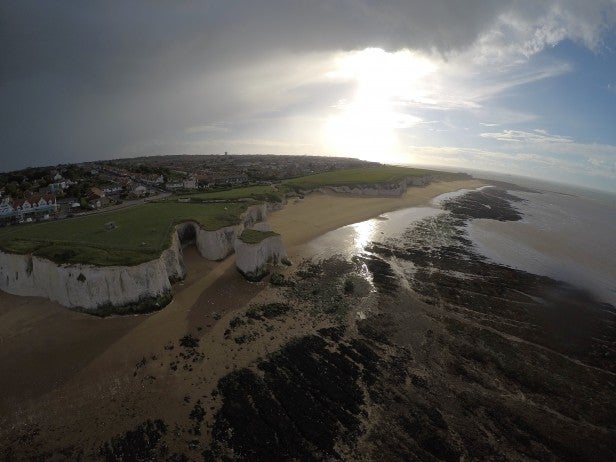 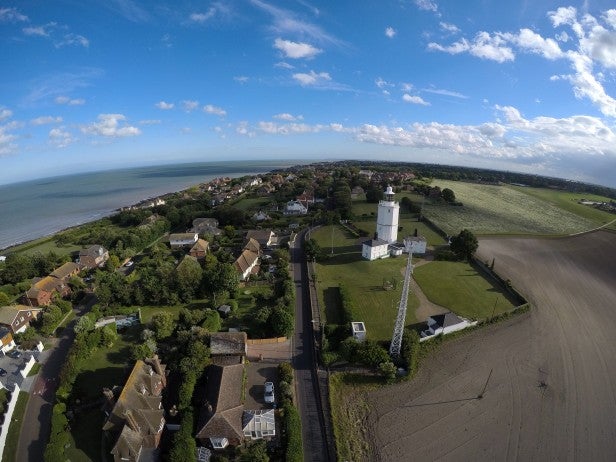 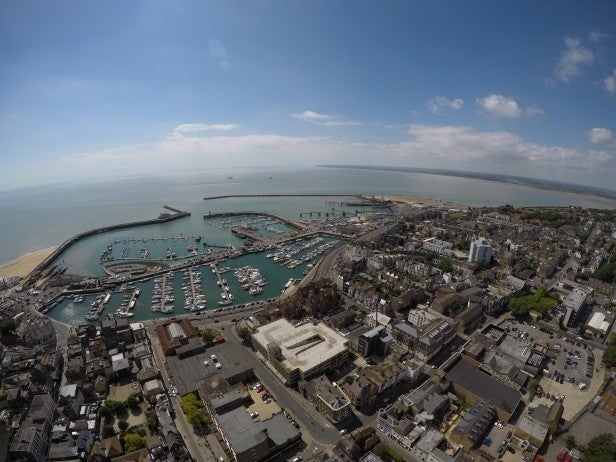 Should I buy the GoPro Karma?

As a complete package, the Karma has definite appeal – particularly for anyone who’s already invested in the GoPro system. Every constituent part of the Karma system works together right out of the box (or bag), and the Drone itself is a joy to fly.

However, when compared to its similarly-priced contemporaries like the DJI Phantom 4 or Mavic Pro, GoPro’s effort comes off as underpowered and under-equipped. With longer battery life, longer range, more safety features and built-in follow modes, it’s clear that DJI’s drones are a long way ahead of GoPro on the technology front.

So while the Karma is a solid first effort, GoPro has some big improvements to make if it wants to receive an unabashed recommendation from us. Right now, a DJI drone is a better bet for most people.

A fun flier that delivers great footage, but technical limitations take the shine off the GoPro Karma