Connecting the GoPro Session to a smartphone is a doddle. Press the little button on the rear for a couple of seconds and the LCD screen springs to life. Press it again and it prompts you to pair. One press of the main button and it’s time to get your smartphone out of your pocket.

You need to go to your Wi-Fi settings, find the Session and pair with it. You then need to set up a password and that’s it – you’re now ready to change settings, use your phone as a viewfinder or control the Hero Session remotely.

Connecting via low-power Bluetooth is also possible. This is useful because it uses a lot less energy than a Wi-Fi connection. Less energy used means a longer battery life for both the Session and your phone. Happy days. 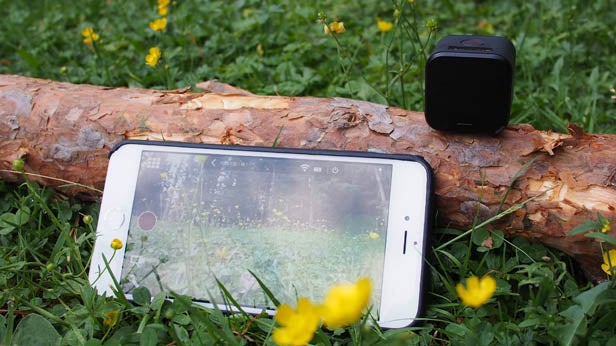 We did find that our iPhone 6 Plus tended to revert back to a known Wi-Fi source regularly. This is a bit of a problem if you’re using the GoPro Hero 4 Session at home or in the office, but let’s face it, the point of this little camera is to be out and about where there are more birds than Wi-Fi signals flying around. This shouldn’t be a big problem for most.

The GoPro app (available on iOS, Android and Windows Phone) lets you tinker with a slew of settings you can’t otherwise get access to.

There’s the obvious ones. Resolution and frames per second range from a top setting of 1,920 x 1,440 (4:3 aspect ratio) to lowly WVGA, while framerates can reach a maximum of 120fps for slow-motion capture in the lowest resolution setting. 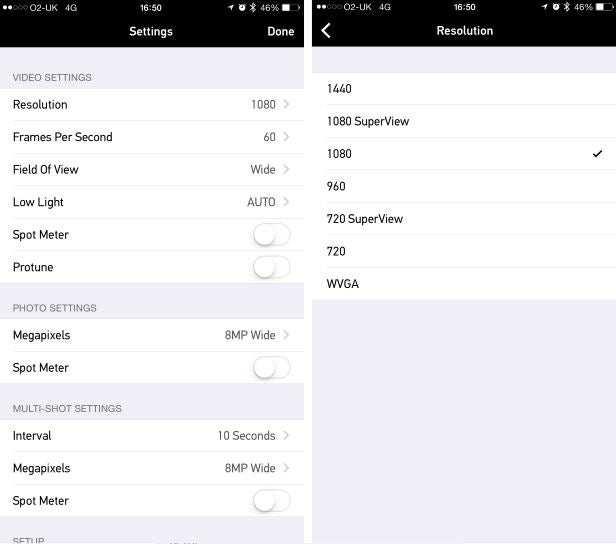 SuperView is a feature that effectively stretches a 4:3 aspect ratio to a widescreen 16:9. Everything in the centre of the shot is kept normal; it’s the edges that are rolled out to fit the width. The idea is that this makes video more impactful – if the things that occur along the edges don’t matter much, that is.

GoPro is well known for its fish-eye effect – the way videos and picture bend round the edges. Otherwise known as barrel distortion, this is caused by the wide field of view (FoV) – 170 degrees is captured in front of the camera. The bending can look a little odd and if you want something with straighter lines you can narrow the field to something less curvey. You can change the FoV to 127 degrees, making the distortion less of an issue, but this option is only available for 1,080 and 720 resolutions.

You can further reduce the fish-eye effect during editing.

The comprehensive level of settings doesn’t end there. GoPro has added an automatic low-light option to the camera that tweaks settings when it’s dark. So, for example, it will reduce the Session’s framerate if it thinks the video is looking too dingy.

Spot meter, on the other hand, tells the Hero 4 Session to set its light levels to what’s dead in front of it and ignore what’s around the periphery. If you want to use it as a dash-cam, for example, you’ll want to keep this on so it keeps the right light settings for everything outside the car.

The final video setting is Protune. This strips away a lot of the bells and whistles that GoPro adds to video, making it easier for video editors to tinker with it in post-production.

While the photo settings can’t hope to eclipse the huge array of video ones, they’re not entirely lacking. You get your usual resolutions to tinker with – 8-megapixel wide-angle being top dog –  5-megapixel medium-angle is the other – as well as changing the time-lapse intervals. These range from a maximum of one shot every half a second to a minimum of one every minute.

GoPro also has its own editing software you can use to create movies with your shots.

GoPro Studio is a reasonably simple editing tool that comes with a few templates to help create exciting videos without much effort at all. There are even some suitably pumped up music tracks included. 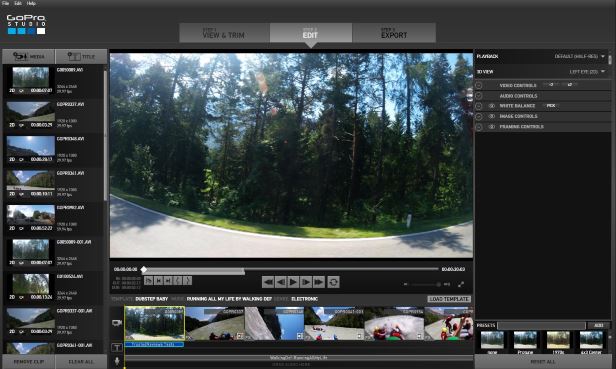 If you’ve never edited video before, there’s a minor learning curve to overcome, but GoPro’s software’s not too tricky to use. Editing is helped by the fact that it notices GoPro footage on your computer and can import it automatically. Creating timelapses is dead simple, too. All you need to do is drag in one image and GoPro Studio does the rest.

You will need a decent computer, though. My three-year-old laptop (with an i7 processor and 8GB RAM) took a while to import and ages to convert video. My chunky and powerful desktop PC, on the other hand, zoomed through edits.