There’s plenty to like about the Google Pixelbook Go; it feels like the first Chromebook from the company that actually stands a chance. It’s certainly well-designed, which in itself is a rarity for a Chromebook, and is a pleasure to use. The £629 starting price feels fair – although, as I mentioned, I can’t attest to the performance of that model. It’s a harder sell as the price starts to creep up over £800, except to those who are perfectly content with Chrome OS.

Google has tried its hand at high-end 2-in-1 Chromebooks. Now, with the Pixelbook Go, it attempts a more affordable model.

Google’s often slap-dash approach to its computing products has left me confused for years; one year it’s doing the Pixelbook, the next a severely underdeveloped tablet version, and now a more conventional Chromebook.

The Pixelbook Go, which was announced alongside the Pixel 4 but has only just come to the UK, is the most basic Chromebook to come directly from Google. There’s no removable screen, nor does it have a starting price close to the £/$1000 mark.

The Google Pixelbook Go is a gloriously designed laptop, but not in the way that most others are. This isn’t a flashy device; in fact, it’s quite the opposite. It doesn’t go overboard with sharp lines, swathes of metal and delicate finishes. Instead, and I don’t mean this in a negative way, it’s basic – but “basic” in a thoroughly thought-out manner.

The metal body has a grippy finish and the bottom has this slightly odd washboard ridged pattern that keeps it firmly set on a table. There’s minimal branding, with only a single “G” on the lid.

My very first laptop was a 2008 black MacBook, and this Pixelbook Go brings back memories of that beautiful machine thanks to the matte-black colour scheme and rounded finish. There’s a pink version available, too; however, at the time of review it isn’t for sale in the UK.

The majority of Chromebooks sport a plastic finish, and even those made out of metal are fairly dull. As such, it’s nice to have the option of a device that’s more enticing. Of course, the Pixelbook Go is priced higher than your run-of-the-mill plastic-clad Chromebook.

It’s light, weighing in at just over a kilo; it’s slim and feels supremely well built. The lid can be lifted open with a single finger – a small quirk, but one that gives the air of a high-end device. 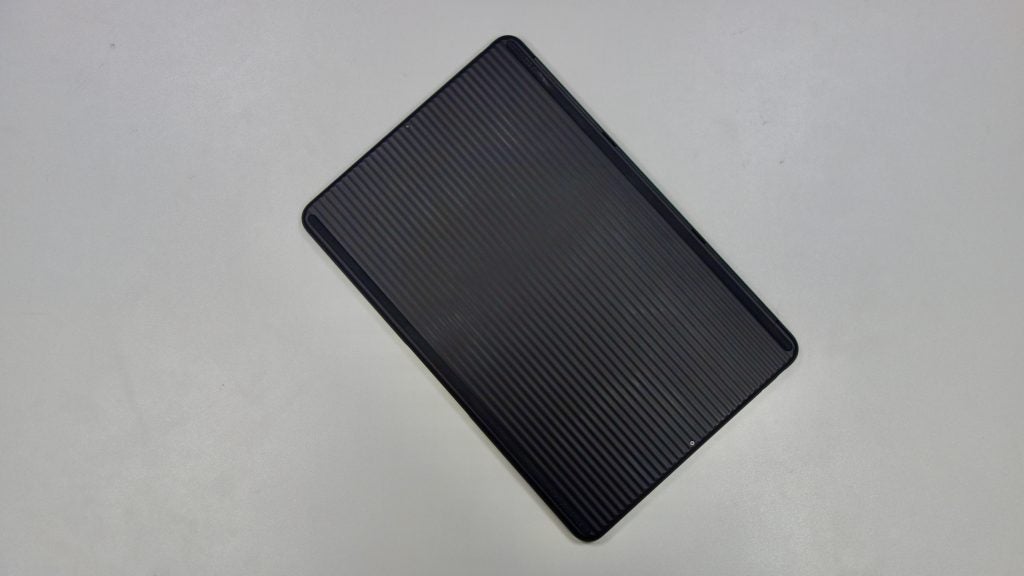 There’s a grippy texture on the bottom

Two USB-C ports sit on either side of the Pixelbook Go, and while both offer support for charging, they’re not Thunderbolt 3 ports. A headphone jack is present, too – but that’s it. Don’t expect a USB-A port or even a microSD card slot to expand the base 64GB storage. This feels a little tight, especially since microSD expansion is commonplace on other Chrome OS machines.

The keyboard is a huge winner, though. It displays plenty of travel and a smooth feel when you’re clacking away. There appears to be plenty of room between keys, even though it’s a fairly compact machine. The keys themselves are quiet on tapping, barely making any sound when you’re typing at speed. After using the overly loud butterfly keys on a MacBook Pro for a few years, they’re certainly welcome. 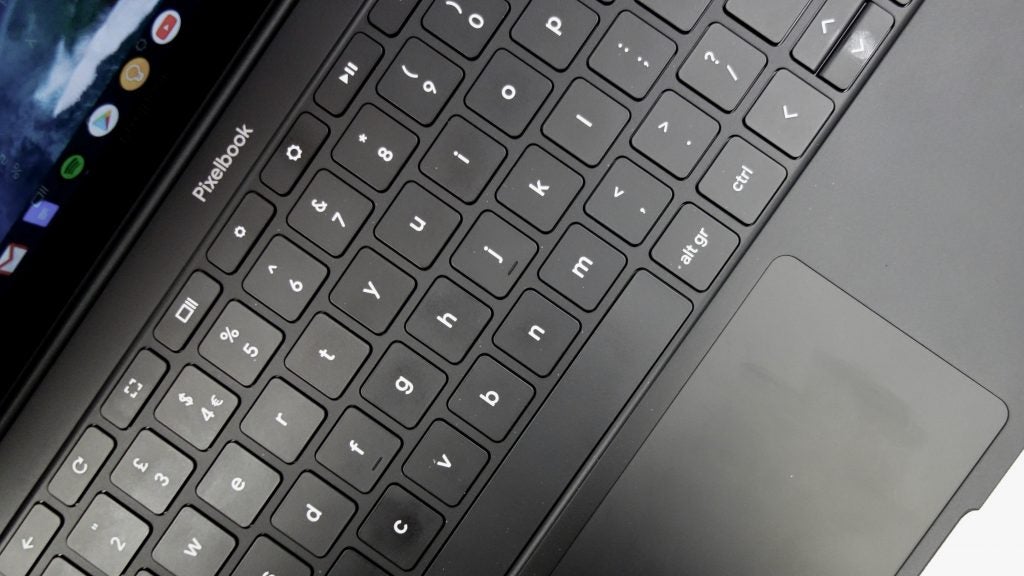 Less impressive about the keyboard is some of the decisions over key placement. Bizarrely, there’s a menu button in the position you’d normally find Caps Lock, for instance – which takes some getting used to. You’ll also find a key to bring the Google Assistant to life.

Below the keyboard you’ll find a responsive, good-sized trackpad, with surprisingly decent speakers either side.

The Pixelbook Go is available in a number of  versions, that range drastically in price from £629/$649 to £1349/$1399. £629/$649 remains fairly pricey for a Chromebook, while the top option seems rather ridiculous when you’re essentially getting the same capabilities.

I’d instantly discount the top-model – I couldn’t recommend anyone spend that much on a Chromebook. The model in for review is the mid-tier Core i5 model, and at £829/$849 even that feels somewhat overpriced. Performance is decent, however – not that I’d expect anything less from a Chromebook with those specs. I haven’t had the opportunity to put the Core m3 model through its paces, but instant thoughts are that £629 feels like a much better price for such a machine.

I’m a heavy Chrome user, and if you’re familiar with Google’s browser then you’ll be well aware that with numerous tabs open, with audio or video streaming in the background, even the snappiest of laptops can start to chug. I’ve had a fairly lag-free experience using the Pixelbook Go. Even with upwards of 20 tabs open and a 1080p YouTube playing, it feels snappy.

ChromeOS – that’s the software the Pixelbook Go runs – has evolved slightly over the past few years, feeling a little less restrictive in the process. While you still can’t run “traditional” downloaded Windows apps such as Word, Photoshop and so on, you can download Android apps from the Play Store and use them offline.

This is great in theory, expanding the capability of the machine. However, it’s a buggy workaround that leaves some apps working fine but others not so much. Apps on my phone that I use on a daily basis, such as Spotify and Pocketcasts, work perfectly. Open Instagram, though, and it’ll take over the entire display – or Audible, which simply refuses to load. It’s this frustration that muddies the experience and makes you feel like you’re using an unfinished product. 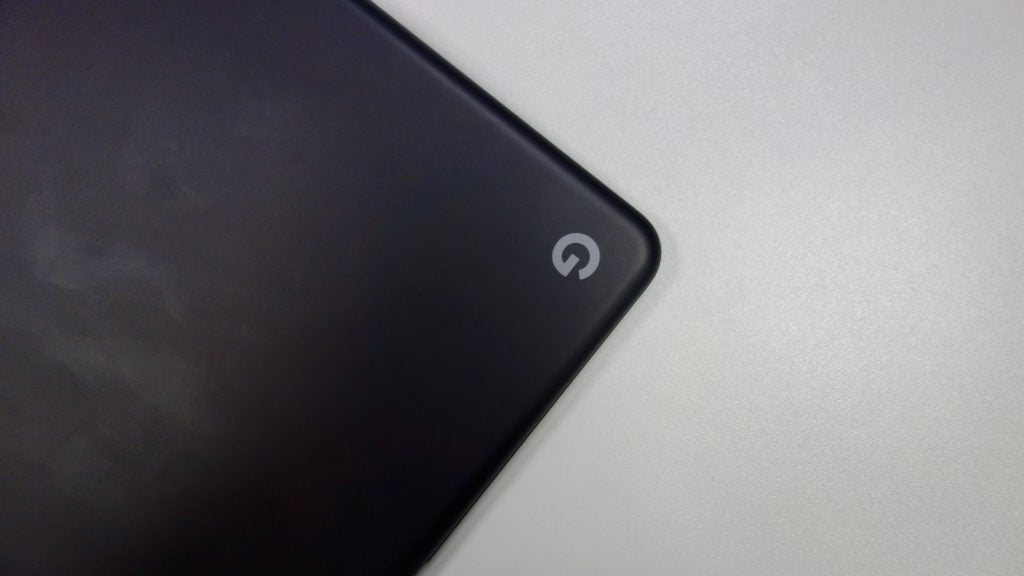 ChromeOS offers some nice integration with Android phones. To offset the disappointing lack of a fingerprint scanner or facial unlock, you can use your phone – in my case, a Pixel 4 – to unlock the Pixelbook. You can also quickly connect to your phone’s internet if you’re out of Wi-Fi range. These features won’t work if you have an iPhone, though.

Chromebooks and ChromeOS aren’t for everyone. If you’re always using Adobe’s software then the Pixelbook Go isn’t for you; you’ll likely be trying to find alternative versions of your favourite apps. Still, I found that 90% of what I do on a daily basis can be done here.

There are two display variants available for the Pixelbook Go: a 1080p LCD and a 4K molecular LCD. Both are 13.3in and offer support for touch. You have to splurge £1329/$1399 to get that 4K version. This is a shame as I’d have much preferred to see it sit on a more mid-tier option, giving the Go an extra standout feature. I haven’t used or seen the 4K version so the following analysis is of the 1080p model.

The display here is good, even if there isn’t anything to really help it stand out. It’s bright enough (although an extra hit would make it more useful for outside use) and crisp, too – both of which I’d expect if spending up to £949/$999. A slightly thinner bezel surrounding the display would have been welcome; the one here is fairly chunky.

YouTube and Netflix videos look decent and colourful, and snaps from my Google Photos library display accurate colours (when compared to a 2017 MacBook Pro). Colour accuracy feels less important for a Chromebook as, currently, you’re unlikely to be using this machine for any “Pro” work that requires support for various gamuts. 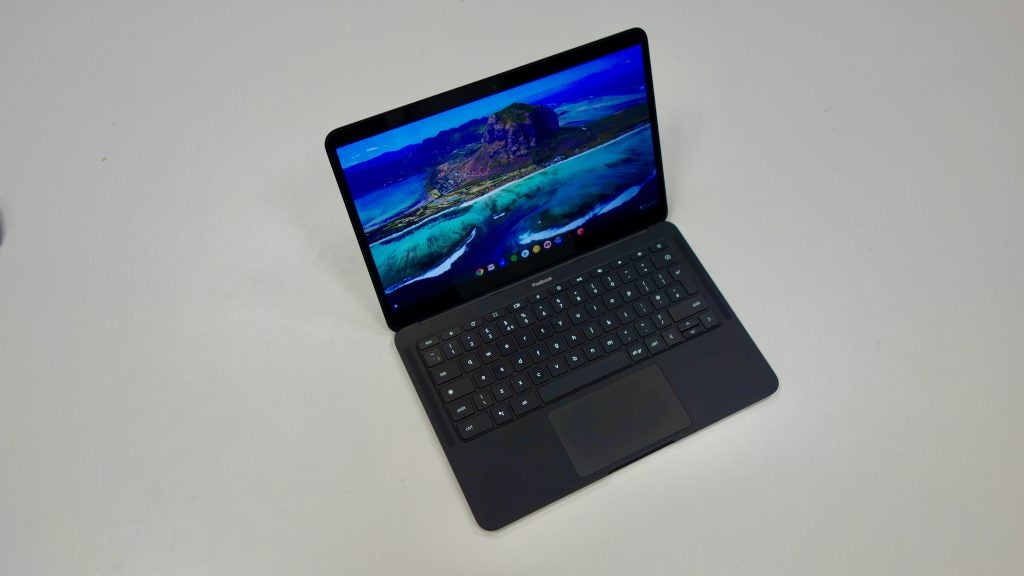 For $999 (no UK release seems planned at the minute) you can get yourself the Samsung Galaxy Chromebook that features an absolutely glorious 4K HDR OLED panel with serious amounts of brightness. The panel on the Pixelbook Go simply can’t compete.

The Pixelbook Go here doesn’t rotate, and neither can you flip it around for use as a tablet – this is purely a laptop. I’m okay with that since it gives an extra hit of sturdiness – but if you’re looking for a machine to also replace a tablet, you might want to look elsewhere.

Battery life on the Pixelbook Go was decent, easily lasting me a full workday (7 to 8 hours) with around 20% remaining. I was comfortable in the knowledge that, if I’d left without my charger, I was unlikely to run out of juice before the end of the day. In our regular battery test, which loops a 1080p video, the Pixelbook Go lasted an impressive 11hrs 45mins – making it ideal for watching media on the go.

Compared to other Chromebooks, the Pixelbook Go doesn’t exactly trounce the competition. You expect better endurance from a machine that’s barely more than a browser.

You can charge the Pixelbook Go via either of its USB-C ports – or, albeit very slowly, with a PD-capable phone charger. You’ll hardly be doing this all the time, but it’s a useful option nonetheless. 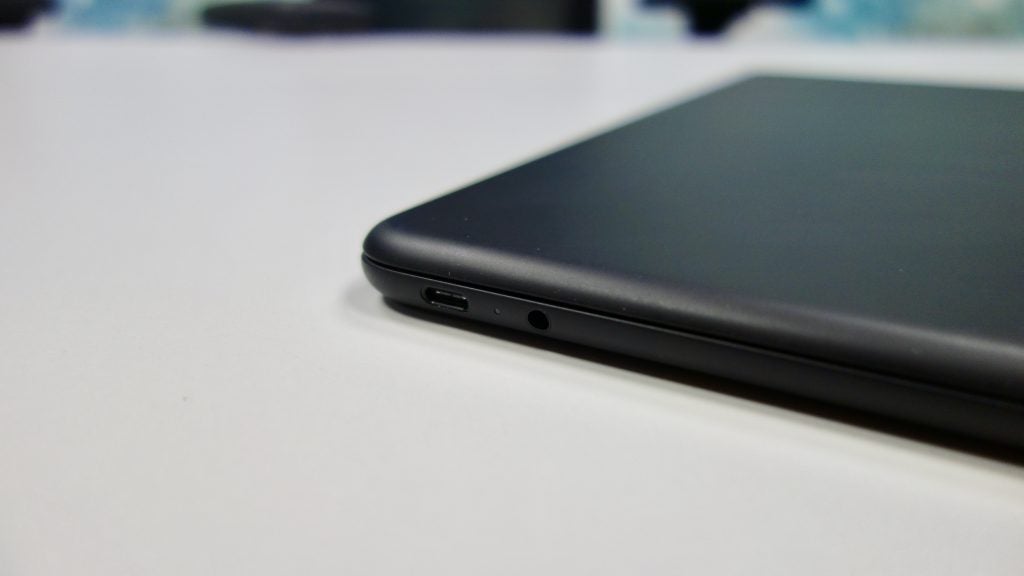 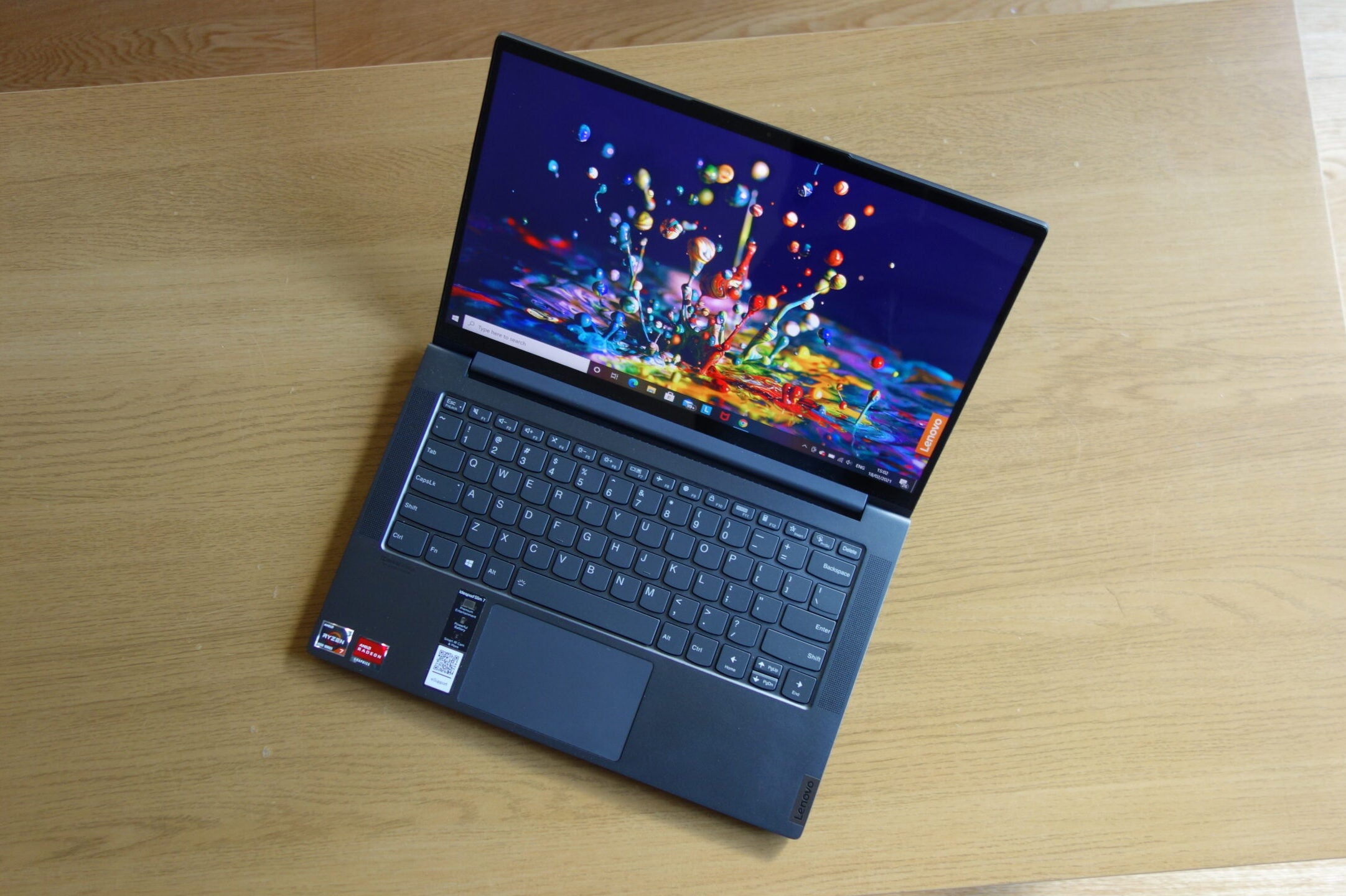 Is the Google PixelBook Go good for programming?

We wouldn’t recommend buying a Chromebook for programming. Look for a Windows laptop with at least 8GB and a i5/i7 Intel Core processor.

Yes, the Google PixelBook Go does have a touchscreen.

Is the Google PixelBook good for college?

The Google PixelBook Go is a suitable laptop for typing out long essays for college/university, although its restrictions on downloading files outside of the app store could potentially prove problematic for research.