As already mentioned, the Nexus 5 is not a perfect music or video jukebox – especially not the 16GB version – because there’s just not enough storage potential. Unless you go down the streaming route with a Spotify, Netflix or similar subscription, you’re going to be limited to the internal storage. And with a 16GB phone, only 12.5GB is accessible.

Still determined to make your Nexus 5 a media powerhouse? Transferring files is simple, as the internal memory shows up as a drive when connected to a computer.

As with the rest of the Nexus 5, the phone comes with the bog-standard Google media apps only – Play Music and Play Movies.

Both apps try and get you to sign up for, or buy, Google’s own content. They’re not pure media player apps, but the music interface in particular is strong. It looks good, it runs fast.

The Nexus 5 doesn’t offer as strong codec support as a Samsung Galaxy S4, though. You’re restricted to the native support offered by Android 4.4 unless you use a good third-party player. Our usual test app, MxPlayer, isn’t currently available for Android 4.4 devices (this is likely to be sorted within days/weeks). 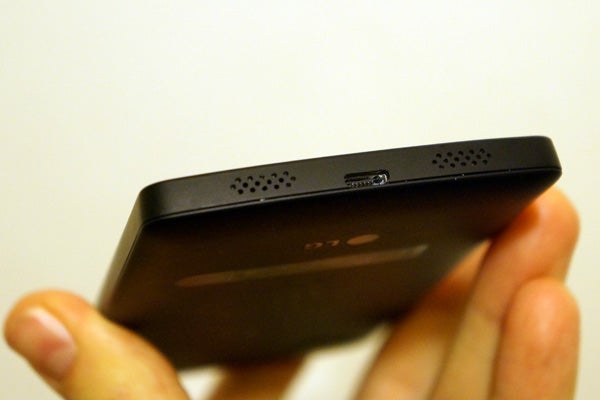 One element of the Google Nexus 5 that hasn’t been given a good deal of attention is the internal speaker. It’s a pretty standard mono affair that doesn’t get close to matching the HTC One in terms of sound quality, sound dispersal or volume. It is not terrible either, with solid enough output to make the back of the phone vibrate (a not entirely positive side effect). At top volume, the speaker does start to crackle with some content, though.

Its design is also a bit misleading. There are two grilles on the bottom edge of the phone, but like iPhone 5S the sound only comes out of one of them. The, we assume, contains the microphone, either that or it’s there just for symmetry’s sake. Unfortunately, also like the iPhone, this means the sound is easy to block off when playing a game.

Like almost all top-end phones these days, the Google Nexus 5 offers 4G support. There are two different versions of the phone, designed for different markets, meaning you don’t get 100 per cent worldwide coverage, but that should not bother most people.

Other wireless connectivity is pretty advanced, too. You get Wi-Fi that supports the ac standard – which has only recently become common in routers – as well as NFC, Bluetooth 4.0 (aka Bluetooth Smart), Miracast and all the Android standards such as GPS and HSPA 3G mobile internet.

We miss out on some of the usefulness of NFC in the UK, as Google Wallet has not launched here yet, but the Nexus 5 is undeniably fully-featured.

Looking back to hardware connectivity, the microUSB port on the bottom of the Nexus 5 is actually a SlimPort – also seen in the Nexus 4. It’s a rival to MHL, and lets you output video from the phone using the right adapter. As usual, you don’t get one in the box, but you can find one online for around £20.