Thanks to the Android 4.4.2 update, there have been significant improvements in the performance of the Nexus 5’s camera. Basic image quality remains quite similar – the Nexus 5 is a middleweight at best – but the camera is now far more enjoyable to use.

The camera app is quicker to load for starters. This sounds like a minor upgrade, but it makes a big difference when you’re out and trying to capture quick moments with your mobile.

Shot-to-shot speeds are much improved too, both in the standard shooting mode and the HDR mode. Standard shots have moved from about two seconds per capture to about 0.5 seconds when you’re trying to shoot as fast as possible. 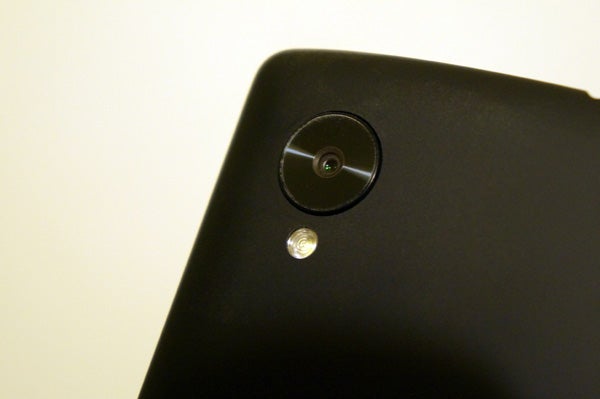 HDR speed has changed from ‘incredibly slow’ to a perfectly fine pace, of about one shot per two seconds. The approach to HDR has changed quite dramatically. There’s now a progress bar that shows you how long it’ll be before you regain access to your camera, and following this the processing of the HDR file is done behind the scenes, leaving you to take another shot while that’s happening.

We know this because if you switch to the gallery just after taking the shot, the photo is greyed out, and displays its own progress bar. This processing is a key part of how HDR works – it stands for high dynamic range and is a mode that merges multiple exposures to produce photos with more detail in light and dark areas.

Not all the issues we complained about have changed, though. In the standard stills mode, the Nexus 5 has a strong tendency to meter its exposure based on the brightness level of the sky rather than the foreground when shooting landscape shots. This can be solved by manually selecting the foreground with the camera reticule, but it’s something that ensures the Nexus 5 still doesn’t have anything approaching the accessibility of the iPhone 5S camera. However, it’s a big improvement that makes the Nexus 5 camera more fun to use.

Carry on reading our original Nexus 5 camera review below to find out more about its specs, its general image performance – and to get a look at more samples.

The Google Nexus 5 has a camera that mostly matches the Nexus 4 in terms of pure specs. It has an 8-megapixel 1/3.2-inch sensor and an f/2.5 lens. When the Nexus 4 camera was nothing to shout about, we were preparing ourselves for disappointment. But the Nexus 5 offers some pretty good results in practice.

Detail capture and exposure
The Nexus 5’s most serious image quality issue is exposure metering. It tends to blow out bright areas, something that rival iPhones simply don’t do (generally speaking).

Detail capture is roughly on-par with the iPhone 5S, as you would hope given the use of similar-resolution sensors, but the exposure issue leads to much more problematic images in scenes with strong light sources. There’s also significant purple fringing around light sources in these sorts of trickier scenes, to the extent that it’s visible without significant zooming into shots, when viewed on a computer.

We were left with both under- and overexposed shots during testing, suggesting that whatever imaging brain is powering the Nexus 5 could do with an update or two. Dynamic range in normal photos is pretty poor too. 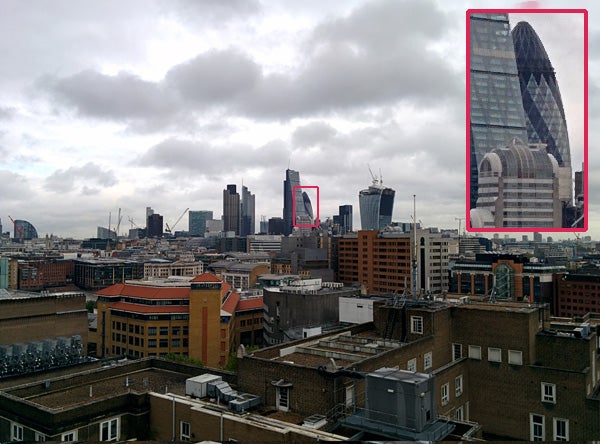 Detail capture is very good, shown in the fine detail of the pixel-crop above

1:1 pixel crops from the competition

HDR
However, these exposure issues can mostly be solved using the generally excellent HDR mode of the Nexus 5. It’s a demonstration of what mobile phone HDR should be about – i.e. compensating for the technical limitations of a phone camera, not producing shots that look like they’re inspired by Disney’s Fantasia, with every object glowing as if the viewer had just dropped a tab of acid.

The results of the HDR mode do vary depending on the scene, but generally they significantly increase detail in shadow areas, reduce overexposure and even improve white balance/colour reproduction noticeably.

Here are some demos of HDR in action: 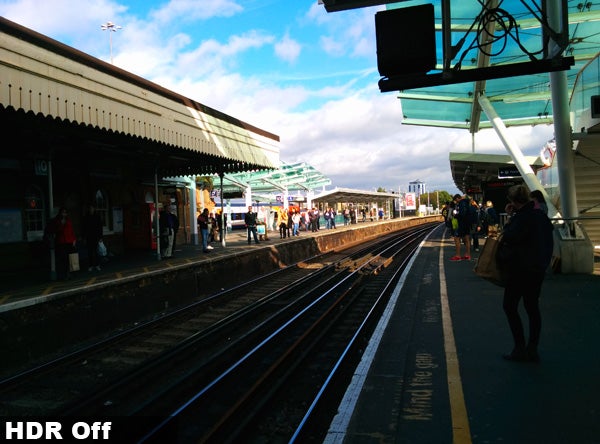 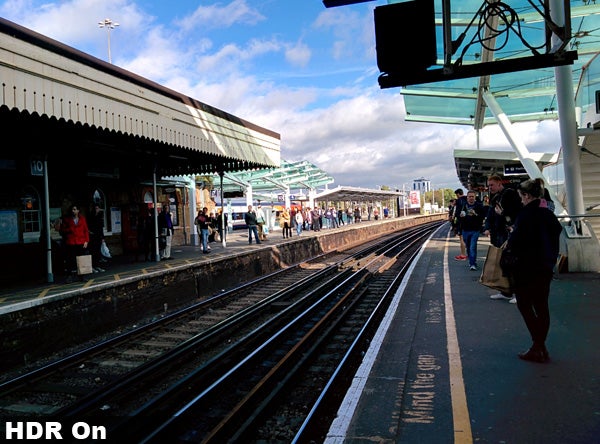 Not only is there much more shadow detail in the HDR pic, the mode has also made the sky look more natural – turning it from a greeny shade into a bluer one. 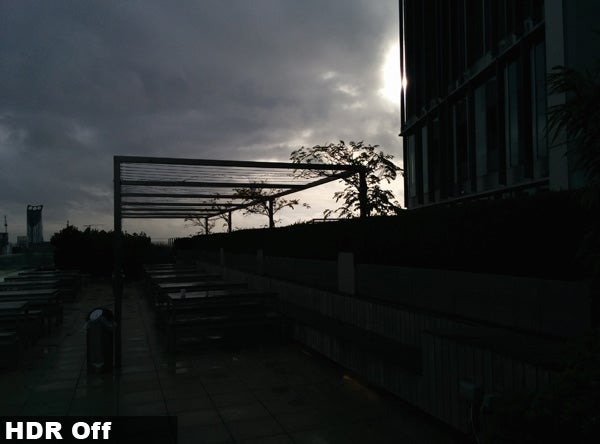 Here the sky is used as the exposure metering point, which is why it is quite so underexposed. Without using HDR mode, you need to choose between a severely underexposed foreground or an overexposed sky. 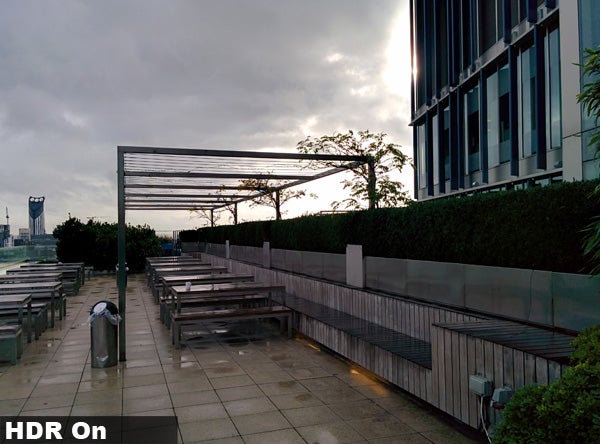 HDR solves the issue. The photo now appears fairly lively, with only minor overexposed areas where the sun peeks from behind the building.

Performance
We would suggest using the HDR mode 24/7 when not shooting action, but speed is a significant issue. At the best of times, the Nexus 5 is not the fastest camera around.

Upon pressing the shutter button, the phone both focuses and takes a shot, and there’s about a two second pause between standard shots – longer if you’re shooting in poor lighting. With the HDR mode engaged, this gap is increased to 3.5-4 seconds – about as bad as the Lumia 1020, which has to cram a 41-megapixel image down to a 5-megapixel file. It has a pretty good excuse, the Nexus 5 doesn’t.

With an iPhone you’re looking at about a quarter of a second between standard shots and 1.5-2 seconds between HDR shots. There are reasons beyond image quality why iPhones are fun to shoot with.

It works. What OIS lets the Nexus 5 do is to increase exposure time without resulting in blurred images caused by the natural judder of your hand. Longer exposure time equals more light, which equals less noise.

To test low-light performance we took the Nexus 5 to a concert, and compared it to the iPhone 5C, which has similar specs (1/3.2 sensor, f/2.4 lens) but no stabilisation. 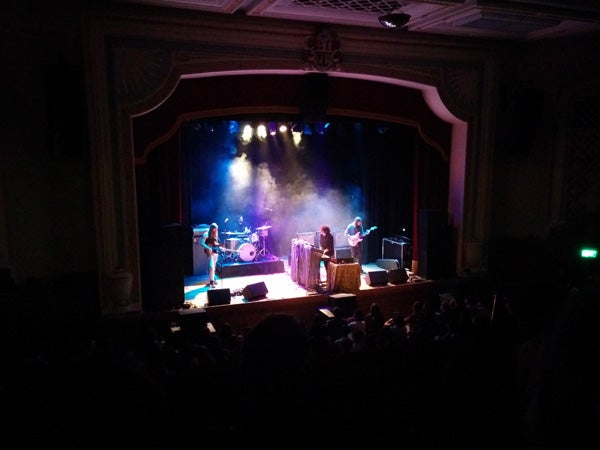 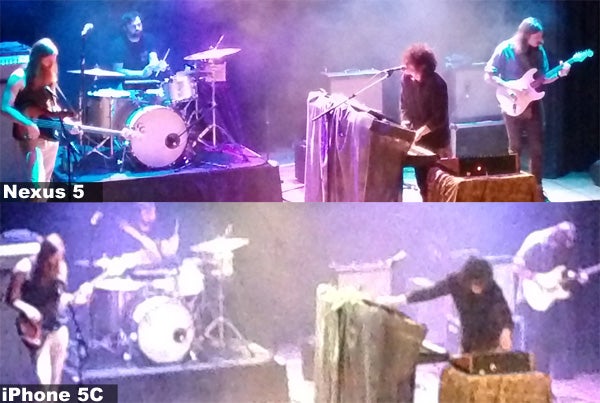 The results are clear. The Nexus 5 produces far superior photos in this situation, with much more detail and far greater clarity.

Looking at the EXIF information that’s a part of any standard photo, and we can see why. In poor lighting, the iPhone 5C shoots at ISO 2500 with a 1/16 second exposure. In the same conditions, the Nexus 5 uses a much longer 1/6 second exposure and a curiously exact ISO 1624 – lower sensitivity.

It can afford to lengthen the exposure (and therefore reduce ISO) because of optical image stabilisation.

Flash
The Nexus 5 drops down to earth a bit with its single-LED flash. It’s nothing special, and has the usual sort of image-skewing effects that make us want to turn it off whenever possible, given the phone’s use of OIS.

However, it does at least use the LED as a focusing aid when the flash is engaged.

Macro and Depth of Field
The Nexus 5 is able to produce some half-decent macro-style shots thanks to its reasonable detail retrieval, but it has no special skills in this field. It’ll focus at around 15cm distance, and the f/2.5 lens isn’t capable of any particularly impressive depth of field effects. 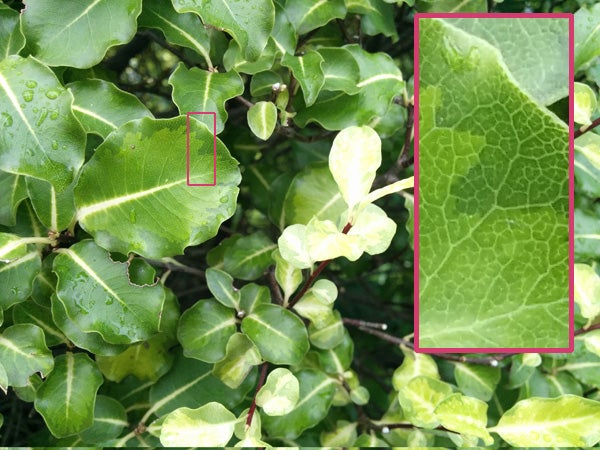 A few mobile phone cameras, including the Samsung Galaxy Note 3, have started to offer 4K video capture, but the Nexus 5 is stuck with more conventional 1080p. However, it too uses the optical image stabilisation that had such a positive effect on low-light performance. Here it quite literally stabilises the image, doing a good job of making handheld footage look less juddery.

Other phones manage fairly well with software video stabilisation, though. You also miss out on HDR video recording and slow/fast motion here – all three are either useful or fun. The Nexus 5 does offer time lapse video recording, though, which shoots a frame at pre-set intervals – such as every half-second. We’d rather have slo-mo, but it’s hardly a show-stopping issue.

The Nexus 5 has a much better front camera than the Nexus 4. It’s a 1.3-megapixel camera. Once again that’s the same resolution used in the Nexus 4, but the results are simply much better this time around – greater detail, and it is able to cope much better with in-frame light sources.

The camera also has a slightly longer focal length than most front cameras, meaning you don’t need to hold it as close to get a good selfie angle. Of course, that may not help if you’re trying to get a bunch of friends in the photo as well. 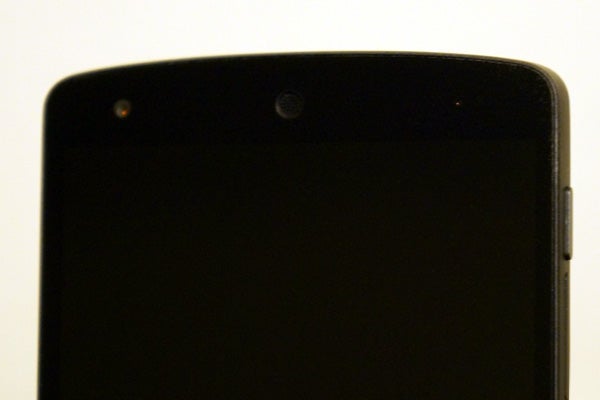 As with all of the Nexus 5’s software elements, the phone uses the bog-standard Android 4.4 camera app. It’s a slightly quirky, gesture-based affair that’s one of the trickier parts of the system to get used to.

Navigation of the menu system isn’t intuitive enough, especially as it doesn’t give you control beyond that of any other phone.

You do get a few neat extra modes, though. Photosphere lets you take a 360-degree view of your surroundings – a fun extra to experiment with – and panorama is a more conventional (and more easily share-able) pan shot. The quality of the latter is nothing to get too excited about, though – it’s not full-res like the iPhone panorama.