The Google Nexus 5 is the first phone to launch with Android 4.4 KitKat. It’s also one of just a few devices that will offer the software as Google intended. Almost every other phone these days has custom interface that adds a bunch of features and alters, in a handful of small ways, what the phone feels like to use.

It’s a real pity, because in its pure form, Android 4.4 is a very coherent, easy-to-use system. These days it doesn’t really have many more potentially-confusing dangling bits than the latest version of the iPhone software, iOS 7.

Like iOS 7,  Android 4.4 KitKat makes the system look slightly more friendly and, at a push, cartoony. Some of the last remnants of visual stuffiness – unnecessary borders and rigid lines that aren’t really effective visual punctuation – have gone. More menus are hidden until you need them, making Android feel less cluttered than ever. 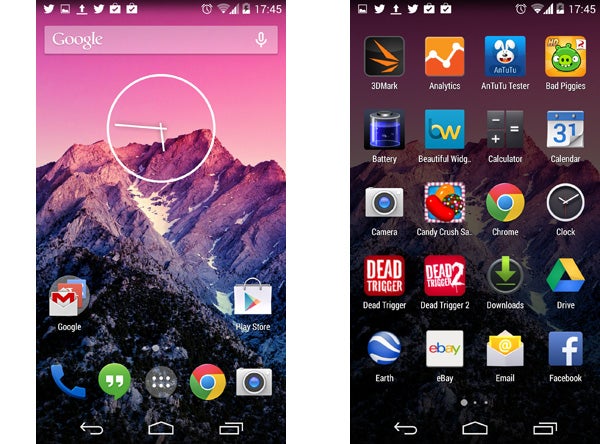 These are similar changes HTC made in its own Sense 5.0 UI, introduced in the excellent HTC One.

There’s not as much customisation as you get with some other Android phones, though. For example, you can’t choose between different screen transitions, or how long these animations take. Is that an unnecessary extra? Probably.

Google has fine-tuned the options it makes available, including only those that are truly worthwhile in the Nexus 5. A good example is font size – You can pick five sizes between ‘small’ and ‘huge’, and it affects fonts throughout the phone’s UI – in some phones it only affects the menus, not the home screen.

Android 4.4 is a refreshing, pared-back approach to Android. And we think it is the right approach.

The way you interact with Android hasn’t changed either, meaning you can add in plenty of the missing customisation with third-party apps if you feel the need. 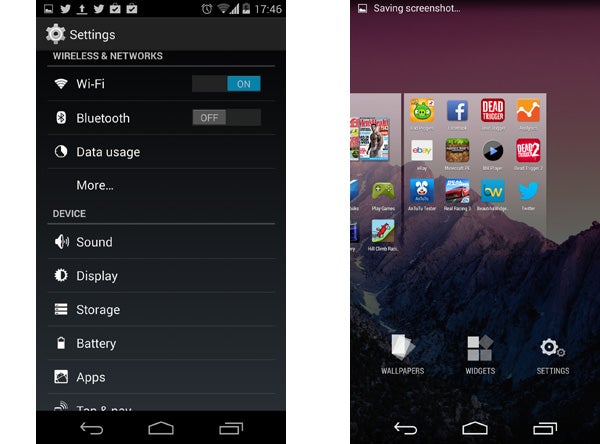 Other than a slightly new look, the Nexus 5’s Android 4.4 software also sees Google start to squish together some of its mobile and desktop services/apps. The most obvious of these is Hangouts.

Google Hangouts is a chat interface for Google Plus on a computer, but in the Nexus 5 it’s also where all your SMS messages end up. Good old fashioned text messages and mobile internet-powered web chats are virtually the same thing in the Nexus 5.

It’s Google’s way to try and make people use its own services all the more – but it’s executed simply enough to stop it being confusing, beyond the new name. You can also change the default SMS app in the Settings menu (more are available from Google Play) if you really don’t get on with Hangouts.

Most of Google’s other core Android apps are likely familiar to you – Maps, Mail, Calendar and Drive are all well-established bits of software that will fit like well-worn shoes if you’ve used Android in the past. 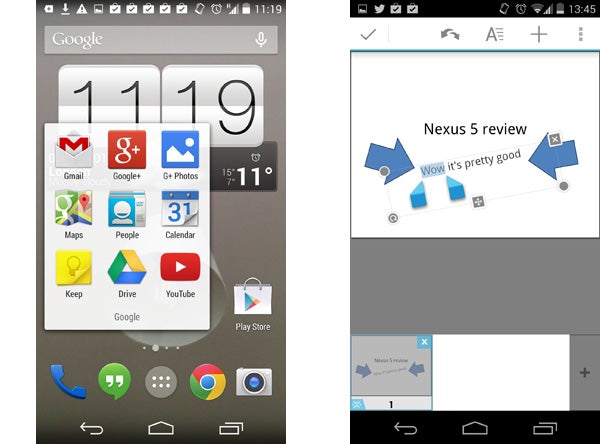 There are a a few much newer additions, though. Google Keep was introduced in March 2013, and is a simple note-taking tool that stashes all your post-its on your Drive account. It lets you attach audio clips and pictures too, and its interface is beautifully simple. It’s designed for the everyday user, not the hardcore note-taking obsessive, but makes a good Evernote-replacer for most people.

What’s more interesting is the inclusion of QuickOffice, a definite stab at Microsoft and its inclusion of Office in Windows Phone. It’s an office suite that lets you create and edit text documents, spreadsheets and presentations directly from the Nexus 5 – and save them directly to Google Drive, or the internal memory. Google is offering a direct rival for the mobile versions of Word, Excel and Powerpoint here. And while still a tiny bit fiddly on a phone, they are – like much of Android 4.4 – pretty intuitive.

The Nexus 5’s Android 4.4 also tries to push Google Now. It’s a service that pre-empts information you might ask for, such as weather where you live, and the routes back home from where you are.

This is the only phone that lets you zoom straight to Google Now just by saying ‘Ok Google’ from the home screen. However, it’s not a feature we could get to work, despite having offline recognition installed. Oh well.

New optimisations aside, the Nexus 5 offers all the apps and games scope of any other Android phone. You get full access to the Google Play app store, and both the 16GB and 32GB models give you space for loads content. However, this will soon get eaten up if you install lots of data-heavy 3D games, or fill the phone up with movies. Unlike a Samsung Galaxy S4, you can’t increase internal memory here.

General performance of the Nexus 5 is excellent. Navigation is super-quick, with lag-free transitions thanks to both the optimisations of Android 4.4 and the power of the Nexus 5. We did experience a few little glitches in our testing, but these related mostly to third-party apps (unavoidable) and the camera app (likely to be ironed out in sequential updates).

The Google Nexus 5 uses a Snapdragon 800 CPU, on par with the top new Android phones of late 2013, and notably faster than the Galaxy S4.

The Snapdragon 800 used here is a quad-core 2.27GHz processor with 2GB of RAM. Given the £300 asking price of the Nexus 5, that’s a cracking spec, matching the Sony Xperia Z1 and LG G2.

We tried a host of high-end 3D action games to see if the Nexus 5 would trip up, but it did not. Real Racing 3, Dead Trigger 2 and Epic Citadel all ran perfectly. If a current game doesn’t run well, it’s because of poor optimisation on the developer’s part, not a failing of the Nexus 5.

Benchmarks once again prove that the new Nexus offers stellar value for money. With 17,757 in the 3D Mark Unlimited test, 2,715 in Geekbench (907 single-core), 803ms in Sunspider and 801 in the Peacekeeper test, the Nexus 5 offers performance very close to the Xperia Z1 – a phone that costs £200 more.

It’s not as powerful as an iPhone 5S, but for the time being you can’t get a more powerful Android phone with good game developer support. The latest Intel Atom mobile processors are a good deal faster, but as they’re hardly used in any phones, developers don’t tend to optimise for them specifically.

In short, the Nexus 5 rules for gaming.