But even the smartest discovery system becomes a fairly tiresome task if it has to be repeated endlessly. Which is why Google is emphasising the last of the major upgrades to its new Maps: learning. Instantly this will cause privacy concerns, but the theory is when you are logged into Google services and use Google Maps it will learn your preferences.

As such, regularly searched for places become ‘landmarks’ on your map and London is laid out for you by your favourite places, making new searches easier to put into geographical context. In this way, everyone’s map will be different, just like the one below.

In addition, the more you use Maps the more it learns. Search for a town or city and Maps will highlight things you might enjoy based on your past likes and dislikes before you even start a formal search. Scary yes, but also potentially brilliant.

So,what is Google going to do with all this data? As Google I/O 2013 demonstrated: it is going to integrate tightly into other core services.

As such your reviews become part of Google Plus, search histories are integrated into Google Now to predict behavioural patterns, and Google Search will take into account your Map information. This adds convenience (you can search for restaurants in an area based solely on Google Plus friends’ recommendations), but also control.

Looking at the future, surely the ability to book tables and check-in will soon follow to give Google another weapon to attack the competition?

Despite all this the Google Maps 2013 does have its flaws. Aside from the ones already mentioned, load times are notably slower than the current version. This could well be because we are using a beta product, but given Chrome and Gmail have also become more sluggish in recent times we hope Google isn’t sacrificing its famous focus on speed in favour of bloat. 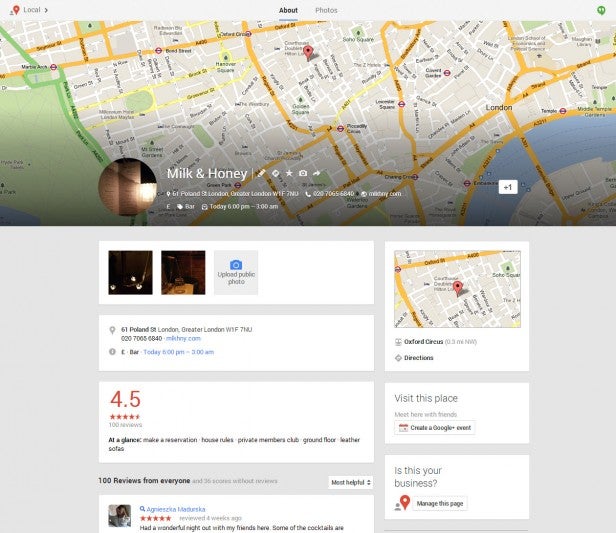 It would also be nice to be able to move the search bar from its locked position in the top left corner of the screen, and there are surprisingly no ways to share places directly from the map without going to a dedicated page (above) for that place. This will surely change. In fact, for all its focus on putting everything on the map itself, the new Google Maps still has a tendency to drag you off to a separate page or even browser tab when you want more information.

Elsewhere print and link options to your exact view of the map are missing at the time of publication.

We may be previewing a beta product and privacy questions will be raised, but the new Google Maps is undoubtedly a huge step up from what was already the best mapping service available.

It has also made us crave the new mobile versions of Google Maps, as we have fast become reliant on features unavailable to us on the move. We might face a wait, though, as Google has yet to indicate when the new desktop and mobile Google Maps will roll out for everyone. Until then we advise you request an invite.

For us Google Maps is now comfortably the company’s best product and it is hard to see how competitors who were already significantly behind can hope to catch up. The exciting bit is there is now huge pressure for them to try…

Next, read why Apple should fear the new, ruthless Google