Goodmans has been thrust into the limelight recently thanks to the launch of its first Freesat receivers, but it’s worth remembering that the company has been offering subscription-free TV for years – albeit in the digital terrestrial realm. One of its latest Freeview products is the GHD2521F2, a twin-tuner PVR equipped with a 250GB hard-disk that can hold up to 120 hours of programmes, and crucially it’s Freeview Playback compliant, which means you get nifty features like series recording.


Despite the unit’s budget background, its design is surprisingly attractive. OK, the mirrored front panel is so five years ago, but it still provides the sort of pizzazz that you don’t normally get from this type of product. The sloping fascia is another nice touch, and Goodmans keeps it relatively uncluttered with only a few essential buttons adorning the front.

On the back you’ll find two SCART outputs, enabling you to hook it up simultaneously to a TV and an external recorder (in case you want to copy anything stored on the hard-disk). The TV SCART offers a choice of RGB or composite output, but the VCR socket only provides scruffy-looking composite, which could cause problems if your DVD recorder accepts RGB and you want the best-possible quality for your archived recordings.


From the outset it’s clear that the GHD2521F2 is designed with ease of use in mind. When you first boot up the unit, you’re greeted by an onscreen prompt asking you to check the aerial and input the correct aspect ratio of your TV. This is followed by an automatic channel scan, which finds and sorts the 88 TV and radio stations quickly and efficiently.


Once it’s finished you can rummage around in the setup menu to make those vital tweaks, and here we find another example of the unit’s user friendliness – the setup menu options are labelled using practical phrases like ‘Record a new program’ (”sic”) or ‘Play back a recorded program’. This helps less experienced users find the function they’re looking for without having to decode any confusing jargon. The menu is also laid out with an eye for simplicity, using a clear structure and large text within blue boxes that really stand out. Among the options on offer is the ability to change the EPG layout, change the menu colour scheme or select the appropriate video output (RGB or composite video).

We’re also impressed by the responsiveness of the menu system, which allows you to cruise around and make changes without any frustrating pauses, but sadly it’s not quite as cooperative when it comes to changing channels – the screen stays black for just a fraction too long when flicking between channels on different multiplexes.


The remote’s design is fine on the whole, with conveniently placed menu and channel-change controls, although some of the frequently used keys (like Text, Channel List and the playback controls) are buried within a cluster of similar-looking keys towards the bottom of the handset.

The digital TV features are intelligently integrated and attractively presented. Most impressive is the onscreen channel guide, which is superimposed over the programme you’re watching and allows you to browse the next six hours of programmes on any channel without having to enter the main EPG. But if you do want to investigate what’s on in the coming week, then the full EPG is similarly well-designed, using a familiar timeline layout. Live TV and the current programme synopsis are displayed at the top, and at the bottom it lists all the available options, and even shows you a picture of the button you need to press and how much space is left on the hard-disk. 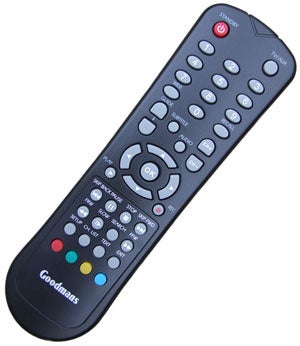 When setting a timer recording from the EPG (simply by highlighting the programme and pressing ‘OK’) you’re presented with the option of recording a single programme or the entire series – one of the features offered by Freeview Playback. In fact, helpful info boxes pop up all over the place, letting you know when programmes are about to start or when recordings clash. Recorded programmes are stored in the Video Library, which is logically designed but can only be accessed via the setup menu – ideally it should have been given its own button on the remote.


The inclusion of twin Freeview tuners means you can record one channel while watching another, or record two programmes on different channels – but unlike some of the more expensive PVRs on the market you can’t record two and watch a third (a reminder box pops up when you try). And although you can pause live TV, the buffer memory only kicks in when you press pause, which means you can’t rewind live TV as you can on Sky+, which is a shame.

When it comes to picture quality, the GHD2521F2 really delivers the goods. Live Freeview TV pictures are sharp and vivid with smooth motion and a low amount of pixel noise. We watched a football match from Euro 2008 and the Goodmans easily keeps pace with the fast movement of the players and the ball without lapsing into a mess of blocks. Edges are clean and bleed-free, keeping the bright blue of the Italian team’s shirts tightly contained, while the discernable figures in the crowd reveal some decent detail reproduction. 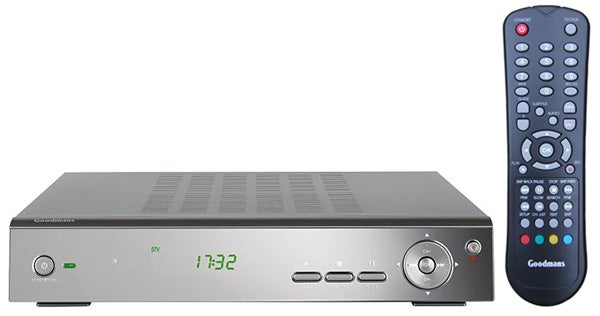 The good news is that recorded picture quality looks exactly the same as the live broadcast, and because there’s only one recording quality setting, you don’t have to worry about changing the recording mode – everything is recorded in the best possible quality. Provided your Freeview reception is strong, the robust tuner locks into the signal and doesn’t fall foul of any break-up or flickering (as we found occasionally on the 160GB version).


Sonically the unit does a solid job, piping clean and audio stereo sound down the SCART cable to our TV. Using the coaxial digital audio output in conjunction with a good Pro Logic II amplifier injects even more excitement into the proceedings, with the pseudo surround effect giving the Euro 2008 football coverage a greater atmosphere.


Just like its 160GB counterpart, the GHD2521F2 is an attractive, easy to use and nicely priced hard-disk recorder that offers tremendous live and recorded picture quality. It’s a little less flexible than pricier PVRs from the likes of Topfield and Humax, but considering the price it would be churlish to complain. The most important thing is that it offers a hassle-free means of watching and recording free digital TV, with all the benefits of Freeview Playback thrown in – and you can’t ask for much more than that.